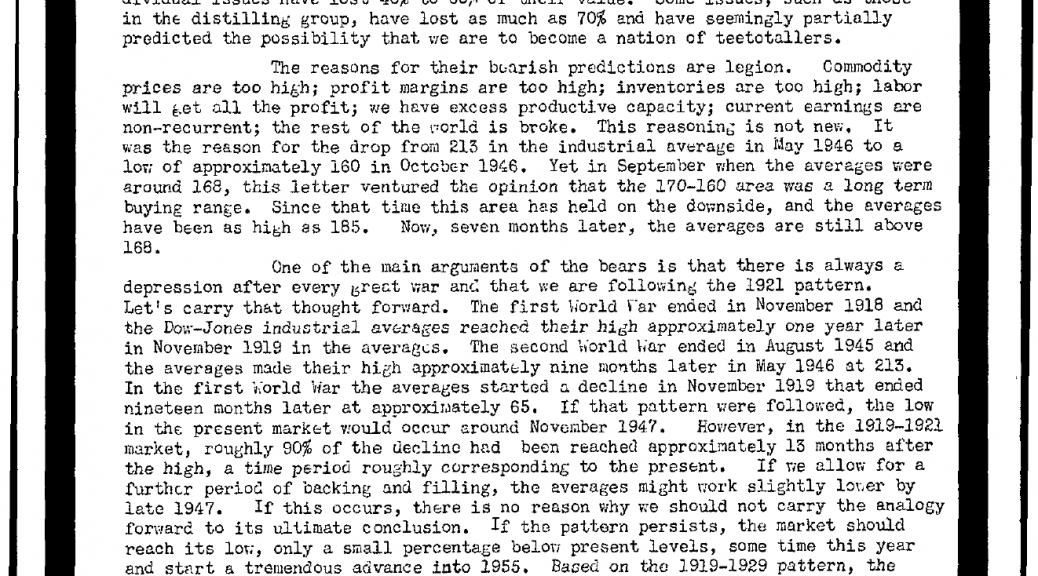 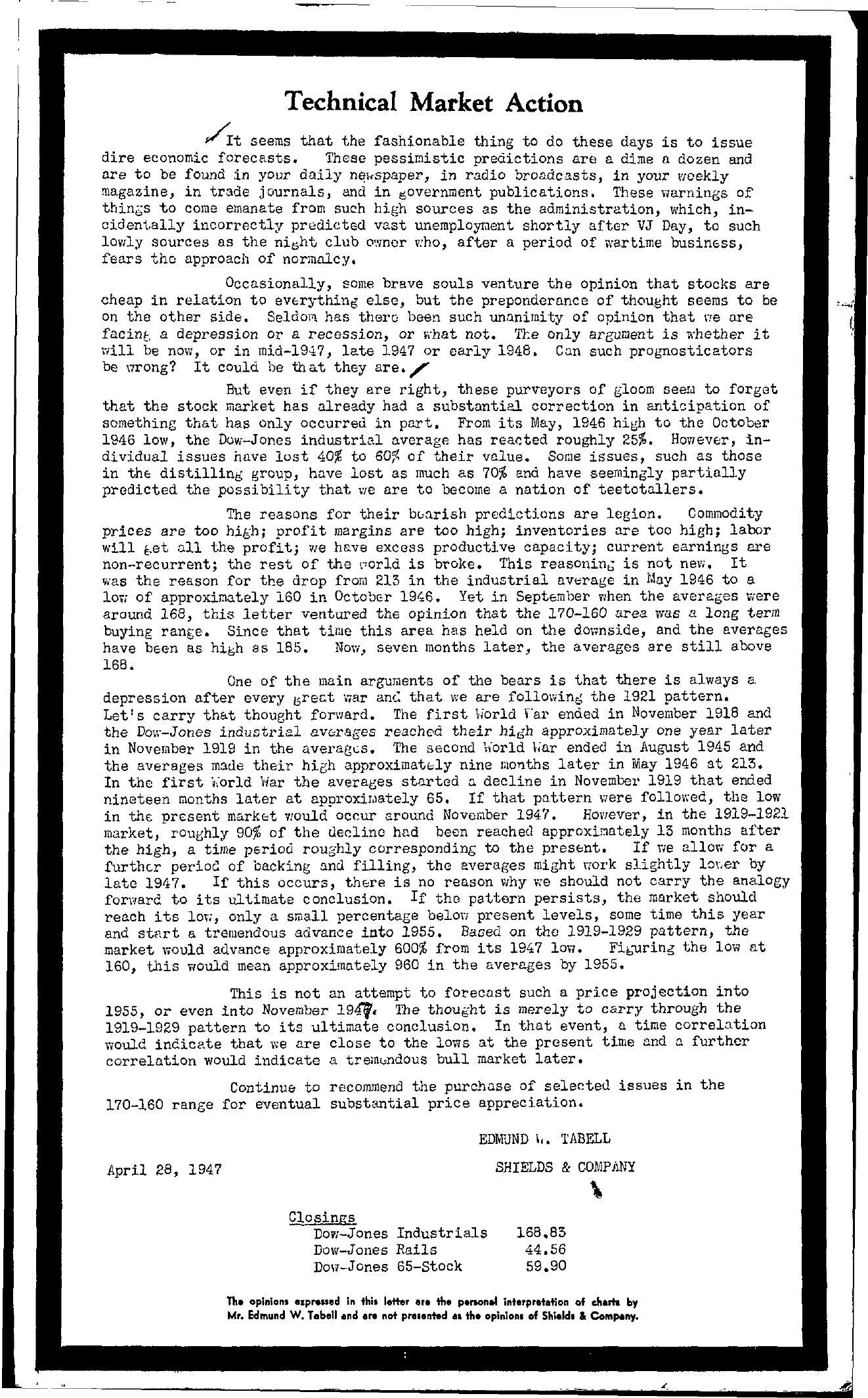 Technical Market Action t seems that the fashionable thing to do these days is to issue dire economic forecasts. Those pessimistic preciictions are a dime a dozen and are to be found in your daily nlspaper, in radio broadcasts, in your Vleekly magazine, in trade journals, and in t;overnment publications. These warnings of thinbs to come emanate from such high sOurces as the administration, which, incident-ally incorrectly predicted vast unemployraent shortly after VJ Day, to such 10V/ly sources as the ni5ht club a'.mer vho, after a period of wartime busineSs, fears tho approach of normalcy. Occasionally, some brave souls venture the opinion that stocks are cheap in relation to eVbrythin5 else, but the preponderance of thought seems to be on the other side. Seldon has there been such unD.nimity of opinion that rle are facinE. a depression or a recession, or I,'hat not. T1e only arGUment is whether it will be now, or in mid-19-i7, late 1947 or early 1948. Can such prognosticators be I7rong It could be th at they are. / But even if they are right, these purveyors of gloom seerti to forget that the stock market has already had a substantial correction in anticipation of something that has only occurred in part. From its May, 1946 high to the October 1946 low, the Dow-Jones industrial average has reacted roughly 25. HovlevEr, individual issues have lost 40 to 60 of their value. SOlle issues, such as those in the distilling group, have lost as much as 70 and have seemingly partially predicted the possibility that we are to become a nation of teetotallers. The reasons for their bo.rish predictions are legion. Commodity prices are too high; profit margins are too high; inventories are too high; labor will et all the profit; we have excess productive capacity; current earnings are non-recurrent; the rest of the porld is broke. This reasonin,; is not new. It was the reason for the drop from 215 in the industrial av;rage in !.lay 1946 to a 10.; of approximately 160 in October 191.6. Yet in September when the averages were around 168, this letter ventured the opinion that the 170-160 area was a long term buying range. Since that time this area has held on the downside, and the averages have bGen as high as 185. Now, seven months later, the averages are still above 168. One of the main arguments of the bears is that there is always a depression after every I5rer.t \'iar anC that we are following the 1921 pattern. Let I s carry that thought forward. The first liorld V'al' ended in November 1918 and the Dow-Jones industrial av&rages reached their hi5h approximately one year later in November 1919 in the averags. The second horld liar ended in August 1945 and the averages made their hih approximatbly nine months later in May 1946 at 215. In the first ,;orld liar the averages started a decline in November 1919 that ended nineteen months later at approxir,lately 65. If that pa.ttern vlere followed, the low in the present mark8t vlould occur around November 1947. HOl'lever, in the 1919-1921 market, rouhly 90 of the decline had been reached approxinately 15 months after the high, a time period roughly correspond ill; to the presbnt. If rie allow for a further perioe'! of backing and filling, the averages might nork slightly lo\',er by late 194,7. If this occurs, there is no reason why Vie should not carry the analogy forward to its ultimate conclusion. If tho pattern perSists, the market should reach its 10.. , only a small percentage belor; present levels, some time this year and stnrt a tremendous advance into 1955. Based on the 1919-1929 pattern, the market would advance approximately 600 from its 1947 low. Fibrin5 the low at 160, this would mean approximately 960 in the averages by 1955. This is not an attempt to forecast such a price projection into 1955, or even into November 1941'. The thought is merely to carry through the 1919-1929 pattern to its ultimate conclusion. In that event, a time correla.tion would inc.icate that …e are close to the lows at the present time and 11 further correlation would indicate a tremndous bull market later. Continue to recommend the purchase of selected. issues in the 170-160 range for eventual substantial price appreciation. April 28, 1947 EDMUND \,. TABELL SHIELDS & COMPANY \ Closings DOVi-Jones Industrials Dow-Jones Rails DOlI-Jones 65-Stock 168.85 44.56 59.90 n. opinions elpressed in this letter are the p.lIOnai interpretation of charta by Mr. Edmund W. T.b.n end .re not prentad ., th. opinlonl of Shield, & Comny. I,