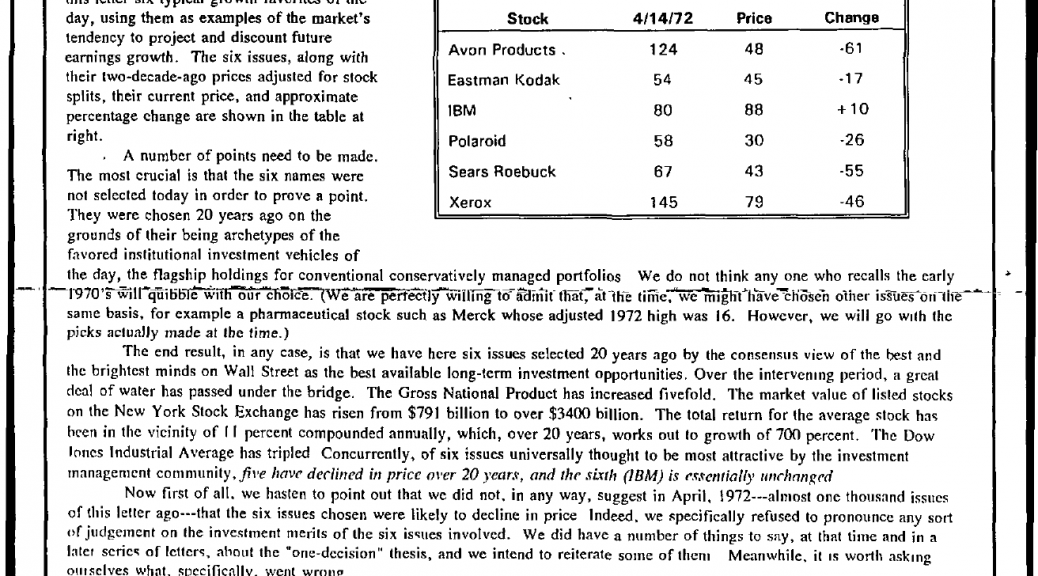 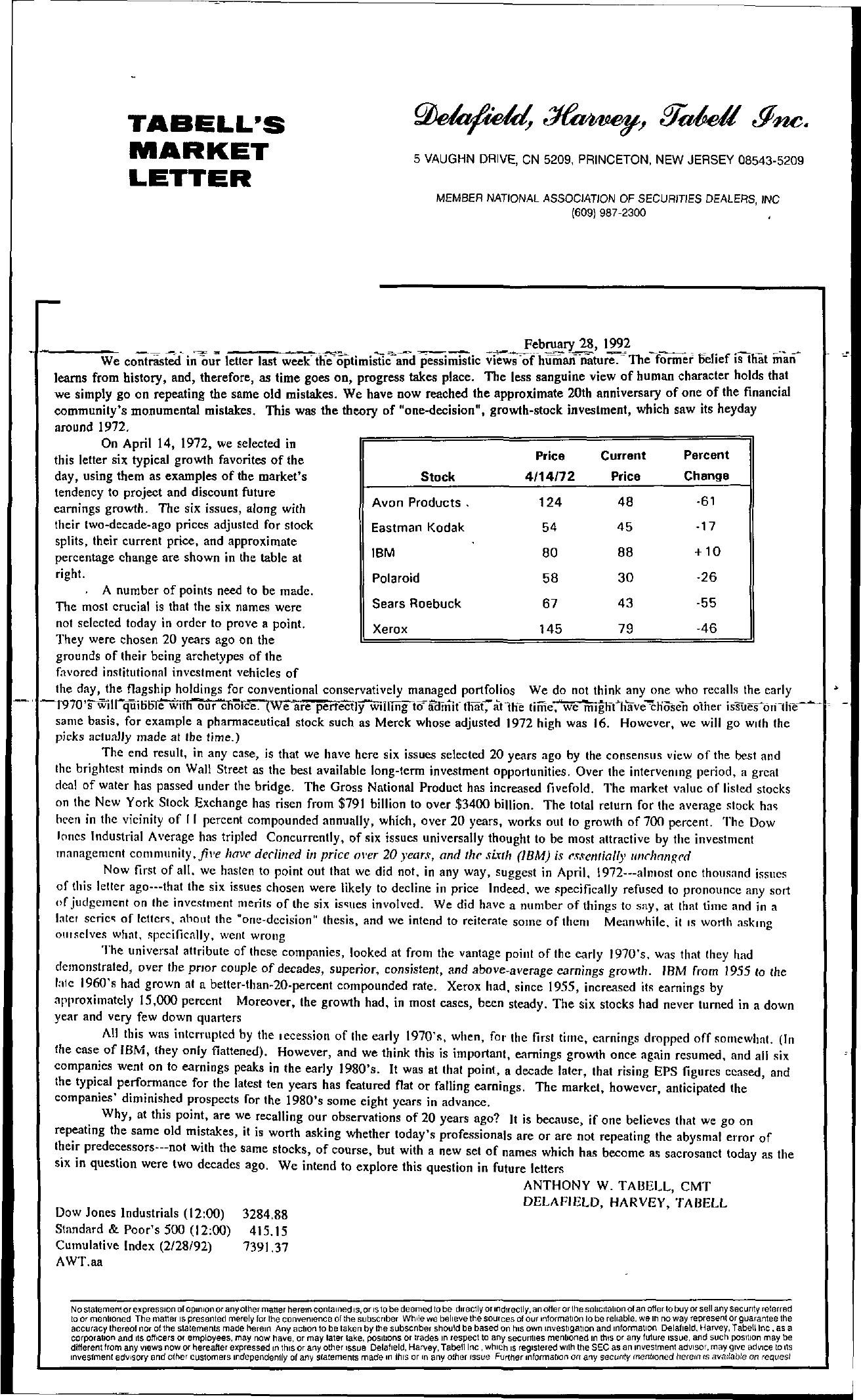 TABELL'S MARKET LETTER 5 VAUGHN DRIVE, CN 5209, PRINCETON, NEW JERSEY 08543-5209 MEMBER NATIONAL ASSOCIATION OF SECURITIES DEALERS, INC (609 987-2300 February 28, 1992 iiiaWe co;trast..f iu letter last wthtimi.;';;d pessi;;;Wic view70numai\-n-ature-' The-former oelief iSthat learns from history, and, therefore, as time goes on, progress takes place. The less sanguine view of human character holds tht we simply go on repeating the same old mistakes. We have now reached the approximate 20th anniversa,, of one. of the financial community's monumental mistakes. This was the theory of one-decision, growth-stock investment, which saw Its heyday around 1972. On April 14, 1972, we selected in this letter six typical growth favorites of the Price Current Percent day, using them as examples of the market's Stock 4/14/72 Price Change tendency to project and discount future earnings growth. The six issues along with Avon Products. 124 48 -61 their two-decade-ago prices adjusted for stock splits, their current price, and approximate percentage change are shown in the table at Eastman Kodak IBM 54 45 -17 80 88 10 right. A number of points need to be made. The most crucial is that the six names were Polaroid Sears Roebuck 58 30 67 43 -26 -55 not selected today in order to prove a point. Xerox 145 79 -46 They were chosen 20 years ago on the grounds of their being archetypes of the favored institutional investment vehicles of the day, the flagship holdings for conventional conservatively managed portfolios We do not think anyone who recalls the early —1970'5 witl-q'UitiDlewllhour choice. (We are pertecfly\vilhng toi'djnir thiit7'a-nhe time. we mlgh(Have1h'Osen olher issuesoTCthe—'— same basis. for example a pharmaceutical stock such as Merck whose adjusted 1972 high was 16. However, we will go With the picks actuaJJy made at the time.) The end result, in any case, is that we have here six issues selected 20 years ago by the consensus view of the best and the brightest minds on Wall Street as the best available long-term investment opportunities. Over the intervening period, a great deal of water has passed under the bridge. The Gross National Product has increased fivefold. The market value of listed stocks on the New York Stock Exchange has risen from 791 billion to over 3400 billion. The total return for the average stock ha. hoen in the vicinity of II percent compounded annually, which, over 20 years, works Ollt to growth of 700 percent. The Dow lones Industrial Average has tripled Concurrently, of six issues universally thought to be most attractive by the investment management comtnunitY.,,fi,'e hove derlined ill price Ol'er 20 years, and the sixth (IBM) is essentially lmrlmnged Now first of all. we hasten to point out that we did not. in any way, suggest in April. 1972—almost one thousand issues of this leiter ago—that the six issues chosen were likely to decline in price Indeed. we pecifically refused to pronounce any salt or judgement on the investment merits of the six isc;ues involved. We did have a number of things to say. at Ih1t time and in a lalcl scrieo;; of lettcre;. ahout the one-decision thesis, and we intend to reiterate some of them Meanwhile. it IS worth asking olllselves What, specifically, went wrong The universal attribute of these companies, looked at from the vantage point of the early 1970's, was that they had demonstrated, over the pnor couple of decades, superior, consistent, and above-average earnings growth. IBM from 1955 to the laic 1960's had grown at a better-than-20-percent compounded rate. Xerox had. since 1955, increased its earnings by approximately 15,000 percent Moreover, the growth had, in most cases, been steady. The six stocks had never turned in a down year and very few down quarters All this was interrupted by the lecession of the early 1970's, when, for the first time, earnings dropped off somewhat. (In the case of IB!v1, they only flattened). However, and we think this is important, e.1mings growth once again resumed, and all six companies went on to earnings peaks in the early 1980's. It was at that point, a decade later, that rising EPS figures ceased, and the typical performance for the latest ten years has featured flat or falling earnings. The market, however, anticipated the companies' diminished prospects for the 1980's some eight years in advance. Why, at this point. are we recalling our observations of 20 years ago It is because) if one believes that we go on repeating the same old mistakes, it is worth asking whether today's professionals are or are not repeating the abysmal error of their predecessors–not with the same stocks, of course, but with a new set of names which has become as sacrosanct today as the six in question were two decades ago. We intend to explore this question in future letters Dow Jones Industrials (1200) Standard & Poor's 500 (1200) Cumulative Index (2/28/92) AWT.aa 3284.88 415.15 7391.37 ANTHONY W. TAIlEtL, CMT DELAFIELD, HARVEY, TABELL No statement or expression of opinion or any other matter herein contained is, or is to be deemed to be, directly or indirectly, an offer or the solicitation of an offer to buy or sell any security referred to or mentioned. The matter is presented merely for the convenience of the subscriber. While we believe the sources of our information to be reliable, we in no way represent or guarantee the accuracy thereof nor of the statements made herein. Any action to be taken by the subscriber should be based on his own investigation and information. Delafield, Harvey, Tabell Inc. as a corporation and its officers or employees, may now have, or may later take, positions or trades in respect to any securities mentioned in this or any future issue, and such position may be different from any views now or hereafter expressed in this or any other issue. Delafield, Harvey, Tabell Inc., which is registered with the SEC as an investment advisor, may give advice to its investment advisory and other customers independently of any statements made in this or in any other issue. Further information on any security mentioned herein is available on request.