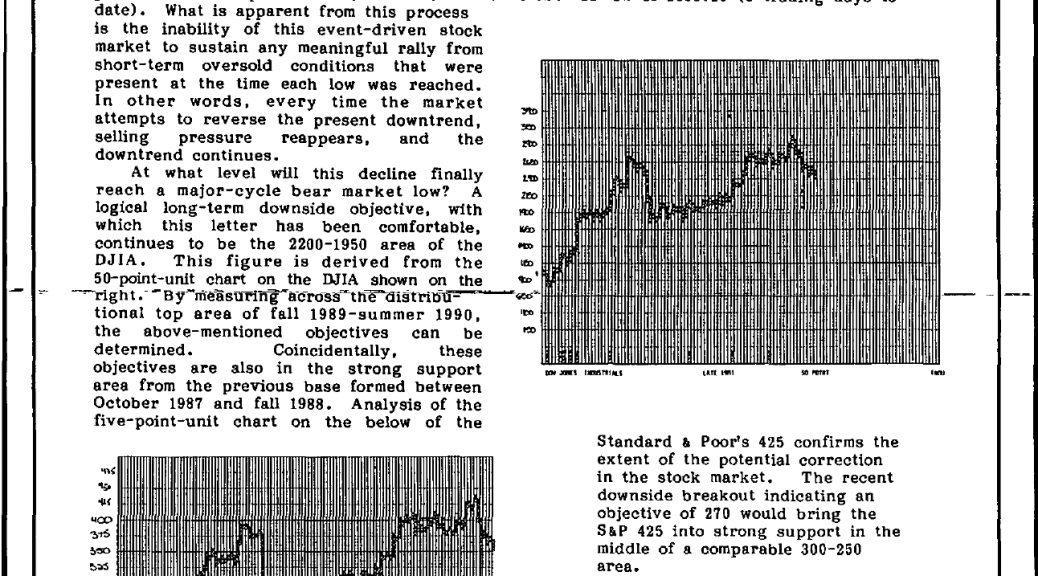 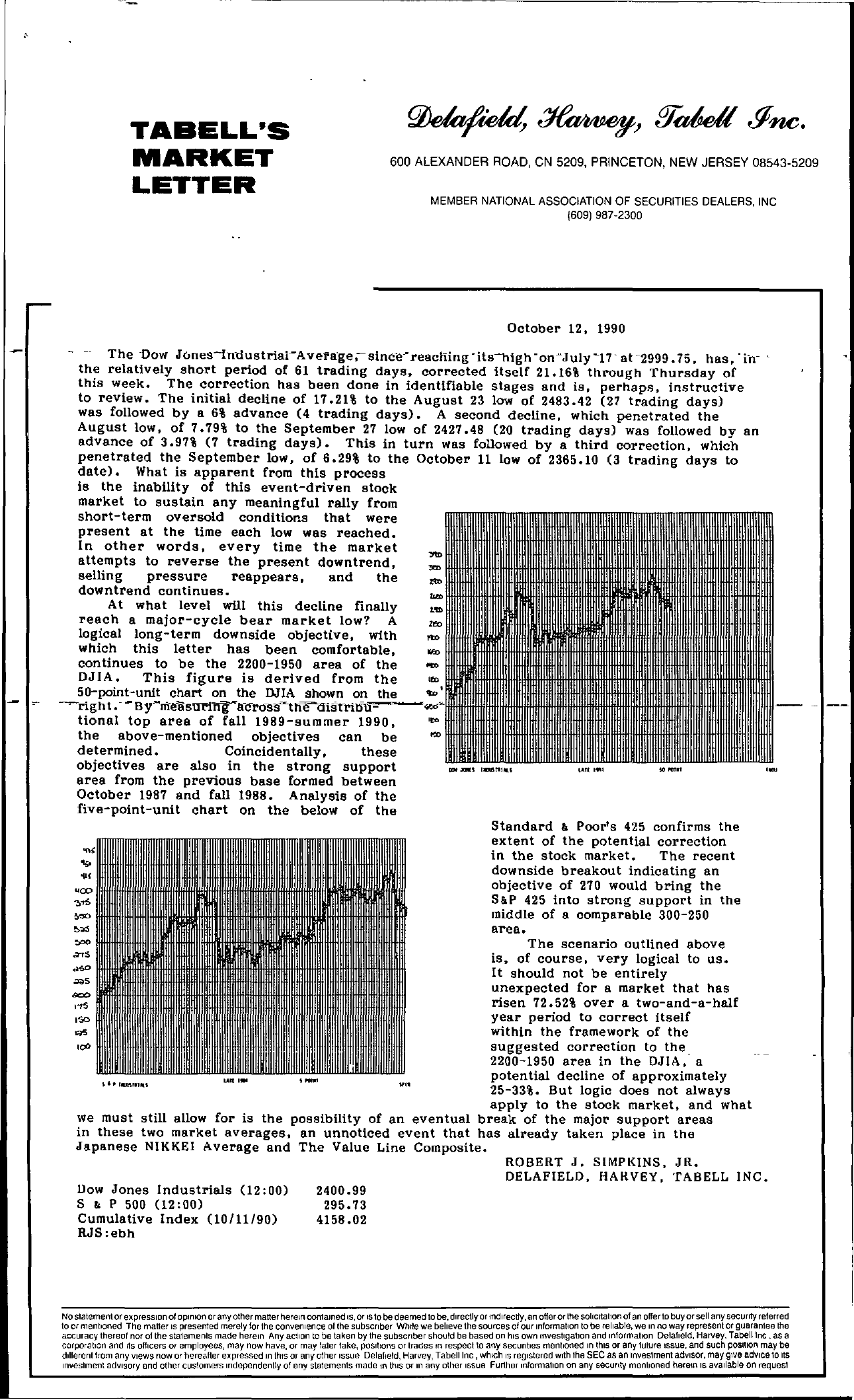 TABELL'S MARKET LETTER 600 ALEXANDER ROAD, CN 5209, PRINCETON, NEW JERSEY 08543-5209 MEMBER NATIONAL ASSOCIATION OF SECURITIES DEALERS, INC (609) 987-2300 October 12, 1990 The -Dow J6nes-Imiustriai-Avera-ge,- sinc1!reaching -its-high -on-July -17 – at -2999.75, has, in- the relatively short period of 61 trading days, corrected Itself 21.16 through Thursday of this week. The correction has been done in identifiable stages and is, perhaps. instructive to review. The initial decline of 17.21 to the August 23 low of 2483.42 (27 trading days) was followed by a 6 advance (4 trading days). A second decline, which penetrated the August low, of 7.79 to the September 27 low of 2427.48 (20 trading days) was followed by an advance of 3.97 (7 trading days). This in turn was followed by a third correction, which penetrated the September low, of 6.29 to the October 11 low of 2365.10 (3 trading days to date). What is apparent from this process is the inability of this event-driven stock market to sustain any meaningful rally from short-term oversold conditions that were present at the time each low was reached. In other words, every time the market attempts to reverse the present downtrend, selling pressure reappears, and the downtrend continues. At what level will this decline finally reach a major-cycle bear market low A logical long-term downside objective, with which this letter has been comfortable, continues to be the 2200-1950 area of the DJIA. This figure is derived from the 50-paint-unit chart on the DJIA shown on the —right.– B tional top area of 1989-summer 1990, the above-mentioned objectives can be determined. COincidentally, these objectives are also in the strong support area from the previous base formed between 101 InULl lAiI .'. !I) POtU IIIIll October 1987 and fall 1988. Analysis of the five-point-unit chart on the below of the Standard 10 Poor's 425 confirms the extent of the potential correction in the stock market. The recent downside breakout indicating an objective of 270 would bring the SloP 425 into strong support in the middle of a comparable 300-250 area. The scenario outlined above is, of course, very logical to us. It should not be entirely unexpected for a market that has risen 72.52 over a two-and-a-half year period to correct itself within the framework of the '00 suggested correction to the 2200-1950 area in the DJIA, a un … .. . potential decline of approximately 25-33. But logic does not always apply to the stock market, and what we must still allow for is the possibility of an eventual break of the major support areas in these two market averages, an unnoticed event that has already taken place in the Japanese NIKKEI Average and The Value Line Composite. ROBERT J, SIMPKINS, JR. Dow Jones Industrials 0200) S & P 500 (1200) Cumulative Index (10/11/90) RJS ebh 2400.99 295.73 4158.02 DELAFIELD, HARVEY, TAB ELL INC. No stalementor expression 01 Opinion or any other matter herein contained IS, or IS to be deemed to be, directly or mdlrectly, an offer or the solicitation of an offerto buy or sell any security referred to or mentioned The matter IS presented merely for the convenience of the subSCriber While we believe the sources of our mformaliOn to be reliable, we mno way represent or guarantee the accuracy thereof nor of the statements made herein Any action to be laken by the subSCriber should be based on hiS own IIwestlgalion and InformaliOn Delafield, Harvey, Tabell Inc, as a corporation and ItS officers or employees, may now have, or may later take, pOSitions or trades In respecllo any seCUrities mentioned In thiS or any future Issue, and such pOSition may be dlffersnl from any views now or hereafter expressed In thiS or any other Issue Delafield, Harvey, Tabelllnc, which IS registered With the SEC as an Investment adVisor, may give adVice to liS Investment adVISOry and other customers mdependently of any statements made In thiS Of In any other Issue Further Information on any S8cunty menboned herein IS available on request