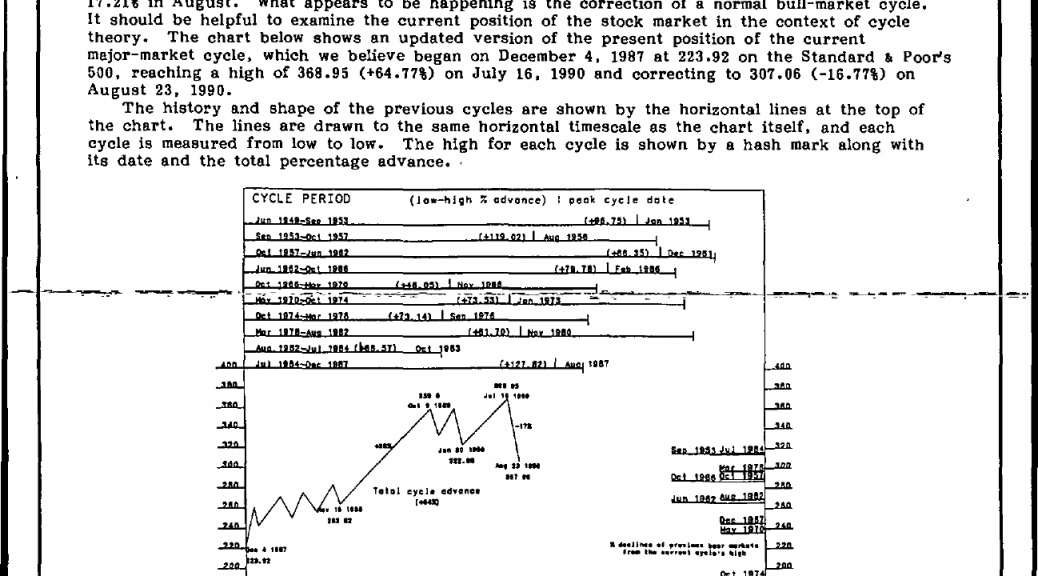 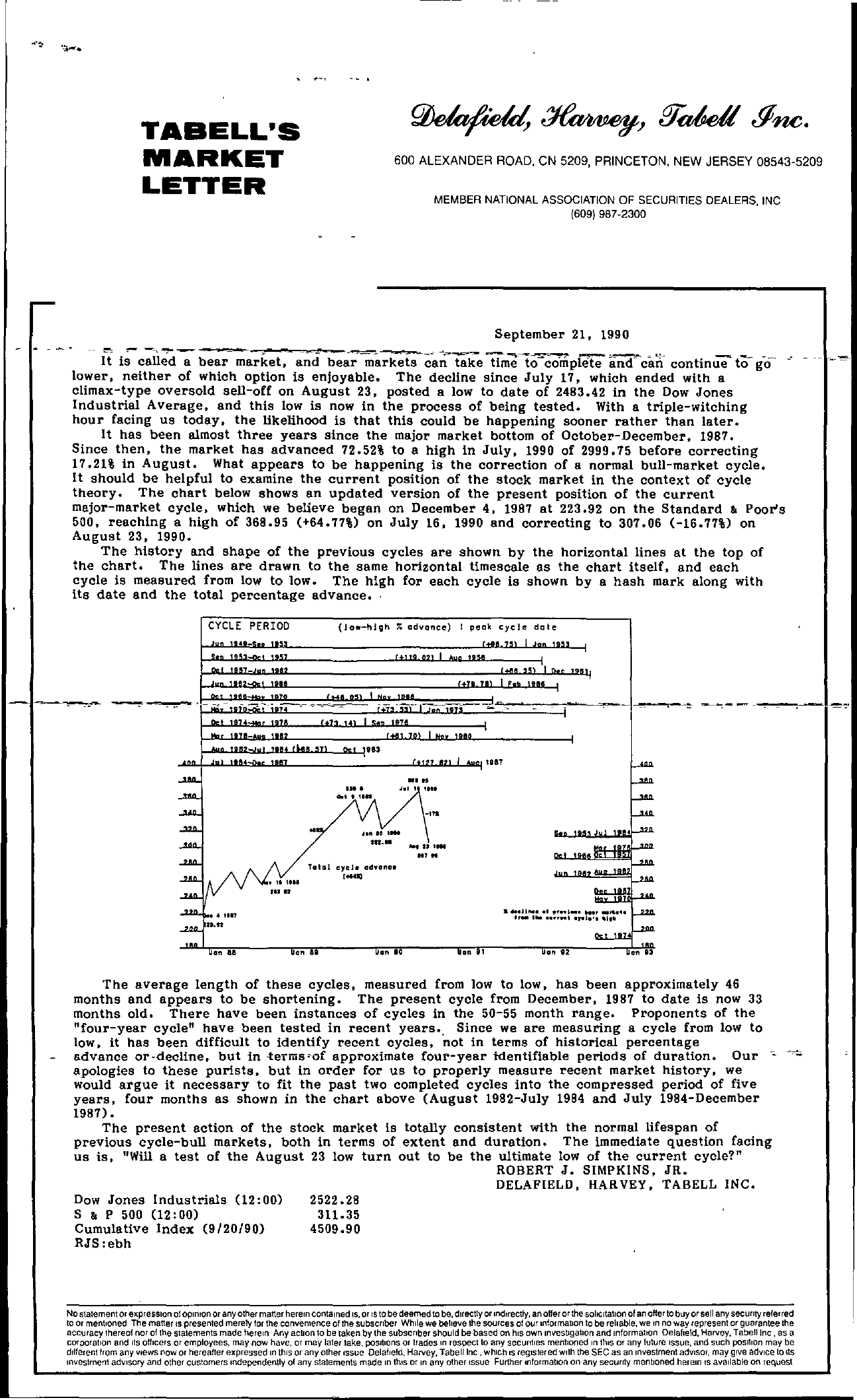 .,…… TABELL'S MARKET LETTER 600 ALEXANDER ROAD, CN 5209, PRINCETON. NEW JERSEY 08543-5209 MEMBER NATIONAL ASSOCIATION OF SECURITIES DEALERS, INC (609) 987-2300 September 21, 1990 .—–,,———- — -, – It is called a bear market, and bear markets can take time to-co'mplete and- c'ul continue to go- lower, neither of which option is enjoyable. The decline since July 17, which ended with a climax-type oversold sell-off on August 23, posted a low to date of 2483.42 in the Dow Jones Industrial Average, and this low is now in the process of being tested. With a triple-witching hour facing us today, the likelihood is that this could be happening sooner rather than later. It has been almost three years since the major market bottom of October-December, 1987. Since then, the market has advanced 72.52 to a high in July, 1990 of 2999.75 before correcting 17.21 in August. What appears to be happening is the correction of a normal bull-market cycle. It should be helpful to examine the current position of the stock market in the context of cycle theory. The chart below shows an updated version of the present position of the current major-market cycle, which we believe began on December 4, 1987 at 223.92 on the Standard Poor's 500, reaching a high of 368.95 (64.77) on July 16, 1990 and correcting to 307.06 (-16.77) on August 23, 1990. The history and shape of the previous cycles are shown by the horizontal lines at the top of the chart. The lines are drawn to the same horizontal timescale as the chart itself, and each cycle is measured from low to low. The high for each cycle is shown by a hash mark along with its date and the total percentage advance. CYCLE PERIOD (Jow-hl;h advance) I peak cycle date —— r …..-t……LL..JIW-'.w w.w..L'IlIa1 N' .. , -101131 c,c1. dy. ,…, It .. —– – -……-;—I-, n 88 n 81 n 10 n II on 12 n 13 The average length of these cycles, measured from low to low, has been approximately 46 months and appears to be shortening. The present cycle from December, 1987 to date is now 33 months old. There have been instances of cycles In the 50-55 month range. Proponents of the four-year cycle have been tested in recent years., Since we are measuring a cycle from low to low, it has been difficult to Identify recent cycles, not in terms of historical percentage advance orrdecline. but in -teriiisr-of approximate four-year identifiable periods of duration. Our -. apologies to these purists, but in order for us to properly measure recent market history, we would argue it necessary to fit the past two completed cycles into the compressed period of five years, four months as shown in the chart above (August 1982-July 1984 and July 1984-December 1987) The present action of the stock market is totally consistent with the normal lifespan of previous cycle-bull markets, both in terms of extent and duration. The immediate question facing us is, Will a test of the August 23 low turn out to be the ultimate low of the current cycle ROBERT J. SIMPKINS, JR. DELAFIELD, HARVEY, TABELL INC. Dow Jones Industrials (12 00) 2522.28 S & P 500 (1200) 311.35 Cumulative Index (9/20/90) 4509.90 RJSebh Nostatement or expression 01 opinIOn or any other matter herein contained IS, or IS to be deemed to be, duectly or Indirectly, an offer or the sohCltalion of an offer to buy or sell any secUrity referred 10 or mentIOned The matter IS presented merely for the convenience of the subSCriber While we beheve the sources of our .nformallon to be rehable, we In no way represent or guarantee Ihe accuracy thereof nor of the statements made herein Any acllon to be taken by the subscrrber should be based on h.s own Investigation and Informat.on Delafceld, Harvey. Tabel1 Inc ,as a corporation and .ts officers or employees, may now have, or may later lake, pos.t.ons or trades.n respect to any seCUrities mentIOned In thiS or any future Issue, and such poslt.on may be d.fferent from any vtews now or hereafter expressed In thiS or any other Issue Delafield, Harvey, Tabel1 Inc ,WhiCh IS registered With the SEC as an Investment adVIsor, may gIVe adVice to liS Investment adVISOry and other customers .ndependently of any statements made In thiS or In any other Issue Further Informat.on on any secLlrrty ment.oned herein IS ava.lable on request