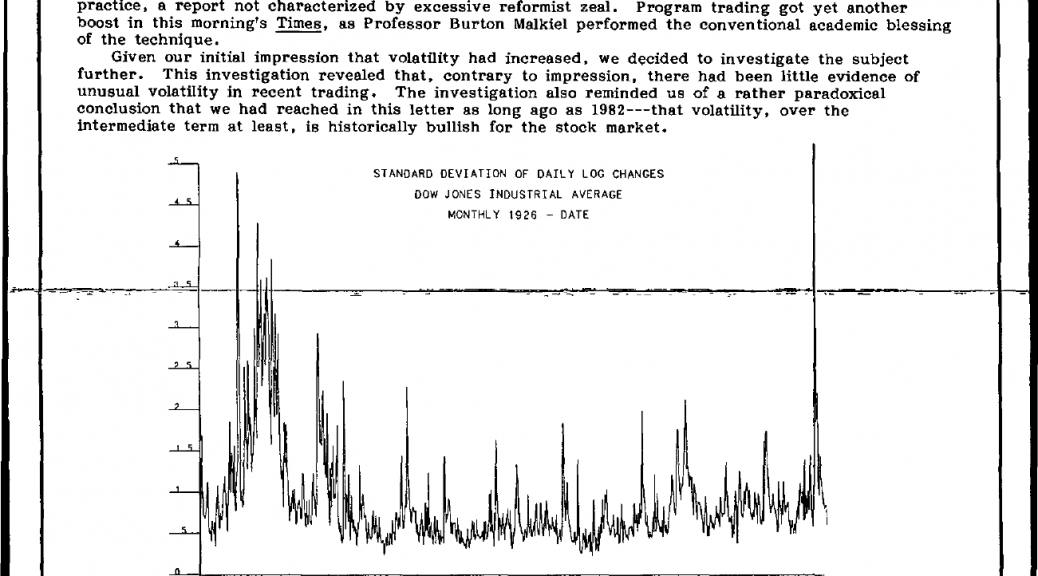 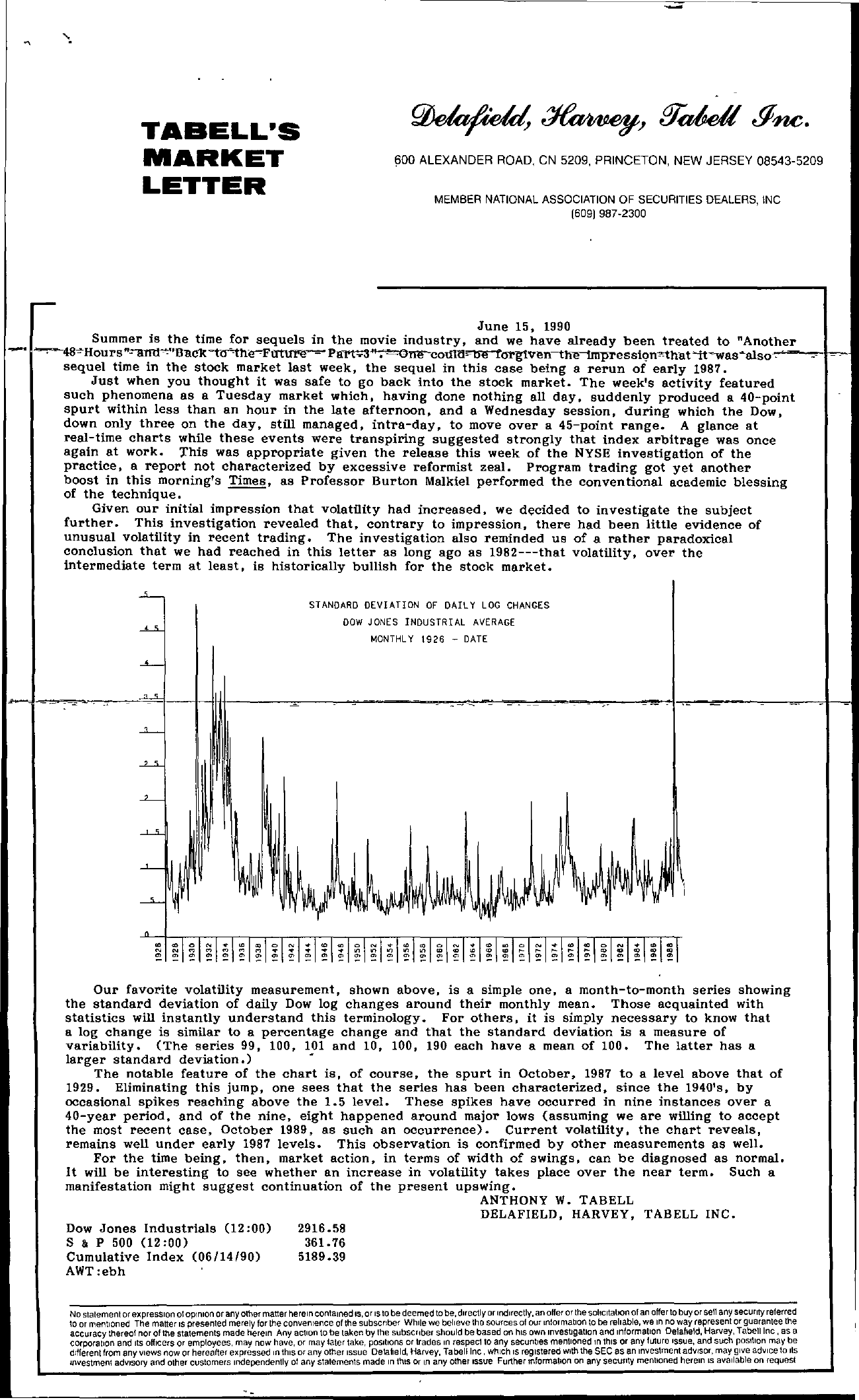 ., TABELL-S MARKET LETTER !l00 ALEXANDER ROAD. CN 5209. PRINCETON, NEW JERSEY 08543-5209 MEMBER NATIONAL ASSOCIATION OF SECURITIES DEALERS, INC 609) 987-2300 Summer is the time for sequels in the movie June 15, 1990 and we have already been treated to Another sequel time in the stock market last week, the sequel in this case being a rerun early 1987. Just when you thought it was safe to go back into the stock market. The week's activity featured such phenomena as a Tuesday market which, having done nothing all day, suddenly produced a 40-point spurt within less than an hour in the late afternoon, and a Wednesday session, during which the Dow J down only three on the day, still managed, intra-day, to move over a 45-point range. A glance at real-time charts while these events were transpiring suggested strongly that index arbitrage was once again at work. This was appropriate given the release this week of the NYSE investigation of the practice, a report not characterized by excessive reformist zeal. Program trading got yet another boost in this morning's Times, 8S Professor Burton Malkiel performed the conventional academic blessing of the technique. Given our initial impression that volatility had increased. we decided to investigate the Bubject further. This investigation revealed that contrary to impression there had been little evidence of unusual volatility in recent trading. The investigation also reminded us of a rather paradoxical conclusion that we had reached in this letter as long ago as 1982—that volatility, over the intermediate term at least, is historically bullish for the stock market. STANDARD DEVIATION OF DAILY LOG CHANGES DOW JONES INDUSTRIAL AVERAGE MONTHLY 1926 – DATE Our favorite volatility measurement, shown above. is a simple one. a month-to-month series showing the standard deviation of daily Dow log changes around their monthly mean. Those acquainted with statistics will instantly understand this terminology. For others. it is simply necessary to know that a log change is similar to a percentage change and that the standard deviation is a measure of variability. (The series 99, 100, 101 and 10, 100, 190 each have a mean of 100. The latter has a larger standard deviation.) The notable feature of the chart is, of course, the spurt in October, 1987 to a level above that of 1929. Eliminating this jump, one sees that the series has been characterized, since the 1940's. by occasional spikes reaching above the 1.5 level. These spikes have occurred in nine instances over a 40-year period, and of the nine, eight happened around major lows (assuming we are willing to accept the most recent case, October 1989, as such an occurrence). Current volatility. the chart reveals, remains well under early 1987 levels. This observation is confirmed by other measurements as well. For the time being. then, market action, in terms of width of swings, can be diagnosed as normal. It will be interesting to see whether an increase in volatility takes place over the near term. Such a manifestation might suggest continuation of the present upswing. ANTHONY W. TABELL DELAFIELD, HARVEY, TAB ELL INC. Dow Jones Industrials (12 00) 2916.58 S & P 500 (1200) 361.76 Cumulative Index (06/14/90) 5189.39 AWTebh No statement or expression ot opInion or any other mailer herein contained IS, or IS to be deemed to be, directly or Indirectly, an offer or the soliCitation ot an offer to buy or sen any secuflty reterred to or mentioned The matter IS presented merely for the convenience of the subscnber While we believe the sources of our Iniormatlon to be rehable, we In no way represent or guarantee the aCcuracy thereof nor of the statements made herein Any action to be taken by the subscnber should be based on hiS own InvestJgatlon and Information Delafield, Harvey, Tabelllnc, as a corporation and Its officers or employees, may now have, or may tater take, pOSitions or trades 10 resped to any secuntles mentioned In thiS or any fuMe Issue, and such position may be different from any views now or hereafter expressed III this or any other Issue Delafield, Harvey, Tabelllnc, which IS registered With the SEC as an Investment advisor, may give advice to ItS Investment adVISOry and olher customers Independently 01 any statements made In thts or m any other ISsue Further Information on any secunty menlloned herein IS available on request