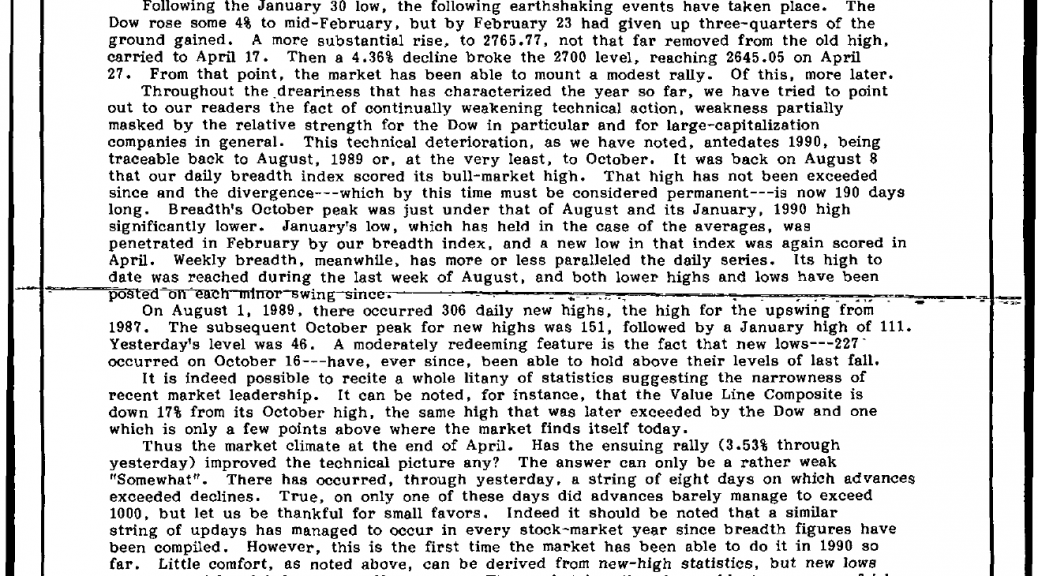 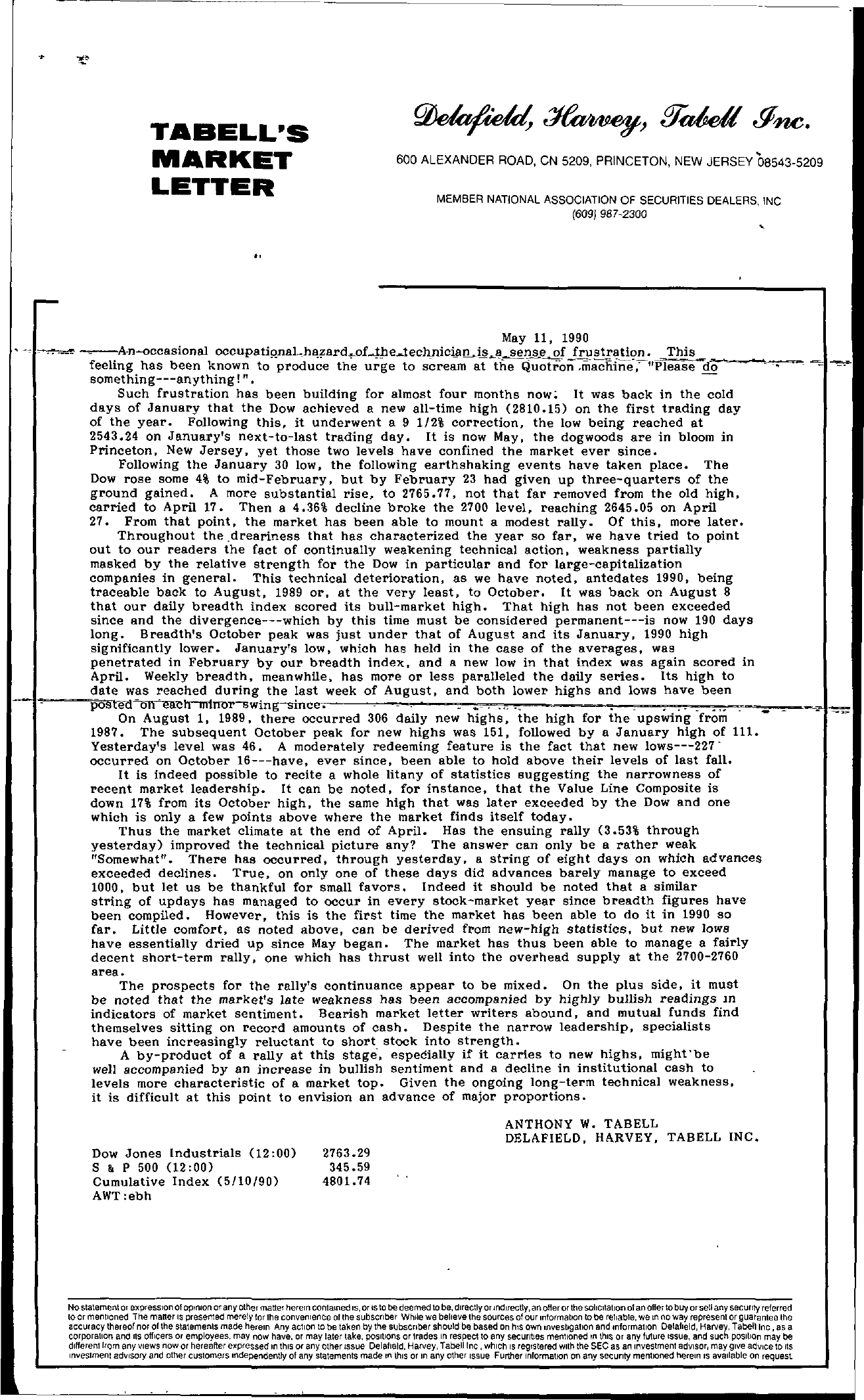 TABELL'S MARKET LETTER ., 600 ALEXANDER ROAD, CN 5209, PRINCETON, NEW JERSEY '08543-5209 MEMBER NATIONAL ASSOCIATION OF SECURITIES DEALERS, INC (609 987-2300 , May 11, 1990 –e- – -c–A-n–occasional occupationBLh8zardof-1.he….Jechniciais a sense of frustration.. This the urge at-the Quotronfeeling has been known to–produe to scre;m ,machfne;-Please do—- something—anything! . Such frustration has been building for almost four months now; It was back in the cold days of January that the Dow achieved a newall-time high (2810.15) on the first trading day of the year. Following this, it underwent a 9 1/2 correction, the low being reached at 2543.24 on January's next-to-Iast trading day. It is now May, the dogwoods are in bloom in Princeton, New Jersey, yet those two levels have confined the market ever since. Following the January 30 low, the following earthshaking events have taken place. The Dow rose some 4 to mid-February, but by February 23 had given up three-quarters of the ground gained. A more substantial rise, to 2765.77, not that far removed from the old high, carried to April 17. Then a 4.36 decline broke the 2700 level, reaching 2645.05 on April 27. From that point, the market has been able to mount a modest rally. Of this, more later. Throughout the ,dreariness that has characterized the year so far, we have tried to point out to our readers the fact of continually weakening technical action, weakness partially masked by the relative strength for the Dow in particular and for large-capitalization companies in general. This technical deterioration, as we have noted, antedates 1990, being traceable back to August, 1989 or, at the very least, to October. It was back on August 8 that our daily breadth index scored its bull-market high. That high has not been exceeded since and the divergence—which by this time must be considered permanent—is now 190 days long. Breadth's October peak was just under that of August and its January, 1990 high significantly lower. January's low, which has held in the case of the averages, was penetrated in February by our breadth index. and a new low in that index was again scored in April. Weekly breadth, meanwhile, has more or less paralleled the daily series. Its high to date was reached during the last week of August, and both lower highs and lows have been 1.,..–…..,p-b's'tea()lrm1norwing–since. ' ' , w , On August I, 1989, there occurred 306 daily new highs, the high for the upswing from 1987. The subsequent October peak for new highs was 151, followed by a January high of 111. Yesterday's level was 46. A moderately redeeming feature is the fact that new lows—227' occurred on October 16—have. ever since. been able to hold above their levels of last fall. lt is indeed possible to recite a whole litany of statistics suggesting the narrowness of recent market leadership. t can be noted, for instance, that the Value Line Composite is down 17 from its OctOber high, the same high that was later exceeded by the Dow and one which is only a few points above where the market finds itself tOday. Thus the market climate at the end of April. Has the ensuing rally (3.53 through yesterday) improved the technical picture any The answer can only be a rather weak r'Somewhat. There has occurred, through yesterday. a string of eight days on which advances exceeded declines. True. on only one of these days did advances barely manage to exceed 1000, but let us be thankful for small favors. Indeed it should be noted that a similar string of updays has managed to occur in every stock-market year since breadth figures have been compiled. However, this is the first time the market has been able to do it in 1990 so far. Little comfort. as noted above, can be derived from new-high statistics. but new lows have essentially dried up since May began. The market has thus been able to manage a fairly decent short-term rally, one which has thrust well into the overhead supply at the 2700-2760 area. The prospects for the rally's continuance appear to be mixed. On the plus side, it must be noted that the market's late weakness has been accompanied by highly bullish readings m indicators of market sentiment. Bearish market letter writers abound. and mutual funds find themselves sitting on record amounts of cash. Despite the narrow leadership, specialists have been increasingly reluctant to short stock into strength. A by-product of a rally at this stage, especially if it carries to new highs, might'be weJl accompanied by an increase in bullish sentiment and a decline in institutional cash to levels more characteristic of a market top. Given the ongoing long-term technical weakness. it is difficult at this paint to envision an advance of major proportions. Dow Jones Industrials 02 00) S & P 500 (1200) Cumulative Index (5/10/90) AWTebh 2763.29 345.59 4801.74 ANTHONY W TABELL DELAFIELD, HARVEY, TABELL INC. Nostatementor expressIon 01 op!nton or any other matter hereIn contaIned IS, or IS to bedeemed to be, directly or mdlrectly, an offeror the soliCItation of an offer to buy or sell any secuflly referred to or mentioned The matter IS presented merely for the convenienCe of the subscnbet While we beheve the sources of our mformallon to be reliable, we In no way represenl or guarantee the accuracy thereof nor of the statements made herem Any acllOn to be taken by the subSCriber should be based on hIS own mvestlgallOn Bnd mformatlon Delafield, Harvey, Tabel! Inc, as a corporation and liS officers or employees, may now have, or may later take, poSitions or trades In respect to any secunbes menlloned In thiS or any future Issue, and such positIon may be dIfferent from any vIews now or hereafter expressed In thiS or any other Issue Delafield, Harvey, Tabell tnc , whIch IS regIstered with the SEC as an Investment adVisor, may give adVice to ItS Investment adVISOry and other customers Independently of any statements made In thiS or In any other Issue Further InformatIOn on any security mentioned hereIn IS available on request