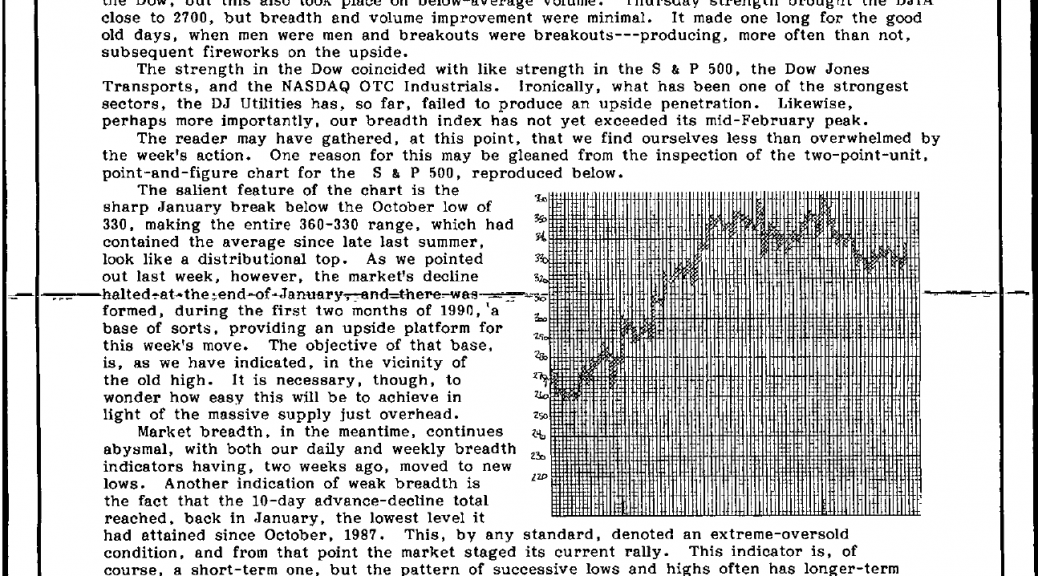 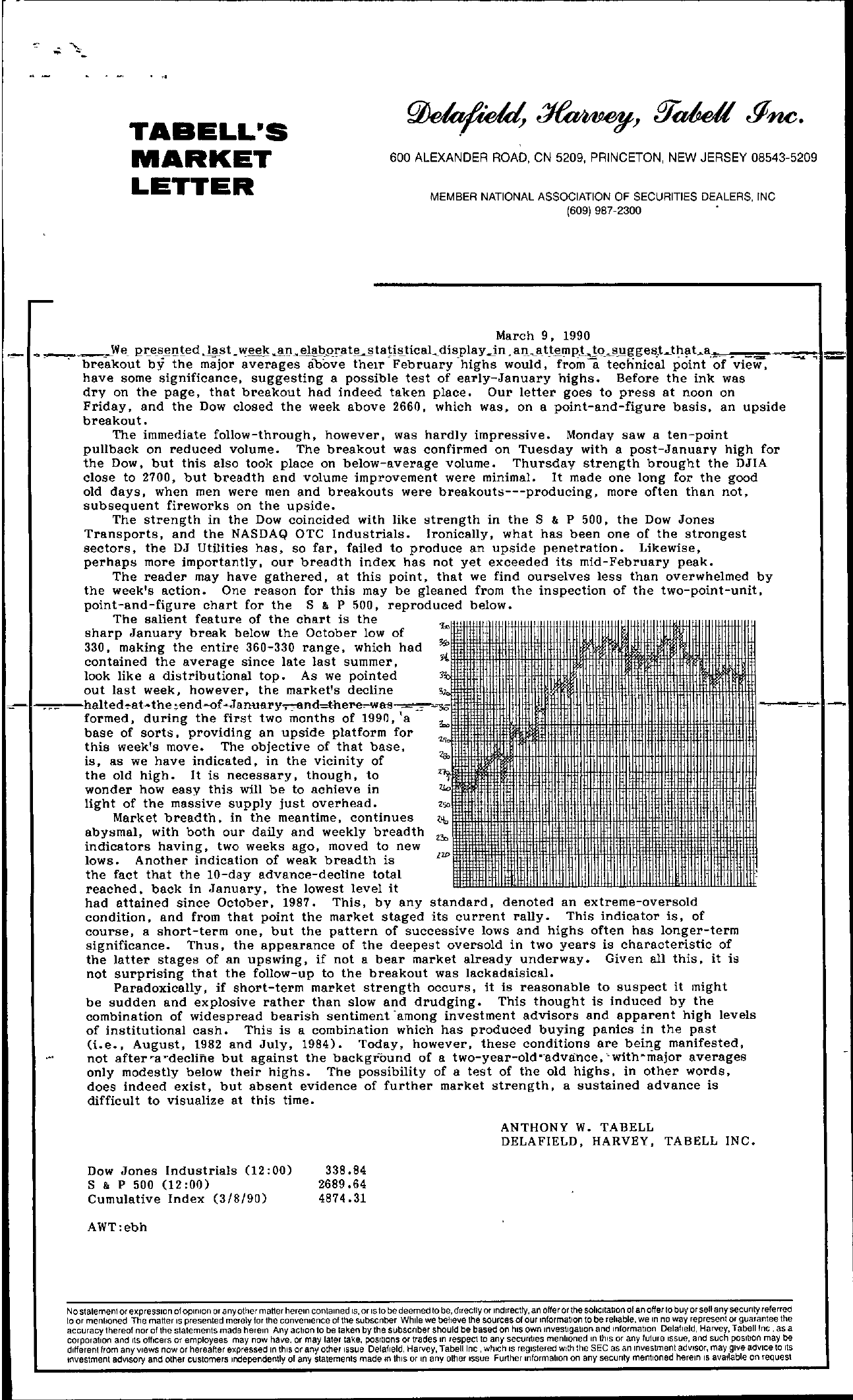 TABELL'S MARKET LETTER 600 ALEXANDER ROAD, CN 5209, PRINCETON, NEW JERSEY 08543-5209 MEMBER NATIONAL ASSOCIATION OF SECURITIES DEALERS. INC (609) 987-2300 March 9. 1990 – – bre-a-kWoeuQtebysJthleed lst V!ee ,J!!l–'l ela9QrattatiJicaL.displayIn. all,—aJtgmp'Q-,ctt1t.a.;;-,;,,,, major averages above theIr -February -highs would,- from a 'II1 have some significance. suggesting a possible test of early-January highs. Before dry on the page. that breakout had indeed taken place. Our letter goes to press at noon on Friday. and the Dow closed the week above 2660. which was. on a point-and-figure basis. an upside breakout. The immediate follow-through, however. was hardly impressive. Monday saw a ten-point pullback on reduced volume. The breakout was confirmed on Tuesday with a post-January high for the Dow. but this also took place on below-average volume. Thursday strength brought the DJIA close to 2700, but breadth and volume improvement were minimal. It made one long for the good old days. when men were men and breakouts were breakouts—producing J more often than not. subsequent fireworks on the upside. The strength in the Dow coincided with like strength in the S & P 500. the Dow Jones Transports. and the NASDAQ OTC Industrials. Ironically. what has been one of the strongest sectors. the DJ Utilities has, so far. failed to produce an upside penetration. Likewise, perhaps more importantly. our breadth index has not yet exceeded its mid-February peak. The reader may have gathered. at this point. that we find ourselves less than overwhelmed by the week's action. One reason for this may be gleaned from the inspection of the two-paint-unit. point-and-figure chart for the S & P 500. reproduced below. The salient feature of the chart is the sharp January break below the October low of 330. making the entire 360-330 range. which had contained the average since late last summer, look like a distributional top. As we pointed out last week. however. the market's decline formed, during the first two months of 1990, la base of sorts. providing an upside platform for this week's move. The objective of that base. is. as we have indicated, in the vicinity of the old high. It is necessary. though. to wonder how easy this will be to achieve in light of the massive supply just overhead. Market breadth. in the meantime. continues indicators having. two weeks ago, moved to new lows. Another indication of weak breadth is the fact that the 10-day advance-decline total reached. back in January. the lowest level it had attained since October, 1987. This, by any standard. denoted an extreme-oversold condition. and from that point the market staged its current rally. This indicator is. of course. a short-term one, but the pattern of successive lows and highs often has longer-term significance. Thus. the appearance of the deepest oversold in two years is characteristic of the latter stages of an upswing. if not a bear market already underway. Given all this. it is not surprising that the follow-up to the breakout was lackadaisical. Paradoxically, if short-term market strength occurs. it is reasonable to suspect it might be sudden and explosive rather than slow and drudging. This thought is induced by the combination of widespread bearish sentiment -among investment advisors and apparent high levels of institutional cash. This is a combination which has produced buying panics in the past (i. e August, 1982 and July. 1984). Today, however. these conditions are being manifested, not after'-a 'decline but against the backgr-ound of a two-year-old –advance. with'ri18jor averages only modestly below their highs. The possibility of a test of the old highs. in other words. does indeed exist, but absent evidence of further market strength, a sustained advance is difficult to visualize at this time. ANTHONY W. TABELL DELAFIELD. HARVEY. TAB ELL INC. Dow Jones Industrials 02 00) S & P 500 (1200) Cumulative Index (3/8/90) 338.84 2689.64 4874.31 AWTebh No statement or expression of opInion or any other mailer herein contained IS, or IS to be deemed to be, directly or Indirectly, an offeror the soliCitation of an offer to buy or sell any seCUrity referred to or men\!oned The matter IS presented merely for the convenience of the subscnber While we beheve the sources of our information to be rehable, we In no way represent or guarantee the accuracy thereof nor of the statements made herein Any action to be taken by the subscriber should be based on hiS own investigation and Information DelafIeld, Harvey, Tabelllnc, as a corporation and lIs officers or employees may now have, or may later tak.e, poSitions or trades In respect to any securities mentioned In thiS or any lulure Issue, and such posllion may be different from any views now or hereafter expressed In thiS or any other Issue Delafield, Harvey, Tabellinc , which IS registered WIth the SEC as an Investment adVisor, may give adVice to lis Il'lVestmenl adVISOry and other customers Independently of any statements made In thiS or In any other Issue Further information on any seCUrity menliOned herein IS avaIlable on request