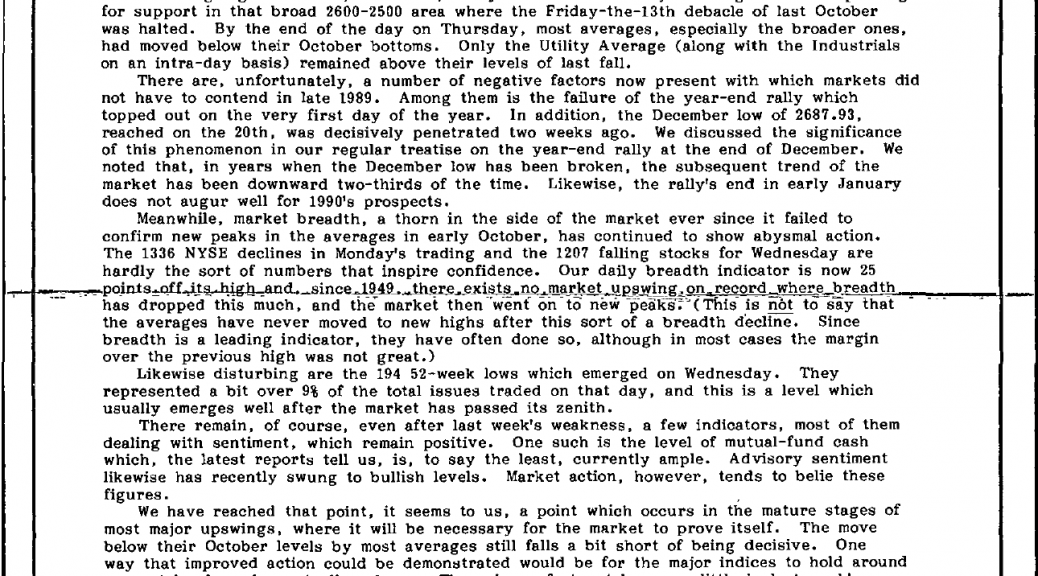 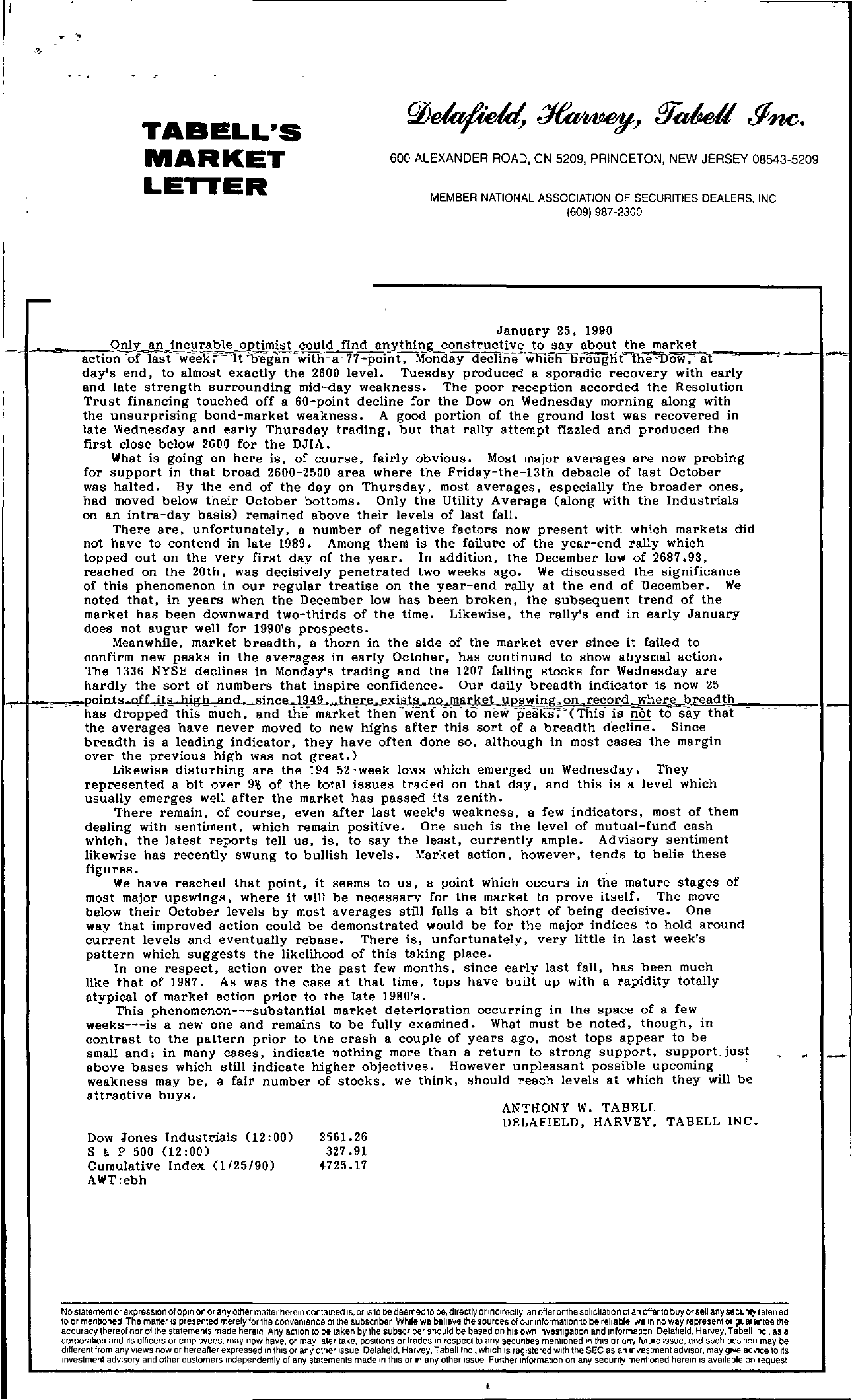 TABELL'S MARKET LETTER 600 ALEXANDER ROAD, eN 5209, PRIN CETON, NEW JERSEY 08543-5209 MEMBER NATIONAL ASSOCIATION OF SECURITIES DEALERS, INC (609) 987-2300 January 25. 1990 ..Onlyaninc!,r.'!bl-pti!!CUld .find aything construcive to.say abou!!,e market – , achon of last week– ltb-egan Wlth-a-77-pOlnt. Monday dechne whlC'flDrougnt the-Dow.at —– day's end. to almost exactly the 2600 level. Tuesday produced a sporadic recovery with early and late strength surrounding mid-day weakness. The poor reception accorded the Resolution Trust financing touched off a 60-point decline for the Dow on Wednesday morning along with the unsurprising bond-market weakness. A good portion of the ground lost was recovered in late Wednesday and early Thursday trading. but that rally attempt fizzled and produced the first close below 2600 for the DJIA. What is going on here is. of course, fairly obvious. Most major averages are now probing for support in that broad 2600-2500 area where the Friday-the-13th debacle of last October was halted. By the end of the day on Thursday. most averages. especially the broader ones. had moved below their October bottoms. Only the Utility Average (along with the Industrials on an intra-day basis) remained above their levels of last fall. There are, unfortunately. 8 number of negative factors now present with which markets did not have to contend in late 1989. Among them is the failure of the year-end rally which topped out on the very first day of the year. In addition. the December low of 2687.93. reached on the 20th. was decisively penetrated two weeks ago. We discussed the significance of this phenomenon in our regular treatise on the year-end rally at the end of December. We noted that. in years when the December low has been broken. the subsequent trend of the market has been downward two-thirds of the time. L.ikewise, the rally's end in early January does not augur well for 1990's prospects. Meanwhile. market breadth. a thorn in the side of the market ever since it failed to confirm new peaks in the averages in early October, has continued to show abysmal action. The 1336 NYSE declines in Monday's trading and the 1207 falling stocks for Wednesday are hardly the sort of numbers that inspire confidence. Our daily breadth indicator is now 25 1…,.-J…,,o-..,.points..,ij.l!-,and….since….1heree1ists no market uswingon record where b.relad'.!t,hc…,,…,,-,….,–t has dropped this much. and the market then 'wenf on to new -peaks. ' (This is not to say that the averages have never moved to new highs after this sort of a breadth decline. Since breadth is a leading indicator. they have often done so. although in most cases the margin over the previous high was not great.) Likewise disturbing are the 194 52-week lows which emerged on Wednesday. They represented a bit over 9 of the total issues traded on that day. and this is a level which usually emerges well after the market has passed its zenith. There remain, of course, even after last week's weakness, a few indicators, most of them dealing with sentiment, which remain positive. One such is the level of mutual-fund cash which, the latest reports tell us, is, to say the least, currently ample. Advisory sentiment likewise has recently swung to bullish levels. Market action, however, tends to belie these figures. We have reached that point, it seems to us, a point which occurs in the mature stages of most major upswings, where it will be necessary for the mRrket to prove itself. The move below their October levels by most averages still falls a bit short of being decisive. One way that improved action could be demon!Jtrated would be for the major indices to hold around current levels and eventually rebase. There is. unfortunately, very little in last week's pattern which suggests the likelihood of this taking place. In one respect, action over the past few months, since early last fall, has been much like that of 1987. As was the case at that time. tops have built up with a rapidity totally atypical of market action prior to the late 1980's. This phenomenon—substantial market deterioration occurring in the space of a few weeks—is a new one and remains to be fully examined. What must be noted, though. in contrast to the pattern prior to the crash a couple of years ago. mmt tops appear to be small and; in many cases, indicate nothing more than a return to strong support, support. just above bases which still indicate higher objectives. However unpleasant possible upcoming I weakness may be. a fair number of stocks. we think. should reach levels at which they will be attractive buys. ANTHONY W. TABELL DELAFIELD. HARVEY. TABELL INC. Dow Jones Industrials 0200) 2561.26 S & P 500 (1200) 327.91 Cumulative Index (1/25/90) 4725.17 AWTebh No statement or expression of opinion or any other matter herein contained IS, or IS to be deemedto be, directly or Indirectly, an offer orthe solicitation 01 an offerto buy or sell any securrty referred to or mentioned The matter IS presented merely for the convenience of the subSCriber While we believe the sources of our information to be reliable, we In no way represent or guarantee the accuracy thereof nor of the statements made herein Any acllon to be taken by the subSCriber should be based on hiS own investigation and Information Delafield, Harvey, Tabellinc ,as a corporation and s officers or employees, may now have, or may later take, positions or trades In respect to any securities menlloned In thiS or any future Issue, and such pOSition may be different from any Vlews now or hereafter expressed In thiS or any other Issue Delafield, Harvey, Tabelllnc, which IS registered With the SEC as an Investment adVISor, may give advice to lIs Investment adVISOry and other customers Independently 01 any statements made m thiS or In any other Issue Further Informallon on any securrty mentioned herem IS available on request