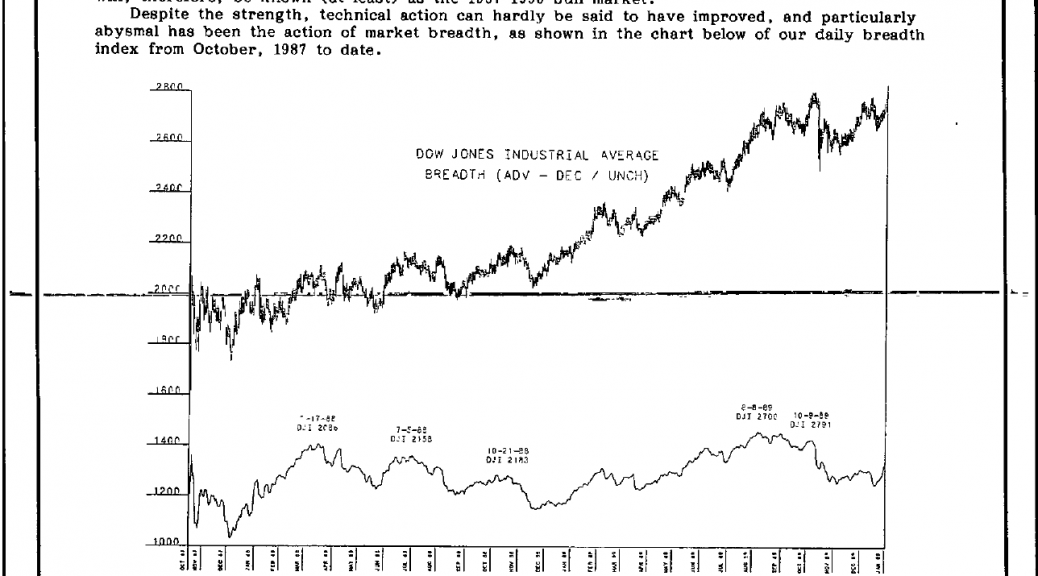 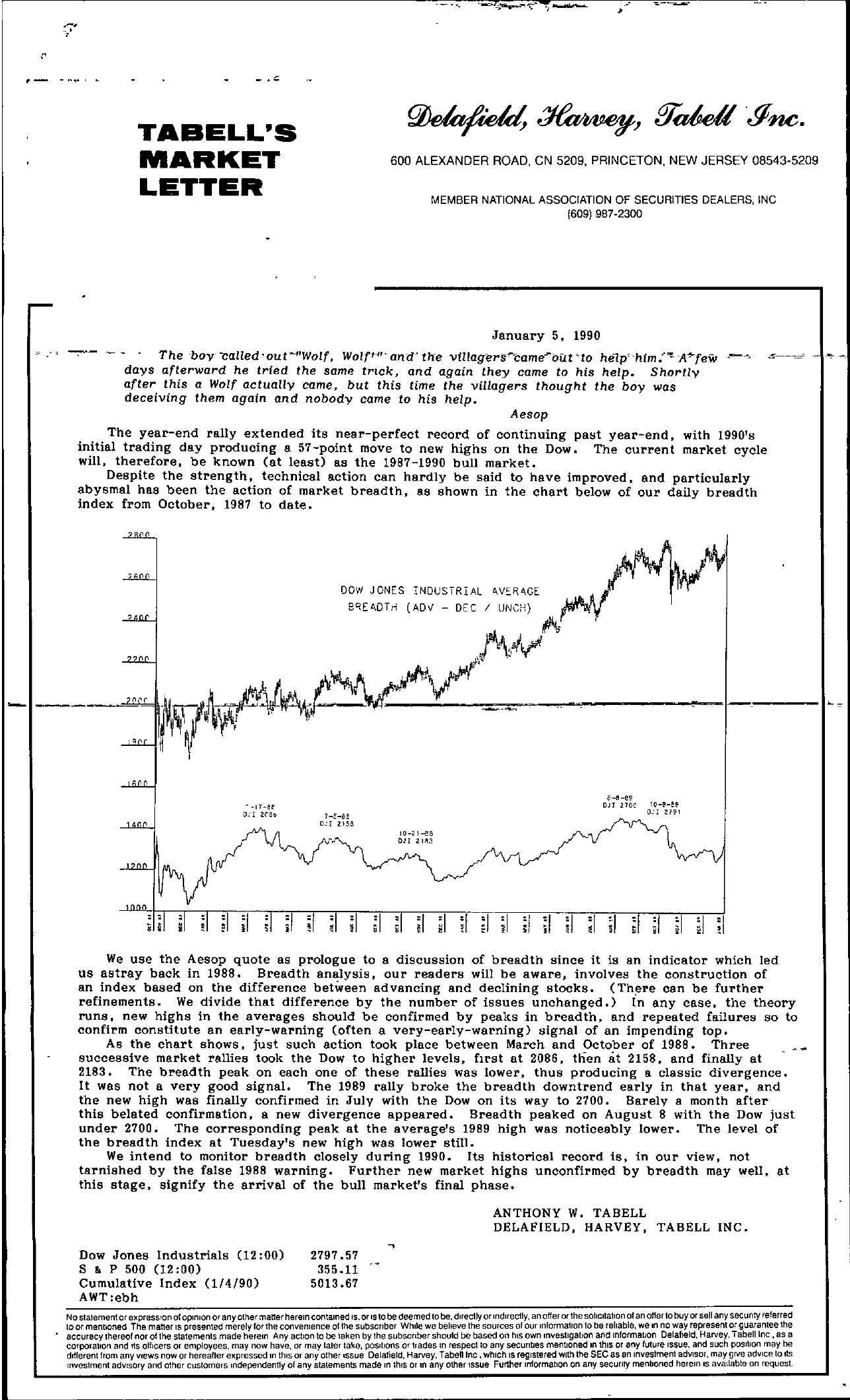 /' ,- TABELL'S MARKET LETTER 600 ALEXANDER ROAD, CN 5209, PRINCETON, NEW JERSEY 08543-5209 MEMBER NATIONAL ASSOCIATION OF SECURITIES DEALERS, INC 1609) 987-2300 January 5, 1990 The 'boy' Called' ou t -Wolf, Wolft anci th'e villagerlPCame-u t 'to he1p' hlm.c' A''few days afterward he tried the same trICk, and again they came to his help. Shortly after this a Wolf actually came, but this time the villagers thought the boy was deceiving them again and nobody came to his help. Aesop -' The year-end rally extended its near-perfect record of continuing past year-end, with 1990's initial trading day producing a 57-point move to new highs on the Dow. The current market cycle will, therefore, be known (at least) as the 1987-1990 bull market. Despite the strength, technical action can hardly be said to have improved, and particularly abysmal has been the action of market breadth, as shown in the chart below of our daily breadth index from October, 1987 to date. '-. DOW JONES INDUSTRIAL 4YcR4GE 8EDTri (ADv – DEC lUNCH) , ,liY – —— if-;'f\!t.'Jt -'l\v-J.,J-I!I\/or—- – – – – – I I –17a Dcl 2C3b 7-.5-ae on 21se IO-21-!!8 on 213 -s -e!' OJI 2700 lo–e 0.'1 271 i, 'iI We use the Aesop quote as prologue to a discussion of breadth since it is an indicator which led us astray back in 1988. Breadth anlysis, our readers will be aware, involves the construction of an index based on the difference between advancing and declining stocks. (Thre can be further refinements We divide that difference by the number of issues unchanged.) In any case, the theory runs. new highs in the averages should be confirmed by peaks in breadth, and repeated failures so to confirm constitute an early-warning (often a very-early-warning) signal of an impending top. As the chart shows, just such action took place between March and October of 1988. Three successive market rallies took the Dow to higher levels, f,rst at 2086, tlien at 2158, and finally at 2183. The breadth peak on each one of these rallies was lower, thus producing a classic divergence. It was not a very good signal. The 1989 rally broke the breadth downtrend early in that year, and the new high was finally confirmed in July with the Dow on its way to 2700. Barely a month after this belated confirmation, a new divergence appeared. Breadth peaked on August 8 with the Dow just under 2700. The corresponding peak at the average's 1989 high was noticeably lower. The level of the breadth index at Tuesday's new high was lower still We intend to monitor breadth closely during 1990. Its historical record is, in our view, not tarnished by the false 1988 warning. Further new market highs unconfirmed by breadth may well, at this stage, signify the arrival of the bull market's final phase. ANTHONY W. TABELL DELAFIELD, HARVEY, TABELL INC Dow Jones Industrials (12 00) S & P 500 (1200) Cumulative Index (114/90) AWTebh 2797.57 355 11 5013.67 No statement or expression of opinion or any other matter herein contained IS, or IS to be deemed to be, dlrectJyor Indirectly, an offer orthe sollcltallOn of an offer to buy or sell any security referred to or mentioned The matter IS presented merely for the convenience 01 the subscriber While we beheve the sources of our information 10 be reliable, we In no way represent or guarantee the accuracy thereof nor 01 the statements made herein Any action to be taken by the subSCriber should be based on hiS own Investigation and Information Delafield, Harvey, Tabellinc ,as a corporation and lis offICers or employees, may now have, or may later take, pOSitions or trades In respect to any securities mentioned In thiS or any future Issue, and such poSItion may be different from any views now or hereafter expressed In thiS or any other Issue Delafield, Harvey, Taben Inc, which IS registered With the SEC as an Investment adVIsor, may gIVe adVice to ItS Inves1ment adVISOry and other customers Independently 01 any statements made In thiS or In any other Issue Further information on any security menboned herein IS available on request