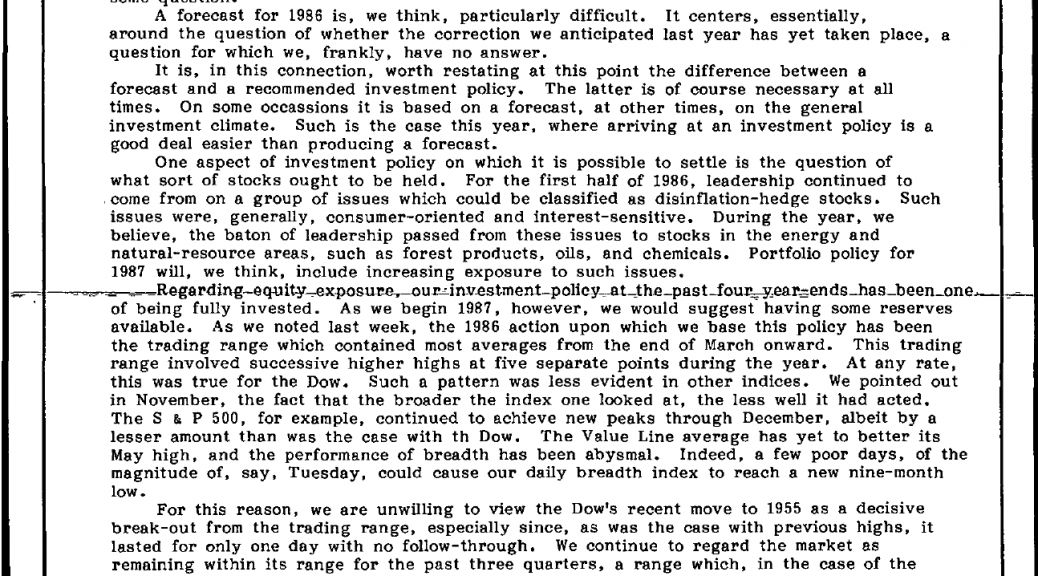 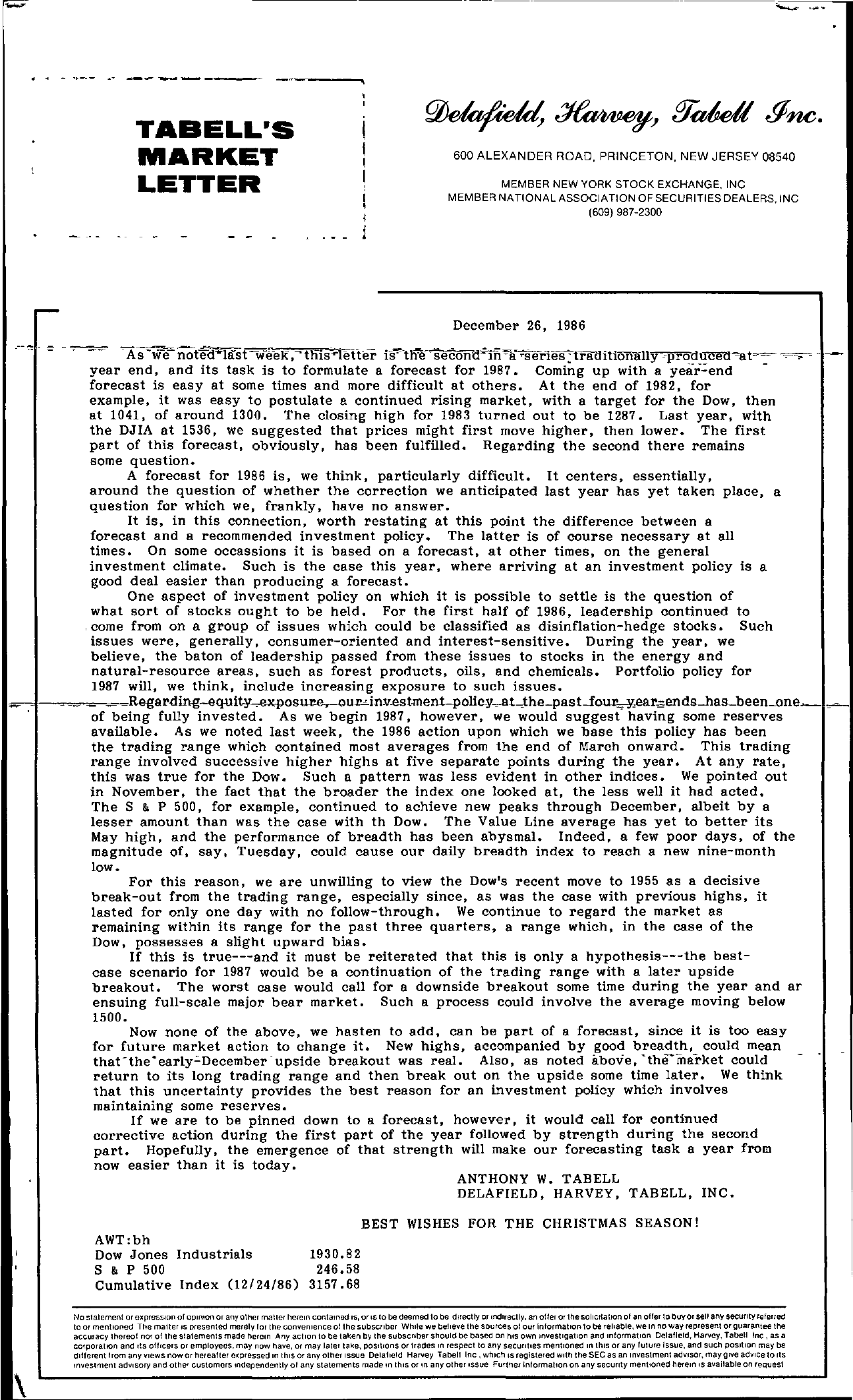 '. T TABELL-S MARKET LETTER 600 ALEXANDER ROAD, PRINCETON, NEW JERSEY 08540 MEMBER NEW YORK STOCK EXCHANGE, INC MEMBER NATIONAL ASSOCIATION OF SECURITIES DEALERS,INC (609) 987-2300 December 26, 1986 – -AS'W'e notedlast w-,,'eK ,- tllisletler is'tlfe SecontlIn1,ge-ries traaitionally prodat – – year end, and its task is to formulate a forecast for 1987. Coming up with a yearend forecast is easy at some times and more difficult at others. At the end of 1982, for example, it was easy to postulate a continued rising market, with a target for the Dow, then at 1041, of around 1300. The closing high for 1983 turned out to be 1287. Last year, with the DJIA at 1536, we suggested that prices might first move higher, then lower. The first part of this forecast, obviously, has been fulfilled. Regarding the second there remains some question. A forecast for 1986 is, we think, particularly difficult. It centers, essentially, around the question of whether the correction we anticipated last year has yet taken place, a question for which we, frankly, have no answer. It is, in this connection, worth restating at this point the difference between a forecast and a recommended investment policy. The latter is of course necessary at all times. On some occassions it is based on a forecast, at other times, on the general investment climate. Such is the case this year, where arriving at an investment policy is a good deal easier than producing a forecast. One aspect of investment policy on which it is possible to settle is the question of what sort of stocks ought to be held. For the first half of 1986, leadership continued to ,come from on a group of issues which could be classified as disinflation-hedge stocks. Such issues were, generally, consumer-oriented and interest-sensitive. During the year, we believe, the baton of leadership passed from these issues to stocks in the energy and natural-resource areas, such as forest products, oils, and chemicals. Portfolio policy for 1987 will, we think, include increasing exposure to such issues. Regardin-g-equityexpose,.-oul'dnvestment-policYLth,,pasLfoear;;;endshasbeenone of being fully invested. As we begin 1987, however, we would suggesf having some reserves available. As we noted last week, the 1986 action upon which we base this policy has been the trading range which contained most averages from the end of March onward. This trading range involved successive higher highs at five separate points during the year. At any rate, this was true for the Dow. Such a pattern was less evident in other indices. We pointed out in November, the fact that the broader the index one looked at, the less well it had acted. The S & P 500, for example, continued to achieve new peaks through December, albeit by a lesser amount than was the case with th Dow. The Value Line average has yet to better its May high, and the performance of breadth has been abysmal. Indeed, a few poor days, of the magnitude of, say, Tuesday, could cause our daily breadth index to reach a new nine-month low. For this reason, we are unwilling to view the Dow's recent move to 1955 as a decisive break-out from the trading range, especially since, as was the case with previous highs, it lasted for only one day with no follow-through. We continue to regard the market as remaining within its range for the past three quarters, a range which, in the case of the Dow, possesses a slight upward bias. If this is true—and it must be reiterated that this is only a hypothesis—the best- case scenario for 1987 would be a continuation of the trading range with a later upside breakout. The worst case would call for a downside breakout some time during the year and ar ensuing full-scale major bear market. Such a process could involve the average moving below 1500. Now none of the above, we hasten to add. can be part of a forecast, since it is too easy for future market action to change it. New highs, accompanied by good breadth, could mean that-the'earlyDecember-upside breakout was real. Also, as noted above, 'themarket could return to its long trading range and then break out on the upside some time later. We think that this uncertainty provides the best reason for an investment policy which involves maintaining some reserves. If we are to be pinned down to a forecast, however, it would call for continued corrective action during the first part of the year followed by strength during the second part. Hopefully, the emergence of that strength will make our forecasting task a year from now easier than it is today. ANTHONY W. T ABELL DELAFIELD, HARVEY, TABELL, INC. AWTbh Dow Jones Industrials S & P 500 Cumulative Index (2/24/86) BEST WISHES 1930.82 246.58 3157.68 FOR THE CHRISTMAS SEASON! No statement or expresSIOn of OPinion or any other maHer herein contamed IS, or IS 10 be deemed 10 be directly Of Indirectly. an oHer or the solicitation of an offer to buyor sell any secuflly referred 10 or mentioned The mailer IS presented merely for the convemence of the subscriber While we believe the sources of our Information to be reliable, we In noway represent or guarantee the accuracy thereol nor 01 the statements made herein Any action to be tal(en by the subSCriber Should be based on hiS own investigation and mformatlon Delafield, Harvey, Tabell Inc, as a corporatIOn and ItS officers or employees, may now have, or may later take, POSitions or trades In respect to any secufl\les mentioned In thiS or any futuro Issue, and such position may be dltferent from any views nowor hereafter c(pressed In thiS or any olhellssue Delalleld Harvey Tabel1 Inc, which IS registered with the SECas an Investment advrsor, may give advice to ItS investment adVISOry and othe' customers mdependenlly of any statements made m thiS or rn any other Issue Further InlormatlOn on any security men\loned herein IS avallabte on request \