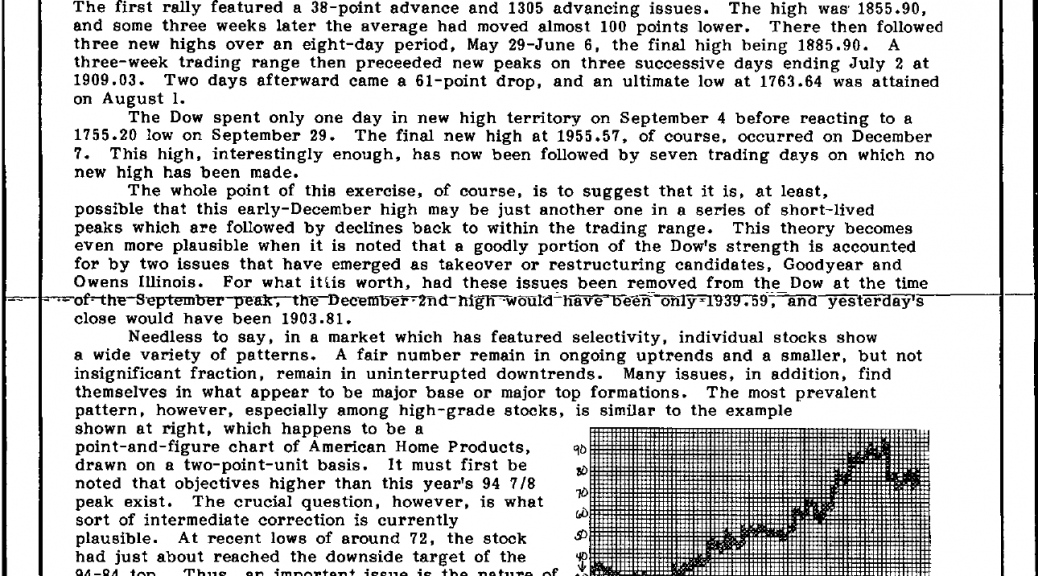 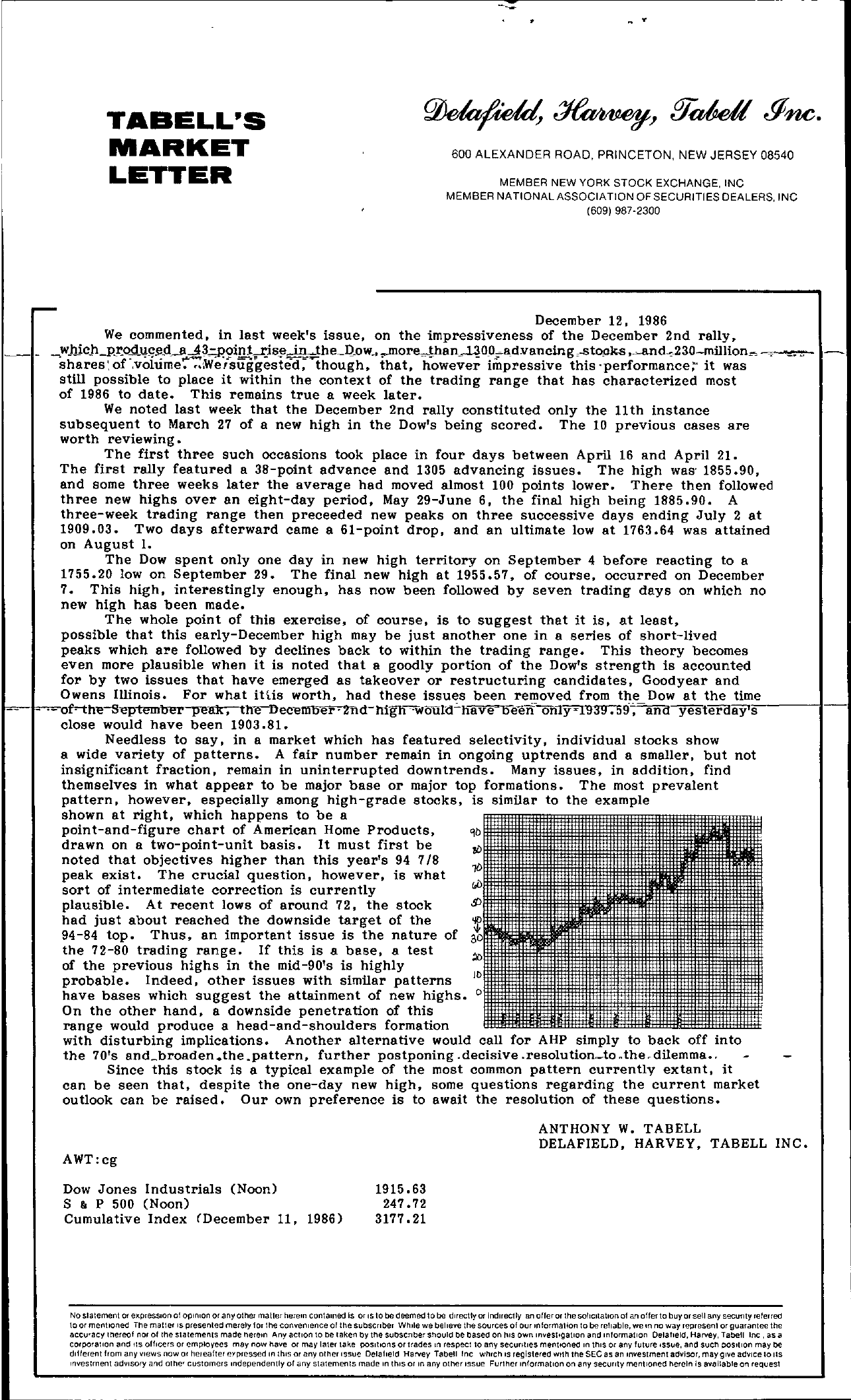 TABELL'S MARKET LETTER -.- . 600 ALEXANDER ROAD, PRINCETON, NEW JERSEY 08540 MEMBER NEW YORK STOCK EXCHANGE, INC MEMBER NATIONAL ASSOCIATION OF SECURITIES DEALERS, INC (6091 9872300 December 12. 1986 We commented. in last week's issue. on the impressiveness of the December 2nd rally. -wJlkhRroducJ!.dJ.33.JloiniJ'ise.Jn….theD.ow. or-than.J..300ad,,ancing ,.stOjlks .and.230-million …… – – – tL– – – – – -rl' – ……— -. — sharesoLvoltime. ,Weisuggested; though. that. however impressive this 'performance it was still possible to place it within the context of the trading range that has characterized most of 1986 to date. This remains true a week later. We noted last week that the December 2nd rally constituted only the 11th instance subsequent to March 27 of a new high in the Dow's being scored. The 10. previous cases are worth reviewing. The first three such occasions took place in four days between April 16 and April 21. The first rally featured a 38-point advance and 130.5 advancing issues. The high was' 1855.90.. and some three weeks later the average had moved almost 10.0. points lower. There then followed three new highs over an eight-day period. May 29-June 6. the final high being 1885.90.. A three-week trading range then preceeded new peaks on three successive days ending July 2 at 190.9.03. Two days afterward came a 61-point drop. and an ultimate low at 1763.64 was attained on August 1. The Dow spent only one day in new high territory on September 4 before reacting to a 1755.20. low on September 29. The final new high at 1955.57. of course. occurred on December 7. This high. interestingly enough. has now been followed by seven trading days on which no new high has been made. The whole point of this exercise. of course. is to suggest that it is. at least. possible that this early-December high may be just another one in a series of short-lived peaks which are followed by declines back to within the trading range. This theory becomes even more plausible when it is noted that a goodly portion of the Dow's strength is accounted for by two issues that have emerged as takeover or restructuring candidates. Goodyear and – .- Owens Illinois. For what iHis worth. oHhl!–Sl!ptemtrer-pe-.theDec'E!lIfljer' had 2f1d- htihgeHse–wiOs\sluledslibaveeenoereermf oovnelyd from the Dow nf31r.1i9; – a n d at the time yesterday';;;s—I close would have been 190.3.81. Needless to say. in a market which has featured selectivity, individual stocks show a wide variety of patterns. A fair number remain in ongoing uptrends and a smaller. but not insignificant fraction, remain in uninterrupted downtrends. Many issues. in addition. find themselves in what appear to be major base or major top formations. The most prevalent pattern, however. especially among high-grade stocks. is similar to the example shown at right. which happens to be a point-and-figure chart of American Home Products, 9b drawn on a two-point-unit basis. It must first be noted that objectives higher than this year's 94 7/8 peak exist. The crucial question. however. is what sort of intermediate correction is currently plausible. At recent lows of around 72. the stock had just about reached the downside target of the 94-84 top. Thus. an important issue is the nature of the 72-80. trading range. If this is a base. a test of the previous highs in the mid -9o.'s is highly probable. Indeed. other issues with similar patterns have bases which suggest the attainment of new highs. On the other hand. a downside penetration of this range would produce a head-and-shoulders formation with disturbing implications. Another alternative would call for AHP simply to back off into the 7Q's andbroaden.the .pattern. further postponing .decisive ,resolutionto .the,dilemma .. Since this stock is a typical example of the most common pattern currently extant, it can be seen that, despite the one-day new high. some questions regarding the current market outlook can be raised. Our own preference is to await the resolution of these questions. AWTcg ANTHONY W. TABELL DELAFIELD. HARVEY. TAB ELL INC. Dow Jones Industrials (Noon) S & P 50.0. (Noon) Cumulative Index (December 11, 1986) 1915.63 247.72 3177.21 No slalement Of expression ot opinion or any other matter herem contained Is or IS to be deemed to be directly Of Indirectly an offer or the soliCitation of an offer to buy or sell any secunty referred 10 or mentioned The mailer IS presented merely for the convenience 01 the subSCriber White we believe the sources of our Information to be reliable, weln no way represent or guarantee the accuacy thereof nor of the statements made herein Any action to be taken by the subSCriber should be based on hiS own Inves\!gatlon and information Delafield, Harvey, Tabell Inc, as a corporation and ItS officers or employees may now have or may later take positions or trades In respeclto any securities mentioned In thiS or any future Issue, and such POSition may be dltlen!nt from any views nowor hOlea/ter erplessed In thiS or any other Issue Delatleld Harvey Tabel! Inc whrCh IS registered With the SEC as an Investment advisor, may give adVice to ItS ,vestment adVISOry and othe' customers Independently of any statements made In thiS or In any other Issue Further Information on any security mentioned herein Is available on request