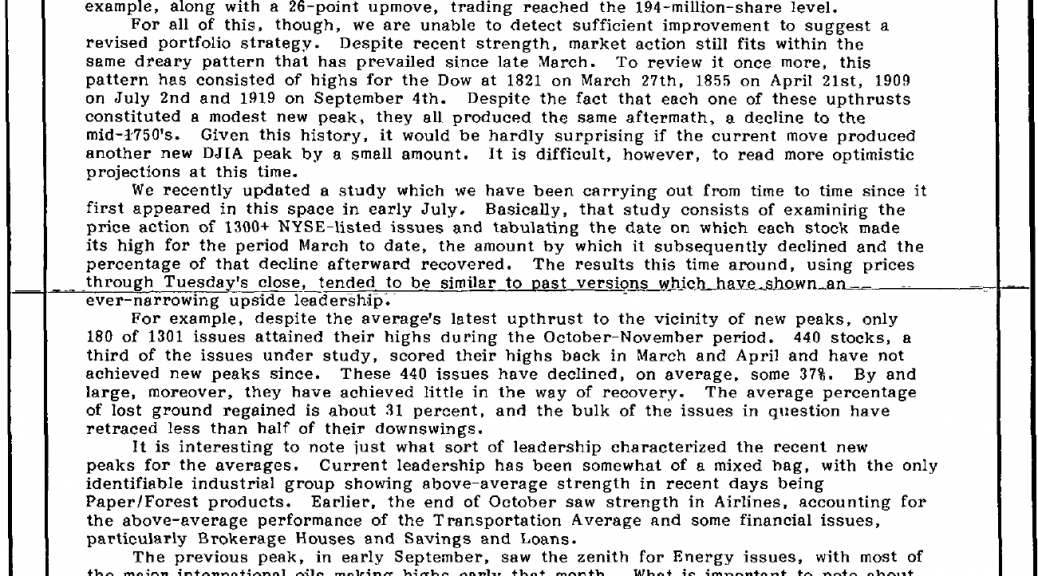 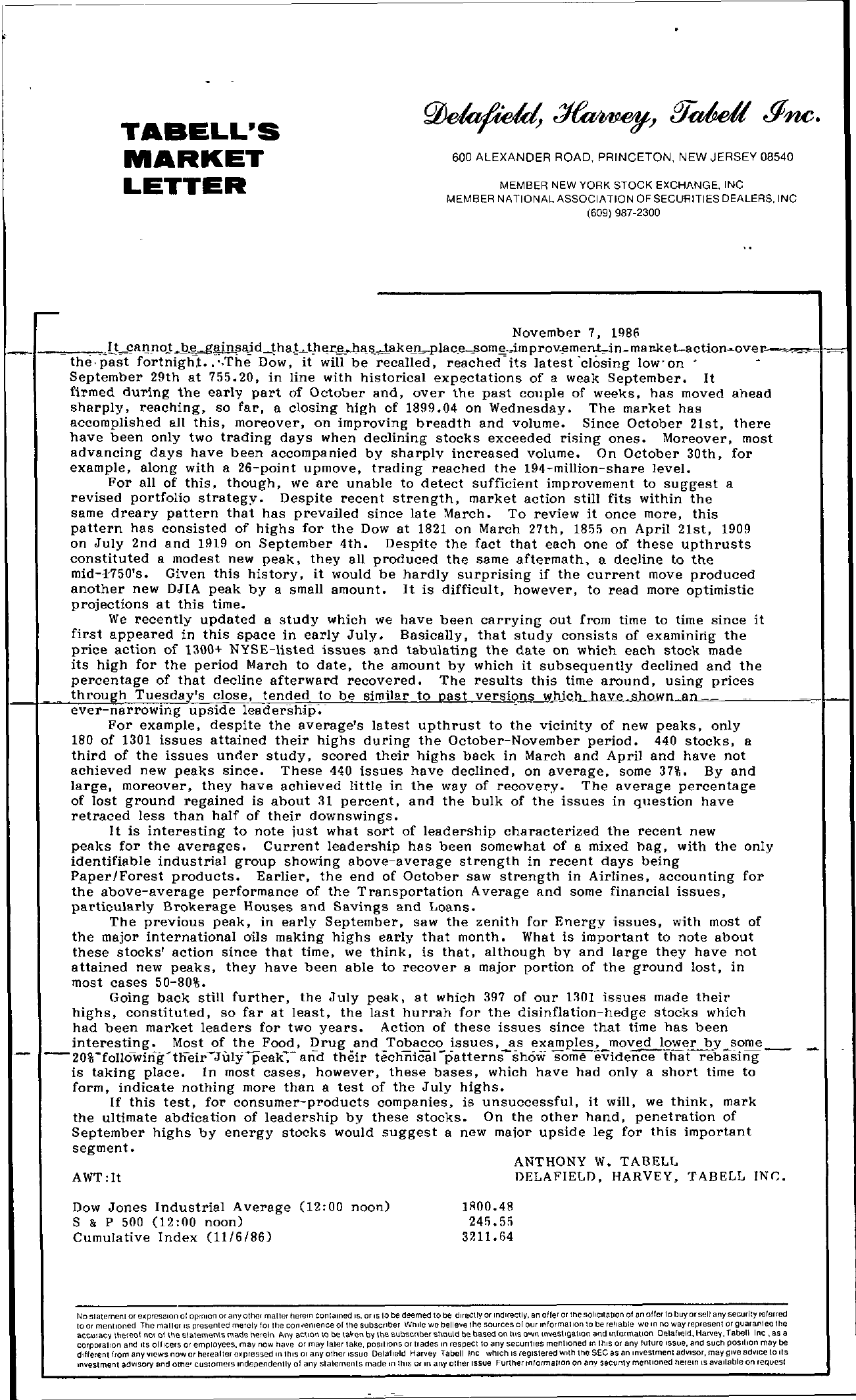 TABELL'S MARKET LETTER 600 ALEXANDER ROAD, PRINCETON, NEW JERSEY 08540 MEMBER NEW YORK STOCK EXCHANGE, INC MEMBER NATIONAL ASSOCIATION OF SECURITIES DEALERS, INC (609) 987-2300 – November 7, 1986 1.Ucal)noJ.!.!k,g!lins!ljd!ha!ther!L..ha,,takelk-PJace.-somgimprovementnmar..ketactionovel'e-,,,I the'past fortnigh,t . .The Dow, it will be recalled, reached-its latest closing low'on . September 29th at 755.20, in line with historical expectations of a weak September. It firmed during the early part of October and, over the past couple of weeks, has moved ahead sharply, reaching, so far, a closing high of 1899.04 on Wednesday. The market has accomplished all this, moreover, on improving breadth and volume. Since October 21st, there have been only two trading days when declining stocks exceeded rising ones. Moreover, most advancing days have been accompanied by sharply increased volume. On October 30th, for example, along with a 26-point upmove, trading reached the 194-million-share level. For all of this, though, we are unable to detect sufficient improvement to suggest a revised portfolio strategy. Despite recent strength, market action still fits within the same dreary pattern that has prevailed since late March. To review it once more, this pattern has consisted of highs for the Dow at 1821 on March 27th, 1855 on April 21st, 1909 on July 2nd and 1919 on September 4th. Despite the fact that each one of these upthrusts constituted a modest new peak, they all produced the same aftermath, a decline to the mid–1750's. Given this history, it would be hardly surprising if the current move produced another new DJIA peak by a small amount. It is difficult, however, to read more optimistic projections at this time. We recently updated a study which we have been carrying out from time to time since it first appeared in this space in early July. Basically, that study consists of examinirig the price action of 1300 NYSE-listed issues and tabulating the date on which each stock made its high for the period March to date, the amount by which it subsequently declined and the percentage of that decline afterward recovered. The results this time around, using prices through Tuesday's close, tended to be similar to past versions wltic.LhaY..e.-.shownanL..– I ever narrowing upside leadership – For example, despite the average's latest upthrust to the vicinity of new peaks, only 180 of 1301 issues attained their highs during the October-November period. 440 stocks, a third of the issues under study, scored their highs back in March and April and have not achieved new peaks since. These 440 issues have declined, on average, some 37. By and large, moreover, they have achieved little in the way of recovery. The average percentage of lost ground regained is ahout n percent, anl the bulk of the issues in question have retraced less than half of their downswin gs. It is interesting to note iust what sort of leadership characterized the recent new peaks for the averages. Current leadership has been somewhat of a mixed hag, with the only identifiable industrial group showing above-average strength in recent days being PaperlForest products. Earlier, the end of October saw strength in Airlines, accounting for the above-average performance of the Transportation Average Rnd some financial issues, particularly Brokerage Houses anl Savings and Loans. The previous peak, in early September, saw the zenith for Energy issues, with most of the major international oils making highs early that month. What is important to note about these stocks' action since that time, we think, is that, although by and large they have not attained new peaks, they have been able to recover a major portion of the ground lost, in most cases 50-80. Going back still further, the July peak, at which 397 of our 101 issues made their highs, constituted, so far at least, the last hurrah for the disinflation-hedge stocks which had been market leaders for two years. Action of these issues since that time has been interesting. Most of the Food, Drug and Tobacco issues, as examples, moved lower by some -20-follo-wini(tneir-Julypeak-;- arid their technical patterns-show sorii'eevidencethatre'basing – – is taking place. In most cases, however, these bases, which have had only a short time to form, indicate nothing more than a test of the July highs. If this test, for consumer-products companies, is unsuccessful, it will, we think, mark the ultimate abdication of leadership by these stocks. On the other hand, penetration of September highs by energy stocks would suggest a new maior upside leg for this important segment. ANTHONY W. TABELL AWTlt DELAFIELD, HARVEY, TABELL INC;. Dow Jones Industrial Average (1200 noon) S & P 500 (1200 noon) Cumulative Index (1116/86) 1ROO.48 24.5 3211.64 No statement or epreSSlon 01 opinion or any othor mal1er herem conlatned 15, or IS \0 be deemed to be dlreclly or indirectly, an offer or the soliCitation of an o!for to buy or sell any security referred toar mentIOned The mailer IS presented melcly for the con,enlence 01 the subSCriber While we believe the sources 01 our mfarmaiion 10 be reliable we In no way represent or guaranteo Ihe accuracy \he1801 nOf 01 1M statements made heH,ln (.'01'1 aC\on 10 be \a1nlrl b'l 1M subscnber should be based on hiS o'l(n mvesllga\lm and InlormallOn Delafield, Harvey, Tabell Inc, as a corporal Ion and lis ollicers Of employees, may now have or may laler lake, positions or Hades In respect to any secunlles menlloned In lhlS Of any luture Issue, and such pOSition may be dlflerent from any vu.'ws now or helealler expressed In Ihls or anyolher Issue Delafield Harvey labell Inc which IS registered With lhe SECas an Investment adVisor, may give adVice to Its Investment adVISOry and othe' cusl0mers Independenlly 01 any stalements made In Ihls or In any other Issue Further fnformaUon on any secunty mentioned herein IS available on reQuesl