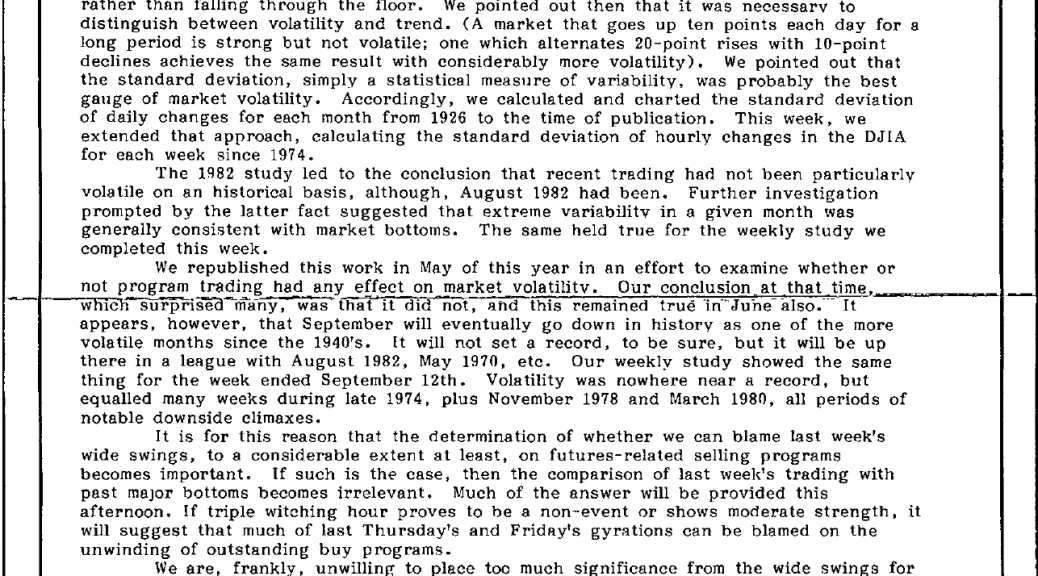 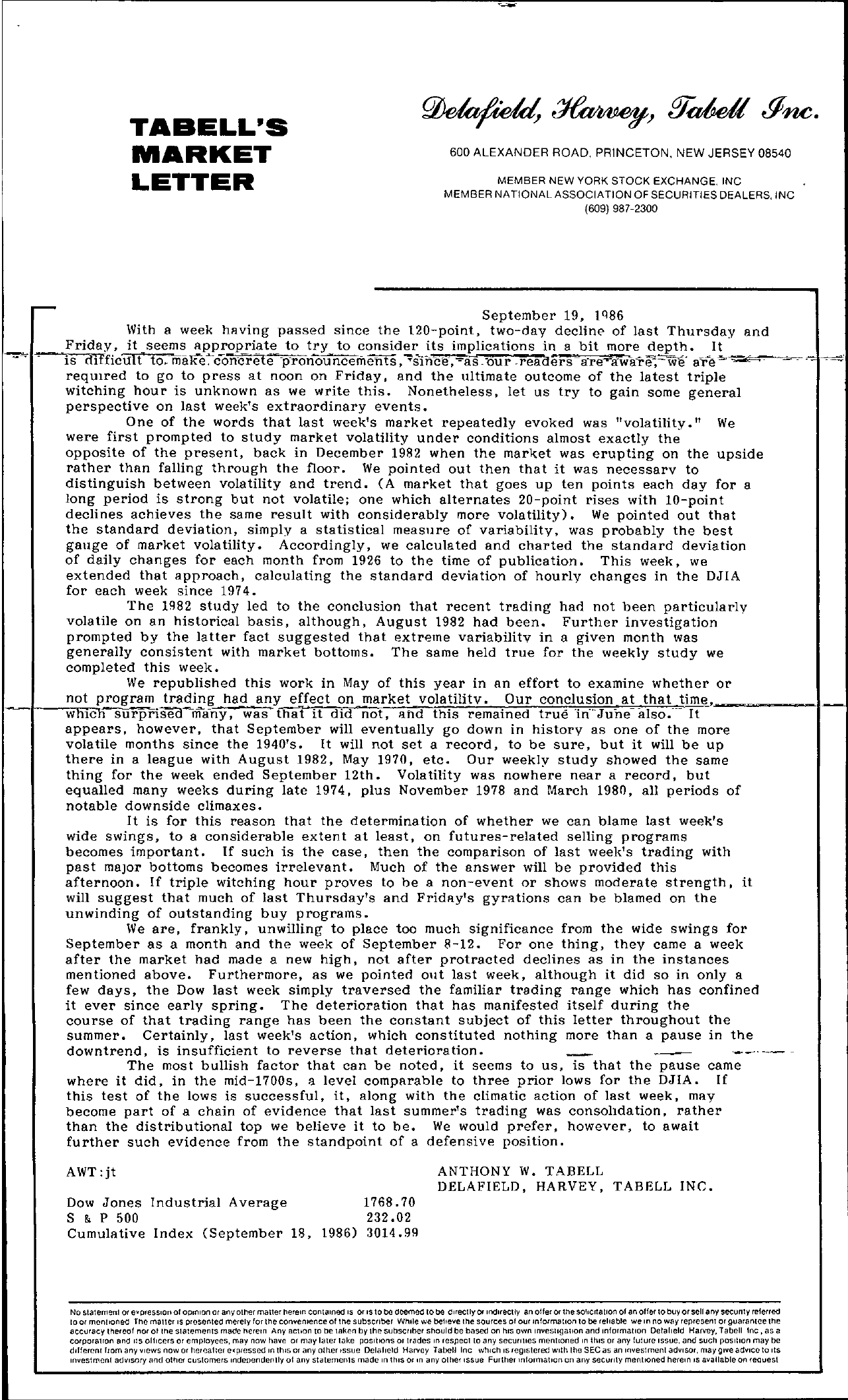 TABELL'S MARKET LETTER 600 ALEXANDER ROAD, PRINCETON, NEW JERSEY 08540 MEMBER NEW YORK STOCK EXCHANGE, INC MEMBER NATIONAL ASSOCIATION OF SECURITIES DEALERS, INC (609) 987-2300 September 19, I QS6 With a week having passed since the 120-point, two-day decline of last Thursday and –'I'''''II-''i''Fs'r-'i;iddrariy''f,f'iciutlt steoe-mmasKea-p-p–rcoonp'rCriaettee to try -p-ronoll ntcoemcoennstisd, ers-itis nimsplicamtri ons in a readers ba-irte…m.aorweadrepth.areIt-,,;—— reqUlred to go to press at noon on Friday, and the ultimate outcome of the latest triple witching hour is unknown as we write this. Nonetheless, let us try to gain some general perspective on last week's extraordinary events. One of the words that last week's market repeatedly evoked was volatility. We were first prompted to study market volatility under conditions almost exactly the opposite of the present, back in December 1982 when the market was erupting on the upside rather than falling through the floor. We pointed out then that it was necessarv to distinguish between volatility and trend. (A market that goes up ten points each day for a long period is strong but not volatile; one which alternates 20-point rises with 10-point declines achieves the same result with considerably more volatility). We pointed out that the standard deviation, simply a statistical measure of variability, was probably the best gauge of market volatility. Accordingly, we calculated and charted the standard deviation of daily changes for each month from 1926 to the time of publication. This week, we extended that approach, calculating the standard deviation of hourly changes in the DJIA for each week since 1974. The 1982 study led to the conclusion that recent trading had not been particularly volatile on an historical basis, although, August 1982 had been. Further investigation prompted by the latter fact suggested that extreme variabilitv in a given month was generally consistent with market bottoms. The same held true for the weekly study we completed this week. We republished this work in May of this year in an effort to examine whether or not program trading had any effect on market volatilitv. Our conclusion at that time,I wmcn surpriseam-any, was-that it did not, and this remained true in'June also- It appears, however, that September will eventually go down in historv as one of the more volatile months since the 1940's. It will not set a record, to be sure, but it will be up there in a league with August 1982, May 1970, etc. Our weekly study showed the same thing for the week ended September 12th. Volatility was nowhere near a record, but equalled many weeks during late 1974, plus November 1978 and March 1980, all periods of notable downside climaxes. It is for this reason that the determination of whether we can blame last week's wide swings, to a considerable extent at least, on futures-related selling programs becomes important. If such is the case, then the comparison of last week's trading with past major bottoms becomes irrelevant. Much of the answer will be provided this afternoon. If triple witching hour proves to be a non-event or shows moderate strength, it will suggest that much of last Thursday's and Friday's gyrations can be blamed on the unwinding of outstanding buy programs. We are, frankly, unwilling to place too much Significance from the wide swings for September as a month and the week of September 8-12. For one thing, they came a week after the market had made a new high, not after protracted declines as in the instances mentioned above. Furthermore, as we pointed 011t last week, although it did so in only a few days, the Dow last week simply traversed the familiar trading range which has confined it ever since early spring. The deterioration that has manifested itself during the course of that trading range has been the constant subject of this letter throughout the summer. Certainly, last week's action, which constituted nothing more than a pause in the downtrend, is insufficient to reverse that deterioration. The most bullish factor that can be noted, it seems to us, is that the pause came where it did, in the mid-1700s, a level comparable to three prior lows for the DJIA. If this test of the lows is successful, it, along with the climatic action of last week, may become part of a chain of evidence that last summer's trading was consolIdation, rather than the distributional top we believe it to be. We would prefer, however, to await further such evidence from the standpoint of a defensive position. AWTjt Dow Jones Industrial Average 1768.70 S & P 500 232.02 Cumulative Index (September 18, 1986) 3014.99 ANTHONY W. TABELL DELAFIELD, HARVEY, TAB ELL INC. NO statement 01 epresslon 01 oplOlOn or any other mailer herem conlillned IS or IS to be deemed to be directly Of Indirectly an oHer or the sohcrtatlon 01 an oller to buy or sell any security referred oor mentIOned The maller IS plOscnted merely lor the convemenceof the subSCriber While we behave the sources of our mformallon to be reliable we In no way represent or guarantee the accuracy theroo! nor 01 the slatcmQnts made herem Any aelion to be laken by the Subscllher should be based on hIS own Inveshgallon and mformatlon Delafield Harvey, labell tnc, as a corporatron and lIS olllcCIS or employees, may now have or may later take positions or trades In respect toany seCUrities mentioned In thiS or any future Issue, and such POSition may be different flom any views now or helIJafter e)ressedln thiS or any other Issue Detllletd Hlrvey label! tnc which IS registered With the SEC as an Investment adVisor, may give adVice to Its Inyestment adVisory and other customers Independently of any statements made In thiS Olin any other Issue Further mlormatlon on any security mentioned herein IS available on request