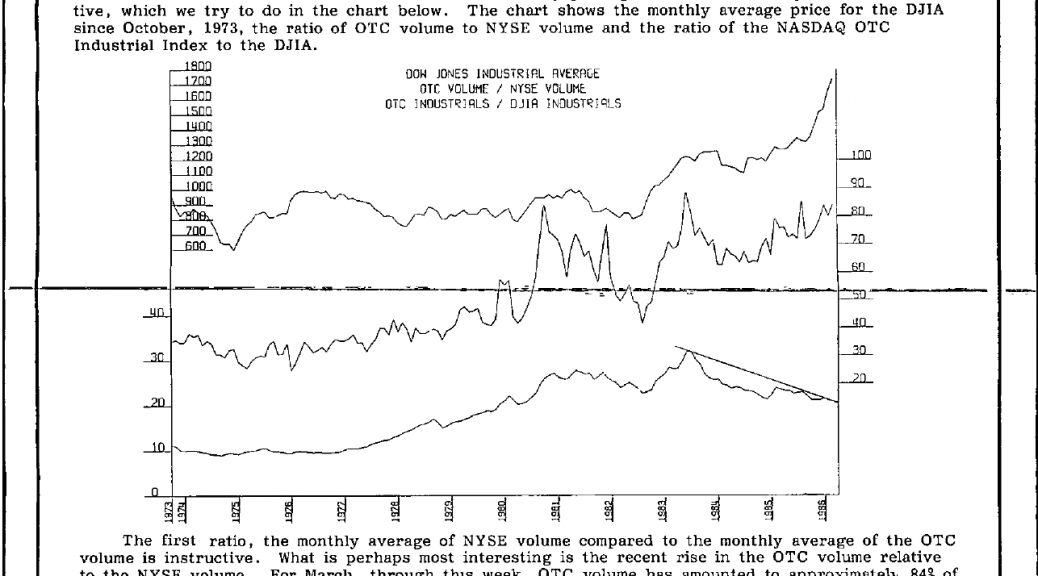 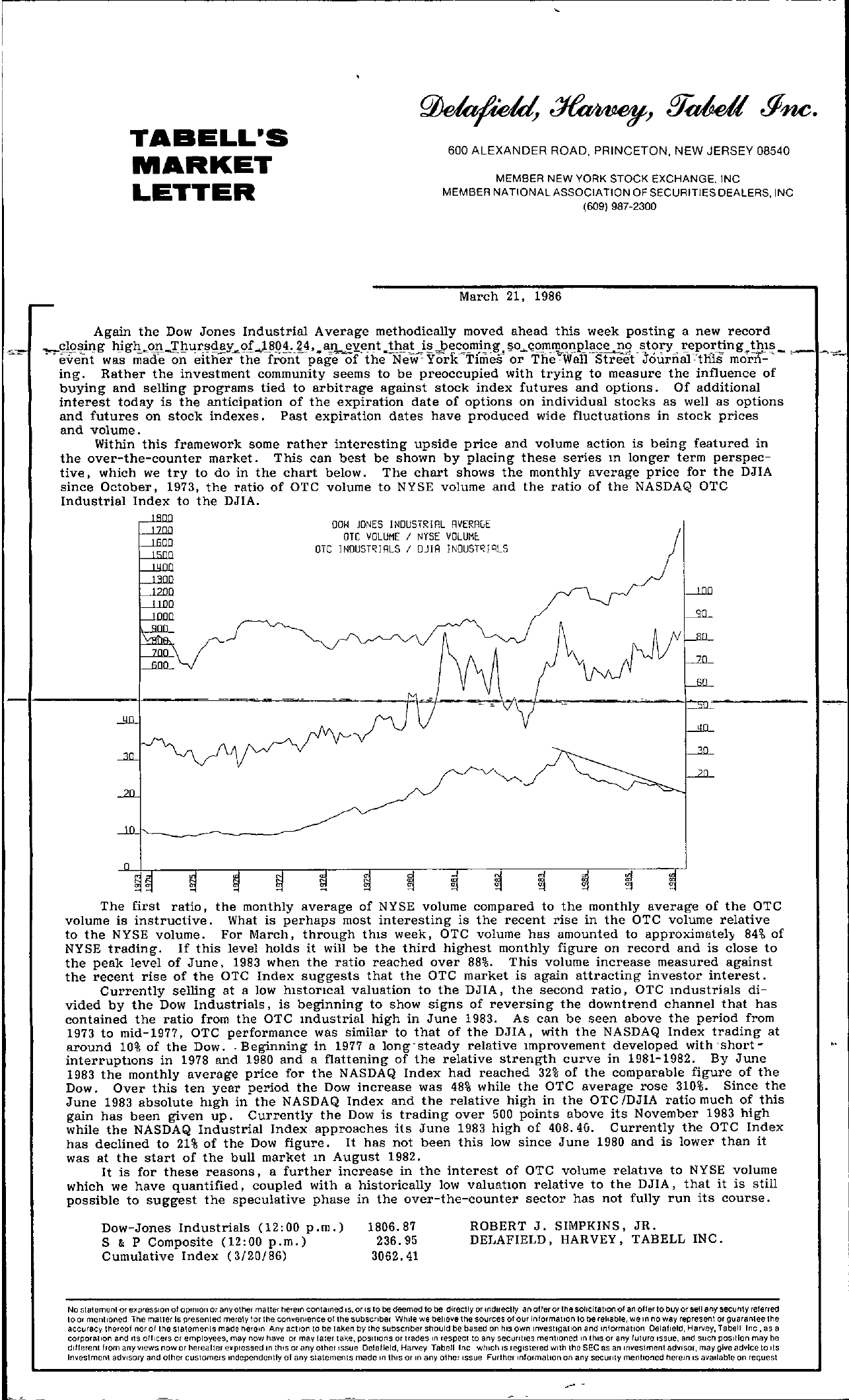 TABELL'S MARKET LETTER 600 ALEXANDER ROAD, PRINCETON, NEW JERSEY 08540 MEMBER NEW YORK STOCK EXCHANGE, INC MEMBER NATIONAL ASSOCIATION OF SECURITIES DEALERS, INC (6091987-2300 March 21. 1986 Again the Dow Jones Industrial Average methodically moved ahead this week posting a new record tlQirlg H.higQ.on..r!)urIay()i1804. an event that isbecoming oGomlIlonplace no story reporting thIS cuts.. event was made on either therranf page of ihe'-lfe YorkTmes' or TheWaI1-Street -JournBi morrt- . – ing. Rather the investment community seems to be preoccupied with trying to measure the influence of buying and selling programs tied to arbitrage against stock index futures and options. Of additional interest today is the anticipation of the expiration date of options on individual stocks as well as options and futures on stock indexes. Past expiration dates have produced wide fluctuations in stock prices and volume. Within this framework some rather interesting upside price and volume action is being featured in the over-the-counter market. This can best be shown by placing these series m longer term perspec- tive. which we try to do in the chart below. The chart shows the monthly average price for the DJIA since October. 1973, the ratio of OTC volume to NYSE volume and the ratio of the NASDAQ OTC Industrial Index to the DJIA. DOW JONES INDUSTR!RL RVERRGE OTC VOLUME / NY5E VOLUME OTC lNOU5TlRLS / DJ1R lNOUSTlqLS The first ratio, the monthly average of NYSE volume compared to the monthly average of the OTC volume is instructive. What is perhaps most interesting is the recent rise in the GTe volume relative to the NYSE volume. For March, through thIS week, OTC volume has amounted to approximately 84 of NYSE trading. If this level holds it will be the third highest monthly figure on record and is close to the peak level of June, 1983 when the ratio reached over 88. This volume increase measured against the recent rise of the OTC Index suggests that the OTC market is again attracting investor interest. Currently selling at a low hlstorlCal valuation to the DJIA. the second ratio. OTC mdustrials di- vided by the Dow Industrials, is beginning to show signs of reversing the downtrend channel that has contained the ratio from the OTC mdustrial high in June 1983. As can be seen above the period from 1973 to mid-1977, OTC performance was similar to that of the DJIA, with the NASDAQ Index trading at around 10 of the Dow. Beginning in 1977 a long-steady relative Improvement developed with 'shortinterruptIOns in 1978 and 1980 and a flattening of the relative strength curve in 1981-1982. By June 1983 the monthly average price for the NASDAQ Index had reached 32 of the comparable figure of the Dow. Over this ten year period the Dow increase was 48 while the OTC average rose 310. Since the June 1983 absolute hIgh in the NASDAQ Index and the relative high in the OTC IDJIA ratio much of this gain has been given up. Currently the Dow is trading over 500 points above its November 1983 high while the NASDAQ Industrial Index approaches its June 1983 high of 408.40. Currently the OTC Index has declined to 21 of the Dow figure. It has not been this low since June 1980 and is lower than it was at the start of the bull market m August 1982. It is for these reasons, a further increase in the interest of OTe volume relahve to NYSE volume which we have quantified, coupled with a historically low valuatIOn relative to the DJIA. that it is still possible to suggest the speculative phase in the over-the-counter sector has not fully run its course. Dow-Jones Industrials (1200 p.m.) S & P Composite (12 00 p.m.) Cumulative Index (3/20/86) 1806.87 236.95 3062.41 ROBERT J. SIMPKINS. JR. DELAFIELD. HARVEY. TABELL INC. No sl81emenl or expresSion 01 OPinion or any other maUer herein contained IS, or IS to be deemed 10 be directly or indirectly an olfer Of the soilc!tallon of an oller to buy or sell any security referred loor montloned The mal1er Is presented meraly for the convenlonce of thesubscnber While we believe the sources of our Information to berehable, we In no way represent or guarantee the accuracy tMmof nor of the statements made herGm Any action to be taken by the subSCriber Should be based on hiS own investigation and mformallon Delafield, Harvey, Tabel! Inc, as a corporation and ItS officers Of employees, may now have Of may later lake, positions or trades II'! respect to any securities mentioned II'! thiS or any future Issue, and such pOSItion may be dltferent from anyvlcws now or herealter cpressed In thiS or any other Issue Delafield, Harvey Tabell tnc which IS registered With tho SEC as an Investment adVisor, mayglva advice to ItS –Investment adVISOry and other CUSlOmers IndGpendcnlty of any slatemonlS made In thiS or In any other ISSue Further InformatIOn on any security mentroned herem IS available on request