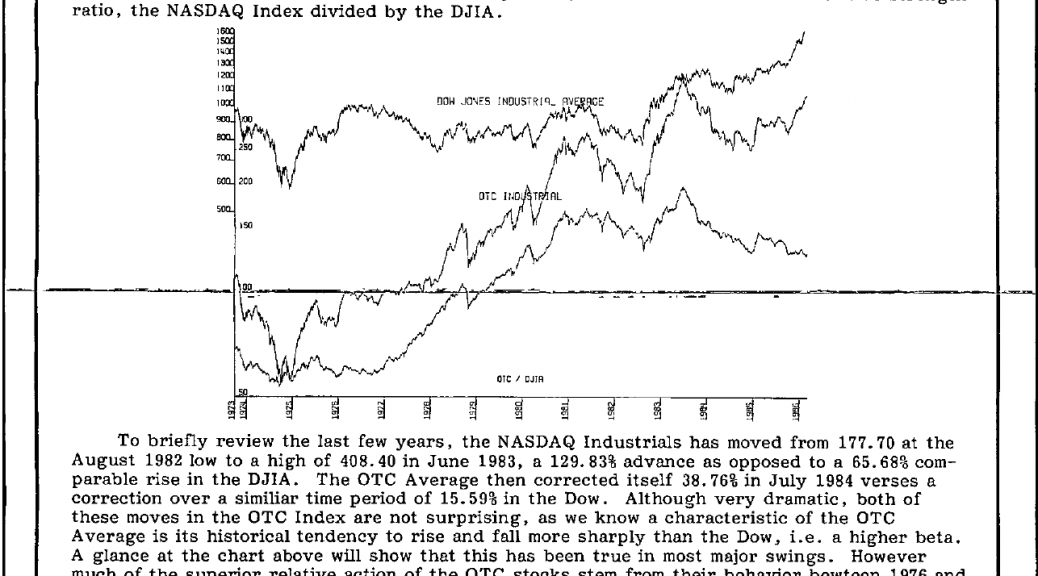 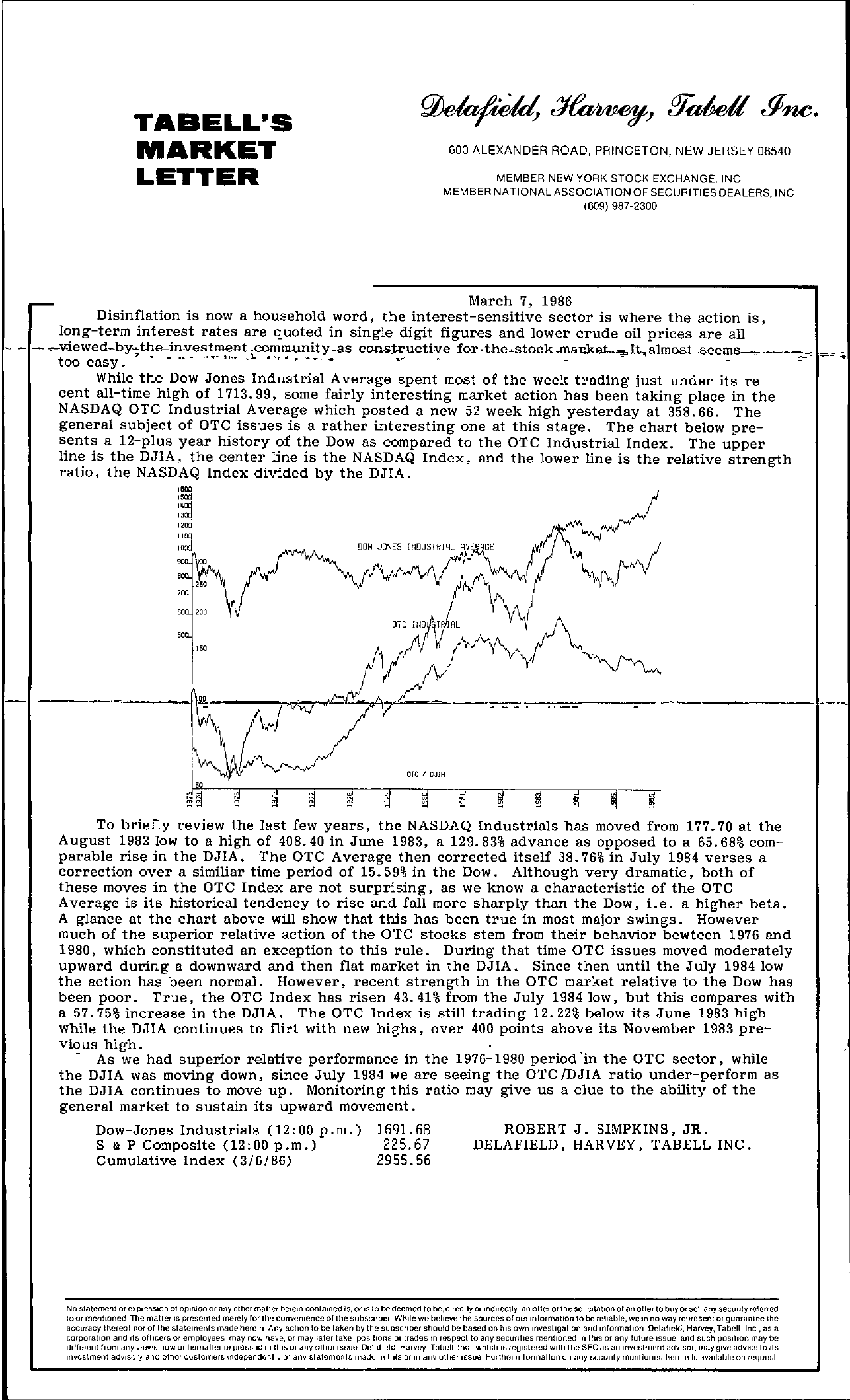 TABELL'S MARKET LETTER 600 ALEXANDER ROAD, PRINCETON, NEW JERSEY 08540 MEMBER NEW YORK STOCK EXCHANGE, INC MEMBER NATIONAL ASSOCIATION OF SECURITIES DEALERS, INC (609) 987-2300 March 7, 1986 Disinflation is now a household word, the interest-sensitive sector is where the action is, long-term interest rates are quoted in single digit figures and lower crude oil prices are all – – – .,t.o,.oveieawseyd-.b1yt…h.e–i.m- Te…s..t-m.e'n-t-.;comm.. un….i..ty-.as cons.t..r..–ucti;ve-forthe…stock-maI;ket.-.It,almost -see-ms,.,..I While the Dow Jones Industrial Average spent most of the week trading just under its recent all-time high of 1713.99, some fairly interesting market action has been taking place in the NASDAQ OTC Industrial Average which posted a new 52 week high yesterday at 358.66. The general subject of aTC issues is a rather interesting one at this stage. The chart below pre- sents a 12-plus year history of the Dow as compared to the OTC Industrial Index. The upper line is the DJIA, the center line is the NASDAQ Index, and the lower line is the relative strength ratio, the NASDAQ Index divided by the DJIA. J ('I' jBOO. \ ' !'Y\700 250 NVj'rj rV-A,D(OV .,\,,IE1'S '.1.NJD'U.\Sf,\;'L;1,,V,\;,'oE\\I1..tI! \ I.,,'\..(\.J V .. 200 '50 r \;\j( ' \OTe llioy'jTP. AL /v V J.,-/,v, lit (J (VI' \'\'-.; I / …… .1 ——1 00 .LL—…….—l To briefly review the last few years, the NASDAQ Industrials has moved from 177.70 at the August 1982 low to a high of 408.40 in June 1983, a 129.83 advance as opposed to a 65.68 com- parable rise in the DJIA. The OTC Average then corrected itself 38.76 in July 1984 verses a correction over a similiar time period of 15.59 in the Dow. Although very dramatic, both of these moves in the aTC Index are not surprising, as we know a characteristic of the aTC Average is its historical tendency to rise and fall more sharply than the Dow, i.e. a higher beta. A glance at the chart above will show that this has been true in most major swings. However much of the superior relative action of the OTC stocks stem from their behavior bewteen 1976 and 1980, which constituted an exception to this rule. During that time OTC issues moved moderately upward during a downward and then flat market in the DJIA. Since then until the July 1984 low the action has been normal. However, recent strength in the OTC market relative to the Dow has been poor. True, the aTC Index has risen 43.41 from the July 1984 low, but this compares with a 57.75 increase in the DJIA. The OTC Index is still trading 12.22 below its June 1983 high While the DJIA continues to flirt with new highs, over 400 points above its November 1983 pre- vious high. .. As we had superior relative performance in the 1976-1980 period in the OTC sector, while the DJIA was moving down, since July 1984 we are seeing the OTC /DJIA ratio under-perform as the DJIA continues to move up. Monitoring this ratio may give us a clue to the ability of the general market to sustain its upward movement. Dow-Jones Industrials (12 00 p. m.) 1691. 68 S & P Composite (1200 p.m.) 225.67 Cumulative Index (3/6/86) 2955.56 ROBERT J. SIMPKINS, JR. DELAFIELD, HARVEY, TAB ELL INC. No statement or epresslon of oPinion or any other matter herem contamed Is, ()( IS to be deemed to be, directly or Indirectly an offer Of the sollcrtatlon of an offer to buyor sell any security referred toor mentioned The matter IS presented merely for tM convemenco 01 the subSCriber While we believe the sources of our Inlormatlon to be reliable, we In no way represent or guarantee the accuracy thoreo! nor of Ihe slalomenls made herem Any action to be laken bylhe SubSCflbor should be based on hiS own mvesllgatlon and mlormatlon DelafJeld, Harvey, Tabell Inc, as a corporation and Its officers or employees may now have, or may laler talle poSitions or trades In respect to any seCUrities mentioned In thfs or any future Issue, and such pOSItion may be dlHerent from any vlev's nowor hereafter epf(lssed In thiS or any other Issue Delafield Harvey Tabelf Inc …. hlch IS registered With the SEC as an Investment adVisor, may give adVice tOltS mvestment adVISor, and other customers mdependcnlly of anv statemenls made In this or In any other Issue Further mformatlon on any security mentioned herem Is available on request