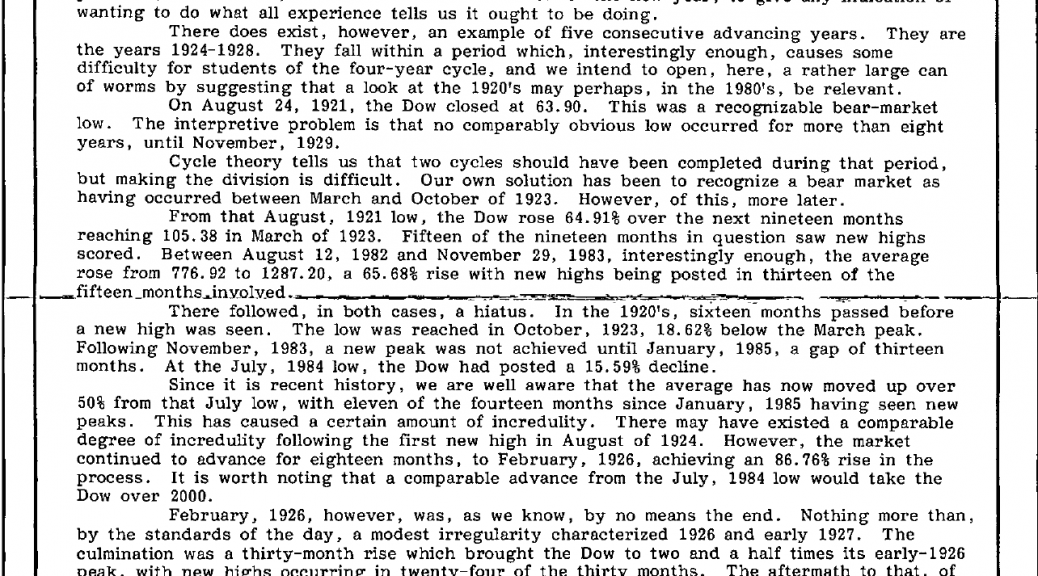 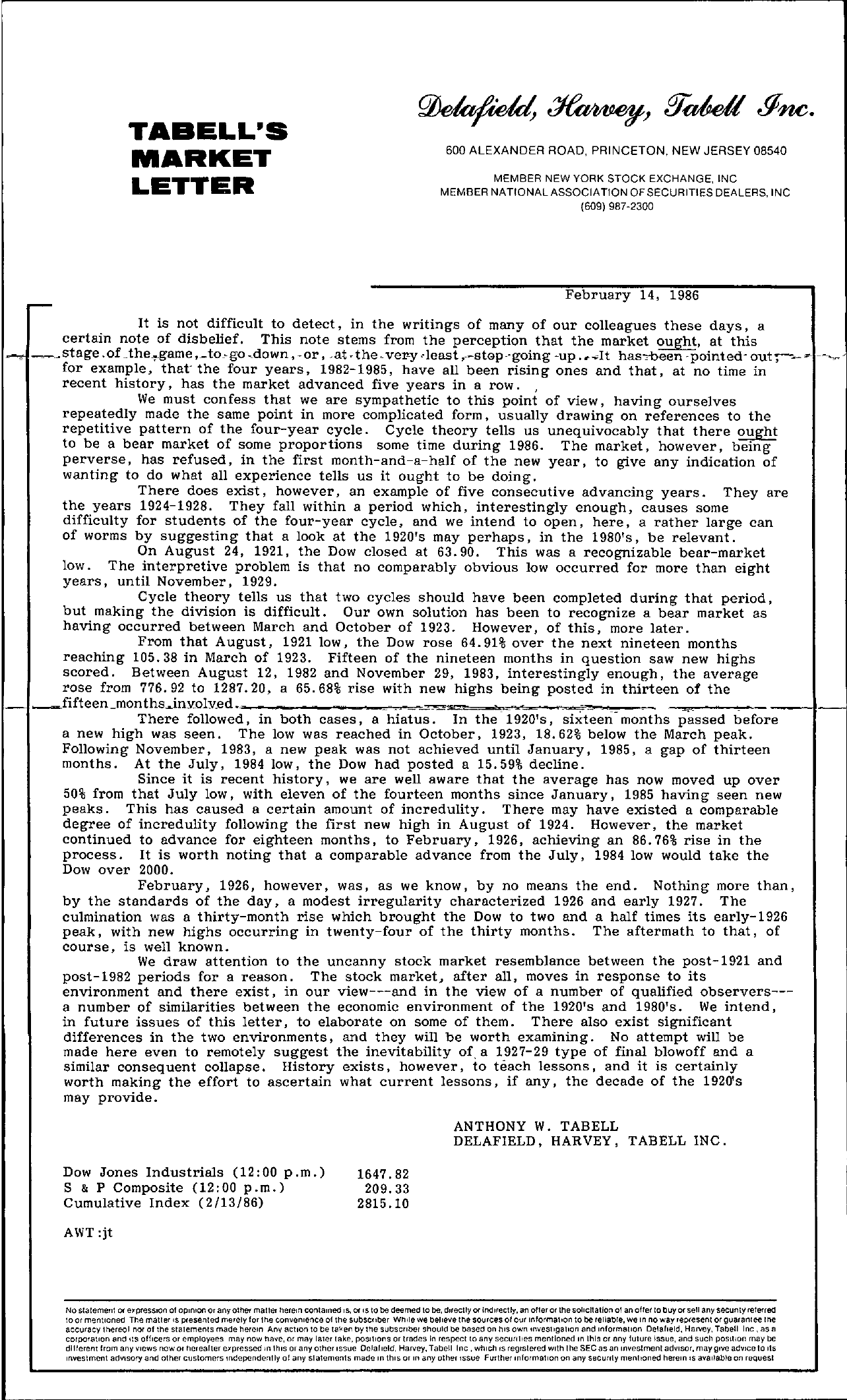 TABELL'S MARKET LETTER 600 ALEXANDER ROAD, PRINCETON, NEW JERSEY 08540 MEMBER NEW YORK STOCK EXCHANGE, INC MEMBER NATIONAL ASSOCIATION OF SECURITIES DEALERS,INC (609) 987-2300 February 14, 1986 It is not difficult to detect, in the writings of many of our colleagues these days, a certain note of disbelief. This note stems from the perception that the market ought, at this 1-,. stage .of the.,.game,to.go ,down, -or, .atthe.vel'-y least ,–stop–going -up . It haso-been -pointed- outr– – . for example, that- the four years, 1982-1985, have all been rising ones and that, at no time in recent history, has the market advanced five years in a row. , We must confess that we are sympathetic to this point of view, having ourselves repeatedly made the same point in more complicated form, usually drawing on references to the repetitive pattern of the four-year cycle. Cycle theory tells us unequivocably that there ought to be a bear market of some proportions some time during 1986. The market, however, being perverse, has refused, in the first month-and-a-half of the new year, to give any indication of wanting to do what all experience tells us it ought to be doing. There does exist, however, an example of five consecutive advancing years. They are the years 1924-1928. They fall within a period which, interestingly enough, causes some difficulty for students of the four-year cycle, and we intend to open, here, a rather large can of worms by suggesting that a look at the 1920's may perhaps, in the 1980's, be relevant. On August 24, 1921, the Dow closed at 63.90. This was a recognizable bear-market low. The interpretive problem is that no comparably obvious low occurred for more than eight years, until November, 1929. Cycle theory tells us that two cycles should have been completed during that period, but making the division is difficult. Our own solution has been to recognize a bear market as having occurred between March and October of 1923. However, of this, more later. From that August, 1921 low, the Dow rose 64.91 over the next nineteen months reaching 105.38 in March of 1923. Fifteen of the nineteen months in question saw new highs scored. Between August 12, 1982 and November 29, 1983, interestingly enough, the average rose from 776.92 to 1287.20, a 65.68 rise with new highs being posted in thirteen of the 1 fifteenmonthsiny.olyed. '- There followed, in both cases, a hiatus. In the -1920's, sixteen-months passed before a new high was seen. The low was reached in October, 1923, 18.62 below the March peak. Following November, 1983, a new peak was not achieved until January, 1985, a gap of thirteen months. At the July, 1984 low, the Dow had posted a 15.59 decline. Since it is recent history, we are well aware that the average has now moved up over 50 from that July low, with eleven of the fourteen months since January, 1985 having seen new peaks. This has caused a certain amount of incredulity. There may have existed a comparable degree of incredulity following the first new high in August of 1924. However, the market continued to advance for eighteen months, to February, 1926, achieving an 86.76 rise in the process. It is worth noting that a comparable advance from the July, 1984 low would take the Dow over 2000. February, 1926, however, was, as we know, by no means the end. Nothing more than, by the standards of the day, a modest irregularity characterized 1926 and early 1927. The culmination was a thirty-month rise which brought the Dow to two and a half times its early-1926 peak, with new highs occurring in twenty-four of the thirty months. The aftermath to that, of course, is well known. We draw attention to the uncanny stock market resemblance between the post-1921 and post-1982 periods for a reason. The stock market, after all, moves in response to its environment and there exist, in our view—and in the view of a number of qualified observers— a number of similarities between the economic environment of the 1920's and 1980's. We intend, in future issues of this letter, to elaborate on some of them. There also exist significant differences in the two environments, and they will be worth examining. No attempt will be made here even to remotely suggest the inevitability of, a 1927-29 type of final blowoff and a similar consequent collapse. History exists, however, to teach lessons, and it is certainly worth making the effort to ascertain what current lessons, if any, the decade of the 1920's may provide. ANTHONY W. TABELL DELAFIELD, HARVEY, TAB ELL lNC. Dow Jones Industrials (1200 p.m.) S & P Composite (12 00 p.m.) Cumulative Index (2/13/86) 1647.82 209.33 2815.10 AWT it NO s!alemem or erpresslon of Opinion or any other matter herem contamed IS, or IS 10 be deemed 10 be, dlrectty or Indirectly. an offer Of Ihesohcltatlon of an cfter \0 buy or sell any secunly referred toor mentioned The matter IS presented merely for lhe convenience 01 the subsCriber While we believe the sources of our Intormallon to be reliable, we In noway represent or guarantee the accuracy thereal nor of the statements made herein Anv action to be talen by the subSCriber shoutd be based on his own investigation and Information Delafield, Harvey, Tabell Inc, as a corporation and Its officers or employees may now have, or may later take, POSitions or trades In respect to any secufllies mentioned In this or any lulure Issue, and such POSition may be dl1!erem from any views nowOl hereafter epressed In thiS or any other Issue Delafield, Harvey, Tabell Inc, which IS registered With the SECas an InYestment adVisor, may give adYlceto ItS rnvestment adYlsory and other customers mdependently 01 any statements made m thiS or In any other Issue Furthellnformatlon on any seculliy mentioned herein IS available on reQuest