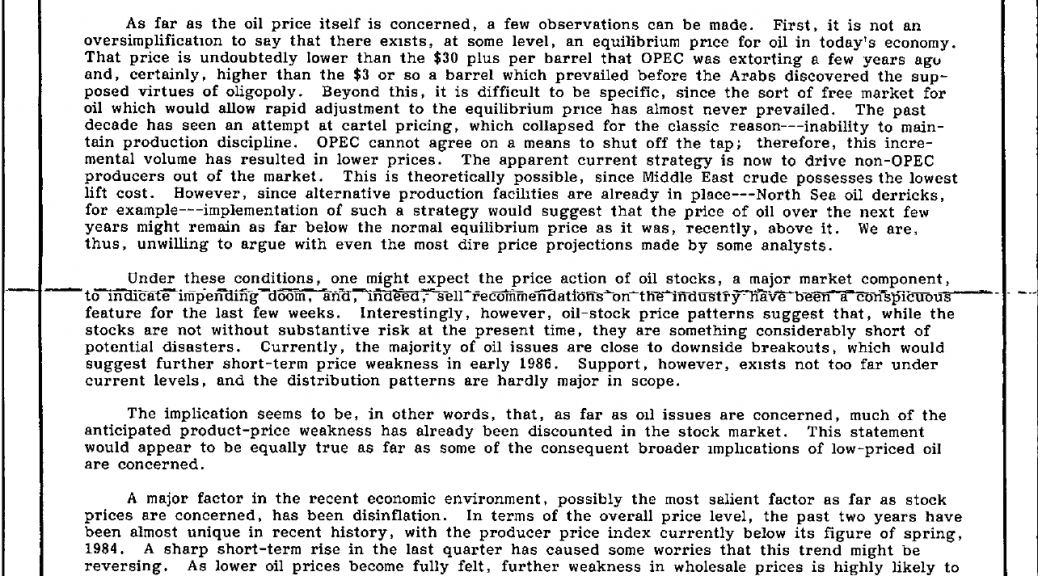 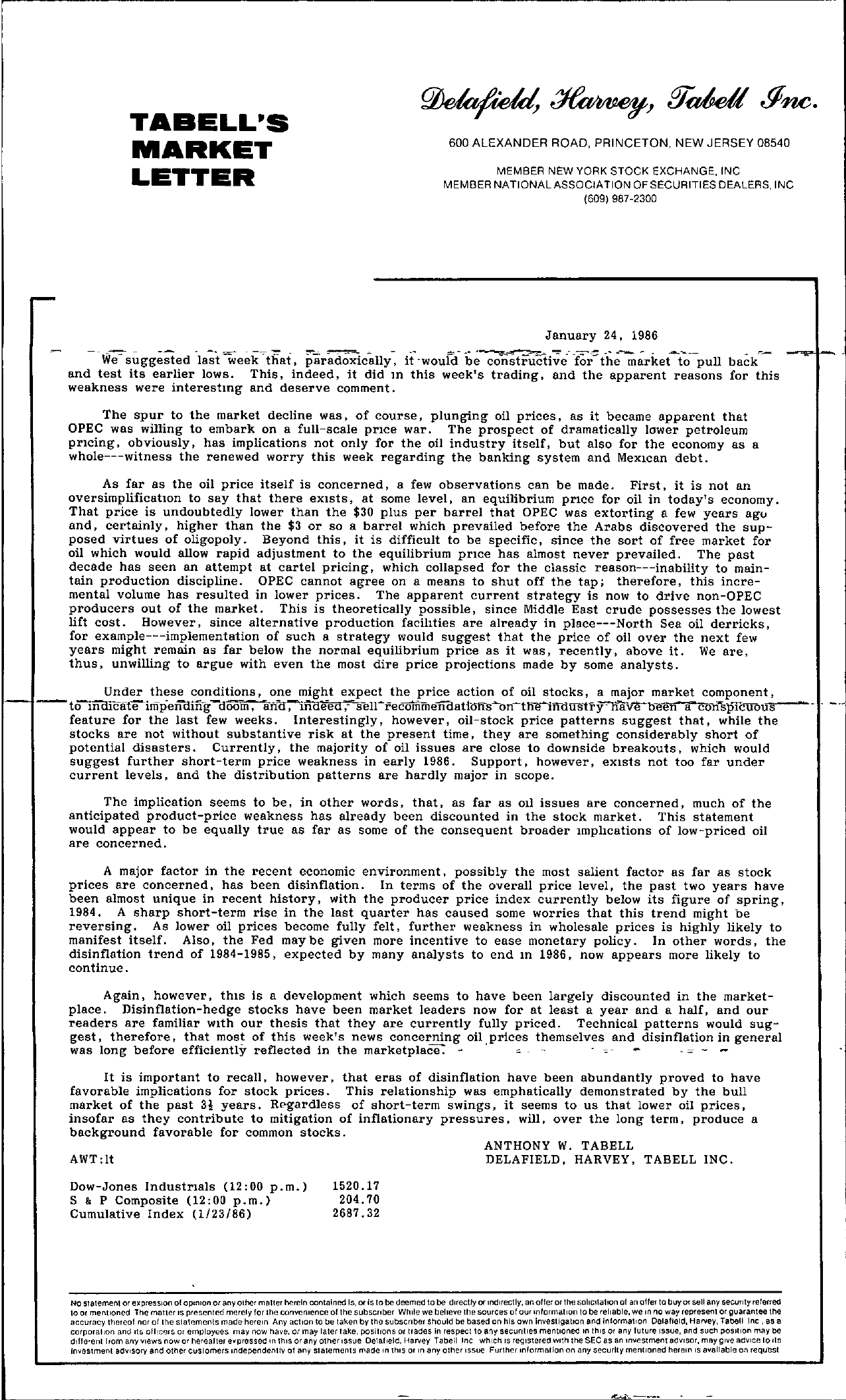 TABELL'S MARKET LETTER 600 ALEXANDER ROAD, PRINCETON, NEW JERSEY 08540 MEMBER NEW YORK STOCK EXCHANGE, INC MEMBER NATIONAL ASSOCIATION OF SECURITIES DEALERS, INC (609) 987-2300 1- – January 24, 1986 –. L…– —;;-' r . We suggested last week that, paradoxically, it -would be constructive for the market to pull back and test its earlier lows. This. indeed, it did In this week's trading. and the apparent reasons for this weakness were interesting and deserve comment. The spur to the market decline was, of course. plunging oil prices, as it became apparent that OPEC was willing to embark on a full-scale prIce war. The prospect of dramatically lower petroleum prtcing. obviously, has implications not only for the oil industry itself, but also for the economy as a whole—witness the renewed worry this week regarding the banking system and Mexlcan debt. As far as the oil price itself is concerned, a few observations can be made. First, it is not an oversimplificatIon to say that there eXlsts, at some level, an equilibrium prIce for oil in today's economy. That price is undoubtedly lower than the 30 plus per barrel that OPEC was extorting a few years agu and, certainly, higher than the 3 or so a barrel which prevailed before the Arabs discovered the supposed virtues of oligopoly. Beyond this. it is difficult to be specific, since the sort of free market for oil which would allow rapid adjustment to the equilibrium prlce has almost never prevailed. The past decade has seen an attempt at cartel pricing. which collapsed for the classic reason—inability to maintain production discipline. OPEC cannot agree on a means to shut off the tap; therefore. this incremental volume has resulted in lower prices. The apparent current strategy is now to drive non-OPEC producers out of the market. This is theoretically possible. since Middle East crude possesses the lowest lift cost. However. since alternative production facilIties are already in place—North Sea oil derricks, for example—implementation of such a strategy would suggest that the price of oil over the next few years might remain as far below the normal equilibrium price as it was. recently, above it. We are. thus. unwilling to argue with even the most dire price projections made by some analysts. Under these conditions, one might expect the price action of oil stocks, a major market component, tofildicateirftlendffi-g—doom I afi'd7'inae-ed ,- sell-recomme11clatioffs-'-onthe—ifrdustr-.rnaVe been a conspicuou'''sr-feature for the last few weeks. Interestingly. however. oil-stock price patterns suggest that. while the stocks are not without substantive risk at the present time. they are something considerably short of potential disasters. Currently, the majority of oil issues are close to downside breakouts. which would suggest further short-term price weakness in early 1986. Support. however. eXlsts not too far under current levels, and the distribution patterns are hardly major in scope. The implication seems to be, in other words, that, as far as Oll issues are concerned I much of the anticipated product-price weakness has already been discounted in the stock market. This statement would appear to be equally true as far as some of the consequent broader lmplIcations of low-priced oil are concerned. A major factor in the recent economic environment, possibly the most salient factor as far as stock prices are concerned, has been disinflation. In terms of the overall price level, the past two years have been almost unique in recent history, with the producer price index currently below its figure of spring. 1984. A sharp short-term rise in the last quarter has caused some worries that this trend might be reversing. As lower oil prices become fully felt. further weakness in wholesale prices is highly likely to manifest itself. Also, the Fed may be given more incentive to ease monetary policy. In other words. the disinflation trend of 1984-1985, expected by many analysts to end 10 1986, now appears more likely to continue. Again I however. thls is a development which seems to have been largely discounted in the market- place. Disinflation-hedge stocks have been market leaders now for at least a year and a half, and our readers are familiar wlth our thesis that they are currently fully priced. TeChnical patterns would sug- gest. therefore, that most of this week's news concerning oil prices themselves and disinflation in general was long before efficiently reflected in the marketplace- , . – – – – – – – – – – It is important to recall, however, that eras of disinflation have been abundantly proved to have favorable implications for stock prices. This relationship was emphatically demonstrated by the bull market of the past 3! years. REgardless of short-term swings, it seems to us that lower oil prices. insofar as they contribute to mitigation of inflationary pressures, will, over the long term, produce a background favorable for common stocks. ANTHONY W. TABELL AWTlt DELAFIELD, HARVEY, TAB ELL INC. Dow-Jones Industrlals (12 00 p.m.) S & P Composite (1200 p.m.) Cumulative Index (1/23/86) 1520.17 204.70 2687.32 NO statement or epress!on 0\ opInion or any Olher matter herein contained Is, or IS \0 be deemed to be dlrecllyor md!rectly, an ofler or the sohc!la\lon of an oller to buyor sell any secuflly relerred 10 or mentIoned The malter !s presenled merely for the convenIence of the subSCriber Wh!le we bel!eve the sources of our IOformal!on to be rehable, we 10 no way represent or guarantee the accuracy thereof nor of Ihe statements made herem Any action to be taken by tho subscriber should be based on his own Invesllgatlon and Information Delafield, Harvey, Tabell Inc, as a corporalion and ItS ofllCfOlrs or employees may now have, or may later take, poslt!ons or trades In respect to any secunt!es mentioned m this or any future Issue, and such pOSition may be dtlfeent from anyv!ews now or herealter ewpressod In thiS or any other Issue Delafield, Harvey Tabel! Inc whlch!s registered With the SEC as an Investment adVisor, may give advice tOlts Investment adVISOry and other cuslomers Independent!v of any statements made In thiS or In any other Issue Further Informat!onon any security mentioned herein IS available on reQuest