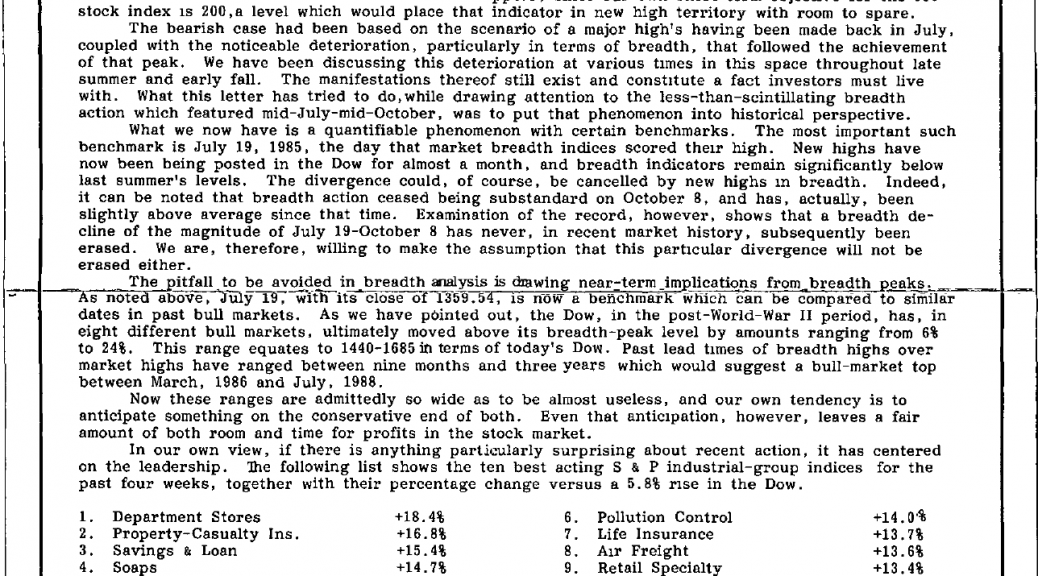 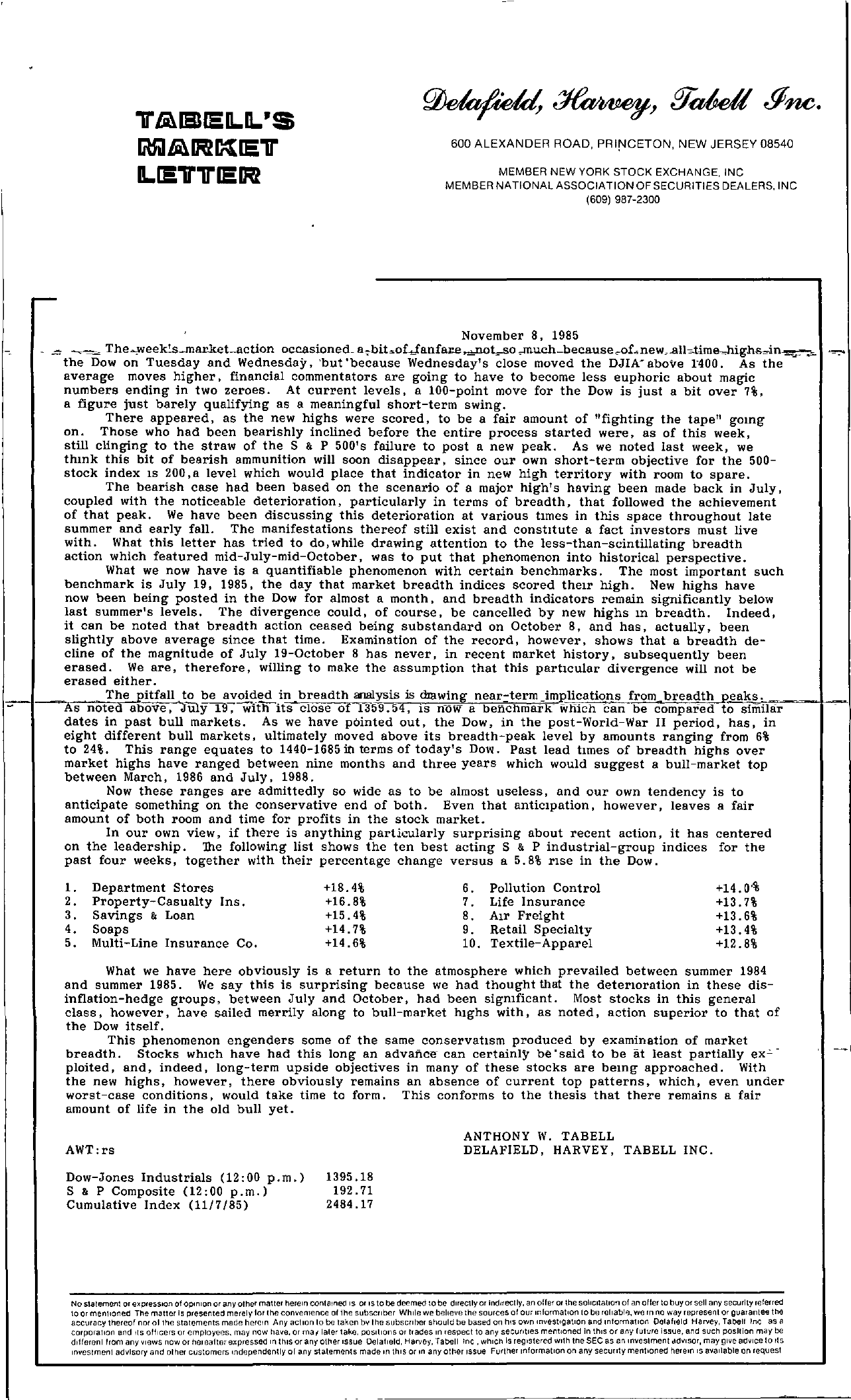 DLinIBUEIL.IL.' S IiijiJ Lin IRl IED 1L.1EDD1E1Rl 600 ALEXANDER ROAD. PR If'lCETON, NEW JERSEY 08540 MEMBER NEW YORK STOCK EXCHANGE. INC MEMBER NATIONAL ASSOCIATION OF SECURITIES DEALERS. INC (609) 987-2300 November 8, 1985 ..'; —, The……,week!smar..ket8ction occasioned 8bit,of4anfar.et-so uchbecause-e-of..,new.aUt-ime-,Jrighs,in. the Dow on Tuesday and Wednesday, 'but 'because Wednesday's close moved the DJIA' above 1'400. As the average moves higher I financial commentators are going to have to become less euphoric about magic numbers ending in two zeroes. At current levels. a lOO-point move for the Dow is just a bit over 7, a figure just barely qualifying as a meaningful short-term swing. There appeared. as the new highs were scored, to be a fair amount of fighting the tapel! gOlng on. Those who had been bearishly inclined before the entire process started were, as of this week, still clinging to the straw of the S & P 500's failure to post a new peak. As we noted last week, we thInk this bit of bearish ammunition will soon disappear, since our own short-term objective for the 500- stock index IS 200, a level which would place that indicator in new high territory with room to spare. The bearish case had been based on the scenario of a major high's having been made back in July, coupled with the noticeable deterioration. particularly in terms of breadth. that followed the achievement of that peak. We have been discussing this deterioration at various times in this space throughout late summer and early fall. The manifestations thereof still exist and constitute a fact investors must live with. What this letter has tried to do, while drawing attention to the less-than-scintillating breadth action which featured mid-July-mid-October. was to put that phenomenon into historical perspective. What we now have is a quantifiable phenomenon with certain benchmarks. The most important such benchmark is July 19, 1985, the day that market breadth indices scored theIr high. New highs have now been being posted in the Dow for almost a month, and breadth indicators remain significantly below last summer's levels. The divergence could, of course, be cancelled by new highs In breadth. Indeed, it can be noted that breadth action ceased being substandard on October 8, and has, actually, been slightly above average since that time. Examination of the record, however, shows that a breadth de- cline of the magnitude of July 19-0ctober 8 has never. in recent market history, subsequently been erased. We are. therefore, willing to make the assumption that this partIcular divergence will not be erased either. 1 The pitfall to be oiin breadth analysis is dnlwing near-termjmplications from breadth pe,aks'.', -lf-I … s noted above, Jiilfl9, wIth Its close of 1359.54. IS noW a benchmark wHlCh can be compared to sImIlar dates in past bull markets. As we have p6inted out, the Dow, in the post-World-War II period. has, in eight different bull markets, ultimately moved above its breadth-peak level by amounts ranging from 6 to 24. This range equates to 1440-1685itl terms of today's Dow. Past lead hmes of breadth highs over market highs have ranged between nine months and three years which would suggest a bull-market top between March, 1986 and July, 1988. Now these ranges are admittedly so wide as to be almost useless, and our own tendency is to anticipate something on the conservative end of both. Even that anticIpation. however. leaves a fair amount of both room and time for profits in the stock market. In our own view. if there is anything particularly surprising about recent action. it has centered on the leadership. The following list shows the ten best acting S & P industrial-group indices for the past four weeks, together with their percentage change versus a 5.8 rIse in the Dow. l. Department Stores 2. Property-Casualty Ins. 3. Savings & Loan 4. Soaps 5. Multi-Line Insurance Co. 18.4 16.8 15.4 14.7 14.6 6. Pollution Control 7. Life Insurance 8. AIr Freight 9. Retail Specialty 10. Textile-Apparel 14.0' 13.7 13.6 13.4 12.8 What we have here obviously is a return to the atmosphere which prevailed between summer 1984 and summer 1985. We say this is surprising because we had thought that the deterIoration in these dis- inflation-hedge groups. between July and October, had been signIficant. Most stocks in this general class. however, have sailed merrily along to bull-market hIghs with, as noted, action superior to that of the Dow itself. This phenomenon engenders some of the same conservatIsm produced by examination of market breadth. Stocks WhICh have had this long an advafice- can certainly be' said to be at least partially ex' plaited, and, indeed, long-term upside objectives in many of these stocks are beIng approached. With the new highs, however. there obviously remains an absence of current top patterns. which, even under worst-case conditions, would take time to form. This conforms to the thesis that there remains a fair amount of life in the old bull yet. AWTrs ANTHONY W. TAB ELL DELAFIELD, HARVEY, TABELL INC. Dow-Jones Industrials (12 00 p. m.) S & P Composite (12 00 p.m.) Cumulative Index (11/7185) 1395.18 192.71 2484.17 No statemont or expreSSion of opinion or any other matter herein contained IS or IS to be deemed to be dlrectty or Indirectly, an offer or the soliCitation of an offer to buy or sell any security referred to or mentioned The matter is presented merely tor the convenience of the subSCriber While webellevethe sources of our Information to be rellabl'l, we In no way represent or guarantee the accuracy thereof norot the statements made herein Any action to be taken bv the subscrlher Should be based on hiS own investigation and Information Delafield Harvey, Tabell Inc as a corporation and Its oilicers or employees, may now have, or ma( later take, POSitions or trades In respect to any seCUrities mentioned In thiS or any future Issue, and such position may be dlfferenl from any views now or heleafterexpressed In thiS or any other Issue Delafield, Harvey, labell Inc, which Is registered with the SEC as an mvestment ddvlsor, may give advice to ItS Investment advisory and other customers Independently of any statements made In thiS or In any other Issue Furlher mforma\lon on any security mentioned herein IS available on reQuest