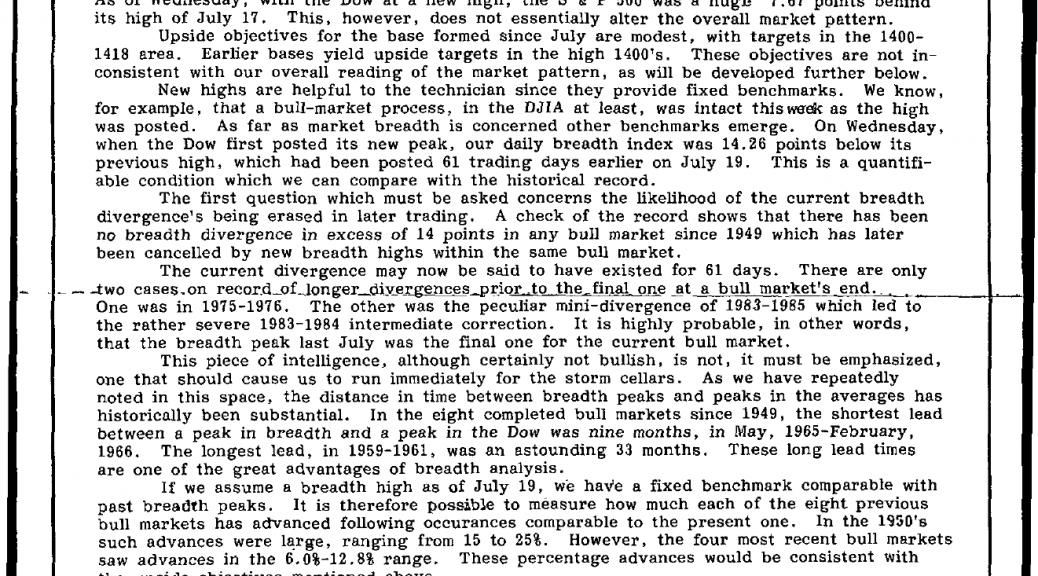 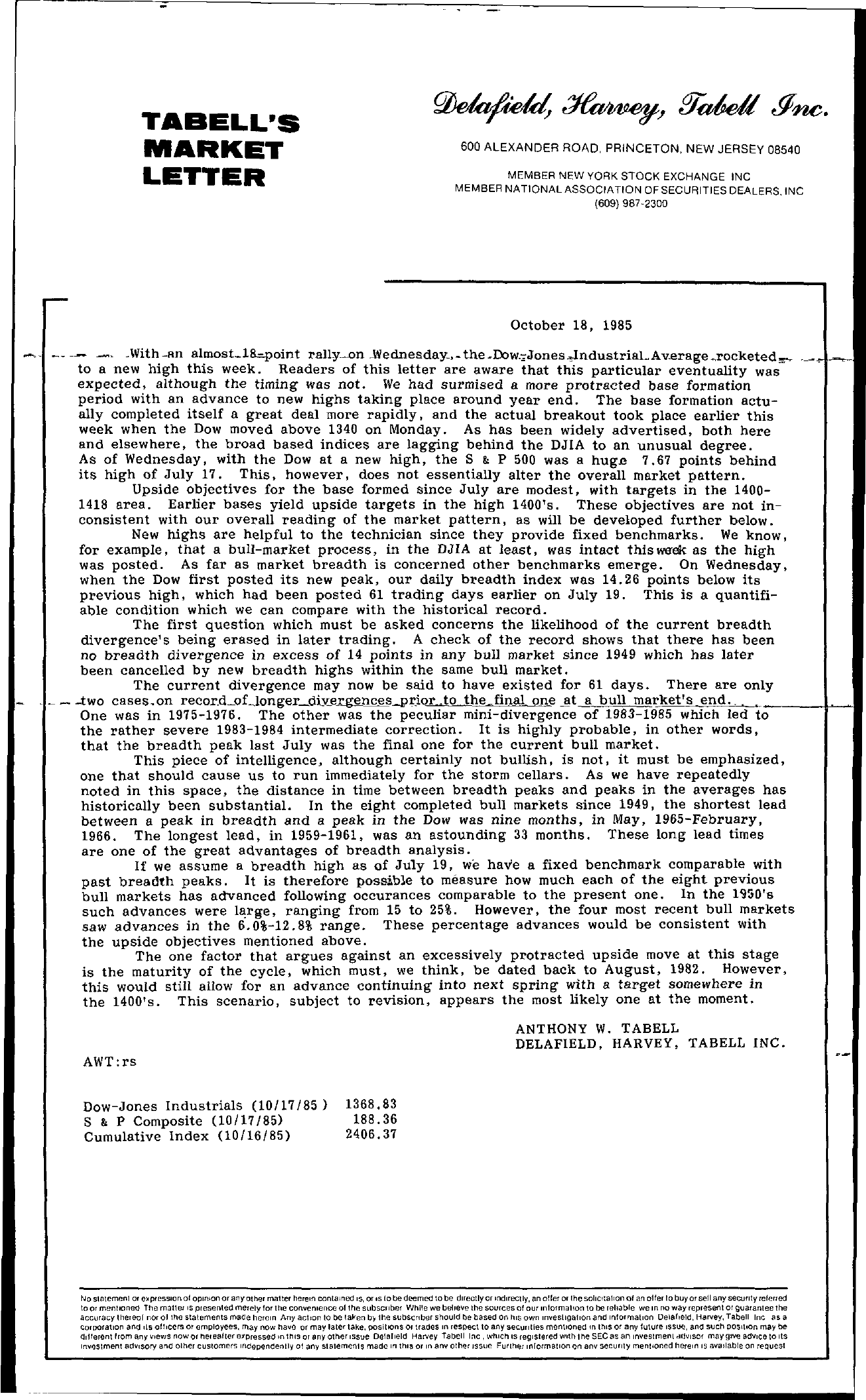 – TABELL'S MARKET LETTER 600 ALEXANDER ROAD, PRINCETON, NEW JERSEY 08540 MEMBER NEW YORK STOCK EXCHANGE INC MEMBER NATIONAL ASSOCIATION OF SECURITIES DEALERS, INC (609) 987-2300 October 18, 1985 – – ..- — With -Rn almosL18point rally-n .Wednesday, the DowJonesIndustriaLAv-erage.rocketed.. to a new high this week Readers of this letter are aware that this particular eventuality was expected, although the timing was not. We had surmised a more protracted base formation period with an advance to new highs taking place around year end. The base formation actu- ally completed itself a great deal more rapidly, and the actual breakout took place earlier this week when the Dow moved above 1340 on Monday. As has been widely advertised, both here and elsewhere, the broad based indices are lagging behind the DJIA to an unusual degree. As of Wednesday, with the Dow at a new high, the S & P 500 was a hug.., 7.67 points behind its high of July 17. This, however, does not essentially alter the overall market pattern. Upside objectives for the base formed since July are modest, with targets in the 1400- 1418 area. Earlier bases yield upside targets in the high 1400's. These objectives are not in- consistent with our overall reading of the market pattern, as will be developed further below. New highs are helpful to the technician since they provide fixed benchmarks. We know, for example, that a bull-market process, in the DJIA at least, was intact this Elk as the high was posted. As far as market breadth is concerned other benchmarks emerge. On Wednesday, when the Dow first posted its new peak, our daily breadth index was 14.26 points below its previous high, which had been posted 61 trading days earlier on July 19. This is a quantifi- able condition which we can compare with the historical record. The first question which must be asked concerns the likelihood of the current breadth divergence's being erased in later trading. A check of the record shows that there has been no breadth divergence in excess of 14 points in any bull market since 1949 which has later been cancelled by new breadth highs within the same bull market. The current divergence may now be said to have existed for 61 days. There are only two caseson recordoLJongerd;x.eJ.'gences….pr,ior to the final one at a bull end One was in 1975-1976. The other was the peculiar mini-divergence of 19R–19R5 which led to the rather severe 1983-1984 intermediate correction. It is highly probable, in other words, that the breadth peak last July was the final one for the current bull market. This piece of intelligence, although certainly not bullish, is not, it must be emphasized, one that should cause uS to run immediately for the storm cellars. As we have repeatedly noted in this space, the distance in time between breadth peaks and peaks in the averages has historically been substantial. In the eight completed bull markets since 1949, the shortest lead between a peak in breadth and a peak in the Dow was nine months, in May, 1965-February, 1966. The longest lead, in 1959-1961, was an astounding 33 months. These long lead times are one of the great advantages of breadth analysis. If we aSSume a breadth high as of July 19, we have a fixed benchmark comparable with past breadth peaks. It is therefore possi.ble to measure how much each of the eight previous bull markets has advanced following occurances comparable to the present one. In the 1950's such advances were large, ranging from 15 to 25. However, the four most recent bull markets saw advances in the 6.0-12.8 range. These percentage advances would be consistent with the upside objectives mentioned above. The one factor that argues against an excessively protracted upside move at this stage is the maturity of the cycle, which must, we think, be dated back to August, 1982. However, this would still allow for an advance continuing into next spring with a target somewhere in the 1400's. This scenario, subject to revision, appears the most likely one at the moment. AWTrs ANTHONY W. TABELL DELAFIELD, HARVEY, TAB ELL INC. Dow-Jones Industrials (10/17/85) 1368,83 S & P Composite (10/17/85) 188.36 Cumulative Index (10/16/85) 2406.37 No statement or epresslon 01 OPinion or any other matter herem contained IS, or IS to be deemed to be directly or indirectly. an oHer or the sollcltallon of an oHer 10 buy or sell any security referred 1001 mentIOned The matter IS presented merely lor the convenience 01 the subSCliber While we bellell'e the sources of our intO/mahan to be rehable we In no way represent or guarantee the accuracy thereof norolthe statements made herein Any aellon to be lalen b the subSCriber should be based On hiS own investigation and information Delafield, Harvey. Tabell Inc as a corporation and lIs oUlcers 01 employees, may now have or may laler take. positIOns 01 trades In respect to any seCUrities men\toned In thiS Of any future ISSue, and such POlhon may be different Irom any views now or hereafter e1pressedm thiS or any other Issue Delaflefd Harvey labetl Inc, which IS registered With Ihe SEC as an Investment d(jvlsor maygrve adVice to lIs Investment adVISOry and other customers Independently 01 any statemenls made 111 thiS or In anv other Issue Further mformatlon on anv securrly men\!oned herein IS available on leQuest