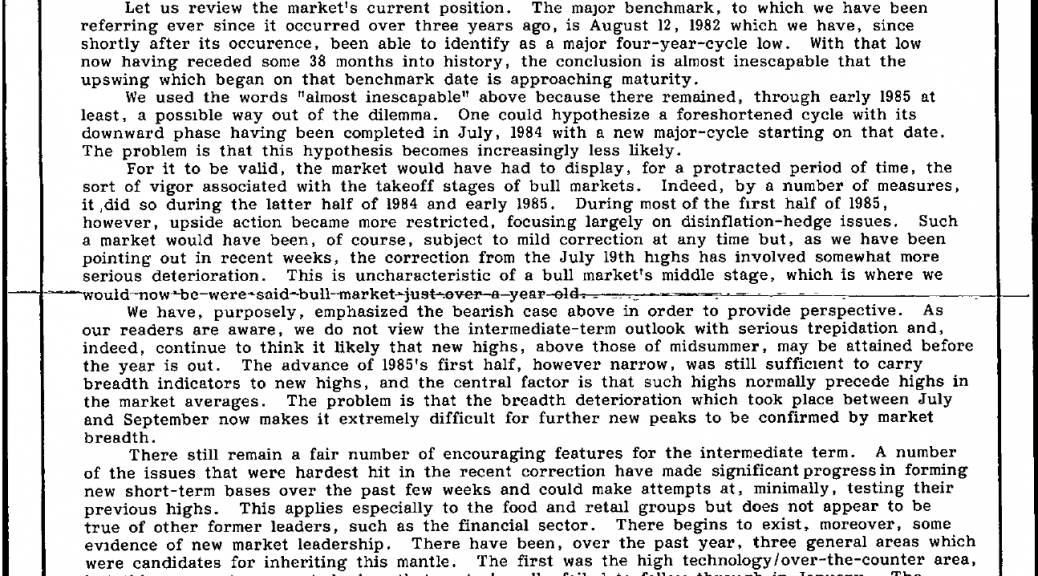 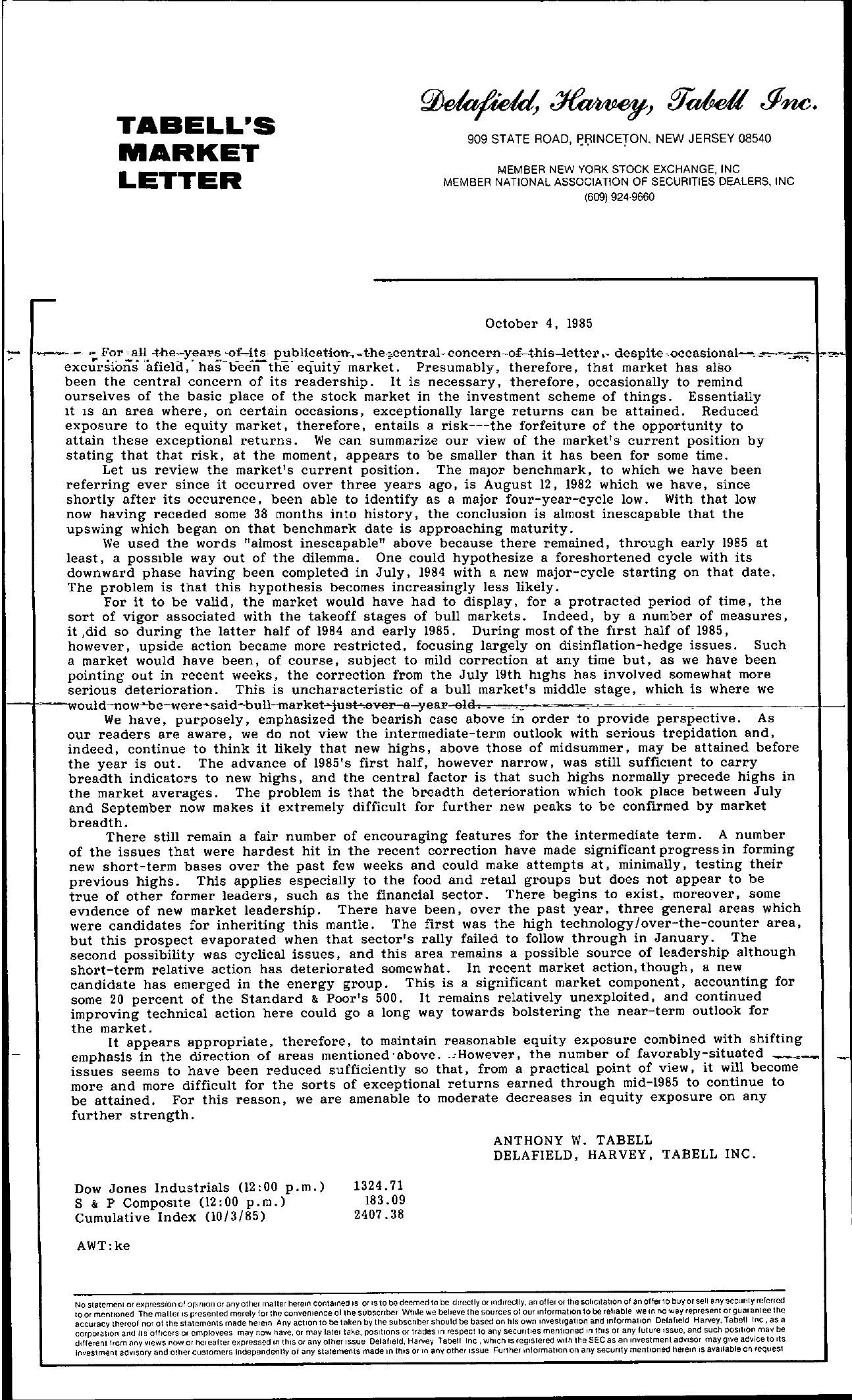 TABELL'S MARKET LETTER 909 STATE ROAD, I3INCETON. NEW JERSEY 08540 MEMBER NEW YORK STOCK EXCHANGE, INC MEMBER NATIONAL ASSOCIATION OF SECURITIES DEALERS. INC (609) 924-9660 October 4, 1985 -, —— ';. ;.r …Bl. -theyapf!.o!,!! plia.in–. -the!entral concern-of-this-Iet-tep,- despite occasional–. -… excurSIOns afIeld, has been the eqUIty market. Presumably. therefore. that market has also been the central concern of its readership. It is necessary, therefore, occasionally to remind ourselves of the basic place of the stock market in the investment scheme of things. Essentially It IS an area where, on certain occasions, exceptionally large returns can be attained. Reduced exposure to the equity market, therefore, entails a risk—the forfeiture of the opportunity to attain these exceptional returns. We can summarize our view of the market's current position by stating that that risk, at the moment. appears to be smaller than it has been for some time. Let us review the market's current position. The major benchmark, to which we have been referring ever since it occurred over three years ago, is August 12, 1982 which we have, since shortly after its occurence, been able to identify as a major four-year-cycle low. With that low now having receded some 38 months into history, the conclusion is almost inescapable that the upswing which began on that benchmark date is approaching maturity. We used the words almost inescapable above because there remained, through early 1985 at least, a pOSSIble way out of the dilemma. One could hypothesize a foreshortened cycle with its downward phase having been completed in July, 1984 with a new major-cycle starting on that date. The problem is that this hypothesis becomes increasingly less likely. For it to be valid, the market would have had to display, for a protracted period of time, the sort of vigor associated with the takeoff stages of bull markets. Indeed, by a number of measures, it ,did so during the latter half of 1984 and early 1985. During most of the fIrst half of 1985, however, upside action became more restricted, focusing largely on disinflation-hedge issues. Such a market would have been, of course, subject to mild correction at any time but, as we have been pointing out in recent weeks, the correction from the July 19th hIghs has involved somewhat more serious deterioration. This is uncharacteristic of a bull market's middle stage, which is where we 1 – -would-nowbc-were-said-bull-marketjusver-a-yeal'-el. – We have, purposely, emphasized the bearish case above in order to provide perspective. As our readers are aware, we do not view the intermediate-term outlook with serious trepidation and, indeed, continue to think it likely that new highs, above those of midsummer, may be attained before the year is out. The advance of 1985's first half, however narrow, was still sufficIent to carry breadth indicators to new highs, and the central factor is that such highs normally precede highs in the market averages. The problem is that the breadth deterioration which took place between July and September now makes it extremely difficult for further new peaks to be confirmed by market breadth. There still remain a fair number of encouraging features for the intermediate term. A number of the issues that were hardest hit in the recent correction have made significant progress in forming new short-term bases over the past few weeks and could make attempts at, minimally, testing their previous highs. This applies especially to the food and retrul groups but does not appear to be true of other former leaders, such as the financial sector. There begins to exist, moreover, some eVIdence of new market leadership. There have been, over the past year, three general areas which were candidates for inheriting this mantle. The first was the high technology/over-the-counter area, but this prospect evaporated when that sector's rally failed to follow through in January. The second possibility was cyclical issues, and this area remains a possible source of leadership although short-term relative action has deteriorated somewhat. In recent market action, though, a new candidate has emerged in the energy group. This is a significant market component, accounting for some 20 percent of the Standard & Poor's 500. It remains relatively unexploited, and continued improving technical action here could go a long way towards bolstering the near-term outlook for the market. It appears appropriate, therefore, to maintain reasonable equity exposure combined with shifting emphasis in the direction of areas mentioned' above … However, the number of favorably-situated issues seems to have been reduced sufficiently so that, from a practical point of view, it will become more and more difficult for the sorts of exceptional returns earned through mid-1985 to continue to be attained. For this reason, we are amenable to moderate decreases in equity exposure on any further strength. ANTHONY W. TABELL DELAFIELD, HARVEY, TABELL INC. Dow Jones Industrials (12 00 p. m. ) S & P CompOSIte (1200 p.m.) Cumulative Index (10/3/85) AWTke 1324.71 183.09 2407.38 No statemenl or expression 01 OPinion or any other mailer herein contamed IS or IS to bo deemed 10 be directly or indirectly, an oHer or lhe soliCitation of an offer 10 buyor sell any secunty referred tOOl mentioned The matter IS presenled merely forthe conltenlenceof thesubscnbe, While we beheve the sources Of our Information 10 be lellable we In noway represent or guaranteelhe accuracy thereof nOI 01 the statements made herem Any action to be taken by lhe subSCriber should be based on hfs own mltesllgallon and information Defafleld Harvey, Tabell Inc, as a corporation and liS officers or emplovees may now have, or may laler take, POSitions or trades In respeclto any securities mentIOned In thiS or any future Issue, and such POSition mav be dillerenilrom any Ylews now or hCleafter expressed In thiS or any other Issue Delafield, Harvey Tabell Inc, whiCh IS registered With the SEC as an Inyestment adYlsor maygllte adyiceto ItS Investment adYlsory and other customers Independently 01 any statements made In thiS or In any other Issue Further InlormatlOn on any security menlloned herem IS available on reQuest