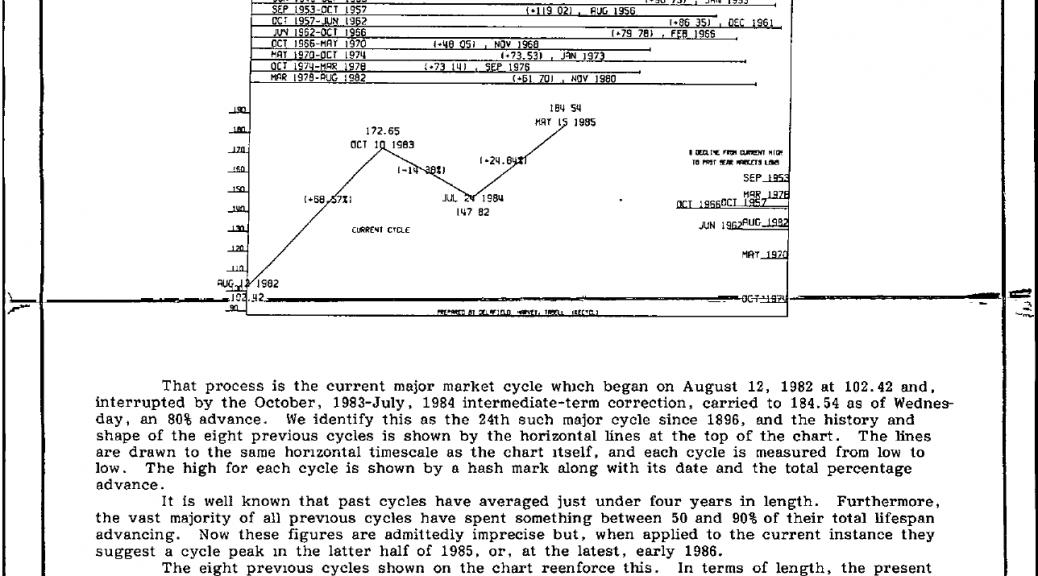 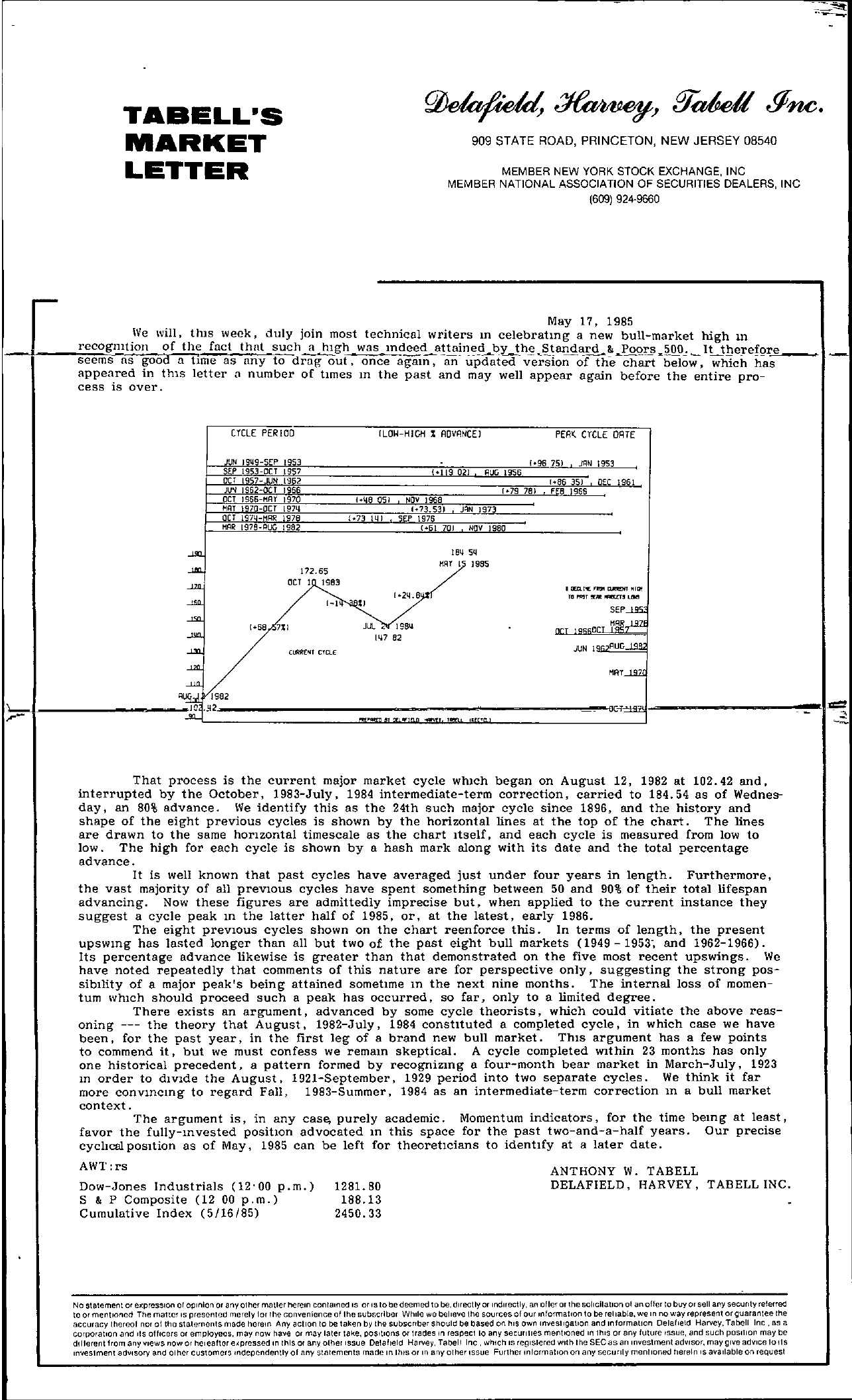 TABELL1S MARKET LETTER 909 STATE ROAD, PRINCETON, NEW JERSEY 08540 MEMBER NEW YORK STOCK EXCHANGE, INC MEMBER NATIONAL ASSOCIATION OF SECURITIES DEALERS, INC (609) 9249660 May 17, 1985 We will. thIS week, duly join most technical writers m celebratIng a new bull-market high In sreeecmo gsmatsi o noood f the fnct a tIme as that any such a hIgh to drag-out. was onc mdeed e agam attai . -ari- nue-pddabtyedt-hveeSstlaonndoa-rrdth&e-' P cL oors hart 500. It there 'belo';, which fho-ares—- appeared In thIS letter a number of tImes In the past and may well appear again before the entire pro- cess is over. CYCLE PERIOD LOW-HIGH AOVANCE) PEAt. CYCLE DATE UN JSIl9-SEP 1953 Pls-cell97 ocr I S7-JUN 19 2 JU 1962-0CT 1 5 OCT J966-f'lRY 1970 MAT 7 – CT 197 aCT 1 7 -MRR 7 HFIR 197e-RUG 1982 (.73 141 (119 021 196 75) JR 1953 RUG 1956 ..86 35) DEC 1961 (.79 7el F 56 173.5' JlN 197 P 197 (6 70J NOV 1980 172.65 OCT 1 1983 I-I (68 'I CtJ9/REIr CTCLE ( 24.8 JUl 1981.,\ 11.,\7 82 1811 54 MlH 1 1985 I 0Ea.1 IQI .-u,TIl '-Ir !VI! UII'I SEP..l.9S on ,ooo,e, .,L'lJ JUN I Qt;JRUG.JSa; MRT…1.S2l That process is the current major market cycle WhICh began on August 12, 1982 at 102.42 and. interrupted by the October, 1983-Ju1y, 1984 intermediate-term correction, carried to 184,54 as of Wednesday I an 80 advance. We identify this as the 24th such major cycle since 1896, and the history and shape of the eight previous cycles is shown by the horizontal lines at the top of the chart. The lines are drawn to the same horIzontal timescale as the chart Itself. and each cycle is measured from low to low. The high for each cycle is shown by a hash mark along with its date and the total percentage advance. It is well known that past cycles have averaged just under four years in length. Furthermore, the vast majority of all prevIous cycles have spent something between 50 and 90 of their total lifespan advancing. Now these figures are admittedly imprecise but, when applied to the current instance they suggest a cycle peak m the latter half of 1985, or, at the latest, early 1986. The eight prevIous cycles shown on the chart reenforce this. In terms of length. the present upswmg has lasted longer than all but two of the past eight bull markets (1949 -1953', and 1962-1966). Its percentage advance likewise is greater than that demonstrated on the five most recent upswings. We have noted repeatedly that comments of this nature are for perspective only, suggesting the strong possibIlity of a major peak's being attained sometIme In the next nine months. The internal loss of momentum whlch should proceed such a peak has occurred. so far, only to a limited degree. There exists an argument, advanced by some cycle theorists. which could vitiate the above reasoning — the theory that August, 1982-July, 1984 constItuted a completed cycle, in which case we have been. for the past year, in the first leg of a brand new bull market. ThIS argument has a few points to commend it, but we must confess we remaIn skeptical. A cycle completed WIthin 23 months has only one historical precedent. a pattern formed by recognizmg a four-month bear market in March-July. 1923 In order to dIVIde the August. 1921-September, 1929 period into two separate cycles. We think it far more conVlncmg to regard Fall, 1983-Summer, 1984 as an intermediate-term correction In a bull market context. The argument is, in any case, purely academic. Momentum indicators. for the time beIng at least, favor the fullY-Invested positIon advocated m this space for the past two-and-a-haIf years. Our precise cycbca1posltion as of May, 1985 can be left for theoretIcians to identIfy at a later date. AWTrs Dow-Jones Industrials (12'00 p.m.) S & P Composite (1200 p.m.) Cumulative Index (5/16/85) 1281. 80 188,13 2450.33 ANTHONY W. TABELL DELAFIELD, HARVEY, TAB ELL INC, No statement or CKpreSSlon 01 opInion or any olher matter herein contained IS or IS to be deemed to be, drreclly or Indrrectly, an offer or the solicitatIon of an offer to buyor seff any security referred to or mentIoned The miltte! IS presented merely for the convenience of the subscriber WhIle we belIeve the sources of our Information to be reliable, we In noway represent or guarantee the accuracy thereof nor of the stalements made herein Any acllon to be taken by the subscnber should be based on hIS own investIgation and information Delafield Harvey, Tabeff Inc, as a corporation and ItS officers or employees, may now have or may later take, POSitIons or trades In respect 10 any seCUrities mentioned In lhls or any future ISsue, and such POSition may be dllferent from any vIews now 01 heleafter eApressed In this or any other Issue Delafield Harvey, Tabell Inc, which IS registered With Ihe SECas an Investment adVisor, may give adVice tOlts rnvestment adVISOry and 01 her customers Independently of any statements made In Ihls or In any other Issue Further InformatIon on any securlly mentIoned herein IS avaIlable on request