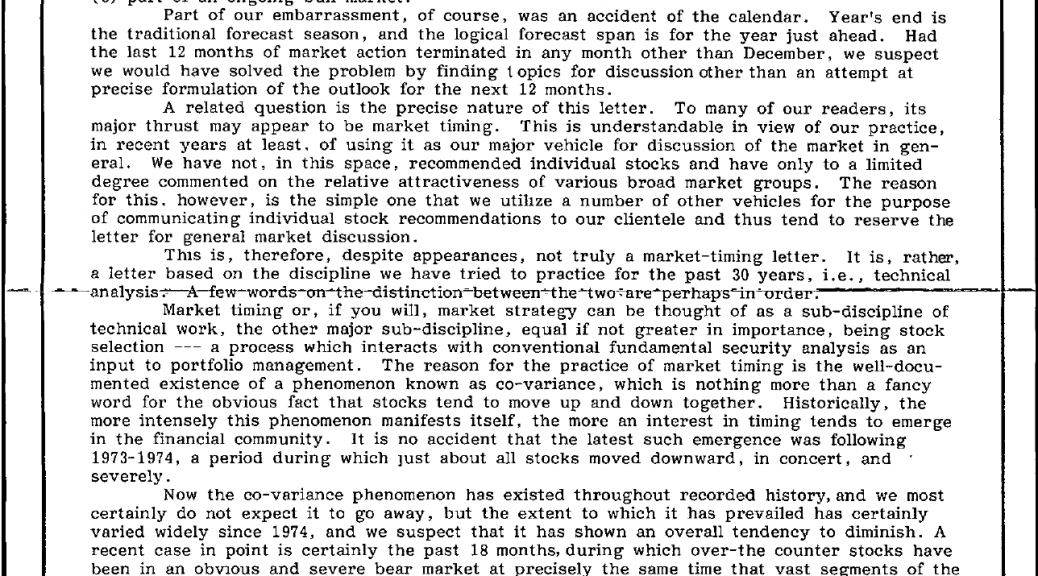 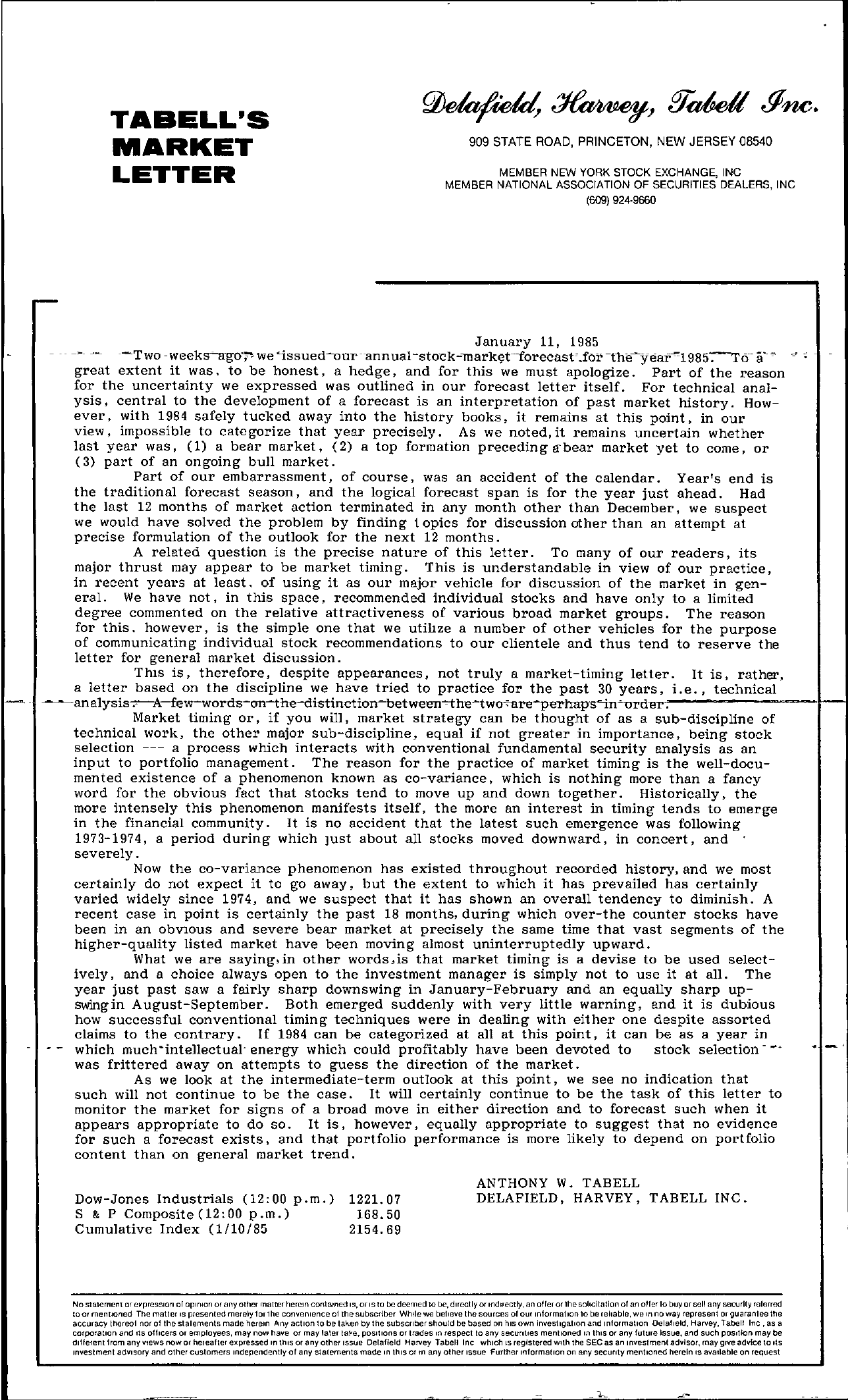 TABELL'S MARKET LETTER 909 STATE ROAD, PRINCETON, NEW JERSEY 08540 MEMBER NEW YORK STOCK EXCHANGE, INC MEMBER NATIONAL ASSOCIATION OF SECURITIES DEALERS, INC (609) 924-9660 January 11, 1985 a. . . .– — —Two -weeksago7 we 'issuedour–annual-stock-l11arkt-forecast.for -rheyear1985–T6- great extent it was, to be honest, a hedge, and for this we must apologize. Part of the reason for the uncertainty we expressed was outlined in our forecast letter itself. For technical analysis, central to the development of a forecast is an interpretation of past market history. However, with 1984 safely tucked away into the history books, it remains at this point, in our view, impossible to categorize that year precisely. As we noted, it remains uncertain whether last year was, (1) a bear market, (2) a top formation preceding a-bear market yet to come, or (3) part of an ongoing bull market. Part of our embarrassment, of course, was an accident of the calendar. Year's end is the traditional forecast season, and the logical forecast span is for the year just ahead. Had the last 12 months of market action terminated in any month other than December, we suspect we would have solved the problem by finding topics for discussion other than an attempt at precise formulation of the outlook for the next 12 months. A related question is the precise nature of this letter. To many of our readers, its major thrust may appear to be market timing. This is understandable in view of our practice, in recent years at least. of using it as our major vehicle for discussion of the market in general. We have not, in this space, recommended individual stocks and have only to a limited degree commented on the relative attractiveness of various broad market groups. The reason for this. however, is the simple one that we utillze a number of other vehicles for the purpose of communicating individual stock recommendations to our clientele and thus tend to reserve the letter for general market discussion. ThIS is, therefore, despite appearances, not truly a market-timing letter. It is, rather, a letter based on the discipline we have tried to practice for the past 30 years, i. e., technical -analysisc-A-few-words-on—th-e–clistinction-betwe-en—the-two,r-e–p-erhaps'in—ord-er. Market timing or, if you will, market strategy can be thought of as a sub-discipline of technical work, the other major sub-discipline, equal if not greater in importance, being stock selection — a process which interacts with conventional fundamental security analysis as an input to portfolio management. The reason for the practice of market timing is the well-documented existence of a phenomenon known as co-variance, which is nothing more than a fancy word for the obvious fact that stocks tend to move up and down together. Historically, the more intensely this phenomenon manifests itself, the more an interest in timing tends to emerge in the financial community. It is no accident that the latest such emergence was following 1973-1974, a period during which just about all stocks moved downward, in concert, and severely. Now the co-variance phenomenon has existed throughout recorded history, and we most certainly do not expect it to go away, but the extent to which it has prevailed has certainly varied widely since 1974, and we suspect that it has shown an overall tendency to diminish. A recent case in point is certainly the past 18 months, during which over-the counter stocks have been in an ObVIOUS and severe bear market at precisely the same time that vast segments of the higher-quality listed market have been moving almost uninterruptedly upward. What we are saying, in other words,is that market timing is a devise to be used selectively, and a choice always open to the investment manager is simply not to use it at all. The year just past saw a fairly sharp downswing in January-February and an equally sharp upswing in August-September. Both emerged suddenly with very little warning, and it is dubious how successful conventional timing techniques were in dealing with either one despite assorted claims to the contrary. If 1984 can be categorized at all at this point, it can be as a year in which much -intellectual- energy which could profitably have been devoted to stock selection – was frittered away on attempts to guess the direction of the market. As we look at the intermediate-term outlook at this point, we see no indication that such will not continue to be the case. It will certainly continue to be the task of this letter to monitor the market for signs of a broad move in either direction and to forecast such when it appears appropriate to do so. It is, however, equally appropriate to suggest that no evidence for such a forecast exists, and that portfolio performance is more likely to depend on portfolio content than on general market trend. Dow-Jones Industrials (1200 p.m.) 1221. 07 S & P Composite (1200 p.m.) 168.50 Cumulative Index (1/10/85 2154.69 ANTHONY W. TAB ELL DELAFIELD, HARVEY, TABELL INC. . -' No statement or erpreSlon 01 opinion or any other mailer herein contained IS, or IS 10 IX.! deemed 10 be, directly or Indirectly. an offer or the solicitation of an 01lerlo buy or sell any security referred toor mentioned The matter IS presented merely forthe convenience 01 the subscriber While we belleve the sources of our Informal Ion to be reliable, weln no way represent or guaranteethe accuracy thereat nor of the stalements made herein Any action 10 be taken bylhe subscriber should be based on hiS own Investigation and information Oelafleld, Harvey, Tabel! Inc, as a corporation and lIs oftlcers or employees, may now have or may taler tare, positions or trades In respect to any secuflltes mentioned In thiS or any future Issue, and such pOSItion may be dllterenl from any views flOW or herealler expressed In thiS or any other Issue Oetaf!eld Harvey Tabell Inc which IS registered With the SECas an Inveslmenladvlsor, may gIve advice 10 lis Investment adVISOry and other customers Independently of any statements made III thiS or III any other Issue Further Information on any securrty mentioned herein IS available on request