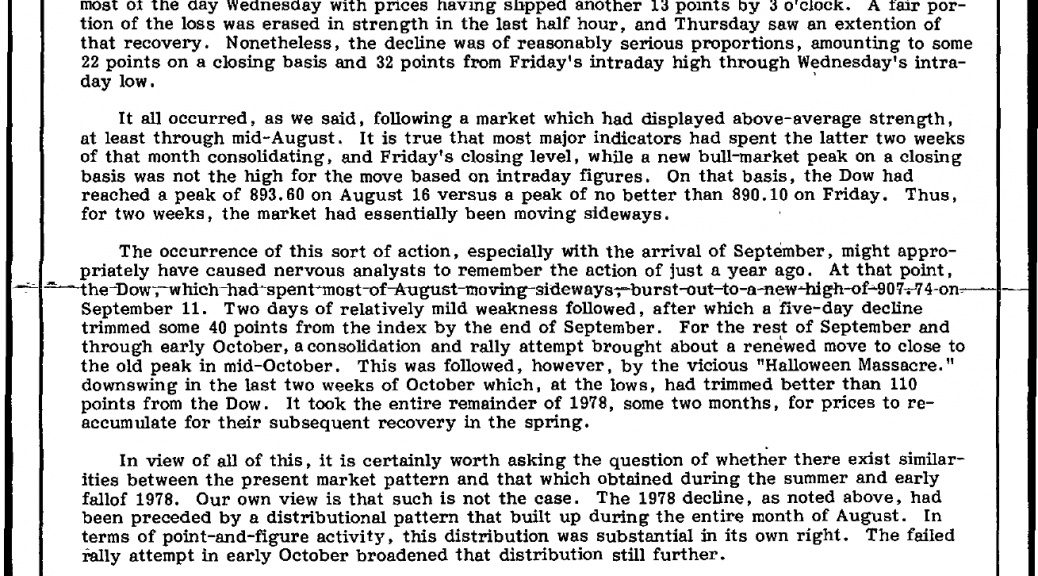 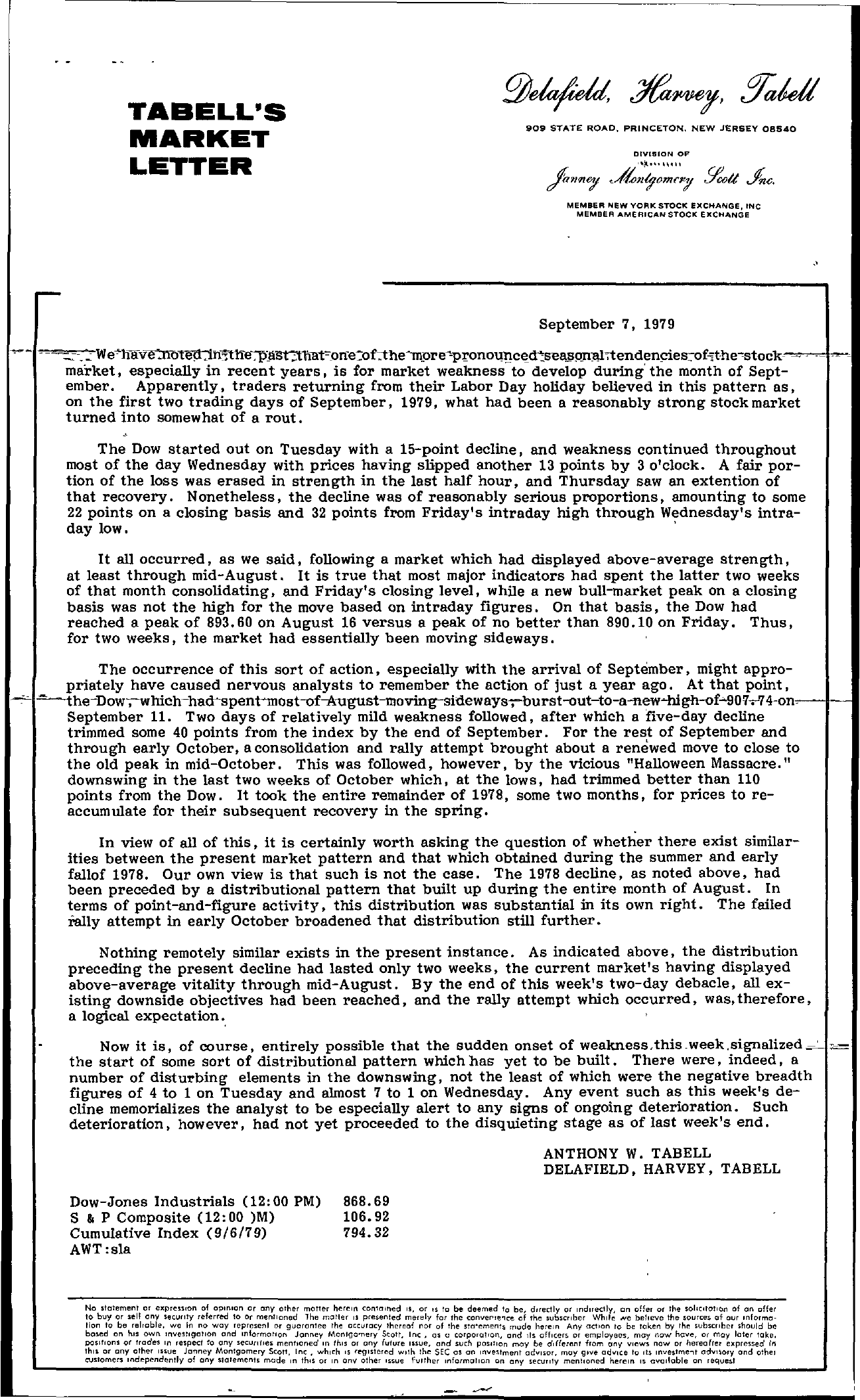 TABELL'S MARKET LETTER 909 STATE ROAD, PRINCETON, NEW JERSEY 08540 DIVISION OF '.., … I\Ul Jiw,,,! .,4,ll,om,,,J' J!c, MEMBER NEW YORK STOCK EXCHANGE, INC MEMBER AMERICAN STOCK eXCHANGE September 7, 1979 -. market, especially in recent years, is for market weakness to develop dUring'the month of September. Apparently, traders returning from their Labor Day holiday believed in this pattern as, on the first two trading days of September, 1979, what had been a reasonably strong stockmarket turned into somewhat of a rout. The Dow started out on Tuesday with a 15-point decline, and weakness continued throughout most of the day Wednesday with prices having slipped another 13 points by 3 o'clock. A fair por- tion of the loss was erased in strength in the last half hour, and Thursday saw an extention of that recovery. Nonetheless, the decline was of reasonably serious proportions, amounting to some 22 points on a closing basis and 32 points from Friday's intraday high through Wednesday's intra- day low. ' It all occurred, as we said, following a market which had displayed above-average strength, at least through mid-August. It is true that most major indicators had spent the latter two weeks of that month consolidating, and Friday's closing level, while a new bull-market peak on a closing basis was not the high for the move based on intraday figures. On that basis, the Dow had reached a peak of 893.60 on August 16 versus a peak of no better than 890.10 on Friday. Thus, for two weeks, the market had essentially been moving sideways. The occurrence of this sort of action, especially with the arrival of September, might appropriately have caused nervous analysts to remember the action of just a year ago. At that point, -c -1- September 11. Two days of relatively mild weakness followed, after which a five-day decline trimmed some 40 points from the index by the end of September. For the rest of September and through early October, a consolidation and rally attempt brought about a renewed move to close to the old peak in mid-October. This was followed, however, by the vicious Halloween Massacre. downswing in the last two weeks of October which, at the lows, had trimmed better than 110 points from the Dow. It took the entire remainder of 1978, some two months, for prices to reaccumulate for their subsequent recovery in the spring. In view of all of this, it is certainly worth asking the question of whether there exist similarities between the present market pattern and that which obtained during the summer and early fallof 1978. Our own view is that such is not the case. The 1978 decline, as noted above, had been preceded by a distributional pattern that built up during the entire month of August. In terms of point-and-figure activity, this distribution was substantial in its own right. The failed rally attempt in early October broadened that distribution still further. Nothing remotely similar exists in the present instance. As indicated above, the distribution preceding the present decline had lasted only two weeks, the current market's having displayed above-average vitality through mid-August. By the end of this week's two-day debacle, all existing downside objectives had been reached, and the rally attempt which occurred, was, therefore, a logical expectation., Now it is, of course, entirely possible that the sudden onset of weakness,this.week,signalized,-the start of some sort of distributional pattern which has yet to be built. There were, indeed, a number of disturbing elements in the downswing, not the least of which were the negative breadth figures of 4 to 1 on Tuesday and almost 7 to 1 on Wednesday. Any event such as this week's decline memorializes the analyst to be especially alert to any signs of ongoing deterioration. Such deterioration, however, had not yet proceeded to the disquieting stage as of last week's end. ANTHONY W. TABELL DELAFIELD, HARVEY, TAB ELL Dow-Jones Industrials (1200 PM) S & P Composite (12 00 )M) Cumulative Index (9/6/79) AWT sla 868.69 106.92 794.32 No totemenl Of expressIon of opinion or any other motter herein COntOined IS, or IS 10 be deemed jo be, directly or indirectly, on offer or Ihe solic.tot.on of on offer to buy or sel! any securIty referred 10 or mentIoned The matter IS presented merely for the convefl'e'1l;e of the subSCriber White NC behevc the sources of our informa- tion to be reliable, we In no woy represent or guarantee the accuracy Ihereof nor of the slaements mude herein Any acllon to be Token by the subscriber should be ball'ld on hiS own Invcst'gat,on and mformatlon Janney Monlgoncry Stott, Inc, os (I corporaTtOn, and Its or employees, may now have, or may later take, positions or Trades In respect fa any seCUrilles menhoned tn thtS or any fmure lSue, and sucli POSITion moy be dtrerenT from any vIews now or hereaftet c)pressed in th or any other Issue Janney Montgomery ScoT!, Inc, which tS registered With the SEC as on Investment adVisor, may gIVe adVice to Its Investme.,t and othe, customers Independently of any statements mode 11'1 th.s or 11'1 on… other Issue Further InformatIOn on any security mentioned herem IS available on request