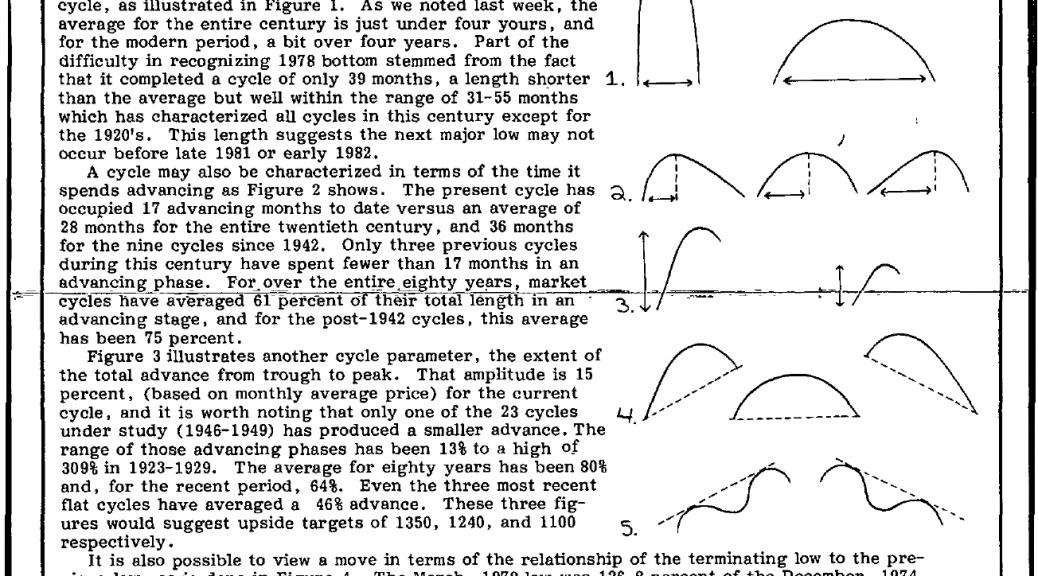 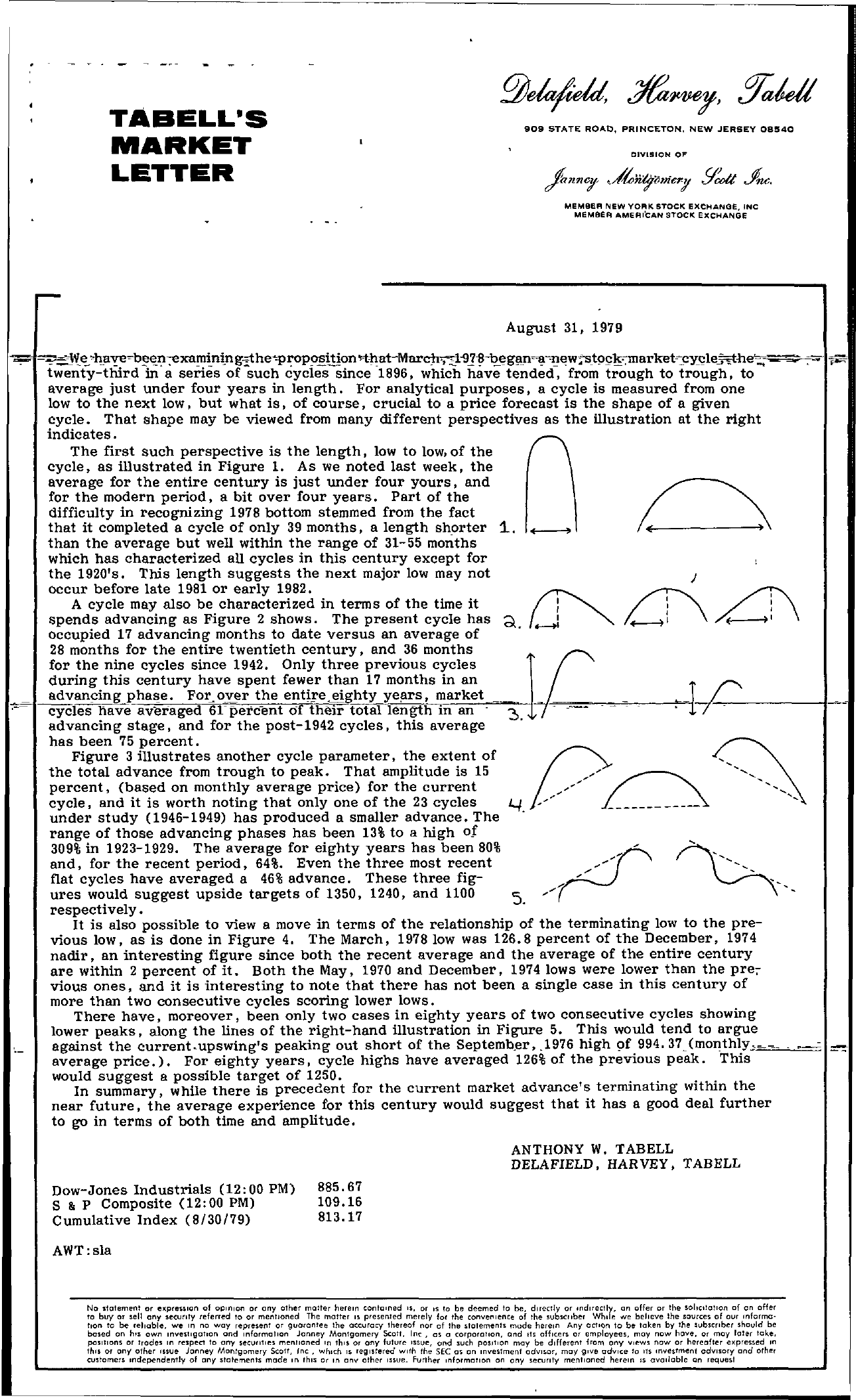 TABELL'S MARKET LETTER 909 STATE ROAD, PRINCETON, NEW JERSEY 08540 DIVISION OF MEMBER NEW YOAK STOCK EXCHANGe, INC AMERICAN STOCI( eXCHA.NGE August 31. 1979 – twenty-third in a series of such cycles since 1896. which have tended. from trough to trough. to average just under four years in length. For analytical purposes. a cycle is measured from one low to the next low. but what is. of course. crucial to a price forecast is the shape of a given cycle. That shape may be viewed from many different perspectives as the illustration at the right indicates. The first such perspective is the length. low to low. of the cycle. as illustrated in Figure 1. As we noted last week. the average for the entire century is just under four yours. and for the modern period. a bit over four years. Part of the difficulty in recognizing 1978 bottom stemmed from the fact that it completed a cycle of only 39 months. a length shorter 1.. ——- than the average but well within the range of 31- 55 months which has characterized all cycles in this century except for the 1920's. This length suggests the next major low may not occur before late 198101' early 1982. A cycle may also be characterized in terms of the time it spends advancing as Figure 2 shows. The present cycle has d-. occupied 17 advancing months to date versus an average of 28 months for the entire twentieth century. and 36 months for the nine cycles since 1942. Only three previous cycles during this century have spent fewer than 17 months in an advancing pha!!e. For over the entire eighty yellrs. market cycles have averaged 61perc-ent of their total length in an advancing stage. and for the post-1942 cycles. this average has been 75 percent. Figure 3 illustrates another cycle parameter. the extent of the total advance from trough to peak. That amplitude is 15 percent. (based on monthly average price) for the current cycle. and it is worth noting that only one of the 23 cycles under study (1946-1949) has produced a smaller advance. The range of those advancing phases has been 13 to a high of 309 in 1923-1929. The average for eighty years has been 80 and. for the recent period. 64. Even the three most recent flat cycles have averaged a 46 advance. These three fig- ures would suggest upside targets of 1350. 1240. and 1100 respectively. 5. It is also possible to view a move in terms of the relationship of the terminating low to the pre- vious low. as is done in Figure 4. The March. 1978 low was 126.8 percent of the December. 1974 nadir. an interesting figure since both the recent average and the average of the entire century are within 2 percent of it. Both the May. 1970 and December. 1974 lows were lower than the vious ones. and it is interesting to note that there has not been a single case in this century of more than two consecutive cycles scoring lower lows. There have. moreover. been only two cases in eighty years of two consecutive cycles showing lower peaks. along the lines of the right-hand illustration in Figure 5. This would tend to argue against the current.upswing's peaking out short of the Septemb.er . 1976 high of 994. average price.). For eighty years. cycle highs have averaged 126 of the previous peak. This would suggest a possible target of 1250. , .. .. In summary. while there is precedent for the current market advance s termmatmg WIthin the near future. the average experience for this century would suggest that it has a good deal further to go in terms of both time and amplitude. Dow-Jones Industrials (12 00 PM) S & P Composite (1200 PM) Cumulative Index (8/30/79) 885.67 109.16 813.17 ANTHONY W. TAB ELL DELAFIELD. HARVEY. TABELL AWTsla No ,tolement or expression of opinion or cny OTher matter herein contolned IS, or IS to be deemed 10 be, directly or indirectly. on offer or the soilcltotlon of on offer to buy or sell any security referred to or mentioned The matter IS presented merely for the converlence of the subSCriber While we believe the sources of our information to be reliable, we In no woy represent or guorontee the accuracy thereof nor of the stotements mode herein Any octlon to be token by the ubscrlber should be based on hl own InvestigaTIon ond Informotlon Janney Montgomery Scott, Inc, as a corporation, and Its officers or employees, moy now have, or may lofer toke, positions or Irodes In respect to any securities mentioned In thiS or any future Issue, and such pOSition may be different from ony views now or hereafter expressed In thiS or any atker Issue Janney Montgomery Sco11, Inc, wklCn IS registered wltk tke SEC as on invesTment odvisor, may give odvlce 10 ITS Investment adVisory and ather customers Independently of any statements made In thiS or In anv other lSue Further information on any security mentioned herein IS avollable on request