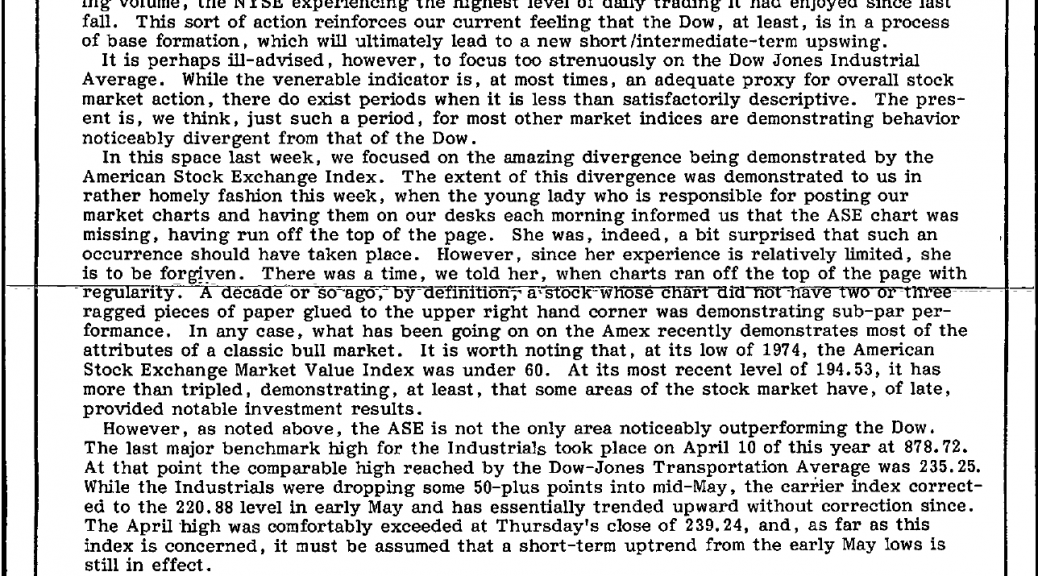 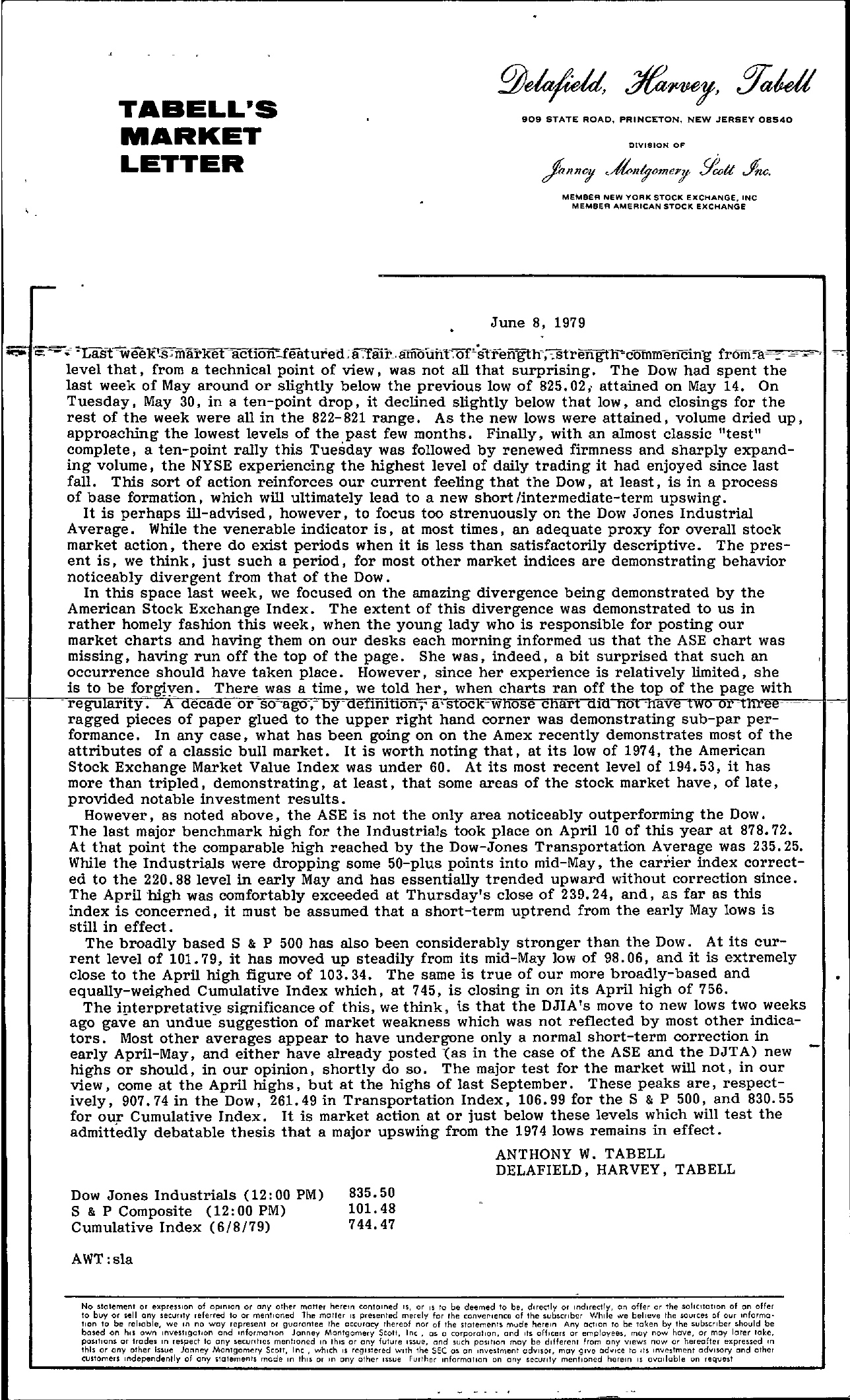 TABELL-S MARKET LETTER 909 STATE ROAD, PRINCETON, NEW JERSEY 08540 DIVISION OF MEMBER NEW YORK STOCK eXCHANGE. tNC MEMBER AMERICAN STOCK E)(CHANGE – June 8, 1979 ..,..' -weeK'-s'iil'iil'ket acfionJeaturecLaf8ir–Elmoufieof'strEm-gth–;strengtlPcommencin-g from,a – – level that, from a technical point of view, was not all that surprising. The Dow had spent the last week of May around or slightly below the previous low of 825.02, attained on May 14. On Tuesday, May 30, in a ten-point drop, it declined slightly below that low, and closings for the rest of the week were all in the 822- 821 range. As the new lows were attained, volume dried up, approaching the lowest levels of the past few months. Finally, with an almost classic test complete, a ten-point rally this Tuesday was followed by renewed firmness and sharply expand- ing volume, the NYSE experiencing the highest level of daily trading it had enjoyed since last fall. This sort of action reinforces our current feeling that the Dow, at least, is in a process of base formation, which will ultimately lead to a new short /intermediate-term upswing. It is perhaps ill-advised, however, to focus too strenuously on the Dow Jones Industrial Average. While the venerable indicator is, at most times, an adequate proxy for overall stock market action, there do exist periods when it is less than satisfactorily descriptive. The pres- ent is, we think, just such a period, for most other market indices are demonstrating behavior noticeably divergent from that of the Dow. In this space last week, we focused on the amazing divergence being demonstrated by the American Stock Exchange Index. The extent of this divergence was demonstrated to us in rather homely fashion this week, when the young lady who is responsible for posting our market charts and having them on our desks each morning informed us that the ASE chart was missing, having run off the top of the page. She was, indeed, a bit surprised that such an occurrence should have taken place. However, since her experience is relatively limited, she is to be forgiven. There was a time, we told her, when charts ran off the top of the page with A decade or so-ago-, by defiffitlon, a'stocK'WH6se chartailnotnav cwu UL–a-w ragged pieces of paper glued to the upper right hand corner was demonstrating sub-par per- formance. In any case, what has been going on on the Amex recently demonstrates most of the attributes of a classic bull market. It is worth noting that, at its low of 1974, the American Stock Exchange Market Value Index was under 60. At its most recent level of 194.53, it has more than tripled, demonstrating, at least, that some areas of the stock market have, of late, provided notable investment results. However, as noted above, the ASE is not the only area noticeably outperforming the Dow. The last major benchmark high for the Industrials took place on April 10 of this year at 878.72. At that point the comparable high reached by the Dow-Jones Transportation Average was 235.25. While the Industrials were dropping some 50-plus points into mid-May, the carrier index correct- ed to the 220.88 level in early May and has essentially trended upward without correction since. The April -high was comfortably exceeded at Thursday's close of 239.24, and, as far as this index is concerned, it must be assumed that a short-term uptrend from the early May lows is still in effect. The broadly based S & P 500 has also been considerably stronger than the Dow. At its cur- rent level of 101. 79, it has moved up steadily from its mid-May low of 98.06, and it is extremely close to the April high figure of 103.34. The same is true of our more broadly-based and equally-weighed Cumulative Index which, at 745, is closing in on its April high of 756. The interpretative significance of this, we think, lS that the DJIA's move to new lows two weeks ago gave an unduesuggestion of market weakness which was not reflected by most other indica- tors. Most other averages appear to have undergone only a normal short-term correction in early April-May, and either have already posted -(as in the case of the ASE and the DJTA) new highs or should, in our opinion, shortly do so. The major test for the market will not, in our view, come at the April highs, but at the highs of last September. These peaks are, respect- ively, 907.74 in the Dow, 261. 49 in Transportation Index, 106.99 for the S & P 500, and 830.55 for our Cumulative Index. It is market action at or just below these levels which will test the admittedly debatable thesis that a major upswing from the 1974 lows remains in effect. ANTHONY W. TAB ELL DELAFIELD, HARVEY, TABELL Dow Jones Industrials (12 00 PM) S & P Composite (1200 PM) Cumulative Index (6/8/79) 835.50 101. 48 744.47 AWT sla No statement or expression of Opinion or any other moiler herein contolned IS, or IS 10 be deemed to be, dlrCc1ly or Indirectly, on offer or the SOllCllallon of on offer to buy or sell any referred to or mentioned The morter IS presented merely for the conVeilenCe of the subscriber While we believe the sources of our informa- Tion To be reliable, we In no way represent or guarantee the accuracy thereof nor of the mude herein Any action To be token by the subSCriber should be based on hiS own Investigation and Information Janney Montgomery SCali. Inc, as a corporation, and Its offiCers or employees, may now have, or may later toke, positions or trades In respect to any securities mentioned In thiS or ony future Issue, and such POSition may be different from any views now or hereafter expressed In this or any other ISlue Janney Montgomery Scott, Inc, which 15 registered With the SEC as on Investment adVisor, moy give adVice to Its Investment adVISOry and other customers Independently of any statements mode In thiS or In any other Issue Further Information on any security mentioned herein IS available on request