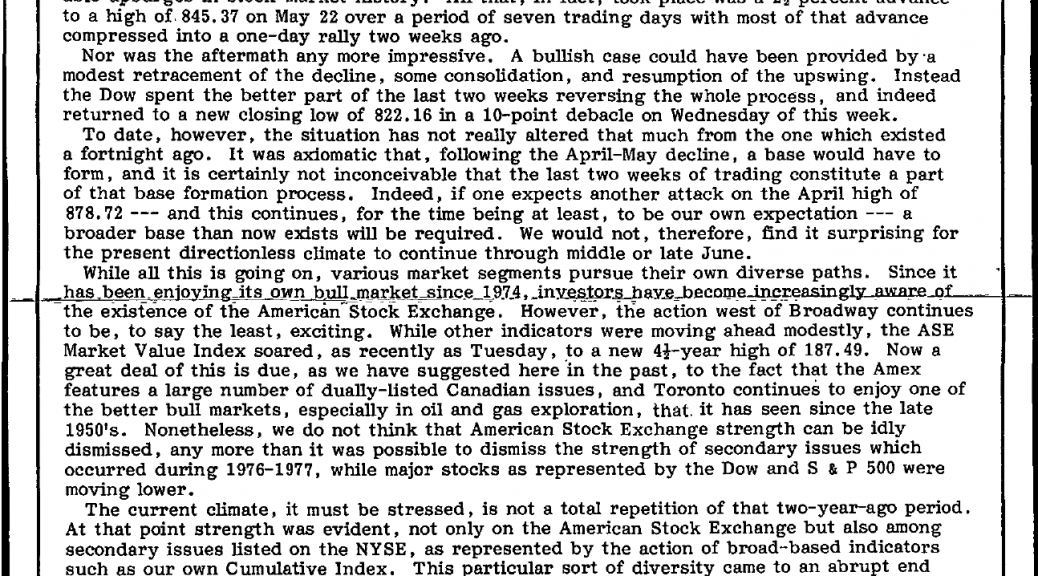 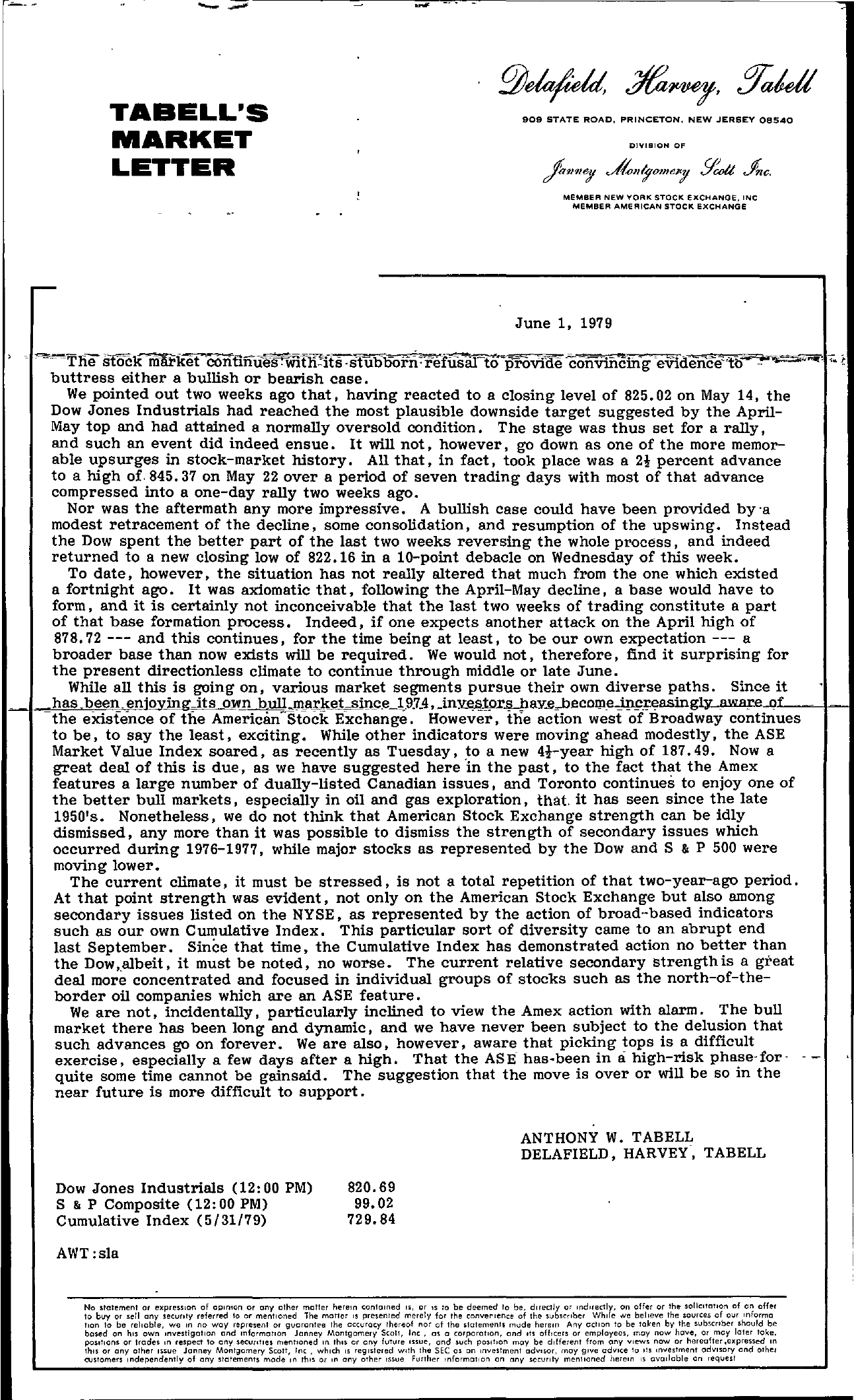 —- TABELL'S MARKET LETTER 909 STATE ROAD, PRINCETON, NEW JERSEY 08540 DIVISION OF MEMBER NEW YORK STOCK EXCHANGE, INC MEMBER AMERICAN STOCK EXCHANGE – June 1, 1979 Tlieo … tost-Uboofn.'refu5aI proViae conviricmg . t buttress either a bullish or bearish case. We pointed out two weeks ago that, having reacted to a closing level of 825.02 on May 14, the Dow Jones Industrials had reached the most plausible downside target suggested by the April- May top and had attained a normally oversold condition. The stage was thus set for a rally, and such an event did indeed ensue. It will not, however, go down as one of the more memor- able upsurges in stock-market history. All that, in fact, took place was a 2t percent advance to a high of. 845. 37 on May 22 over a period of seven trading days with most of that advance compressed into a one-day rally two weeks ago. Nor was the aftermath any more impressive. A bullish case could have been provided by a modest retracement of the decline, some consolidation, and resumption of the upswing. Instead the Dow spent the better part of the last two weeks reversing the whole process, and indeed returned to a new closing low of 822.16 in a lO-point debacle on Wednesday of this week. To date, however, the situation has not really altered that much from the one which existed a fortnight ago. It was axiomatic that, following the April-May decline, a base would have to form, and it is certainly not inconceivable that the last two weeks of trading constitute a part of that base formation process. Indeed, if one expects another attack on the April high of 878.72 — and this continues, for the time being at least, to be our own expectation — a broader base than now exists will be required. We would not, therefore, find it surprising for the present directionless climate to continue through middle or late June. While all this is going on, various market segments pursue their own diverse paths. Since it has been. enjQying its own bull.maxkeLsm.l!ei9H, awar'Lql.Lf–lI–1 the eXistence of tlie American Stock Exchange. However, hie action west of Broadway continues to be, to say the least, exciting. While other indicators were moving ahead modestly, the ASE Market Value Index soared, as recently as Tuesday, to a new 4t-year high of 187.49. Now a great deal of this is due, as we have suggested here in the past, to the fact that the Amex features a large number of dually-listed Canadian issues, and Toronto continues to enjoy one of the better bull markets, especially in oil and gas exploration, that. it has seen since the late 1950's. Nonetheless, we do not think that American Stock Exchange strength can be idly dismissed, any more than it was possible to dismiss the strength of secondary issues which occurred during 1976-1977, while major stocks as represented by the Dow and S & P 500 were moving lower. The current climate, it must be stressed, is not a total repetition of that two-year-ago period. At that point strength was evident, not only on the American Stock Exchange but also among secondary issues listed on the NYSE, as represented by the action of broad-based indicators such as our own Cumulative Index. This particular sort of diversity came to an abrupt end last September. Since that time, the Cumulative Index has demonstrated action no better than the Dow,.albeit, it must be noted, no worse. The current relative secondary strength is a great deal more concentrated and focused in individual groups of stocks such as the north-of-the- border oil companies whiCh are an ASE feature. We are not, incidentally, particularly inclined to view the Amex action with alarm. The bull market there has been long and dynamic, and we have never been subject to the delusion that such advances go on forever. We are also, however, aware that picking tops is a difficult exercise, especially a few days after a high. That the ASE hasbeen in a pha;;e-for- quite some time cannot be gainsaid. The suggestion that the move is over or WIll be so m the near future is more difficult to support. Dow Jones Industrials (12 00 PM) S & P Composite (12 00 PM) Cumulative Index (5/31/79) AWTsla 820.69 99.02 729.84 ANTHONY W. TABELL DELAFIELD, HARVEY', TABELL No statement or expreSSion of OPinion or any olher matter herein contained IS, or 's to be deemed 10 be, directly or II'Idorectly, on offer or the solicitatIon of on offer to buy or sell any security referred to or mentioned The matter IS presented merely for the convellcnCe of the subscriber While oNe believe the sources of ow Informa tlon to be reliable, we In no way represent or guorontee the occuracy thereof nor of thc stotements mude herEin Any octlon to be taJEn by the subscnber should be based on hiS own investigation and Informotlon Janney Montgomery Scott, Inc, as a corporation, and ,ts off,cers or employees, may now have, or moy later toke, pos,tlons or trades In respect to any seuntles menhoned In Ih'5 or any future Issue, and such posil,on may be different from ony views now or hereafter ,expressed In Ihu or any other Issue Jonney Montgomery Scott, Inc, which IS registered with the SEC as on Investment adVisor, may give adVICe to lis Investment odvlsory and olhel customers Independently of any slatements made ,n thiS or In any olher Issue Further Informotlon on any security mentioned herein IS available on request