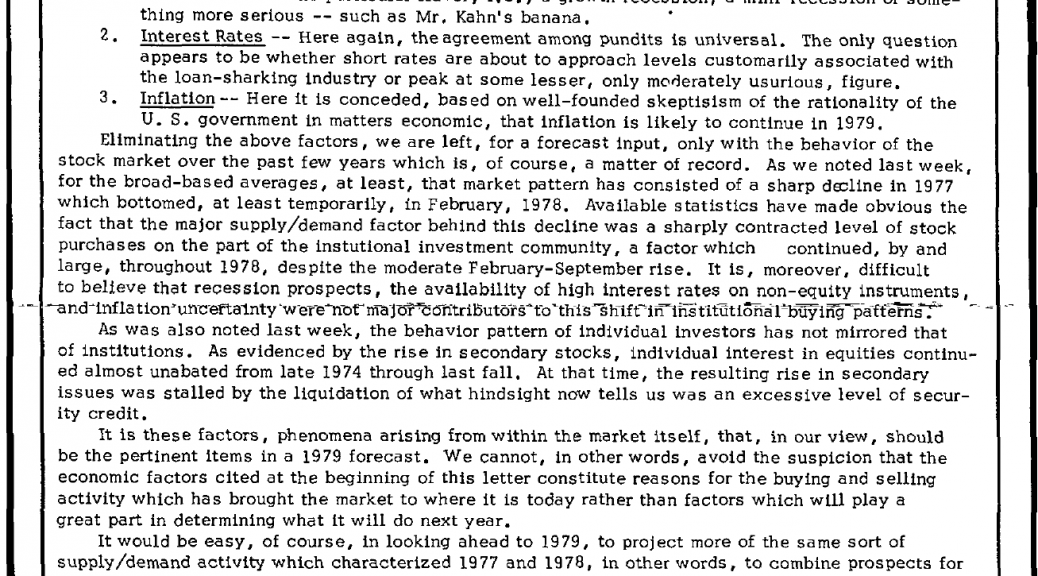 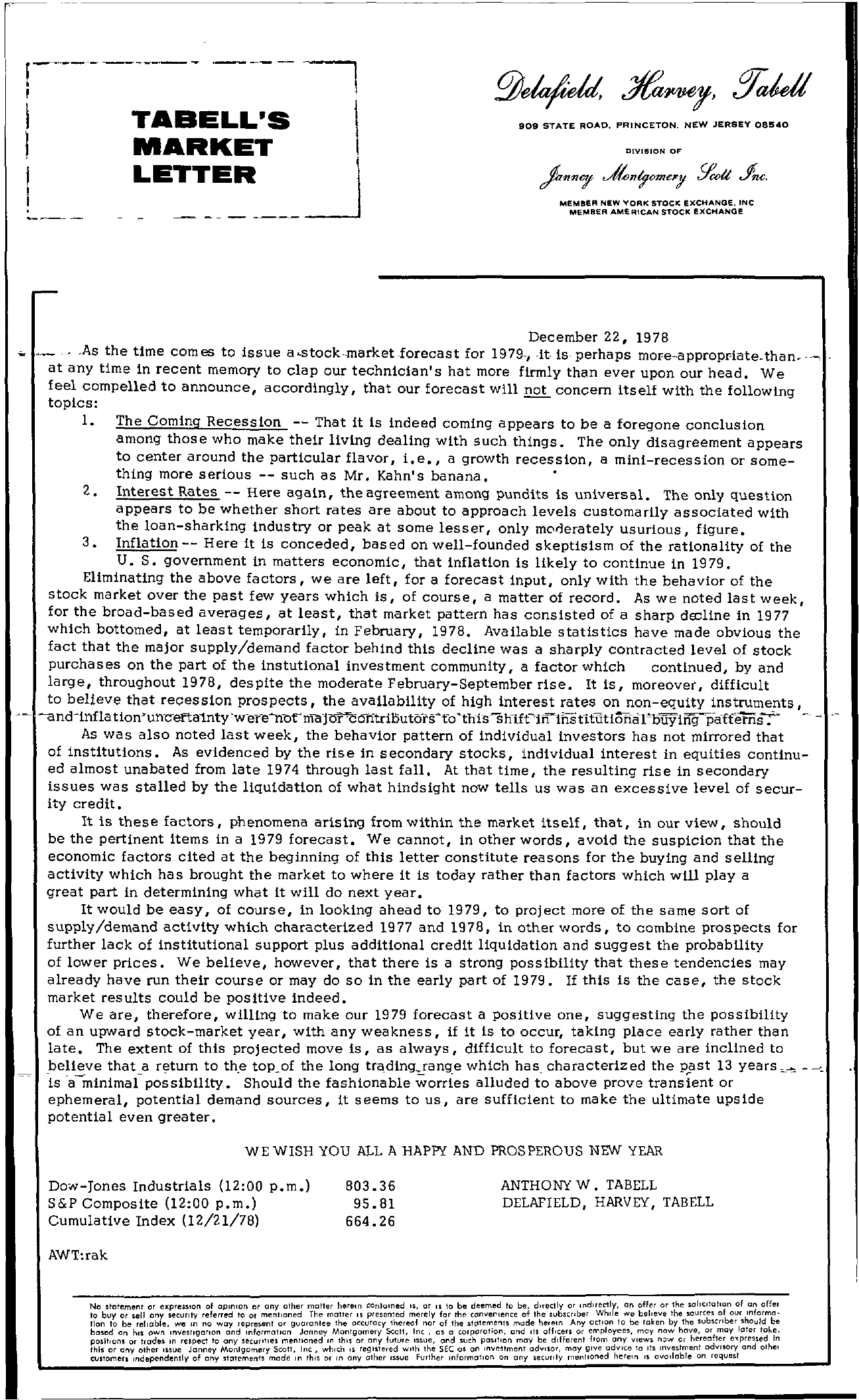 .—- —'1 ,I I II TABELL'S MARKET \ 909 STATE ROAD. PRINCETON, NEW JERSEY 08!540 DIYISION OF MEM8ER NEW YOAK STOCK EXCHANGE, INC MEMBER AMERICAN STOCK EXCHANGE December 22, 1978 As the time comes to issue a,stockmarketforecast for 1979, it is perhaps mOfe-appropl'iate.than.- . at any time in recent memory to clap our technician's hat more firmly than ever upon our head. We feel compelled to announce, accordingly, that our forecast will not concern itself with the follOWing topics 1. The Coming Recession — That it is indeed coming appears to be a foregone conclusion among those who make their living dealing with such things. The only disagreement appears to center around the particular flavor, i.e., a growth recession, a mini-recession or some- thing more serious — such as Mr. Kahn's banana. 2. Interest Rates — Here again, the agreement among pundits is universal. The only question appears to be whether short rates are about to approach levels customarily associated with the loan-sharking industry or peak at some lesser, only morlerately usurious, figure. 3. Inflation — Here it is conceded, based on well-founded skeptisism of the rationality of the U. S. government in matters economic, that inflation is likely to continue in 1979. Eliminating the above factors, we are left, for a forecast input, only with the behavior of the stock market over the past few years which is, of course, a matter of record. As we noted last week, for the broad-based averages, at least, that market pattern has consisted of a sharp decline in 1977 which bottomed, at least temporarily, in February, 1978. Available statistics have made obvious the fact that the major supply/demand factor behind this decline was a sharply contracted level of stock purchases on the part of the instutional investment community, a factor which continued, by and large, throughout 1978, despite the moderate February-September rise. It is, moreover, difficult to believe that recession prospects, the availability of high interest rates on non-equity instruments, – – –a nd-infla t ion'uncefta1nty major'(ontrtOutcfts-to lfifC1l1inst1rutioncWBuy ingp'aTteTris7 As was also noted last week, the behavior pattern of indiVidual investors has not mirrored that of institutions. As evidenced by the rise in secondary stocks, individual interest in equities continu- ed almost unabated from late 1974 through last fall. At that time, the resulting rise in secondary issues was stalled by the liquidation of what hindsight now tells us was an excessive level of secur- ity credit. It is these factors, phenomena arising from within the market itself, that, in our view, should be the pertinent items in a 1979 forecast. We cannot, in other words, avoid the suspicion that the economic factors cited at the beginning of this letter constitute reasons for the buying and selling activity which has brought the market to where it is today rather than factors which will playa great part in determining what it will do next year. It would be easy, of course, in looking ahead to 1979, to proj ect more of the same sort of supply/demand activity which characterized 1977 and 1978, in other words, to combine prospects for further lack of institutional support plus additional credit liquidation and suggest the probability of lower prices. We believe, however, that there is a strong possibility that these tendencies may already have run their course or may do so in the early part of 1979. If this is the case, the stock market results could be positive indeed. We are, therefore, willing to make our 1979 forecast a positive one, suggesting the possibility of an upward stock-market year, with any weakness, if it is to occur, taking place early rather than late. The extent of this projected move is, as always, difficult to forecast, but we are inclined to believe that a return to the top of the long tradingrange which has characterized the past 13 is a-minimaf possibility. Sho;ld the fashionable worries alluded to above prove transient or ephemeral, potential demand sources, it seems to us, are sufficient to make the ultimate upside potential even greater. WEWISH YOU ALL A HAPPY AND PROSPEROUS NEVV YEAR Dml'-Jones Industrials (1200 p.m.) S&P Composite (1200 p.m.) Cumulative Index (12/21/78) 803.36 95.81 664.26 ANTHONY W. TABELL DELAFIELD, HARVEY, TAB ELL AWTrak No totement or expressIon of opinIon or any other matter herein 'Onjolned IS, or 15 to be deemed to be, dIrectly or ,ndlrectly, on offer or the solicltahon of on offer to buy or sell cny security referred to or mentioned The mailer IS presented merely for the converlence of the subscflber While we believe the sources of our hnformb.; lion to be relloble we In no way or guarantee the accuracy thereof nor of the stotements mlde herein Any action to be taken by the subscrlberls auld based on hiS c)wn' investigatIOn and Information Janney Montgomery Scali, Inc, as a corporotion, and Its officers or employees, may now havc, or may oler to e, positIOns or trades In respect to any secufliles mentioned In thiS or any future Issue, and such position moy be different from any Views n'JW or hereafter e'lpressed In this or any other ISsue Janney Montgomery Scott, Inc, which IS registered With the SEC as on Investment adVisor, may give adVice to lIs Investment and othel cUltomerS Independently of any stotemenls made In thiS or In any other Issue Further information on any security mentioned herein IS ovoilable on equ s\