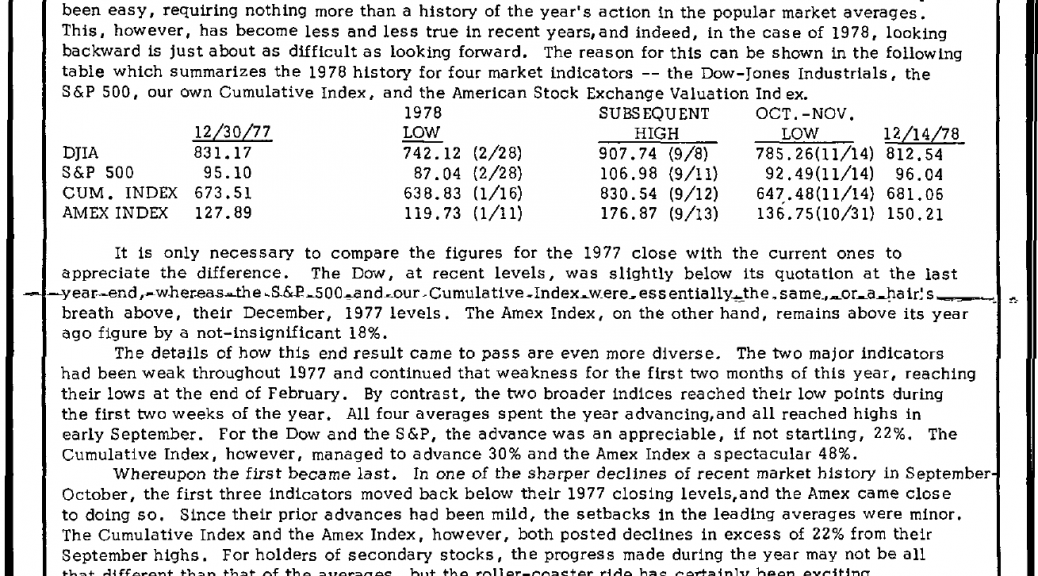 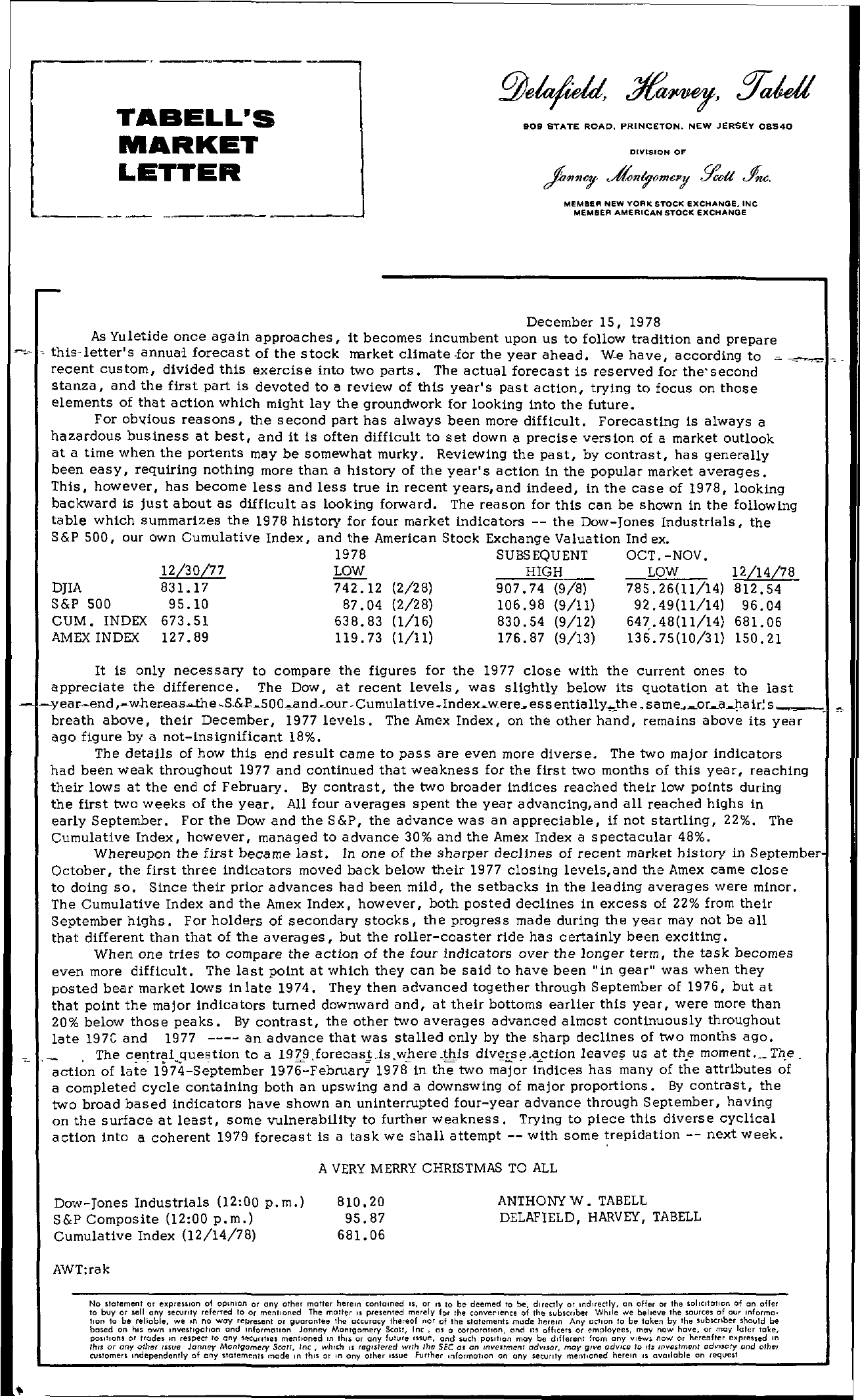 TABELL'S MARKET LETTER . – l 909 STATE ROAD, PRINCETON. NEW JERSEy 08540 DIVISION OF MEMBEA NEW YORI( STOCK EXCHANGE, INC MEMBER AMERICAN STOCI EXCHANGE December 15, 1978 As Yuletide once again approaches, it becomes incumbent upon us to follow tradition and prepare -, this-Ietter's annual forecast of the stock market climate for the year ahead. Woe have, according to recent custom, divided this exercise into two parts. The actual forecast is reserved for the'second stanza, and the first part is devoted to a review of this year's past action, trying to focus on those elements of that action which might lay the groundwork for looking into the future. For ob\(ious reasons, the second part has always been more difficult. Forecasting is always a hazardous business at best, and it is often difficult to set down a precise version of a market outlook at a time when the portents may be somewhat murky. Reviewing the past, by contrast, has generally been easy, requiring nothing more than a history of the year's action in the popular market averages. This, however, has become less and less true in recent years, and indeed, in the case of 1978, looking backward is Just about as difficult as looking forward. The reason for this can be shown in the following table which summarizes the 1978 history for four market indicators — the Dow-Jones Industrials, the S&P 500, our own Cumulative Index, and the American Stock Exchange Valuation Ind ex. 12/30/77 1978 JR!!… SUBSEQUENT HIGH OCT. -NOV. LOW 12/14/78 DJIA 831. 17 742.12 (2/28) 907.74 (9/8) 785.26(11/14) 812.54 S&P 500 95.10 87.04 (2/28) 106.98 (9/11) 92.49(11/14) 96.04 CUM. INDEX 673.51 638.83 (1/16) 830.54 (9/12) 647.48(11/14) 681.06 AMEX INDEX 127.89 119.73 (1/11) 176.87 (9/13) 136.75(10/31) 150.21 It is only necessary to compare the figures for the 1977 close with the current ones to appreciate the difference. The Dow, at recent levels, was slightly below its quotation at the last – -year–end ,-wher.easthe – ess entiallY.,the . same.,oraha s breath above, their December, 1977 levels. The Amex Index, on the other hand, remains above its year ago figure by a not-insignificant 18. The details of how this end result came to pass are even more diverse. The two major indicators had been weak throughout 1977 and continued that weakness for the first two months of this year, reaching their lows at the end of February. By contrast, the two broader indices reached their low points during the first two weeks of the year. All four averages spent the year advancing, and all reached highs in early September. For the Dow and the S&P, the advance was an appreciable, if not startling, 22. The Cumulative Index, however, managed to advance 30 and the Amex Index a spectacular 48. Whereupon the first became last. In one of the sharper declines of recent market history in September October, the first three indicators moved back below their 1977 closing levels,and the Amex came close to doing so. Since their prior advances had been mild, the setbacks in the leading averages were minor. The Cumulative Index and the Amex Index, however, both posted declines in excess of 22 from their September highs. For holders of secondary stocks, the progress made during the year may not be all that different than that of the averages, but the roller-coaster ride has certainly been exciting. When one tries to compare the action of the four indicators over the longer term, the task becomes even more difficult. The last point at which they can be said to have been in gear was when they posted bear market lows inlate 1974. They then advanced together through September of 1976, but at that point the major indicators turned downward and, at their bottoms earlier this year, were more than 20 below those peaks. By contrast, the other two averages advanced almost continuously throughout late 197C and 1977 —- an advance that was stalled only by the sharp declines of two months ago. ,The to a leaves us at th.e moment … Th,e. action of late 1974-September 1976-February 1978 in the two major indices has many of the attributes of a completed cycle containing both an upswing and a downswing of major proportions. By contrast, the two broad based indicators have shown an uninterrupted four-year advance through September, having on the surface at least, some vulnerability to further weakness. Trying to piece this diverse cyclical action into a coherent 1979 forecast is a task we shall attempt — with some trepidation — next week. A VERY MERRY CHRISTMAS TO ALL Dow-Jones Industrials (1200 p.m.) S&P Composite (1200 p.m.) Cumulative Index (12/14/78) 810.20 95.87 681.06 ANTHONY W. TABELL DELAFIELD, HARVEY, TABELL AWTrak No llolemenl or exprenlon of opinion or any oTher motler herein conlcllned IS, or to be deemed to be, directly or mdltec1Ir,' on oHer or the sollcltotlon of on offer to bvy or sell ony seo,l11ly referred 10 or menTioned The matter IS presented merely for the converlence of the subSCriber Wh, e oNe believe the sources of our Informo- lion 10 be relloble, we In no way represenl or guorantee accuracy Ihereof nor of the statements mude herein Any oCflon to be token by the subSCriber should be bosed on hiS own Investigation and mformallon Janney Montgomery Seoll, Inc, 0 a corporation, and 115 officers or employees, may now have, or may later toke, positions or Irades In respeCf 10 any securilies mentioned In thiS or any fulure Issue, and such POltlon may be different from any views now or hereafter expresed In thiS or any other ISSue Janney Montg'omery Seo, Inc, which 15 registered With the SEC ar an /IIveJtment advuor, may give advlIe to Its Investment odvI50ry and othel customen Independently of any statements mode In Ih,s or In any other Issue Further InformOllon on any Seturlly mentioned herein IS aVOIlable on request