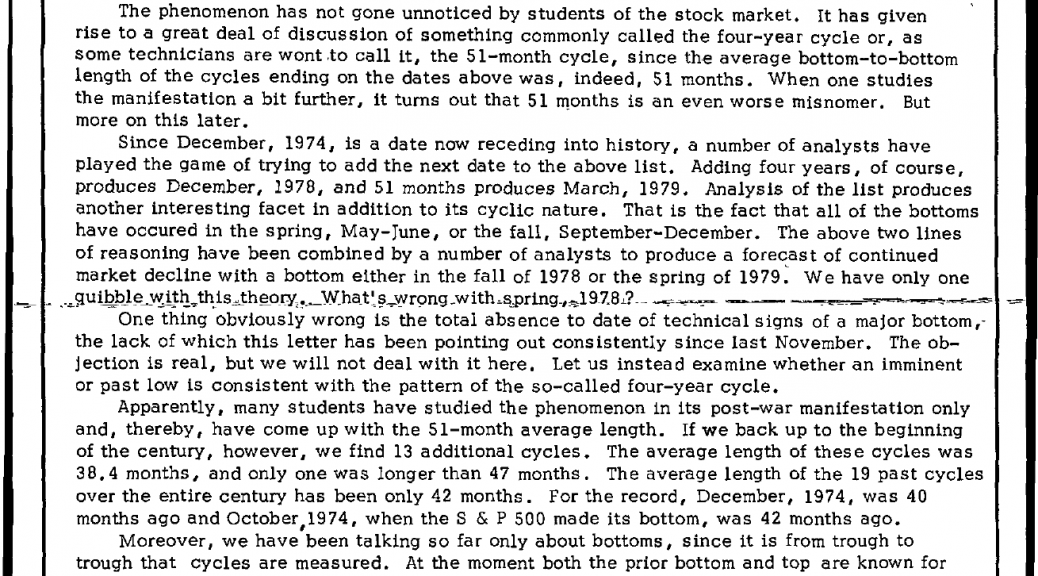 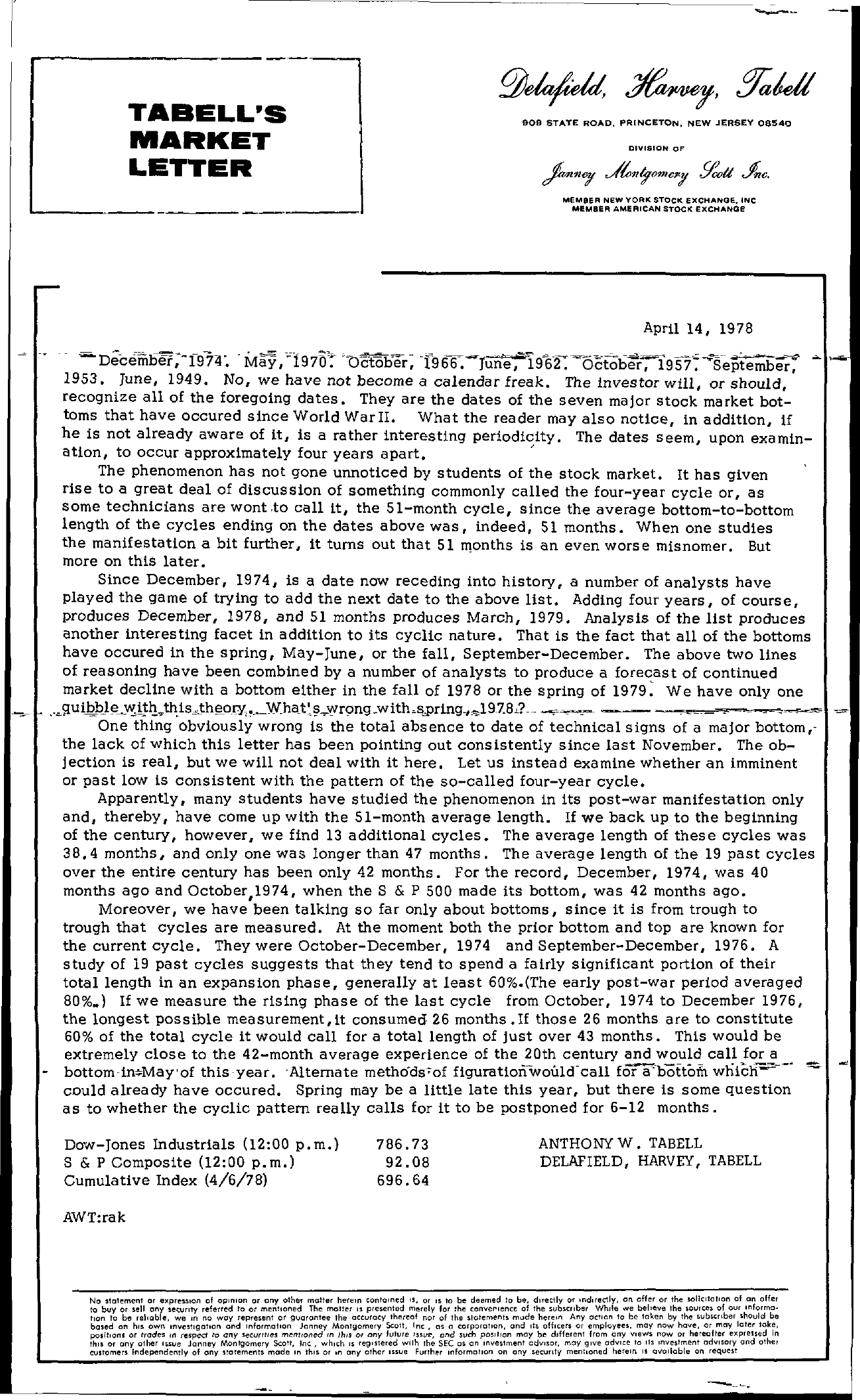 TABELL'S MARKET LETTER —– 909 STATE ROAD, PRINCETON, NEW JERSEY 08540 DIVISION OF MEMBER NEW YORK STOCI( eXCHANGE, INC MEMBER AMERICAN STOCK EXCHANGe April 14, 1978 – Decemb't;-f972r. May,1970 Uctober; -1966.-rulle;-1962. OctobFr, 1953. June, 1949. No, we have not become a calendar freak. The investor will, or should, recognize all of the foregOing dates. They are the dates of the seven major stock market bot- toms that have occured since World War II. What the reader may also notice, in addition, if he is not already aware of it, is a rather interesting periodi;ity. The dates seem, upon examin- ation, to occur approximately four years apart. The phenomenon has not gone unnoticed by students of the stock market. It has given rise to a great deal of discussion of something commonly called the four-year cycle or, as Some techniCians are wont .to call it, the 51-month cycle, since the average bottom-to-bottom length of the cycles ending on the dates above was, indeed, 51 months. When one studies the manifestation a bit further, it turns out that 51 months is an even worse misnomer. But more on this later. Since December, 1974, is a date now receding into history, a number of analysts have played the game of trying to add the next date to the above list. Adding four years, of course, produces December, 1978, and 51 months produces March, 1979. Analysis of the list produces another interesting facet in addition to its cyclic nature. That is the fact that all of the bottoms have occured in the spring, May-June, or the fall, September-December. The above two lines of reasoning have been combined by a number of analysts to produce a forecast of continued market decline with a bottom either in the fall of 1978 or the spring of 1979 We have only one , One thing obviously wrong is the total absence to date of technical signs of a major bottom,- the lack of which this letter has been pointing out consistently since last November. The ob- jection is real, but we will not deal with it here. Let us instead examine whether an imminent or past low is consistent with the pattern of the so-called four-year cycle. Apparently, many students have studied the phenomenon in its post-war manifestation only and, thereby, have come up with the 51-month average length. If we back up to the beginning of the century, however, we find 13 additional cycles. The average length of thes e cycles was 38.4 months, and only one was longer than 47 months. The average length of the 19 past cycles over the entire century has been only 42 months. For the record, December, 1974, was 40 months ago and October,1974, when the S & p 500 made its bottom, was 42 months ago. Moreover, we have been talking so far only about bottoms, since it is from trough to trough that cycles are measured. At the moment both the prior bottom and top are known for the current cycle. They were October-December, 1974 and September-December, 1976. A study of 19 past cycles suggests that they tend to spend a fairly Significant portion of their total length in an expansion phase, generally at least 60.(The early post-war period averaged 80.) If we measure the rising phase of the last cycle from October, 1974 to December 1976, the longest Possible measurement, it consumed 26 months. If those 26 months are to constitute 60 of the total cycle it would call for a total length of just over 43 months. This would be extremely close to the 42-month average experience of the 20th century and would call for a – bottom-inMaY'of this year. figurati0l1-would-call fora-bottom – could already have occured. Spring may be a little late this year, but there is some question as to whether the cyclic pattern really calls for it to be postponed for 6-12 months. DCYN-Jones Industrials (1200 p.m.) S & P Composite (1200 p. m.) Cumulative Index (4/6/78) 786.73 92.08 696.64 ANTHONY W. TABELL DELAFIELD, HARVEY, TABELL AWTrak No ,talement or expreSSIon of op'nion or any other matter hereIn tontomed IS, or n to be deemed 10 be, directly or mdHec1ly, on offer or the sollelfaltan of on offer to buy or sell any security referred to or mentIOned The matter IS presented merely for the convellenee of the slibscriber While we the sOlirees of our Informo. tlon to be reliable, we In no way represent or guarantee the accuracy thereof nor of the statements mude herein Any action to be taken by the subSCriber should be based on hiS own investigation and Informallon Janney Montgomery Scott, Inc, as a corporation, and Ih officers or employees, may now have, or may later take, positions or trades lit respect to any securities mentioned In HilS or Dny future lSue, Dnd such posilion may be different from any views now or hereafter expressed In thiS or ony other Issue Janney Montgomery Scott, Inc, which IS registered wllh the SEC as an Investment adVisor, may give adVice to ItS IfIvestment adVisory and othel customers Independently of any statements mode In thiS or In any other ISsue Further IItformatlon on any security menhoned herein 1 ovolleble on request – -.