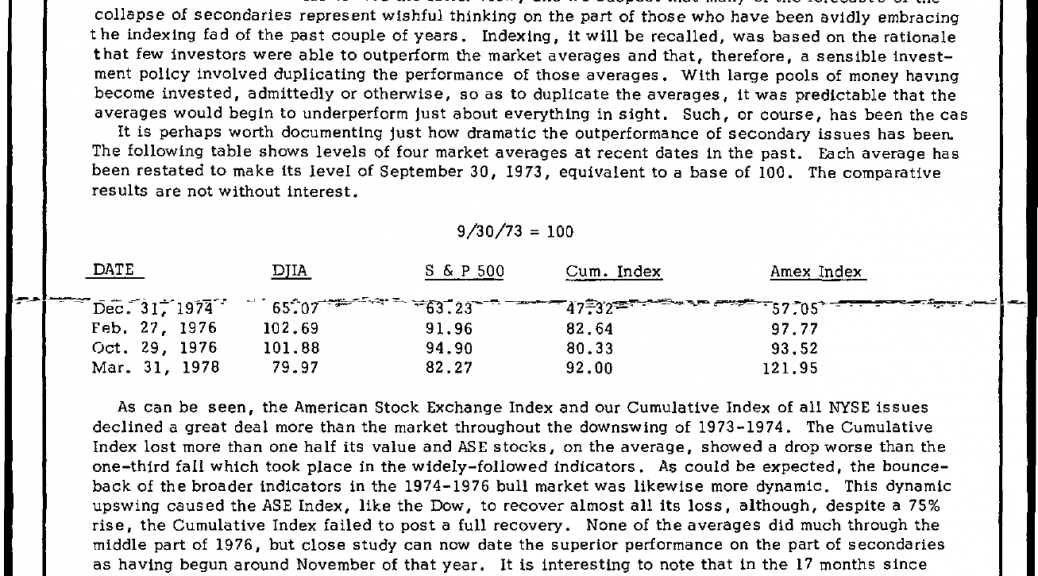 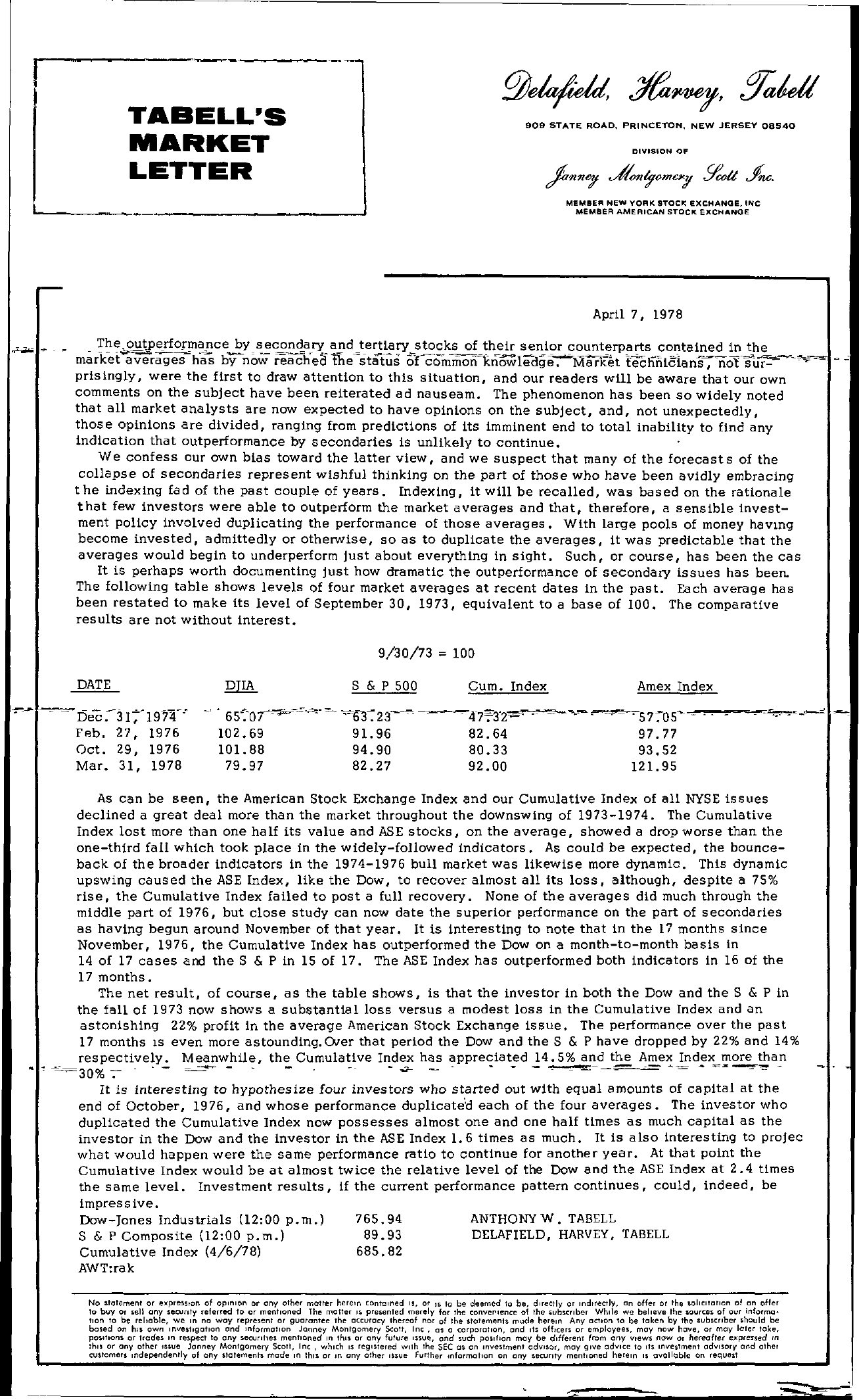 .——–'——'– TABELL'S MARKET LETTER 909 STATE ROAD, PRINCETON, NEW JERSEY 08540 DIVISION OF MEMBER NEW YORK STOC' EXCHANGE. INC MEMBER AMERICAN STOCK eXCHANGE April 7, 1978 or. .sto;ks oftheir senlorcounterparts contained In the market averages has by now reached the status common)(nOwleoge-tlira-rJCet prlslngly, were the first to draw attention to this situation, and our readers will be aware that our own comments on the subject have been reiterated ad nauseam. The phenomenon has been so widely noted that all market analysts are now expected to have opinions on the subject, and, not unexpectedly, thos e opinions are divided, ranging from predictions of Its Imminent end to total Inability to find any indication that outperformance by secondaries Is unlikely to continue. We confess our own bias toward the latter view, and we suspect that many of the forecasts of the collapse of secondaries represent wishful thinking on the part of those who have been avidly embracing t he indexing fad of the past couple of years. Indexing, it will be recalled, was based on the rationale that few investors were able to outperform the market averages and that, therefore, a sensible investment policy Involved duplicating the performance of those averages. With large pools of money havmg become invested, admittedly or otherwise, so as to duplicate the averages, it was predictable that the averages would begin to underperform just about everything in sight. Such, or course, has been the cas It is perhaps worth documenting just how dramatic the outperformance of secondary issues has been. The following table shows levels of four market averages at recent dates in the past. Each average has been restated to make its level of September 30, 1973, equivalent to a base of 100. The comparative results are not without interest. 9/30/73 100 DATE Feb. 27, 1976 Oct. 29, 1976 Mar. 31, 1978 DJIA .' 10 2.69 101.88 79.97 S & P 500 91. 96 94.90 82.27 Cum. Index 82.64 80.33 92.00 Amex Index ,,, 97.77 93.52 121.95 As can be seen, the American Stock Exchange Index and our Cumulative Index of all NYSE issues declined a great deal more than the market throughout the downswing of 1973-1974. The Cumulative Index lost more than one half its value and ASE stocks, on the average, showed a drop worse than the one-third fall which took place in the widely-followed indicators. As could be expected, the bounce- back of the broader indicators in the 1974-1976 bull market was likewise more dynamiC. This dynamiC upswing caused the ASE Index, like the Dow, to recover almost all its loss, although, despite a 75 rise, the Cumulative Index failed to post a full recovery. None of the averages did much through the middle part of 1976, but close study can now date the superior performance on the part of secondaries as having begun around November of that year. It is Interesting to note that In the 17 months since November, 1976, the Cumulative Index has outperformed the Dow on a month-to-month basis in 14 of 17 cases and the S & P In 15 of 17. The ASE Index has outperformed both Indicators In 16 of the 17 months. The net result, of course, as the table shows, is that the Investor In both the Dow and the S & P In the fall of 1973 now shows a substantial loss versus a modest loss In the Cumulative Index and an astonishing 22 profit In the average American Stock Exchange Issue. The performance over the past . . 17 months IS even more astounding. OIer that period the Dow and the S & P have dropped by 22 and 14 respectively. Meanwhile, the Cumulative Index has appreciated 14.5 and the Amex Index more than -;- – -'-.- – – – . , ' —- – – – – – – It is interesting to hypothesize four investors who started out with equal amounts of capital at the end of October, 1976, and whose performance duplicate'd each of the four averages. The investor who duplicated the Cumulative Index now possesses almost one and one half times as much capital as the investor in the Dow and the investor in the ASE Index 1. 6 times as much. It is also interesting to projec what would happen were the same performance ratio to continue for another year. At that point the Cumulative Index would be at almost twice the relative level of the Dow and the ASE Index at 2.4 times the same level. Investment results, if the current performance pattern continues, could, indeed, be impressive. Dcw-Jones Industrials (12 00 p. m.) S & P Composite (1200 p. m.) Cumulative Index (4/6/78) AWTrak 765.94 89.93 685.82 ANTHONY W TABELL DELAFIELD, HARVEY, TABELL No stotement or expressIOn of opinion or any other moiler herem contomed IS, or IS 10 be deemed to be, directly or indirectly, on offer or the 50licllollon of on offer 10 buy or sell ony securlly relerred 10 or menlloned The molter presenled merely for Ihe converlence of the subSCriber While we believe the sources of our Informa- tion 10 be reliable, we In no way or guoronlee The accuracy thereof nor 01 the stalements mode herem Any actIOn to be token by the subscriber should be based on hl5 own mvestlgotlon and information Jonney Montgomery SCali, Inc, as a corporal lon, and Its officers or employees, may now have, or moy loter toke, pOSlhons or trades In respect 10 any secuflhes menhoned In Ihls or any future Issue, and such position may be different from any views now or hereafter expressed In IflIS or any other Issve Janney Montgomery Scott, Inc, which IS regiStered With the SEC os on InveSlmenl adVisor, may give adVice 10 Its Inveslment adVisory and othel tUstomers mdependenlly 01 any stetements mode m thiS or In ony other Issve further mlormatlon on ony setUnly menlloned herein IS evolloble on request ——-