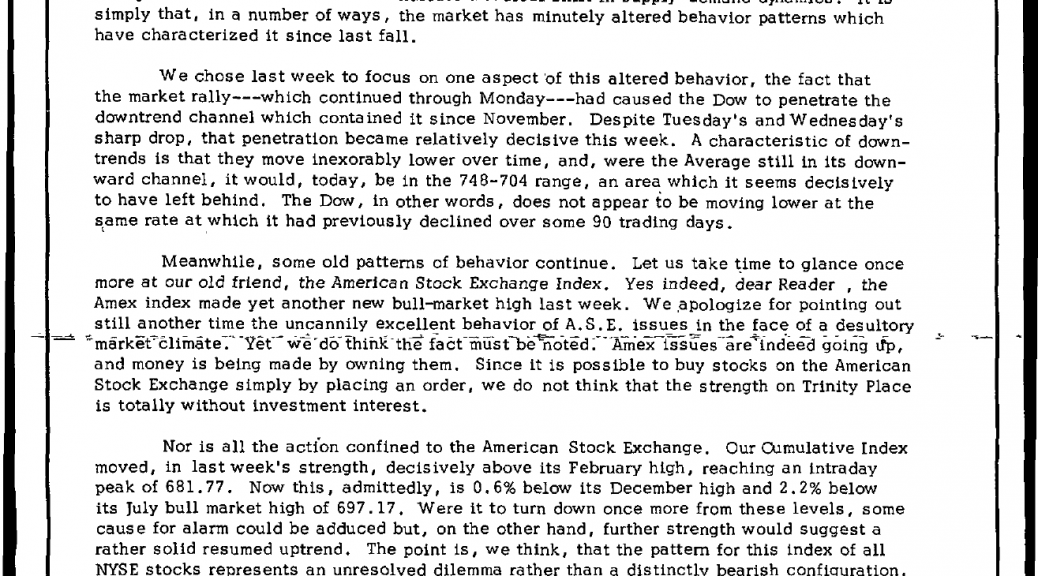 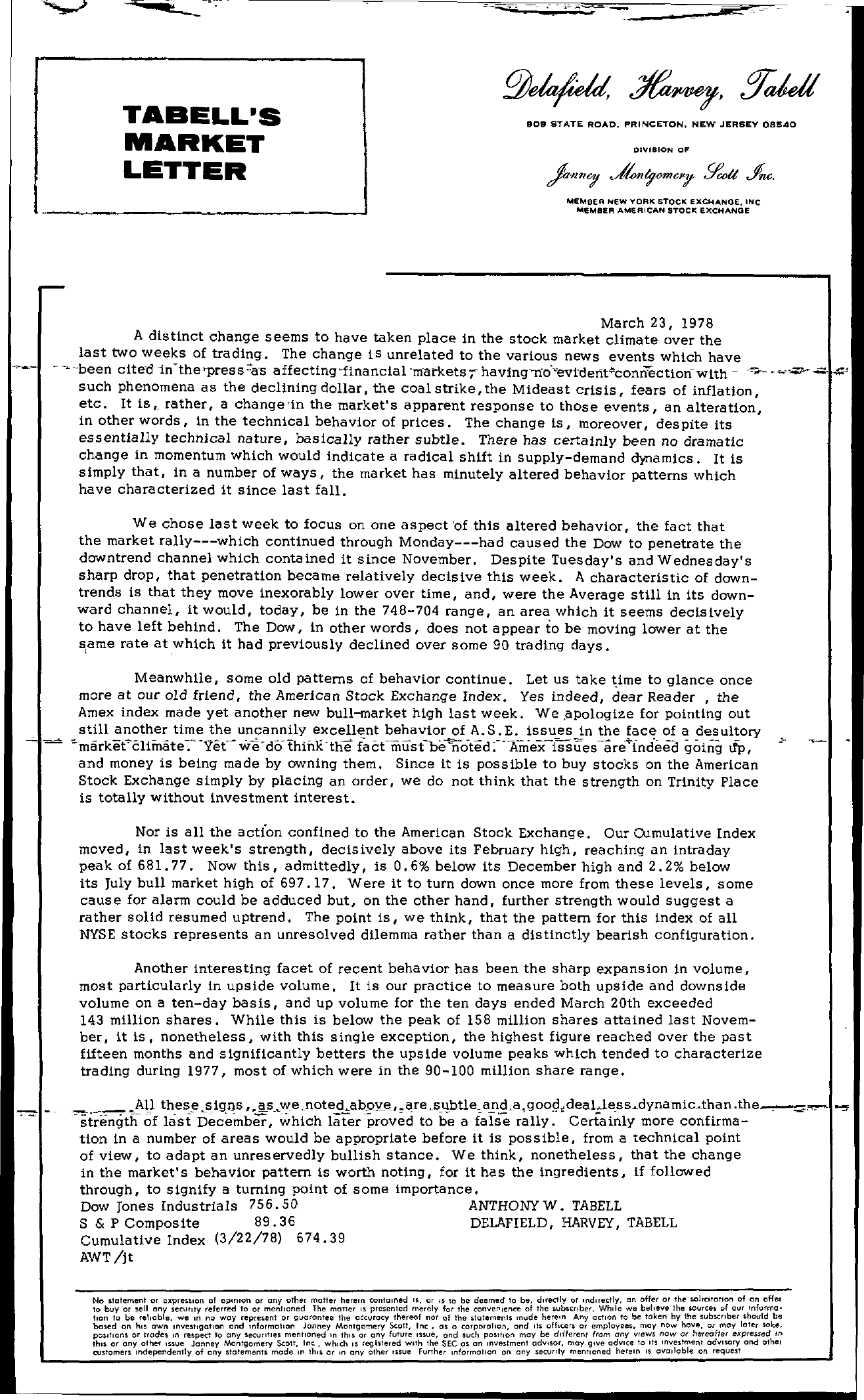 TABELL'S MARKET LETTER 909 STATE ROAD, PRINCETON. NEW JERSEY 08540 DIVISION OF MEMBER New VORK STOCK EXCHANGE, INC MEMBER AMERICAN STOCK eXCHANGE March 23, 1978 A distinct change seems to have taken place in the stock market climate over the last two weeks of trading. The change is unrelated to the various news events which have – -. –been cite-d -inthe 'press a ffectingfinanc1al -markets;- with such phenomena as the declining dollar. the coal strike, the Mideast crisis, fears of inflation, etc. It is,. rather, a change'in the market's apparent response to those events, an alteration, in other words, in the technical behavior of prices. The change is, moreover, des pite its essentially technical nature, basically rather subtle. There has certainly been no dramatic change in momentum which would indicate a radical shift in supply-demand dynamics. It is simply that. in a number of ways. the market has minutely altered behavior patterns which have characterized it since last fall. We chose last week to focus on one aspect 'of this altered behavior, the fact that the market rally—which continued through Monday—had caused the Dow to penetrate the downtrend channel which contained it since November. Despite Tuesday's and Wednesday's sharp drop. that penetration became relatively decisive this week. A characteristic of down- trends is that they move inexorably lower over time, and, were the Average still in its down- ward channel, it would, today, be in the 748-704 range, an area which it seems decisively to have left behind. The Dow, in other words, does not appear to be moving lower at the s,ame rate at which , it had previously declined over some 90 trading days. Meanwhile, some old patterns of behavior continue. Let us take to glance once more at our old friend, the American Stock Exchange Index. Yes indeed, dear Reader, the Amex index made yet another new bull-market high last week. We .apologize for pointing out w-estill another time the uncannily excellent behavior of A. S. E. issues in the face of a desultory ''lee 'do think the fact-musCbeboted going tfP. and money is being made by owning them. Since it is possible to buy stocks on the American Stock Exchange Simply by placing an order. we do not think that the strength on Trinity Place is totally without investment interest. Nor is all the action confined to the American Stock Exchange. Our Olmulative Index moved, in last week's strength, decisively above its February high, reaching an intraday peak of 681.77. Now this, admittedly, is 0.6 below its December high and 2.2 below its July bull market high of 697.17. Were it to turn down once more from these levels. some cause for alarm could be adduced but, on the other hand, further strength would suggest a rather solid resumed uptrend. The point is, we think, that the pattern for this index of all NYSE stocks represents an unresolved dilemma rather than a distinctly bearish configuration. Another interesting facet of recent behavior has been the sharp expansion in volume, most particularly in upside volume. It is our practice to measure both upside and downside volume on a ten-day baSiS, and up volume for the ten days ended March 20th exceeded 143 million shares. While this is below the peak of 158 million shares attained last November. it is. nonetheless, with this single exception, the highest figure reached over the past fifteen months and significantly betters the upside volume peaks which tended to characterize trading during 1977, most of which were in the 90-100 million share range. All these s igl)s ,. lswe are subtle and .a, go09, th'e of last December, which later proved to be a false rally. Certainly more confirma- tion in a number of areas would be appropriate before it is possible. from a technical point of view, to adapt an unreservedly bullish stance. We think, nonetheless, that the change in the market's behavior pattern is worth noting, for it has the ingredients, if followed through, to signify a turning point of some importance. Dow Tones Industrials 756.50 ANTHONY W. TABELL S & P Composite 89.36 DELAFIELD, HARVEY. TABELL Cumulative Index (3/22/78) 674.39 AWT /It No totemen! or expreSlon of op,nion or any other matter herein contained 'S, or IS 10 be deemed 10 be, directly or 'ndlTectly, on offer or the s.olrc.lotlon of an offer to buy or sell anr. secunty referred 10 or mentioned The matter IS presented merely for the of the subsCriber. While 'I'Ie believe the sources of our Informa- han to be rellob e, we In no way represent or guorantee the accuracy thereof nor of the stotements mude herem Any action to be taken by the subscriber should be based on hiS own tnVeshgatlon and mformahon Janney Montgomery Scoll, Inc, os a corporation, and Its off.cers or employees, may now have, or may later toke, positions or trades In respect to any seCUrities mentioned In thiS or any future Issue, C1nd such pOSHIOn may be different from any views (lOW O( hereafter expressed In or any other Issue Janney Montgomery Scolt, Inc, which IS reghtered With the SEC as an Investment adVisor, may gIVe adVice to Its Investment adVISOry and other customers Independently of any statements mode In thl or In ony other Issue Further infOrmation on any secvnty mentioned herein IS ,wodable on request