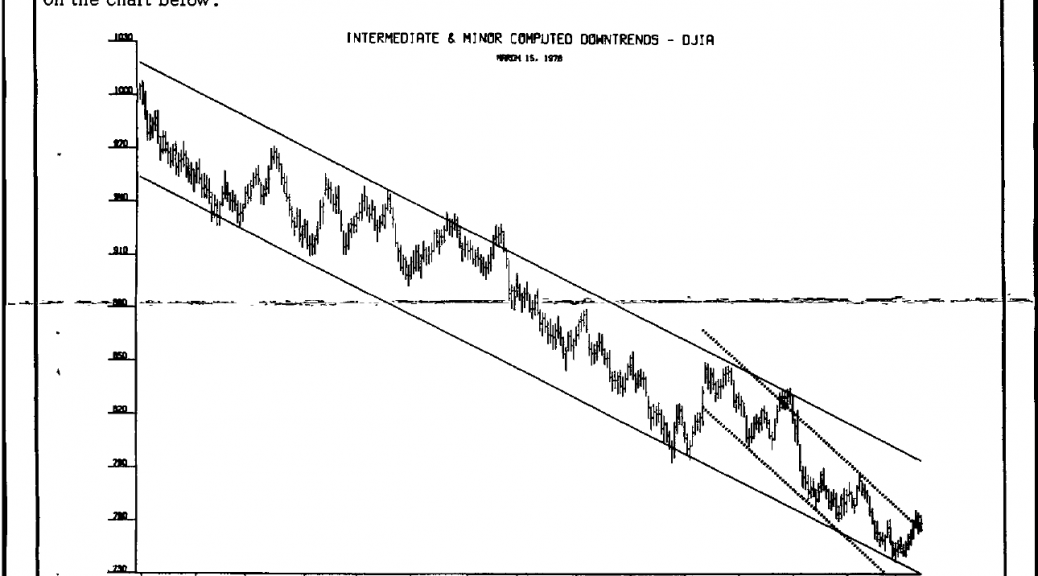 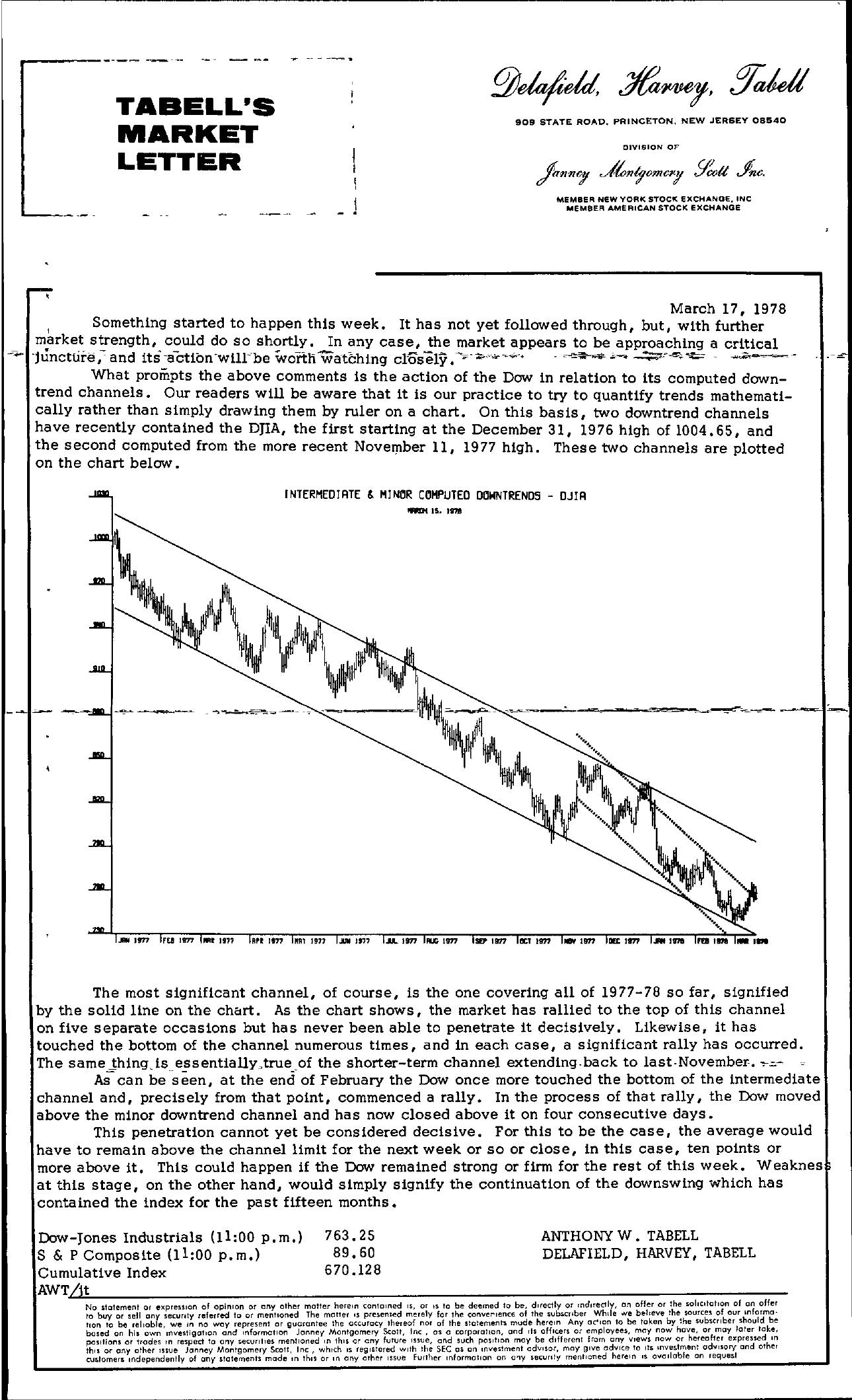 .——– — TABELL'S MARKET LETTER 909 STATE ROAD, PRINCETON, NEW JERSEY 08540 DIVISION OF MEMBER NEW YORK STOCK EXCHANGE, INC MEMBER AMERICAN STOCK EXCHANGE March 17, 1978 , Something started to happen this week. It has not yet followed through, but, with further market strength, could do so shortly. In any case, the market appears to be approaching a critical its-actibn-wlllbewortI1Watching – ;'—– – –'– What prompts the above comments Is the action of the Dow In relation to Its computed down- trend channels. Our readers will be aware that It is our practice to try to quantify trends mathemati- cally rather than Simply drawing them by ruler on a chart. On this basis, two downtrend channels have recently contained the DJIA, the first starting at the December 31, 1976 high of 1004.65, and the second computed from the more recent November 11, 1977 high. These two channels are plotted on the chart below INTERMEDIATE &MINOR COMPUTED DOWNTRENDS – DJIA – IS. 197B .-r- .AI 1m Ft!J 1977 IIAt 19 Apt 1'77 1t1I1 1977 .!UN Jtn ..1L 1977 IIJG 1977 SEr' 1977 IICT 1977 ICW' 1977 The most significant channel, of course, Is the one covering all of 1977-78 so far, signified by the solid line on the chart. As the chart shows, the market has rallied to the top of this channel on five separate occasions but has never been able to penetrate it decisively. Likewise, it has touched the bottom of the channel numerous times, and In each case, a significant rally has occurred. The same of the shorter-term channel extending-back to last-NovembeI'. As can be seen, at the end of February the Dow once more touched the bottom of the intermediate channel and, precisely from that pOint, commenced a rally. In the process of that rally, the Dow moved above the minor downtrend channel and has now closed above it on four consecutive days. This penetration cannot yet be considered decisive. For this to be the case, the average would have to remain above the channel limit for the next week or so or close, in this case, ten points or more above it. This could happen if the Dow remained strong or firm for the rest of this week. Weaknes at this stage, on the other hand, would simply signify the continuation of the downswing which has contained the index for the past fifteen months. Dow-Jones Industrials (1100 p.m.) 763.25 ANTHONY W TABELL S & P Composite (1100 p.m.) 89.60 DELAFIELD, HARVEY, TABELL Cumulative Index 670.128 No statement or expression of opinion or ony olher motter herein COnlolned IS, or IS 10 be deemed 10 be, dlrcctly or indirectly, on offer or the SOirCltatlon of on offer to buy or sell any security referred to or mentioned The molTer IS presenled merely for The converlenc!; of the subscnber While Ne believe the sources of our Informa- lion to be reliable, we In no woy represenl or guarantee Ihe occurocy thereof nor of Ihe slatements mude herCIn Any oc'lon to be token by Ihe subscriber should be bosed on hi, own Invesllgollon and Information Janney Montgomery Scali, Inc, os a corporation, and tis officers or employees, may now have, or may loter toke, posltfons or trades In respect to any mentioned In thiS or any future Issue, and such position may be different from any views now or hereafter expressed In Ihl5 or any other Issue Jonney Montgomery Scott, Inc, which IS registered with Ihe SEC os on II'Ivestment adVisor, may give advue to Its II'Ivestment adVISOry and othel customers Independently of any statements mode In thiS or In any OTher Issue Further Information on oy setvnly mentioned herein IS available on request