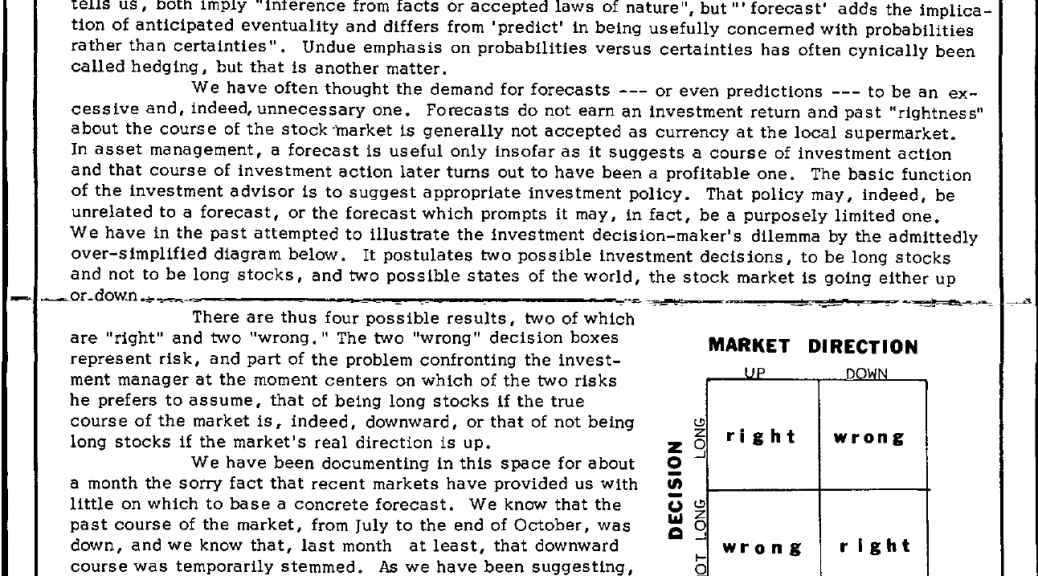 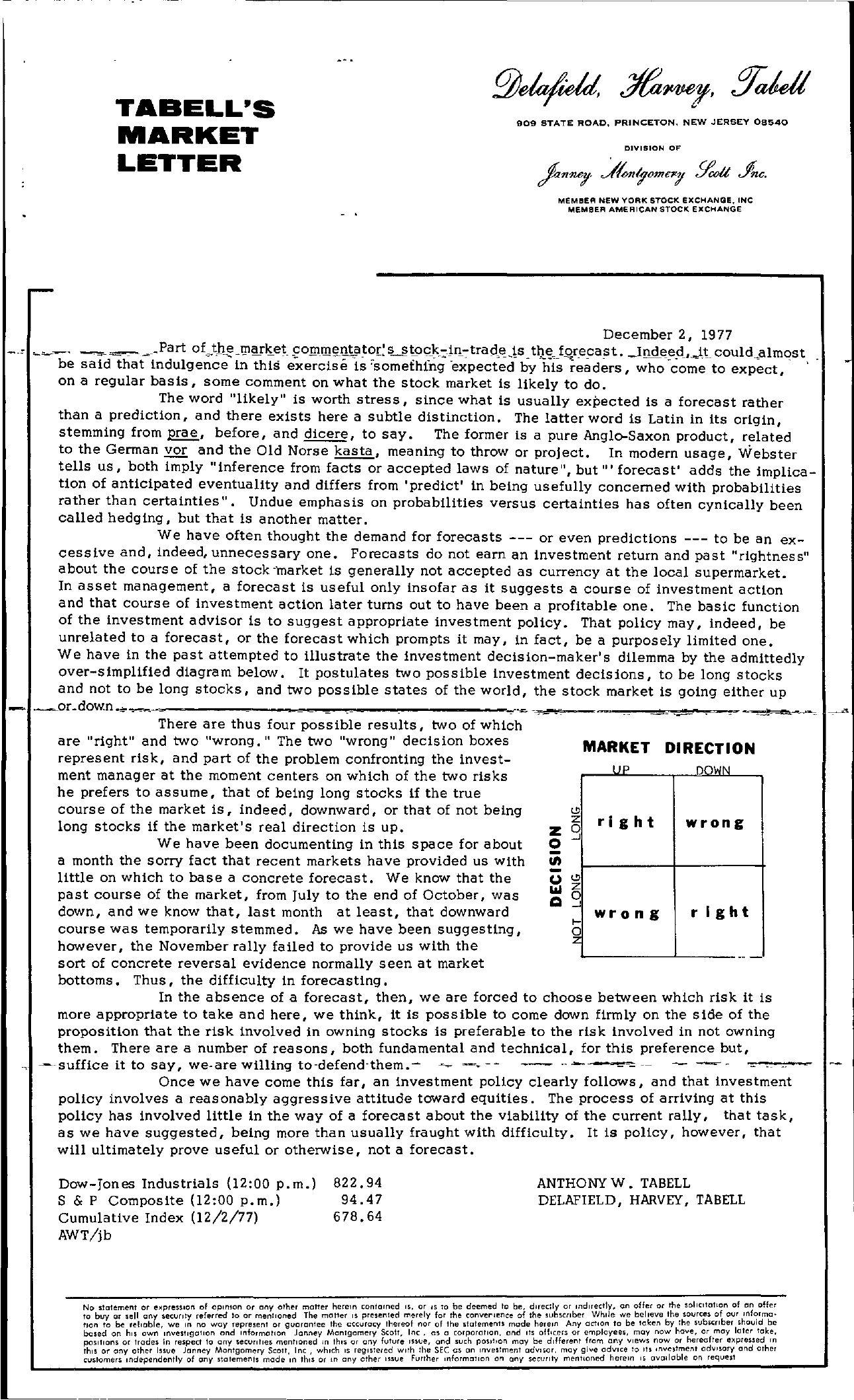 TABELL'S MARKET LETTER 909 STATE ROAD, PRINCETON. NEW JERSEY 08540 DIVtSION OF MEM8EA NEW YORK STOCK EXCHANGE, tNC MEMaER AMERICAN STOCK EXCHANGE December 2, 1977 Is–!' -. -. .. Part of,.tpe lIlillket. pO!!Irnntato utockJll-trad.ejs tl)e fQrecast. Indeed,it. couldalmost be said that indulgence- in this exercise 'somethfng 'e';pect'ed byh!S llders, who 'come to expct,' . on a regular basis, some comment on what the stock market is likely to do. The word likely is worth stress, since what is usually expected is a forecast rather than a prediction, and there exists here a subtle distinction. The latter word is Latin in its origin, stemming from prae, before, and dicere, to say. The former is a pure Anglo-Saxon product, related to the German Y! and the Old Norse kasta, meaning to throw or project. In modern usage, Webster tells us, both imply inference from facts or accepted laws of nature, but ' forecast' adds the implica- tion of anticipated eventuality and differs from 'predict' in being usefully concerned with probabilities rather than certainties. Undue emphasis on probabilities versus certainties has often cynically been called hedging, but that is another matter. We have often thought the demand for forecasts — or even predictions — to be an ex- cessive and, indeed, unnecessary one. Forecasts do not earn an investment return and past rightness about the course of the stock 'market is generally not accepted as currency at the local supermarket. In asset management, a forecast is useful only insofar as it suggests a course of investment action and that course of investment action later turns out to have been a profitable one. The baSic function of the investment advisor is to suggest appropriate investment policy. That policy may, indeed, be unrelated to a forecast, or the forecast which prompts it may, in fact, be a purposely limited one. We have in the past attempted to illustrate the investment decision-maker's dilemma by the admittedly over-simplified diagram below. It postulates two possible investment decisions, to be long stocks and not to belongstocks, andtwopossiblestatesoftheworld, the stock market is going either up or.down.. There are thus four possible results, two of which are right and two wrong. II The two wrong decision boxes represent risk, and part of the problem confronting the investment manager at the moment centers on which of the two risks MARKET DIRECTION tlP DnWN he prefers to assume, that of being long stocks if the true course of the market is, indeed, downward, or that of not being long stocks if the market's real direction is up. We have been documenting in this space for about a month the sorry fact that recent markets have provided us with little on which to base a concrete forecast. We know that the past course of the market, from July to the end of October, was down, and we know that, last month at least, that downward course was temporarily stemmed. As we have been suggesting, however, the November rally failed to provide us with the zg'z- rig h t wrong o -III -U'- III iCI oZ– wro n g rig h t !- L – …..L. sort of concrete reversal evidence normally seen at market bottoms. Thus, the difficulty in forecasting. In the absence of a forecast, then, we are forced to choose between which risk it is more appropriate to take and here, we think, it is possible to come down firmly on the side of the proposition that the risk involved in owning stocks is preferable to the risk involved in not owning them. There are a number of reasons, both fundamental and technical, for this preference but, 'suffice it to say, we-are willing to-defendthem.- – – . – – – …..,…….- Once we have come this far, an investment policy clearly follows, and that investment policy involves a reasonably aggressive attitude toward equities. The process of arriving at this policy has involved little in the way of a forecast about the viability of the current rally, that task, as we have suggested, being more than usually fraught with difficulty. It is policy, however, that will ultimately prove useful or otherwise, not a forecast. Dow-Jones Industrials (1200 p.m.) S & P CompOSite (1200 p.m.) Cumulative Index (12/2/77) AWT/jb 822.94 94.47 678.64 ANTHONY W TABELL DELAFIELD, HARVEY, TABELL No stclement or e(preslon of opinion or any other matter herem contolned IS, or IS;O be deemed to be, dlfectly or indirectly, on offer or the sol,cllchen of on offer to bvy or sell any security referred 10 or mentioned The molter IS presented merely for the converllnce of the subSCriber While we believe the sourcbs ofbour hnflnI' lion to be relloble, we In no way represent or guarantee the accuroy thereof nor of the statemenTS mude herein Any actIOn 10 be to\.en by the su TI er S au t e based on hiS own mvestlgahon and Information Janney Montgomery Scali, In , as a corporation, and Its offICers or employees, may now hahe, or may later \.e, positions or trades In respect 10 any SeCIJrltics mentioned In thiS or ony future Issue, and suh position may be different from any views now or ercodfter expredse hm Ihls or any other Inuc Janney Montgomery Scali, Inc, which IS registered With the SEC 05 on Investment adVisor, may give adVice to Its Investment a Yisoryon at er customers Independently of ony statements mode in thiS or in any other Issue Further Information on any security men honed herein IS available on request