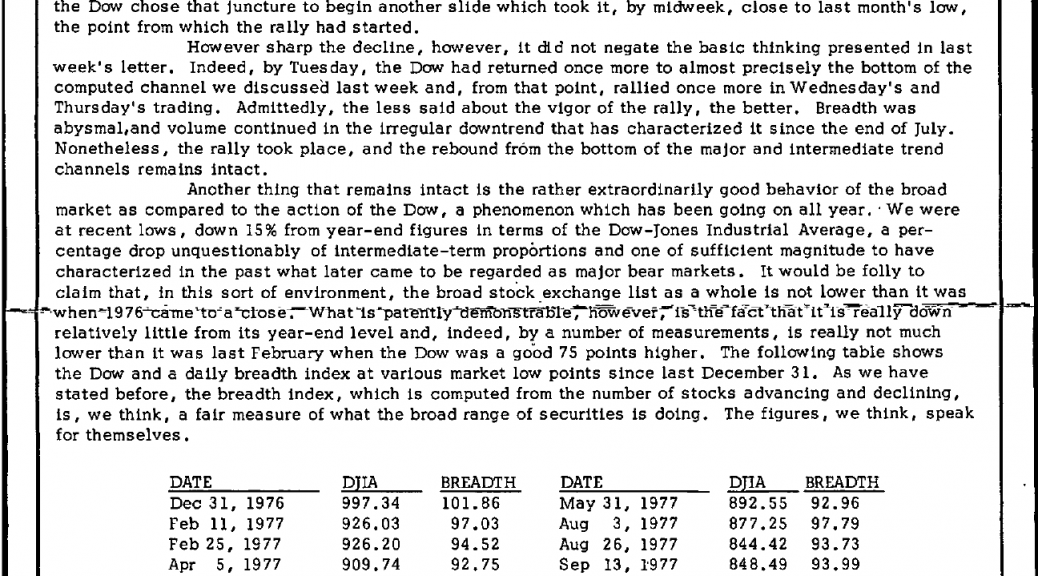 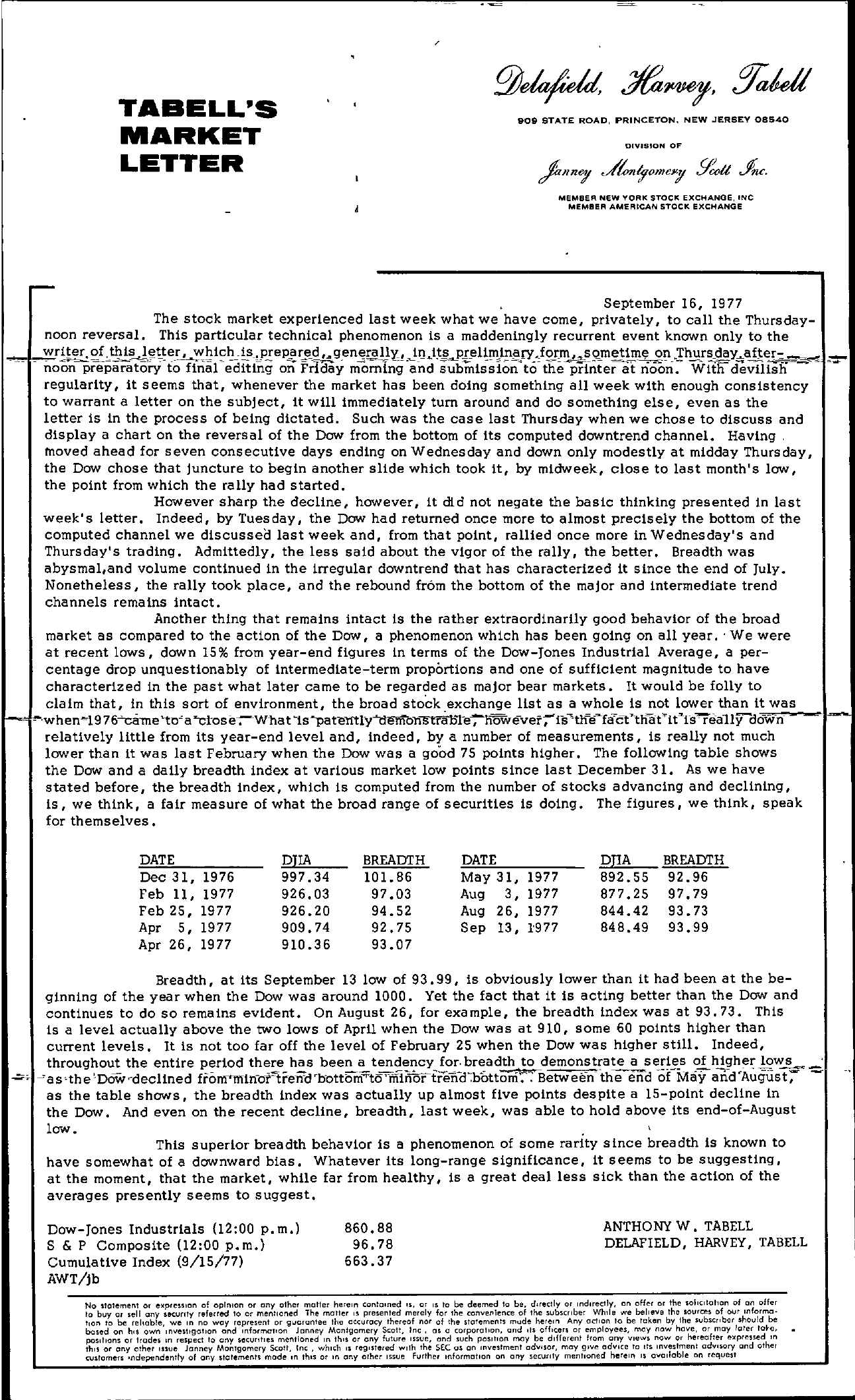 TABELL'S MARKET LETTER 909 STATE ROAD, PRINCETON. NEW JERSEY 08540 DIVISION OF MEMBER NEW VORK STOCK EXCHANGE, INC MEMBER AMERICAN STOCK EXCHANGE September 16, 1977 The stock market experienced last week what we have come, privately, to call the Thursdaynoon reversal. This particular technical phenomenon Is a maddeningly recurrent event known only to the ,,-,w;r.,J.WJt!er, !;I,,c ,Ple!l.fgen.!o, ,IIJkell!.lnlrylsmtme. ,n,!h!,dy…after- noon preparatory to final editing on Friday morning and submission to the printer at noon. With devilish regularity, it seems that, whenever the market has been doing something all week with enough consistency to warrant a letter on the subject, It will immediately tum around and do something else, even as the letter is in the process of being dictated. Such was the case last Thursday when we chose to discuss and display a chart on the reversal of the Dow from the bottom of Its computed downtrend channel. Having, moved ahead for seven consecutive days ending on Wednesday and down only modestly at midday Thursday, the Dow chose that juncture to begin another slide which took it, by midweek, close to last month's low, the point from which the rally had started. However sharp the decline, however, it did not negate the basic thinking presented in last week's letter. Indeed, by Tuesday, the Dow had returned once more to almost precisely the bottom of the computed channel we discussed last week and, from that pOint, rallied once more In Wednesday's and Thursday's trading. Admittedly, the less said about the vigor of the rally, the better. Breadth was abysmal,and volume continued in the irregular downtrend that has characterized it since the end of July. Nonetheless, the rally took place, and the rebound from the bottom of the major and intermediate trend channels remains intact. Another thing that remains intact is the rather extraordinarily good behavior of the broad market as compared to the action of the Dow, a phenomenon which has been going on all year .. We were at recent lows, down 15 from year-end figures in terms of the Dow-Jones Industrial Average, a percentage drop unquestionably of intermediate-term proportions and one of sufficient magnitude to have characterized in the past what later came to be regarded as major bear markets. It would be folly to claim that, in this sort of environment, the broad stock exchange list as a whole is not lower than it was –1-. . . f.-when-19 76came'toa 'c10s-.-What -ls..,at-emlyntrlil51e7nowever;-ls-tlfefacttnat'ltrs'7ea11ydo'w'-C'n'-' relatively little from its year-end level and, indeed, by a number of measurements, is really not much lower than It was last February when the Dow was a good 75 pOints higher. The following table shows the Dow and a dally breadth index at various market low pOints since last December 31. As we have stated before, the breadth Index, which is computed from the number of stocks advancing and declining, is, we think, a fair measure of what the broad range of securities is doing. The figures, we think, speak for themselves. DATE Dec 31, 1976 Feb 11, 1977 Feb 25, 1977 Apr 5, 1977 Apr 26, 1977 DIIA 997.34 926.03 926.20 909.74 910.36 BREADTH 101.86 97.03 94.52 92.75 93.07 DATE May 31, 1977 Aug 3, 1977 Aug 26, 1977 Sep 13, 1'977 D)1A 892.55 877.25 844.42 848.49 BREADTH 92.96 97.79 93.73 93.99 Breadth, at Its September 13 low of 93.99, Is obviously lower than It had been at the beginning of the year when the Dow was around 1000. Yet the fact that It Is acting better than the Dow and continues to do so remains evident. On August 26, for example, the breadth Index was at 93.73. This is a level actually above the two lows of April when the Dow was at 910, some 60 pOints higher than current levels. It is not too far off the level of February 25 when the Dow was higher still. Indeed, T throughout the entire period there has been a tendency for, breadth to demonstrate a seIs ll!gher low' asthe'D6Wcdecllned fromriin-orti'eid'bOttbm'ti5'nfinorfrel'-ilbottorri';' Betwee-n the end of May arid'August;-' as the table shows, the breadth Index was actually up almost five points despite a IS-point decline In the Dow. And even on the recent decline, breadth, last week, was able to hold above its end-of-August levi. \ This superior breadth behavior Is a phenomenon of some rarity since breadth Is known to have somewhat of a downward bias. Whatever its long-range significance, it seems to be suggesting, at the moment, that the market, while far from healthy, is a great deal less sick than the action of the averages presently seems to suggest. Dow-Jones Industrials (1200 p.m.) S & P Composite (1200 p. m.) Cumulative Index (9/15/77) AWT/jb 860.88 96.78 663.37 ANTHONY W. TABELL DELAFIELD, HARVEY, TABELL No stolemen! or eKprcsslon of opInion or any olht!( moHer herein c.ontOlned IS, or IS 10 be deemed to be, direClly or indirectly, an offer or the sol,cltohon of an offer to buy or sell any security referred to or mentioned The matter IS presented merely for the convenience of the subscriber Wh,le we believe the sovrces of our informa- tion to be reliable, we In no way represent or guarantee the accuracy thereof nor of the statements mude herein Any odlon to be token by the subscflbcr should be based on hiS own Invesllgotlon ond Informolton Jenney Montgomery Scoll, Inc, os 0 corporation, and Its offICers or employees, moy now have, or may loler loe, posllions or trades In resped to any seCUrities mentloned In i!-IIS or any future Issue, and such pOSition may be different from ony views now or hereafter expressed III thiS or ony other IUue Janney Montgomery Scott, Inc, whICh IS regiSTered With the SEC 05 on Investment adVisor, may give adVice to Its Investment odvlS.ory end othel customers .ndependently of any statements mode In th,s or In any olher Issue Further ,nformatlon on any security menhoned herem IS available an request