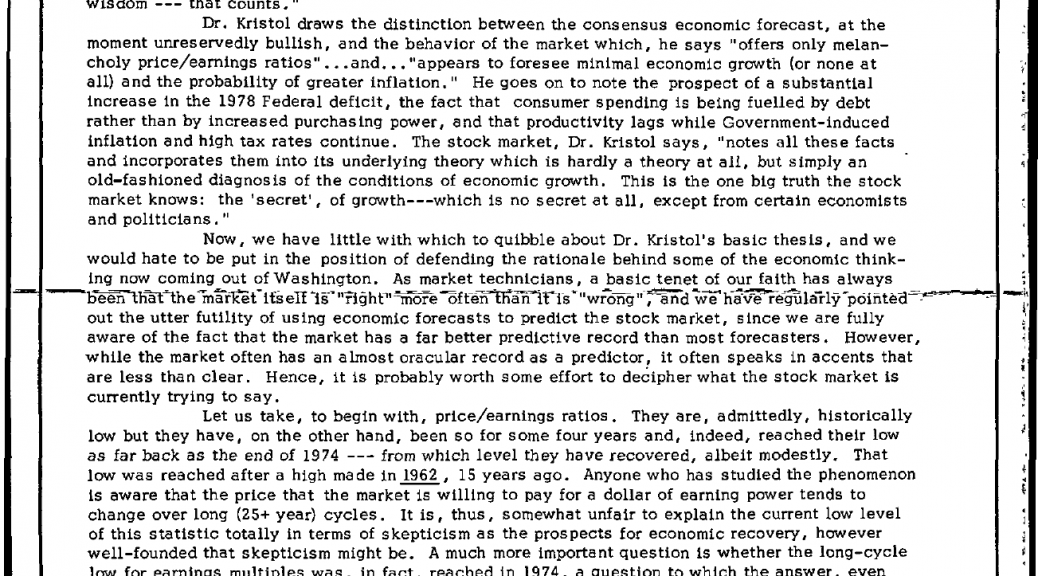 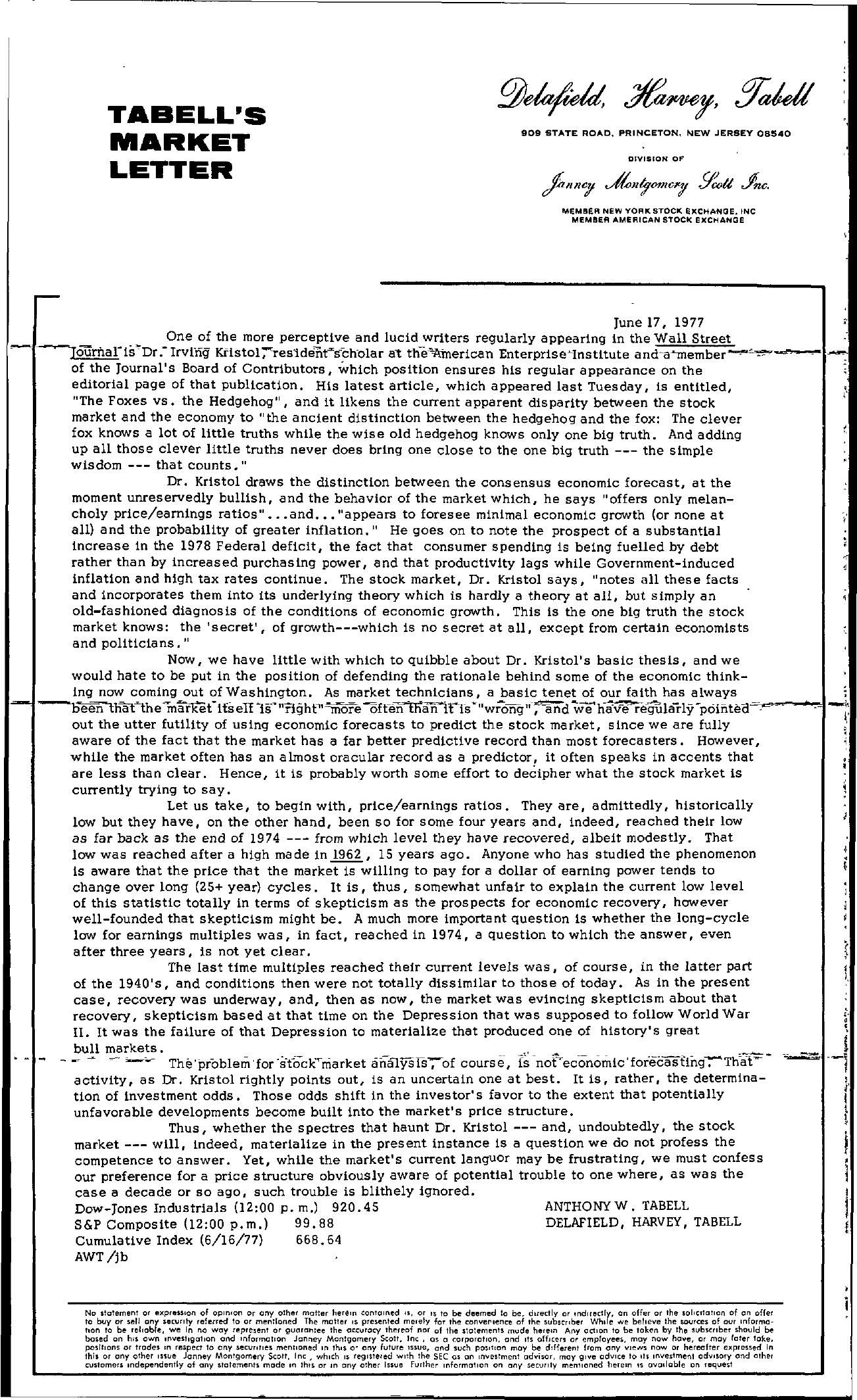 TABELL'S MARKET LETTER 909 STATE ROAD. PRINCETON, NEW JERSEY 08540 DIVISION OF MEMBER NEW VOAK STOCI( EXCHANGe, INC MEMBER AMERICAN STOel( EXCHANGE June 17, 1977 One of the more perceptive and lucid wrlters regularly appearing in the Wall Street – . 10urilarisDr.- Irvlng Ktistol;-'res1dents-cholar a1 ther'A-merican EnterpriseInstitute and a—member'— of the Journal's Board of Contributors, which position ensures his regular appearance on the editorial page of that publication. His latest article, which appeared last Tuesday, is entitled, The Foxes vs. the Hedgehog, and it likens the current apparent disparity between the stock market and the economy to the ancient distinction between the hedgehog and the fox The clever fox knows a lot of little truths whlle the wise old hedgehog knows only one big truth. And adding up all those clever little truths never does bring one close to the one big truth — the simple wisdom — that counts. Dr. Kristol draws the distinction between the consensus economic forecast, at the moment unreservedly bullish, and the behavior of the market which, he says offers only melan- choly price/earnings ratios … and .. appears to foresee minimal economic growth (or none at all) and the probability of greater inflation. He goes on to note the prospect of a substantial increase in the 1978 Federal defiCit, the fact that consumer spending is being fuelled by debt rather than by increased purchasing power, and that productivity lags whlle Government-induced ',- inflation and high tax rates continue. The stock market, Dr. Kristol says, notes all these facts and incorporates them into its underlying theory which is hardly a theory at all, but simply an old-fashioned diagnosis of the conditions of economic growth. This is the one big truth the stock market knows the 'secret', of growth—which is no secret at all, except from certain economists and politicians. Now, we have little with which to quibble about Dr. Kristol's basic thesis, and we would hate to be put in the position of defending the rationale behind some of the economic think- , ing now coming out of Washington. As market technicians, a basic tenet of our faith has always – I -oeen thanhematKefltseU'!s-'''r!ghe'-moreoftentfian1ns'''wrong'';'i!ndwehegtlarly-p6intea.—-.–.-.1 out the utter futility of using economic forecasts to predict the stock market, since we are fully ,I, aware of the fact that the market has a far better predictive record than most forecasters. However, ; while the market often has an almost oracular record as a predictor, it often speaks in accents that are less than clear. Hence, it is probably worth some effort to decipher what the stock market is currently trying to say. I I .- – Let us take, to begin with, price/earnings ratios. They are, admittedly, historically low but they have, on the other hand, been so for some four years and, indeed, reached their low as far back as the end of 1974 — from which level they have recovered, albeit modestly. That low was reached after a high made in 1962, 15 years ago. Anyone who has studied the phenomenon is aware that the price that the market is willing to pay for a dollar of earning power tends to change over long (25 year) cycles. It is, thus, somewhat unfair to explain the current low level of this statistic totally in terms of skepticism as the prospects for economic recovery, however well-founded that skepticism might be. A much more important question is whether the long-cycle low for earnings multiples was, in fact, reached in 1974, a question to which the answer, even after three years, is not yet clear. The last time multiples reached their current levels was, of course, in the latter part of the 1940's, and conditions then were not totally disSimilar to those of today. As in the present case, recovery was underway, and, then as now, the market was evincing skepticism about that recovery, skepticism based at that time on the Depression that was supposed to follow World War II. It was the failure of that Depression to materialize that produced one of history's great bull markets. .,' . . – '—– The'problem'for-sTockniarket anilIYSls';'of course, s -noteconomic'foieiastlng7'Th-at I , i I ,i r I j ,,,. ! j activity, as Dr. Kristol rightly pOints out, is an uncertain one at best. It is, rather, the determina- tion of investment odds. Those odds shift in the investor's favor to the extent that potentially unfavorable developments become bullt into the market's price structure. Thus, whether the spectres that haunt Dr. Kristo1 — and, undoubtedly, the stock market — wlll, indeed, materialize in the present instance is a question we do not profess the competence to answer. Yet, while the market's current languor may be frustrating, we must confess our preference for a price structure obviously aware of potential trouble to one where, as was the case a decade or so ago, such trouble is blithely ignored. Dow-Jones Industrials (1200 p. m.) 920.45 ANTHONYW. TABELL S&P CompOSite (1200 p.m.) 99.88 DELAFIELD, HARVEY, TABELL Cumulative Index (6/16/77) 668.64 I I i 1 1 I ! j AWT /jb No statement or expressIon of opinIon or any alher matter herem contolned IS, or IS to be deemed 10 be, dIrectly or Indlrec1Ir.' on offer or the soliCitation of an offer to buy or selJ onr. security referred to or mentioned The matler IS presented merely for the convertenc;e of the subscriber Whl e e believe the Ources of our Informahon to be rehob e. we In no way represent or guarantee the occurocy thereof nor of the statements mude herein Any action to be token by Ihe subrlber should be based on hIS own If\veshgotlan and InformallOn Jenney Montgomery Scolt, Inc, as a corporation, and Its offIcers or employees, may now have, Or may rater tol.e, positions or trades In respect to ony secuntle, menltoned In thiS 0- any future Issue, and such POSitIon may be drfferent from any VleoNS now or hereafter expressed In this or any other luue Janney Montgomery Scolt, Inc. which IS registered With the SEC os on IfIveslmenl advisor, may give adVice to Its Ir\Vestment advnary and other C\Jstomen Independently of ony stalements mode In thts or In any other Issue further information on any secunty mentioned herein IS available on request