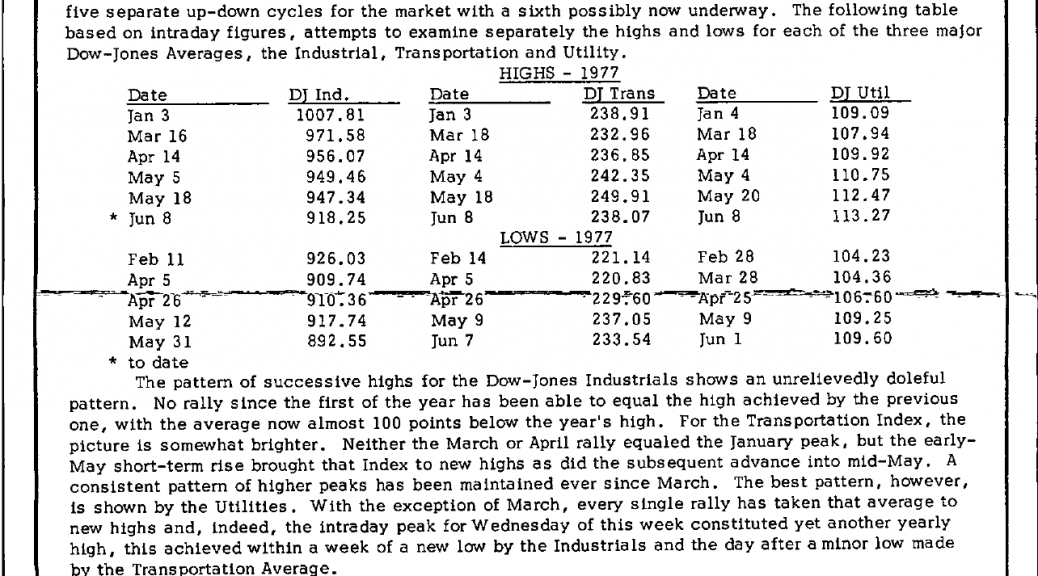 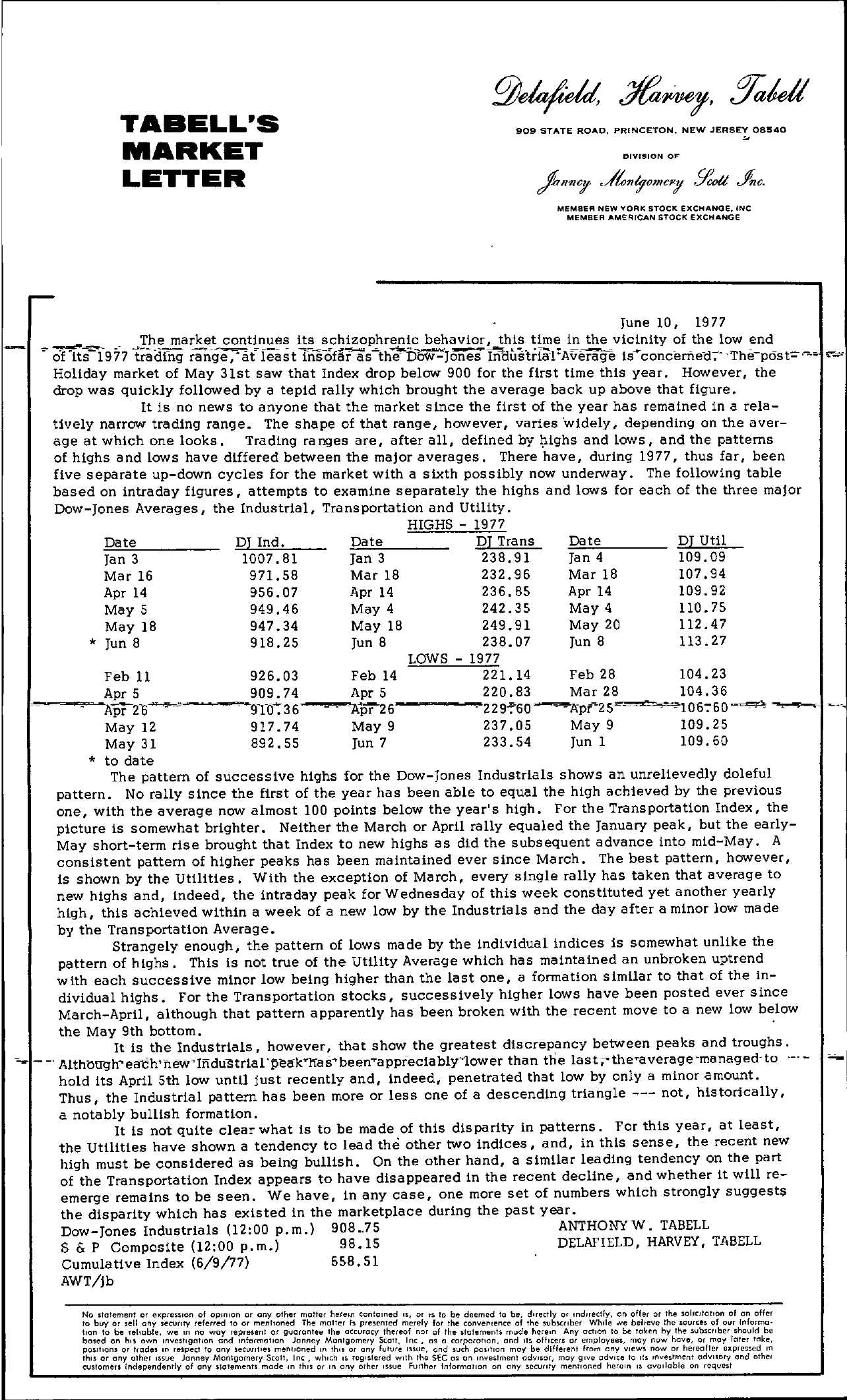 TABELL'S MARKET LETTER 909 STATE ROAD. PRINCETON. NEW JERSEY 08540 DIVISION OF MEMBER NEW VORK STOCK eXCHANoe. INC MEMBER AMERICAN STOCK eXCHANGE – June 10, 1977 , o-f-its19 77,Jt'r.ahd.e-i-nm.g-arrakne-tgeco,-nattinl–ue-ea- ss- t its schizoph –i.n—-s-o–far as-.t renic behavior, this time in the v he'Dow-J…..-t….-.-……. o-n-es-I-ndus..tr-i.a'l-A.. v-E!-r,ig'e icinity of the low end is-concerne'd;-'The, p6st'- Holiday market of May 31st saw that Index drop below 900 for the first time this year. However, the drop was quickly followed by a tepid rally which brought the average back up above that figure. It is no news to anyone that the market since the first of the year has remained in a rela- tively narrow trading range. The shape of that range, however, varies widely, depending on the aver- age at which one looks. Trading ranges are, after all, defined by J!ighs and lows, and the patterns of highs and lows have differed between the major averages. There have, during 1977, thus far, been five separate up-down cycles for the market with a sixth possibly now underway. The following table based on intra day figures, attempts to examine separately the highs and lows for each of the three major Dow-Jones Averages, the Industrial, Trans portation and Utility. HIGHS – 1977 The pattern of successive highs for the Dow-Jones Industrials shows an unrelievedly doleful pattern. No rally since the first of the year has been able to equal the high achieved by the previous one, with the average now almost 100 pOints below the year's high. For the Transportation Index, the picture is somewhat brighter. Neither the March or April rally equaled the January peak, but the early- May short-term rise brought that Index to new highs as did the subsequent advance into mid-May. A consistent pattern of higher peaks has been maintained ever since March. The best pattern, however, is shown by the Utilities. With the exception of March, every single rally has taken that average to new highs and, indeed, the intra day peak for Wednesday of this week constituted yet another yearly high, this achieved within a week of a new low by the Industrials and the day after a minor low made by the Trans portation Average. Strangely enough, the pattern of lows made by the indiVidual indices is somewhat unlike the pattern of highs. This is not true of the Utility Average which has maintained an unbroken uptrend with each successive minor low being higher than the last one, a formation similar to that of the in- dividual highs. For the Transportation stocks, successively higher lows have been posted ever since March-April, although that pattern apparently has been broken with the recent move to a new low below the May 9th bottom. It is the Industrials, however, that show the greatest discrepancy between peaks and troughs. — – -, Although'ea-ch'hew'IlIdustrial 'll'eak'nas'been-appreciablylower than the last,the'average'managed,to '-'- hold its April 5th low until just recently and, indeed, penetrated that low by only a minor amount. Thus, the Industrial pattern has been more or less one of a descending triangle — not, historically, a notably bullish formation. It is not quite clear what is to be made of this disparity in patterns. For this year, at least, the Utilities have shown a tendency to lead the other two indices, and, in this sense, the recent new high must be conSidered as being bullish. On the other hand, a similar leading tendency on the part of the Transportation Index appears to have disappeared in the recent decline, and whether it will reemerge remains to be seen. We have, in any case, one more set of numbers which strongly suggests the disparity which has existed in the marketplace during the past year. Dow-Jones Industrials (1200 p.m.) 908 ..75 S & P Composite (1200 p.m.) 98.15 ANTHONYW. TABELL DELAFIELD, HARVEY, TABELL Cumulative Index (6/9/77) 658.51 AWT/jb –I , No statement or expression of OpInion or any otner motter herein contOlned IS, or IS 10 be deemed to be, dtrectly or indirectly, on offer or the solicltotlon of on offer to buy or sell any secunty referred 10 or menhoned The molter Is presented merely for the convertence of the Sl,IbKrlber WhIle Ne believe the sources of our InformatIon to be reliable, we m no woy represent or guarantee the accuracy thereof nor of the statements mude herem Any action to be laken by the subscriber should be based on hiS own mvest,gat,on and mformotlon Janney Montgomery Scott, Inc. as a corporat,an, and Its officers or employees, mol now have, or may later toke, pOSitions or trades In respect 10 any seCUrities mentiOned In Ih,s or any future Issue, and such POSition may be different ffom any views now or hereafter expressed In Ih,s or any other Issue Janney Montgomery Scott, Inc, whICh IS registered WIth the SEC as on investment adVisor, may give odvlce to Its Investment adVisory ond othel customers Independently of any slotements mode In thiS or In any other Issue Further information on any sccuoty mentIoned herein IS available on request