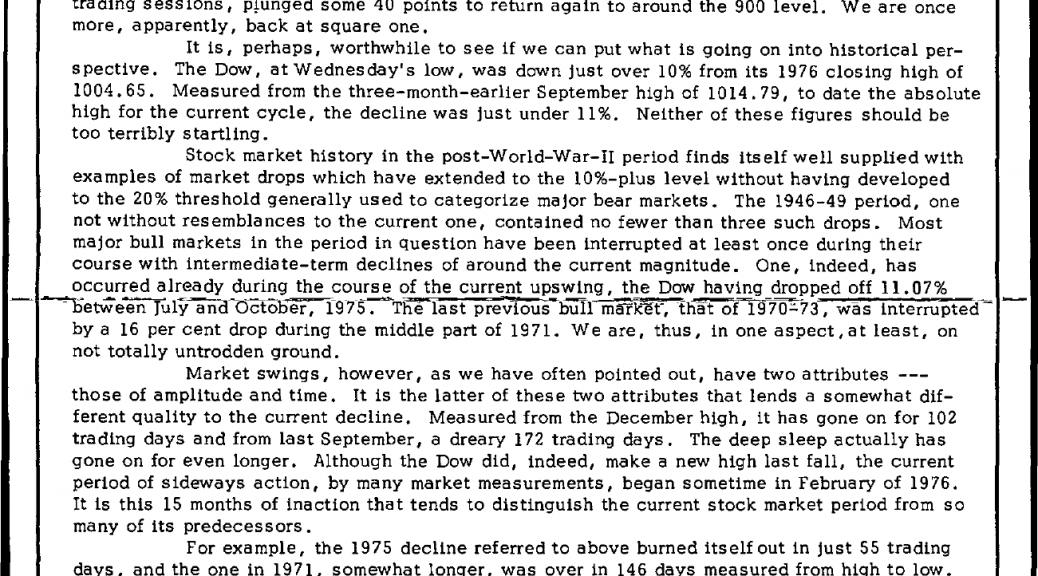 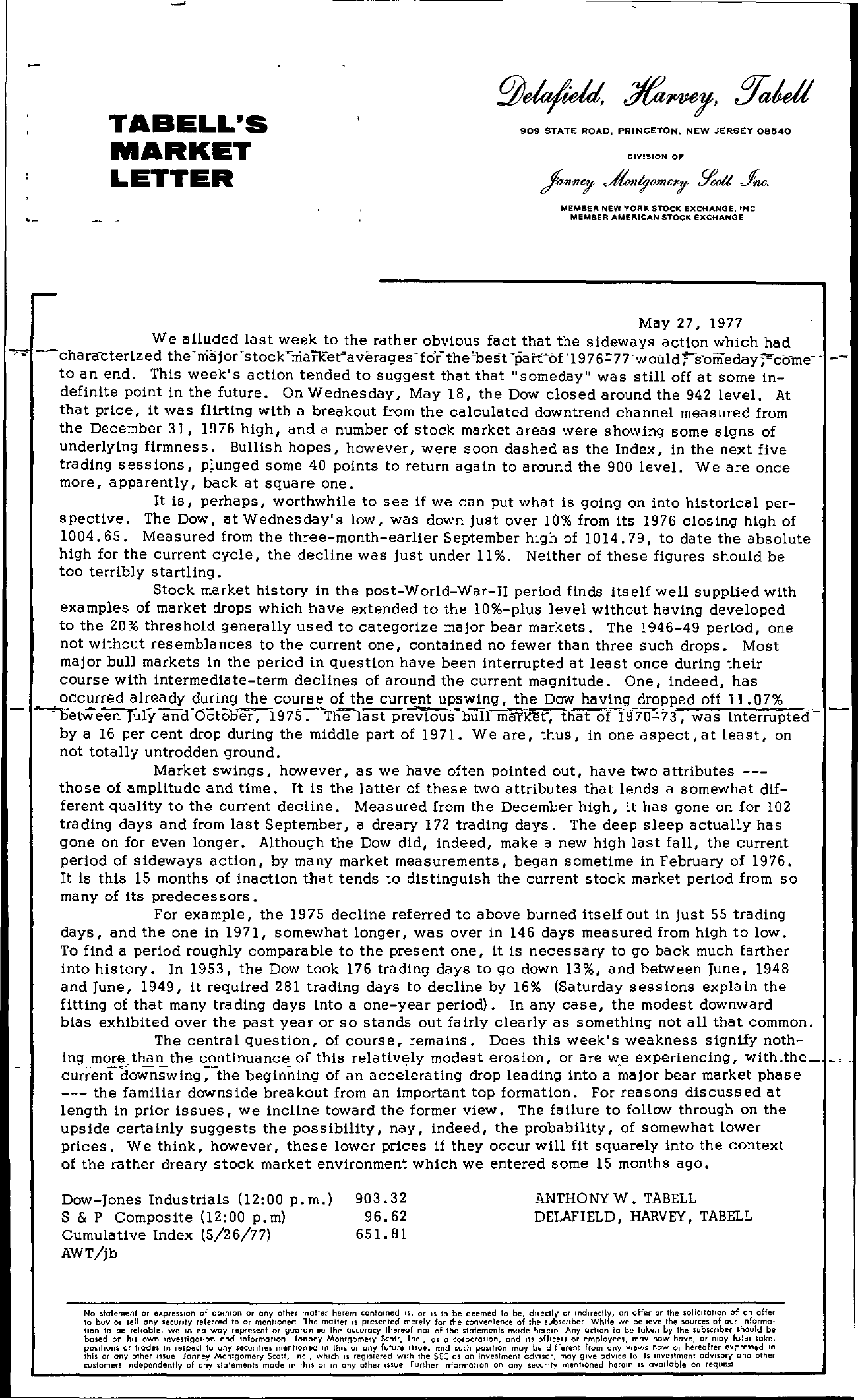 TABELL'S MARKET LETTER 909 STATE ROAD, PRINCETON, NEW JERSEY 08!540 DIYISION OF MEM8E' NEW VORK STOCK EXCHANGE, INC MEMBER AMERICAN STOCK EXCHANGE May 27, 1977 I…., -c hara- cter i zeWd tehealrlruidajebdr last week to the rather obvious fact 'stock-mai'Keeaverages-for-the'besrP that the sideways action which had art'bf 1976;;77 -would is-omeday;,cb-me- – — to an end. This week's action tended to suggest that that someday was still off at some in- definite point in the future. On Wednesday, May 18, the Dow closed around the 942 level. At that price, it was flirting with a breakout from the calculated downtrend channel measured from the December 31, 1976 high, and a number of stock market areas were showing some signs of underlying firmness. Bullish hopes, however, were soon dashed as the Index, in the next five trading sessions, ptunged some 40 points to return again to around the 900 level. We are once more, apparently, back at square one. It is, perhaps, worthwhile to see if we can put what is going on into historical per- spective. The Dow, at Wednesday's low, was down just over 10 from its 1976 closing high of 1004.65. Measured from the three-month-earlier September high of 1014.79, to date the absolute high for the current cycle, the decline was just under 11. Neither of these figures should be too terribly startling. Stock market history in the post-Worid-War-ll period finds itself well supplied with examples of market drops which have extended to the 10-plus level without having developed to the 20 threshold generally used to categorize major bear markets. The 1946-49 period, one not without resemblances to the current one, contained no fewer than three such drops. Most major bull markets in the period in question have been interrupted at least once during their course with intermediate-term declines of around the current magnitude. One, indeed, has occurred already during the course of the current upswing, the Dow having dropped off 11. 07 —–OetWeen JuryanaOctoJ5er, r97The last previous-Sun market-, that of 1970'73, was interrupted- by a 16 per cent drop during the middle part of 1971. We are, thus, in one aspect,at least, on not totally untrodden ground. Market swings, however, as we have often pointed out, have two attributes — those of amplitude and time. It is the latter of these two attributes that lends a somewhat dif- ferent quality to the current decline. Measured from the December high, it has gone on for 102 trading days and from last September, a dreary 172 trading days. The deep sleep actually has gone on for even longer. Although the Dow did, indeed, make a new high last fall, the current period of sideways action, by many market measurements, began sometime in February of 1976. It is this 15 months of inaction that tends to distinguish the current stock market period from so many of its predecessors. For example, the 1975 decline referred to above burned itself out in just 55 trading days, and the one in 1971, somewhat longer, was over in 146 days measured from high to low. To find a period roughly comparable to the present one, it is necessary to go back much farther into history. In 1953, the Dow took 176 trading days to go down 13, and between June, 1948 and June, 1949, it required 281 trading days to decline by 16 (Saturday sessions explain the fitting of that many trading days into a one-year period). In any case, the modest downward bias exhibited over the past year or so stands out fairly clearly as something not all that common. The central question, of course, remains. Does this week's weakness signify noth- ing more. than the continuance of this relativly modest erosion, or are w.e experiencing, with.the currentdownswing;the beginning of an accelerating drop leading into a major bear market phase — the familiar downSide breakout from an important top formation. For reasons discussed at length in prior issues, we incline toward the former view. The failure to follow through on the upside certainly suggests the possibility, nay, indeed, the probability, of somewhat lower prices. We think, however, these lower prices if they occur will fit squarely into the context of the rather dreary stock market environment which we entered some 15 months ago. Dow-Jones Industrials (1200 p.m.) S & P CompOSite (1200 p. m) Cumulative Index (5/26/77) AWT/jb 903.32 96.62 651. 81 ANTHONY W . TABELL DELAFIELD, HARVEY, TABELL No statement or exprenlon of opinion or any olher motler herern contolned IS, or a 10 be deemed to be, directly or indirectly, on offer or 'he OIiCIIOllon of on offer 10 buy or sell any security referred to Or menlloned The moiler 15 presented merely for the convef'ience of the subscnber White He belIeve the sources of our mformahan to be rei table, we m no way represent or guarantee the accuracy thereof nor of the statements mude '-Ierem Any achon 10 be taken by Ihe subscrtber should be based on hn own InveSligotlOn and Informahon Janney Montgomery Scott, Inc, as a corporation, and Its ofhcers or employees, may now have, or may loter lake, POSItions Of trades In respect ta any seCUflliei mentioned m thIS or any future Issue, and such POSItion may be different from any Views now or hereafter expressed In thh or any other Issue Janney Montgomery Scali, Inc, which IS regIstered With the SEC as an Investment adVisor, may give adVice to Its Investment advISOry and other customers Independently of any statements made In Ihls or In any ather Issue FUr1her mformatlon on any secunty mentioned herem IS available on request