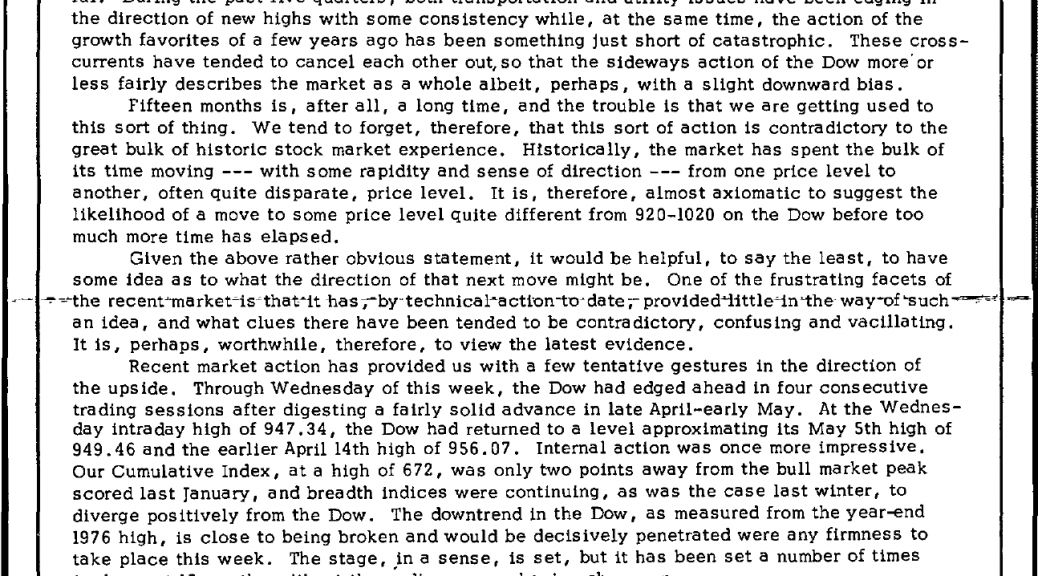 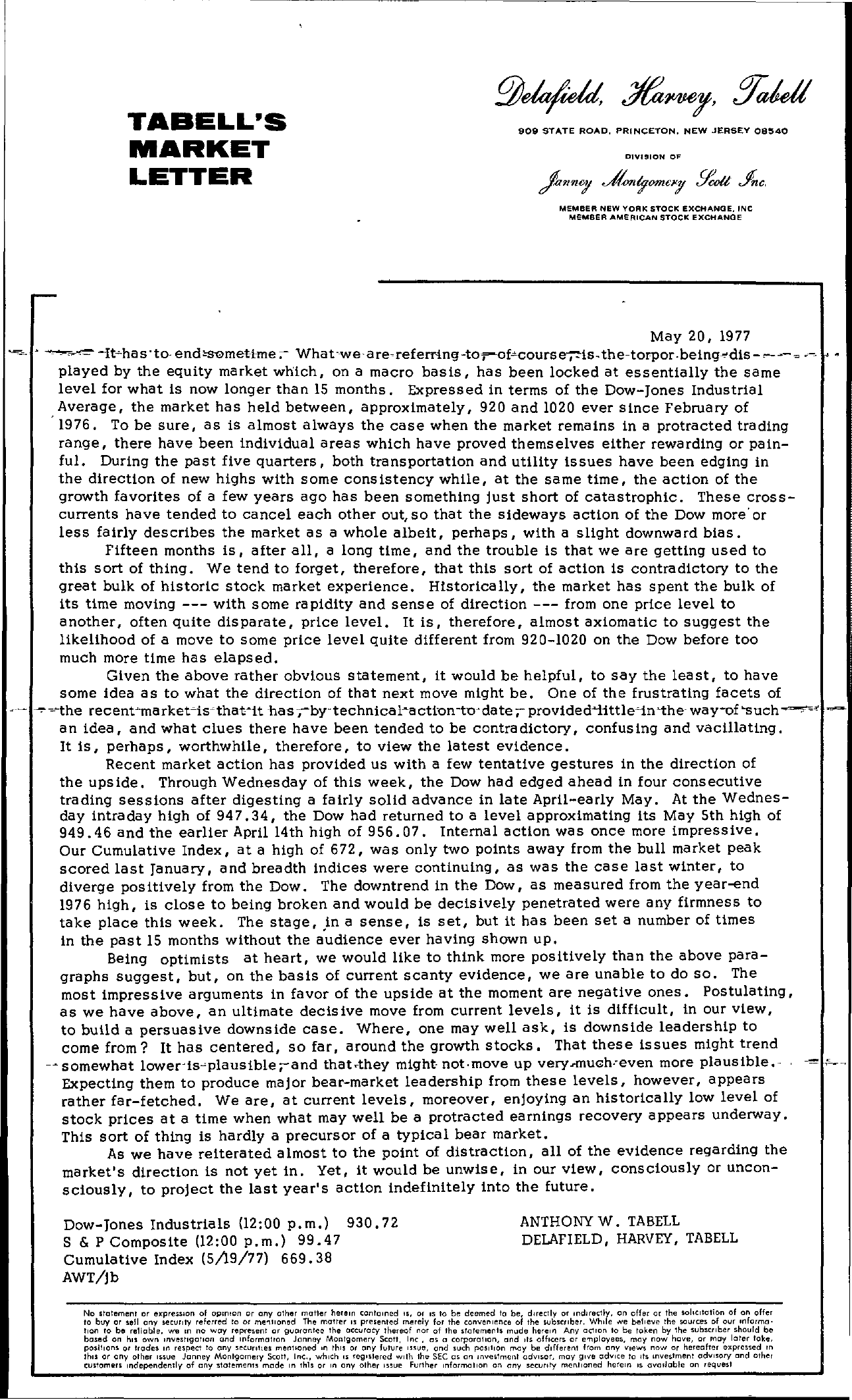 TABELL-S MARKET LETTER 909 STATE ROAD, PRINCETON. NEW JERSEY 08540 DIVISION OF MEMBER NEW YORK STOCK eXCHANGE, INC MEMBER AMERICAN STOCK EXCHANGE May 20, 1977 '- ..,…..,..- -Ithas -to- end'S0met-i-me;– What-we-are-referr-ing-to,–of'course-;-is. the-torpor-beingdis–. . played by the equity market which, on a macro basis, has been locked at essentially the same level for what is now longer than 15 months Expressed in terms of the Dow-Jones Industrial Average, the market has held between, approximately, 920 and 1020 ever since February of 1976. To be sure, as is almost always the case when the market remains in a protracted trading range, there have been individual areas which have proved themselves either rewarding or painful. During the past five quarters, both transportation and utility issues have been edging in the direction of new highs with s orne cons istency while, at the sa me time, the action of the growth favorites of a few years ago has been something just short of catastrophic. These crosscurrents have tended to cancel each other out, so that the sideways action of the Dow more- or less fairly describes the market as a whole albeit, perhaps, with a slight downward bias. Fifteen months is, after all, a long time, and the trouble is that we are getting used to this sort of thing. We tend to forget, therefore, that this sort of action is contradictory to the great bulk of historic stock market experience. HIstorically, the market has spent the bulk of its time moving — with some rapidity and sense of direction — from one price level to another, often quite disparate, price level. It is, therefore, almost axiomatic to suggest the likelihood of a move to some price level quite different from 920-1020 on the Dow before too much more time has elapsed. Given the above rather obvious statement, it would be helpful, to say the least, to have some idea as to what the direction of that next move might be. One of the frustrating facets of .– …,.-the recentmarketisthatit -has ,..bYtechnicala ctton-tn-date, provided4.ittlein'the- wayOf such an idea, and what clues there have been tended to be contradictory, confusing and vacillating. It is, perhaps, worthwhile, therefore, to view the latest evidence. Recent market action has provided us with a few tentative gestures in the direction of the ups ide. Through Wednesday of this week, the Dow had edged ahead in four consecutive trading sessions after digesting a fairly solid advance in late April-early May. At the Wednesday intraday high of 947.34, the Dow had returned to a level approximating its May 5th high of 949.46 and the earlier April 14th high of 956.07. Internal action was once more impressive. Our Cumulative Index, at a high of 672, was only two points away from the bull market peak scored last January, and breadth indices were continuing, as was the case last winter, to diverge positively from the Dow. The downtrend in the Dow, as measured from the year-end 1976 high, is close to being broken and would be decisively penetrated were any firmness to take place this week. The stage, in a sense, is set, but it has been set a number of times in the past 15 months without the a'udience ever having shown up. Being optimists at heart, we would like to think more positively than the above paragraphs suggest, but, on the basis of current scanty evidence, we are unable to do so. The most impressive arguments in favor of the upside at the moment are negative ones. Postulating, as we have above, an ultimate decis ive move from current levels, it is difficult, in our view, to build a persuasive downside case. Where, one may well ask, is downSide leadership to come from It has centered, so far, around the growth stocks. That these issues might trend — somewhat lower-isplausible,and thatthey might- not-move up verymuch–even more plausible.Expecting them to produce major bear-market leadership from these levels, however, appears rather far-fetched. We are, at current levels, moreover, enjoying an historically low level of stock prices at a time when what may well be a protracted earnings recovery appears underway. This sort of thing is hardly a precursor of a typical bear market. As we have reiterated almost to the point of distraction, all of the evidence regarding the market's direction is not yet in. Yet, it would be unwise, in our view, consciously or unconsciously, to project the last year's action indefinitely into the future. Dow-Jones Industrials (l200 p.m.) 930.72 S & P Composite (1200 p.m.) 99.47 Cumulative Index (5/19/77) 669.38 AWT/jb ANTHONY W. TABELL DELAFIELD, HARVEY, TABELL No statement or IIxpresslon of opln!on or any other mal1er herein conlcllned IS, or IS to be deemed 10 be, directly or Indirectly, on offer or Ihe solicitation of on offer to bvy or sell anv security referred 10 or me'llioned The motter IS presented merely for the conveJ'!nnce of the subSCriber. While .JVe believe Ihe sources of our Informa tlon to be reliable, we In no way represent or guaranlee the accuroty thereof nor of the stotement mude herein Any action 10 be token by the ubcrlber should be based on hiS own mvestlgatlan and mformallon Janney Montgomery Scott, Inc, as a corporollon, and Its officers or e'T1ployecs, may now have, or may lotcr toke, poslt'OM or trades In respect 10 any seCUnties menlloncd In thiS or any future Issue, and such poslllOn may be different from any views now or hereofter expressed In thiS or any other Issue Janney Montgomery Scott, Inc which 1 registered With the SEC as an Investment adVisor, may give adVice 10 lis mvestmenl adVISOry and othel customeu Indcpendenlly of any stolemen! mode In this or In any other Issue Further informatIOn on cny security mentioned herein IS oVOIloble on request