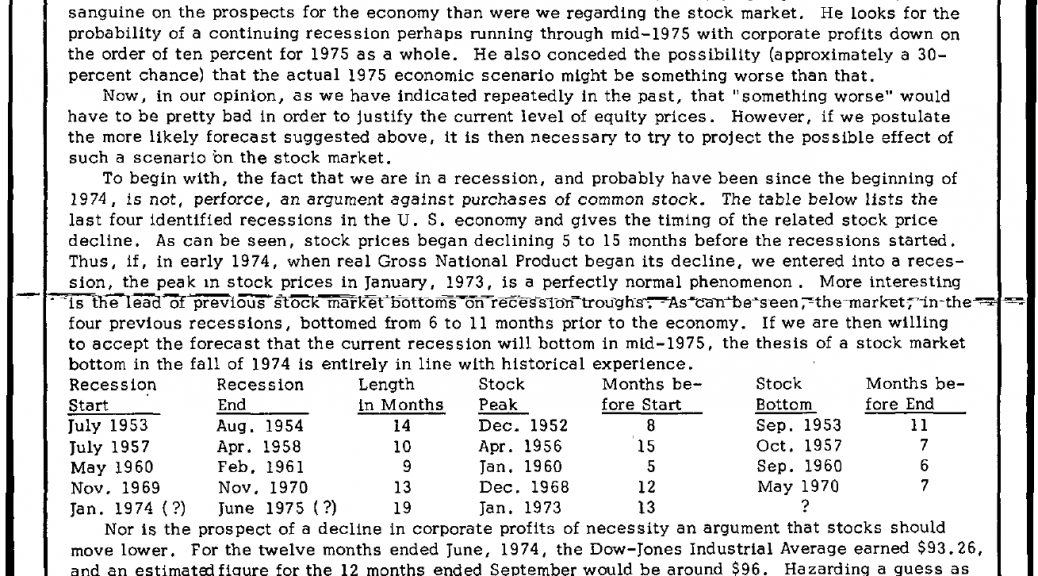 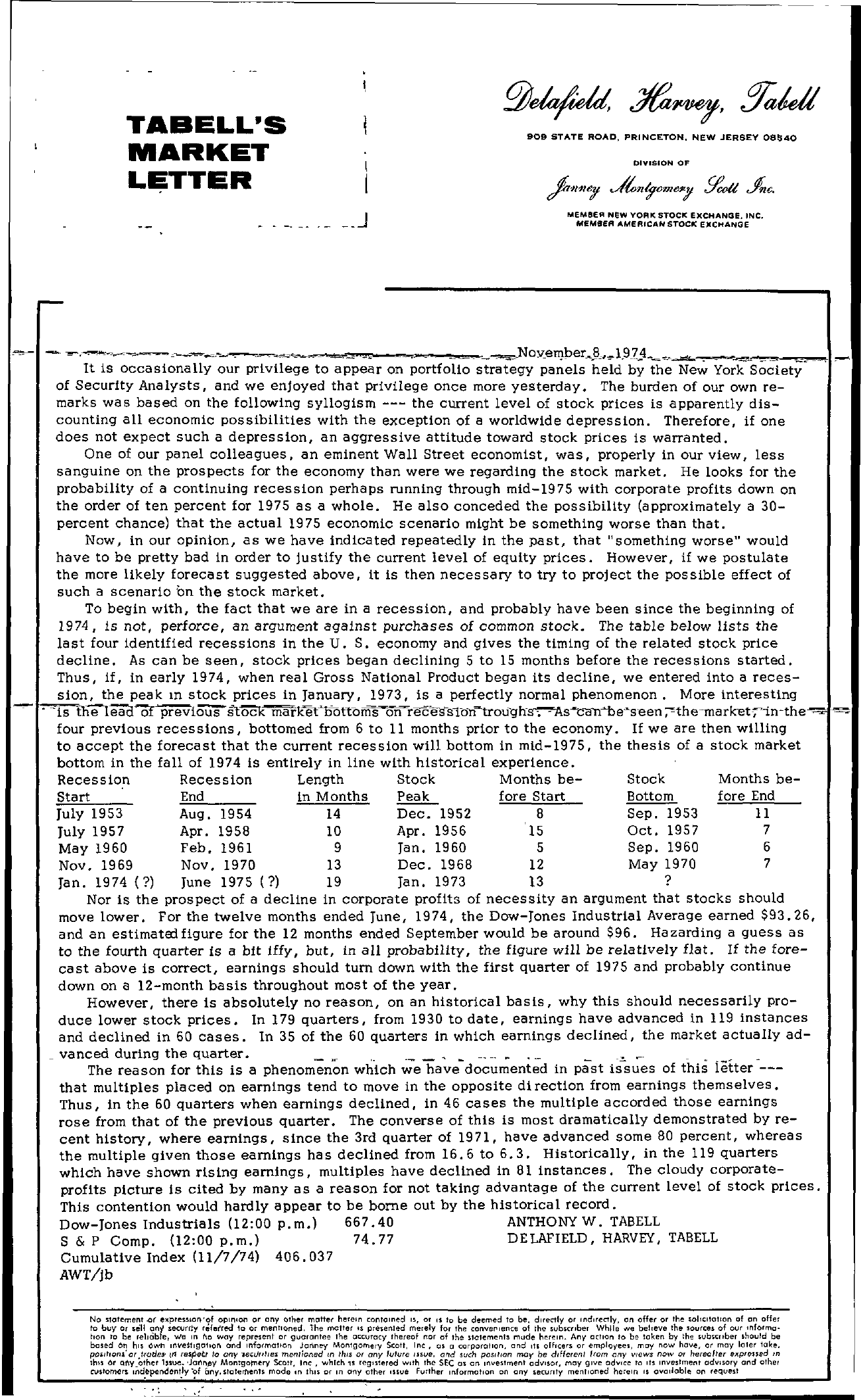 TABELL'S MARKET LETTER 909 STATE ROAD, PRINCETON. NEW JERSEY 081;540 DIVISION OF MEMBER NEW YORK STOCK EXCHANGE, INC. MEMBER AMERICAN STOCK eXCHANGe -. ……….-'——;.—''- 4 It is occasionally our privilege to appear on portfolio Noyember-,,-8..,19 -……—-,-,.—,1,stratgy paels held- by thNe;' YorkSclety- of Security Analysts, and we enjoyed that privilege once more yesterday. The burden of our own re- marks was based on the following syllogism — the current level of stock prices is apparently dis- counting all economic possibilities with the exception of a worldwide depression. Therefore, if one does not expect such a depression, an aggressive attitude toward stock prices is warranted. One of our panel colleagues, an eminent Wall Street economist, was, properly in our view, less sanguine on the prospects for the economy than were we regarding the stock market. He looks for the probability of a continuing recession perhaps running through mid-1975 with corporate profits down on the order of ten percent for 1975 as a whole. He also conceded the possibility (approximately a 30- percent chance) that the actual 1975 economic scenario might be something worse than that. Now, in our opinion, as we have indicated repeatedly in the past, that something worse would have to be pretty bad in order to justify the current level of equity prices. However, if we postulate the more likely forecast suggested above, it is then necessary to try to project the possible effect of such a scenario 'On the stock market. To begin with, the fact that we are in a recession, and probably have been since the beginning of 1974, is not, perforce, an argument against purchases of common stock. The table below lists the last four identified recessions in the U. S. economy and gives the timing of the related stock price decline. As can be seen, stock prices began declining 5 to 15 months before the recessions started. Thus, if, in early 1974, when real Gross National Product began its decline, we entered into a reces- sion, the peak In stock prices in January, 1973, is a perfectly normal phenomenon. More interesting – . is Hie leat!of previousStock marketboftoms on recesslc;n-trou-ghAsca!lbes-eenthemarkBt;–inthe- four previous recessions, bottomed from 6 to 11 months prior to the economy. If we are then willing to accept the forecast that the current recession will bottom in mld-1975, the thesis of a stock market bottom In the fall of 1974 Is entirely in line with historical experience. Recession Recession Length Stock Months be- Stock Months be- Start End in Months Peak fore Start Bottom fore End July 1953 Aug. 1954 14 Dec. 1952 8 Sep. 1953 11 July 1957 Apr. 1958 10 Apr. 1956 '15 Oct. 1957 7 May 1960 Feb. 1961 9 Jan. 1960 5 Sep. 1960 6 Nov. 1969 Nov. 1970 13 Dec. 1968 12 May 1970 7 Jan. 1974 () June 1975 () 19 Jan. 1973 13 Nor Is the prospect of a decline in corporate profits of necessity an argument that stocks should move lower. For the twelve months ended June, 1974, the Dow-Jones Industrial Average earned 93.26, and an estimatedflgure for the 12 months ended September would be around 96. Hazarding a guess as to the fourth quarter is a bit iffy, but, in all probability, the figure will be relatively flat. If the fore- cast above is correct, earnings should turn down with the first quarter of 1975 and probably continue down on a 12-month basis throughout most of the year. However, there is absolutely no reason, on an historical basis, why this should necessarily pro- duce lower stock prices. In 179 quarters, from 1930 to date, earnings have advanced in 119 instances and declined in 60 cases. In 35 of the 60 quarters in which earnings declined, the market actually ad- vanced during the quarter. .c , ' … .-,- . . The reason for this is a phenomenon which we have documented in past issues of this letter — that multiples placed on earnings tend to move in the oppOSite dl rection from earnings themselves. Thus, in the 60 quarters when earnings declined, in 46 cases the multiple accorded those earnings rose from that of the previous quarter. The converse of this is most dramatically demonstrated by re- cent history, where earnings, since the 3rd quarter of 1971, have advanced some 80 percent, whereas the multiple given those earnings has declined from 16.6 to 6.3. Historically, in the 119 quarters which have shown rising earnings, multiples have declined in 81 instances. The cloudy corporate- profits picture is cited by many as a reason for not taking advantage of the current level of stock prices. This contention would hardly appear to be borne out by the historical record. Dow-Jones Industrials (1200 p.m.) 667.40 ANTHONYW. TABELL S & P Compo (1200 p.m.) 74.77 DELAFIELD, HARVEY, TABELL Cumulative Index (11/7/74) 406.037 AWT/jb No siolemenl.o( exptesslon'of opinion or any olher maHer herein conlolned IS, or IS 10 be deemed 10 be, directly or Indirectly, on offer or the ollcltollon of on offer to buy or e11 any securrfy referred to or mentioned, The moiler 1 presented merely for the COnvef'lence of the subSCriber While Ne beheve the 50urces of our 'nforma tlon 10 be relJ1lble, we In 1\0 way represent or guarantee Ihe accvracy thereof nor of Ihe statements mude herein. Any action to be laken by the subcnber should be based 6n hiS own Investlgallon and information Janney Montgomery Scolt, Inc, as a corporation, and In officers or employees, may now have, or may later toke, P051lronl' or k-ades- (rt respett to any lecUfltles mention.ed In thl (If an.y future IHue, artd such POSition may be different from ony VleW now or hereaFter el(prened In tl'lIS or any.other 1ssl.JoC. 'Jann.eY Montgomery Scott, Inc, whIch 15 reg!5terod With Ihe SEC as on I1westment adVisor, may give odvlce to Its Investment adv,sory and other euslomCtl Ind.tpendcnl.ly 'f any, staternents mode In tn15 or In any other Issue Further information on any security mentioned herein IS aVOIlable an request – -'