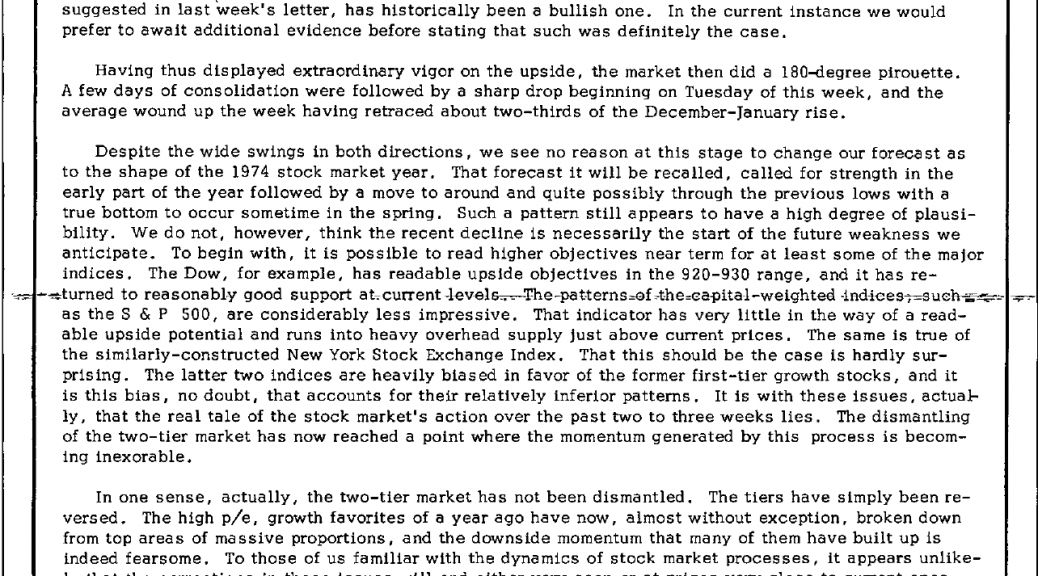 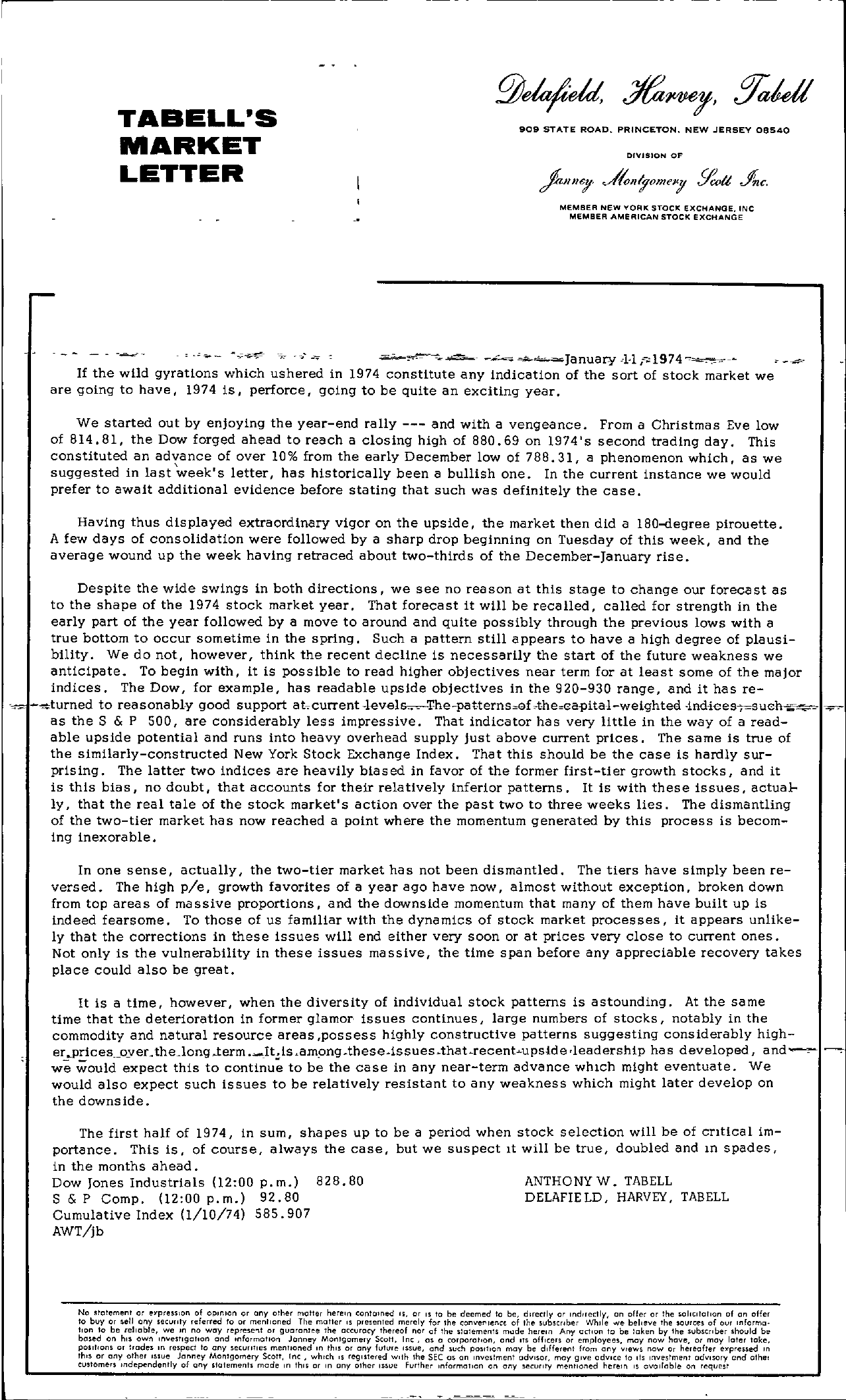 0—————————————————— TABELL'S MARKET LETTER 909 STATE ROAD. PRINCETON, NEW JERSEY OB540 DIVISION OF MEMBER NEW VORK STOCK EXCHANGE, INC MEMBER AMERICAN STOCK EXCHANGE – — – – —- .- -; 7- ..- ..- – – … Januaryl.l/;;1974…, — .- If the wild gyrations which ushered in 1974 constitute any indication of the sort of stock market we are going to have, 1974 is, perforce, gOing to be quite an exciting year. We started out by enjoying the year-end rally — and with a vengeance. From a Christmas Eve low of 814.81, the Dow forged ahead to reach a closing high of 880.69 on 1974's second trading day. This constituted an advance of over 10 from the early December low of 788.31, a phenomenon which, as we suggested in last 'week's letter, has historically been a bullish one. In the current instance we would prefer to await additional evidence before stating that such was definitely the case. Having thus displayed extraordinary vigor on the upside, the market then did a 180-degree pirouette. A few days of consolidation were followed by a sharp drop beginning on Tuesday of this week, and the average wound up the week having retraced about two-thirds of the December-January rise. Despite the wide swings in both directions, we see no reason at this stage to change our forecast as to the shape of the 1974 stock market year. That forecast it will be recalled, called for strength in the early part of the year followed by a move to around and quite possibly through the previous lows with a true bottom to occur sometime in the spring. Such a pattern still appears to have a high degree of plausibility. We do not, however, think the recent decline is necessarily the start of the future weakness we anticipate. To begin with, it is possible to read higher objectives near term for at least some of the major indices. The Dow, for example, has readable upside objectives in the 920-930 range, and it has re-, -,turned to reasonabl-y good support atcurrentlevelrhepat-ternsGf-theeaiita-I-weighted -indiees-;sueh ,-, as the S & P 500, are considerably less impressive. That indicator has very little in the way of a readable upside potential and runs into heavy overhead supply just above current prices. The same is true of the similarly-constructed New York Stock Exchange Index. That this should be the case is hardly surprising. The latter two indices are heavily biased in favor of the former first-tier growth stocks, and it is this bias, no doubt, that accounts for their relatively inferior patterns. It is with these issues, actual-Iy, that the real tale of the stock market's action over the past two to three weeks lies. The dismantling of the two-tier market has now reached a point where the momentum generated by this process is becoming inexorable. In one sense, actually, the two-tier market has not been dismantled. The tiers have simply been reversed. The high p/e, growth favorites of a year ago have now, almost without exception, broken down from top areas of massive proportions, and the downside momentum that many of them have built up is indeed fearsome. To those of us familiar with the dynamics of stock market processes, it appears unlikely that the corrections in these issues will end either very soon or at prices very close to current ones. Not only is the vulnerability in these issues maSSive, the time span before any appreciable recovery takes place could also be great. It is a time, however, when the diversity of individual stock patterns is astounding. At the same time that the deterioration in former glamor' issues continues, large numbers of stocks, notably in the commodity and natural resource areas ,possess highly constructive patterns suggesting considerably higher.pricesoyer.the.long,term .It!ls.ampng.these.lssues.that.recentkupstde ,leadership ha s developed, and-,.. we would expect this to continue to be the case in any near-term advance whlch might eventuate. We would also expect such issues to be relatively resistant to any weakness which might later develop on the downside. The first half of 1974, in sum, shapes up to be a period when stock selection will be of cntical im- portance. This is, of course, always the case, but we suspect It will be true, doubled and In spades, in the months ahead. Dow Jones Industrials (1200 p. m.) 828.80 S & P Compo (1200 p.m.) 92.80 ANTHONY W. TAB ELL DELAFIE LD, HARVEY, TAB ELL Cumulative Index (1/10/74) 585.907 AWT/jb No statement or e)'preSS10n of opinion or any other molter herein tontoH\ed IS, or IS 10 be deemed to be, directly or IndHectly, on offer or the soliCitatIon of on offer to buy or selJ any security referred 10 or mentioned The moiler 1 presented merely for the conver'lenct of the subscrIber WhIle -Ne believe the sources of our Informa tlon 10 be reliable, we m no way represe.,1 or guarantee the accuracy thereof nor of the statements mllde herein Any action to be token by Ihe subscriber should be based on hiS own Investlgallon and mformotlon Jonney Montgomery SCali, Inc, as a carperolton, ond Its officers or employees, may now have, or may later toke, posilions or trades In respect to any securities mentioned In thiS or any future Issue, and such paslilon may be different from any views now or hereafter expressed In th,s or any other Issue Janney Montgomery Scott, Inc, which ,s registered With Ihe SEC as on Ifwestment adVisor, may give odvlce to Its Investment ad'o'l5ory cnd clhel customers Independently of any statements mode In thl or In any other Issue Further Informotlon on ony security mentioned herein IS ovolloble on request