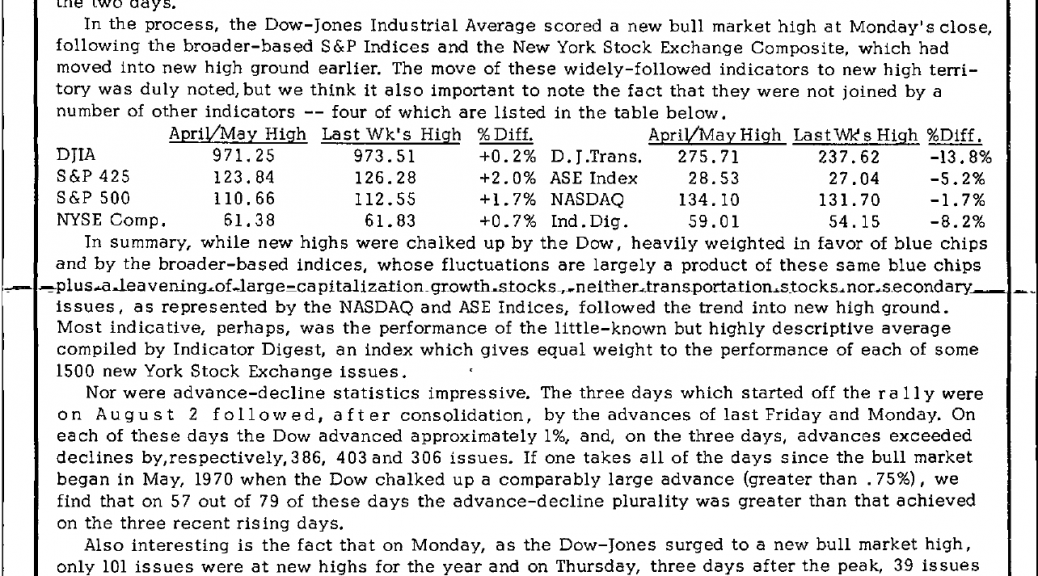 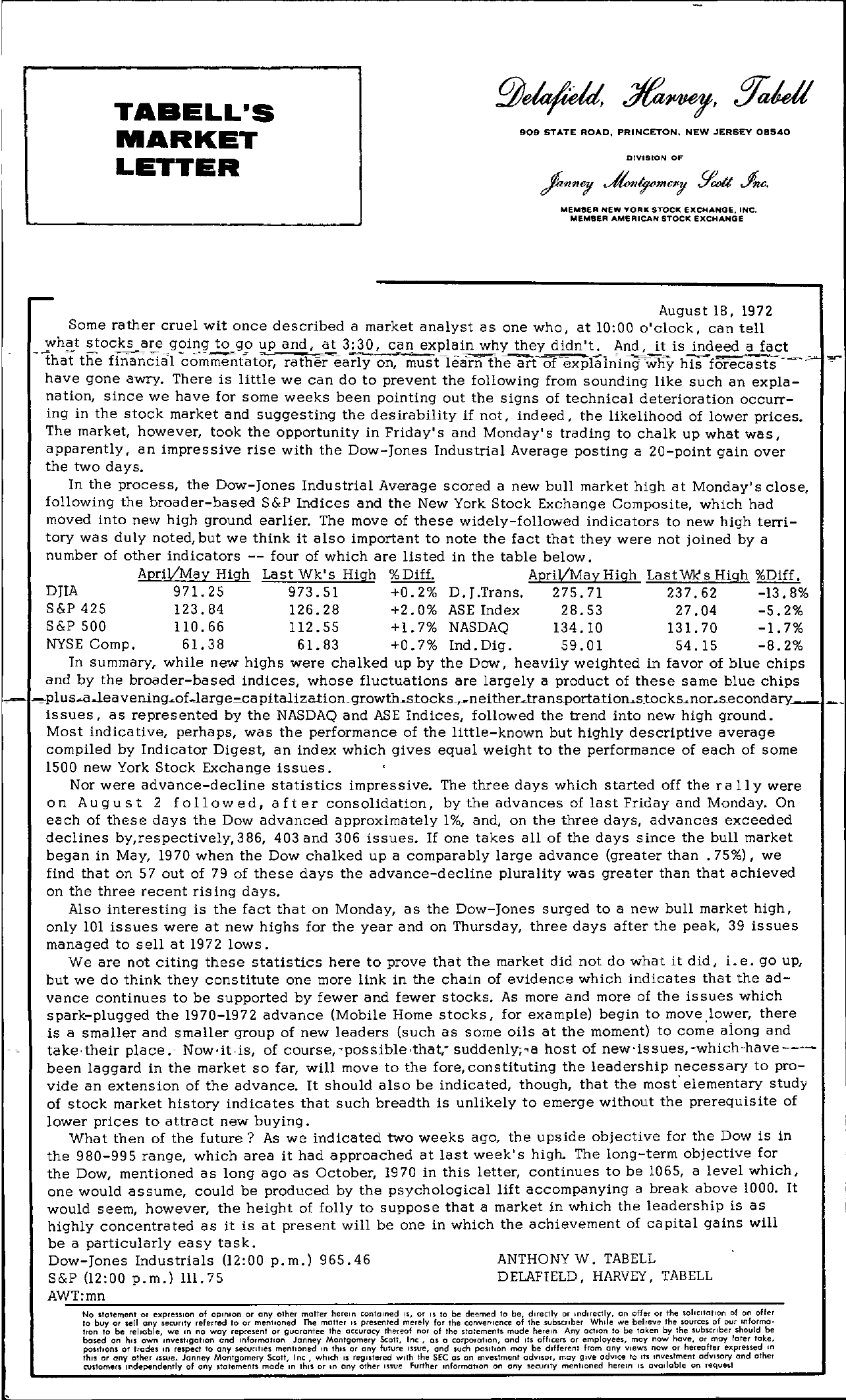 TABELL'S MARKET LETTER 909 STATE ROAD, PRINCETON. NEW JERSEY 08540 DIVISION OF MEM8ER NEW VORK STOCK eXCHANGE, INC. MEMBER AMERICAN STOCI( eXCHANGE – August 18, 1972 Some rather cruel wit once described a market analyst as one who, at 1000 o'clock, can tell 'Nht stocks are going to go up and, at 330, can explain why they didn't. And, it is indeed a fact -that the finanCial commentator. rather early on, musClearn the art oCexplalni;-hy hiSforecasts- have gone awry. There is little we can do to prevent the following from sounding like such an expla- nation, since we have for some weeks been pointing out the signs of technical deterioration occurr- ing in the stock market and suggesting the desirability if not, indeed, the likelihood of lower prices. The market, however, took the opportunity in Friday's and Monday's trading to chalk up what was, apparently, an impressive rise with the Dow-Jones Industrial Average posting a 20-point gain over the two days. In the process, the Dow-Jones Industrial Average scored a new bull market high at Monday's close, following the broader-based S&P Indices and the New York Stock Exchange Composite, which had moved into new high ground earlier. The move of these widely-followed indicators to new high terri- tory was duly noted, but we think it also important to note the fact that they were not joined by a number of other indicators — four of which are listed in the table below. ApriVMay High Last Wk's High Diff. ApriVMay High LastWI' s High Diff. DJIA 971.25 973.51 0.2 D.J.Trans. 275.71 237.62 -13.8 S&P 425 123.84 126.28 2.0 ASE Index 28.53 27.04 -5.2 S&P500 110.66 112.55 1.7 NASDAQ 134.10 131.70 -1.7 NYSE Compo 61.38 61.83 0.7 Ind.Dig. 59.01 54.15 -8.2 In summary, while new highs were chalked up by the Dow, heavily weighted in favor of blue chips and by the broader-based indices, whose fluctuations are largely a product of these same blue chips plusa..leaveningoflargecapitalizationgrowthlocks,neithertrans-portation.tocks.norsecondary issues, as represented by the NASDAQ and ASE Indices, followed the trend into new high ground. Most indicative, perhaps, was the performance of the little-known but highly descriptive average compiled by Indicator Digest, an index which gives equal weight to the performance of each of some 1500 new York Stock Exchange issues. Nor were advance-decline statistics impressive. The three days which started off the raIl y were on August 2 followed, after consolidation, by the advances of last Friday and Monday. On each of these days the Dow advanced approximately 1, and, on the three days, advances exceeded declines by,respectively,386, 403 and 306 issues. If one takes all of the days since the bull market began in May, 1970 when the Dow chalked up a comparably large advance (greater than. 75), we find that on 57 out of 79 of these days the advance-decline plurality was greater than that achieved on the three recent rising days. Also interesting is the fact that on Monday, as the Dow-Jones surged to a new bull market high, only 101 issues were at new highs for the year and on Thursday, three days after the peak, 39 issues managed to sell at 1972 lows. We are not citing these statistics here to prove that the market did not do what it did, i. e. go up, but we do think they constitute one more link in the chain of evidence which indicates that the ad- vance continues to be supported by fewer and fewer stocks. As more and more of the issues which spark-plugged the 1970-1972 advance (Mobile Home stocks, for example) begin to move lower, there is a smaller and smaller group of new leaders (such as some oils at the moment) to come aiong and take,their p1ace.- Now-it-is, of course,'possible,that; suddenly;-a host of new'issues,-which-have– been laggard in the market so far, will move to the fore, constituting the leadership necessary to pro- vide an extension of the advance. It should also be indicated, though, that the most' elementary study of stock market history indicates that such breadth is unlikely to emerge without the prerequisite of lower prices to attra ct new buying. What then of the future As we indicated two weeks ago, the upside objective for the Dow is in the 980-995 range, which area it had approached at last week's high. The long-term objective for the Dow, mentioned as long ago as October, 1970 in this letter, continues to be 1065, a level which, one would assume, could be produced by the psychological lift accompanying a break above 1000. It would seem, however, the height of folly to suppose that a market in which the leadership is as highly concentrated as it is at present will be one in which the achievement of capital gains will be a particularly easy task. Dow-Jones Industrials (1200 p.m.) 965.46 S&P (1200 p.m.) 111. 75 ANTHONY W. TAB ELL DELAFIELD, HARVEY, TAB ELL AWTmn No stalement or expression of oplnton or any other matter herein tontOlned IS, or IS 10 be deemed to be, directly or mdnec1ly. on oHer or the rolUllotlon of on offer 10 buy or seli Clny security referred to or mel'l'Ioned The matter IS presented merely for the converlence of The subscriber While we belreve the sources of Ol,lr Informa lion TO be reliable, we 10 no woy represenT or guarantee the occurocy IhereQf nor of the stoTements mude herem Any OCTlon to be token by the .subscriber should be bas.ed on hiS own IOvestlgotlon and Informallon Jonney Montgomery Scoll, Inc, as 0 corporotlon, ond lIs officers or employees, may now hove, or moy laTer toke, posiTions or trades 10 respect to any secUrities menTioned In thiS or any future ISSUe, and such posiTion moy be different from any views now or hereafter expressed In thiS or any other ,ssue. Janney Montgomery Scoll, Inc, which IS registered With the SEC os on inVestmenT odvisor, may gille adVice to Its Investment odvlsory ond othel customers Independently of any statements mode 10 thiS or In any olher Issue Further information on ony security mentioned herein IS ovodoble on request