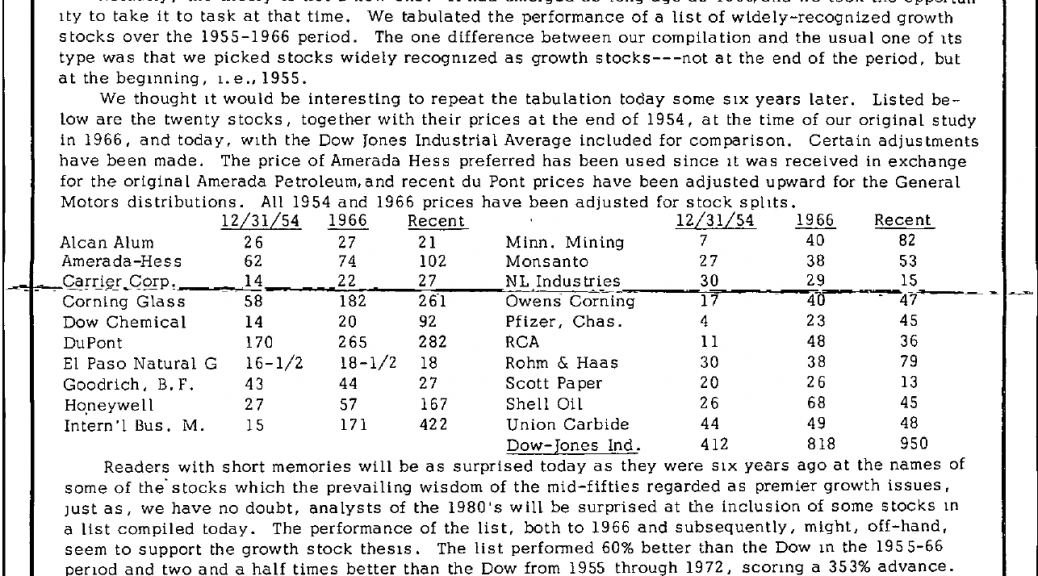 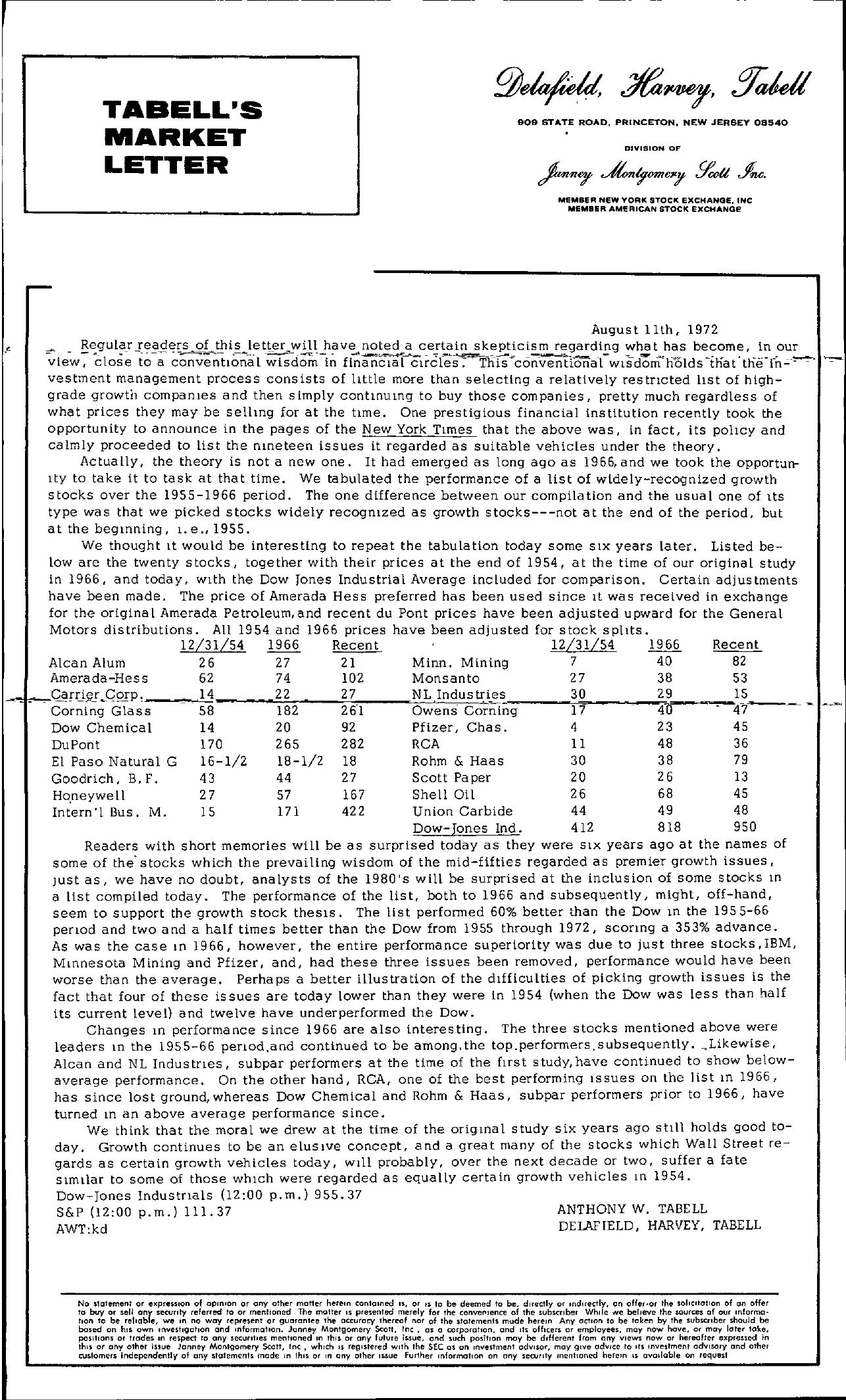 – – – – – – – – – -.—————— TABELL-S MARKET LETTER 909 STATE ROAD, PRINCETON. NEW JERSEY 08540 DIVISION OF MEMBER NEW YORK STOCK EXCHANGE, INC MEMBER AMERICAN STOCK EXCHANGE – August 11th, 1972 — , egular sede,s ()f thi,,letter,will have noted a certain skepticism regarding what has become, in our . —..- ,-, – – – – . – – ..,.-t…….,– -' !ll view. close to a conventIOnal wisdom in finanCial clrcles – Tnis-conventional w3dom-h'61ds'tnat'the'rn-' vestment management process consists of Ilttle more than selecting a relatively restricted Ilst of high- grade growth compaOles and then simply contlOulOg to buy those companies, pretty much regardless of what prices they may be seillng for at the hme. One prestigious financial institution recently took the opportunity to announce in the pages of the New York Times that the above was. in fac\, its pollcy and calmly proceeded to list the Olneteen issues it regarded as suitable vehicles under the theory. Actually, the theory is not a new one. It had emerged as long ago as 1966, and we took the opportun- Ity to take it to task at that time. We tabulated the performance of a list of widely-recognized growth stocks over the 1955-1966 period. The one difference between our compilation and the usual one of Its type was that we picked stocks widely recogOlzed as growth stocks—not at the end of the period. but at the beglOning, I.e., 1955. We thought It would be interesting to repeat the tabulation today some SIX years later. Listed be- low are the twenty stocks, together with their prices at the end of 1954, at the time of our original study in 1966, and today, With the Dow Jones Industrial Average included for comparison. Certain adjustments have been made. The price of Amerada Hess preferred has been used since It was received in exchange for the original Amerada Petroleum, and recent du Pont prices have been adjusted upward for the General Motors distributions. All 1954 and 1966 prices have been adjusted for stock spllts. 12/31/54 1966 Recent 12/31/54 1966 Recent Alcan Alum Amerada-Hess 26 62 27 21 Minn. Mining 74 102 Monsanto 7 27 40 82 38 53 1,,C,a!Tjj;'rCQ!'P, .'1c4 Corning Glass 58 22 27 182 261 NL Industries Owens Coing 30 17 29 ….,.15 40 47—- Dow Chemical 14 20 92 Pfizer, Chas. 4 23 45 DuPont EI Paso Natural G Goodrich, B. F. H0.neywell Intern'l Bus. M. 170 16-1/2 43 27 15 265 18-1/2 44 57 171 282 18 27 167 422 RCA Rohm & Haas Scott Paper Shell Oil Union Carbide Dow- lones Ind. 11 30 20 26 44 412 48 36 38 79 26 13 68 45 49 48 818 950 Readers with short memories will be as surprised today as they were SIX years ago at the names of some of the' stocks which the prevailing wisdom of the mid-fifties regarded as premier growth issues, Just as, we have no doubt, analysts of the 1980's will be surprised at the inclusion of some stocks 10 a list compiled today. The performance of the list, both to 1966 and subsequently, might, off-hand, seem to support the growth stock thesIs. The list performed 60 better than the Dow 10 the 1955-66 period and two and a half times better than the Dow from 1955 through 1972, sconng a 353 advance. As was the case 10 1966, however, the entire performance superiority was due to just three stocks,IBM, MlOnesota Mining and Pfizer, and, had these three issues been removed, performance would have been worse than the average. Perhaps a better illustration of the difficulties of picking growth issues is the fact that four of these issues are today lower than they were in 1954 (when the Dow was less than half its current level) and twelve have underperformed the Dow. Changes 10 performance since 1966 are also interesting. The three stocks mentioned above were leaders In the 1955-66 penod,and continued to be among. the top.performers.subsequently. Likewise, Alcan and NL Industries, subpar performers at the time of the hrst study, have continued to show below- average performance. On the other hand, RCA, one of the best performing Issues on the list 10 1966, has since lost ground,whereas Dow Chemical and Rohm & Haas, subpar performers prior to 1966, have turned m an above average performance since. We think that the moral we drew at the time of the origlOal study six years ago stlll holds good to- day. Growth continues to be an elUSive concept, and a great many of the stocks which Wall Street re- gards as certain growth vehicles today, Will probably, over the next decade or two, suffer a fate Slmllar to some of those WhlCh were regarded as equally certain growth vehicles In 1954. Dow-Jones Industrials (1200 p.m.) 955.37 S&P (1200 p.m,) 111.37 AWTkd ANTHONY W. TABELL DELAFIELD, HARVEY, TABELL No falement or expresSion of opinion or ony other maHer herein contomed IS, or 1 10 be deemed to be, directly or indirectly, an offer-or Ihe SOlitllallon of on offer to buy or sell any setunty referred to or mentIoned The matter IS presented merely for the tonver.ente of the substnber While He believe the sourtes of our Informa tlon to be rehable, we In no way represent or guarantee the atcuraty thereof nor of Ihe statements mucle herem Any action fa be token by the substnber should be based on hiS own Invesllgallon and Information. Janney Montgomery Scott, Inc, as a oorporol1on, and Its officers or employees, may now have, or may later toke, pasilions or trades In respect to any sec;unhes mentioned In thiS or any future issue, and such position may be different from any views now or hereafter expressed in thiS or any other issue Janney Montgomery Soolt, Inc, which IS registered With the SEC as on mvestment adVisor, moy give adVice to lis Investment adVIsory and other customers Independently of any statements mode In thiS or In ony other Issue FUr1her information on any security menlioned herem IS available on request