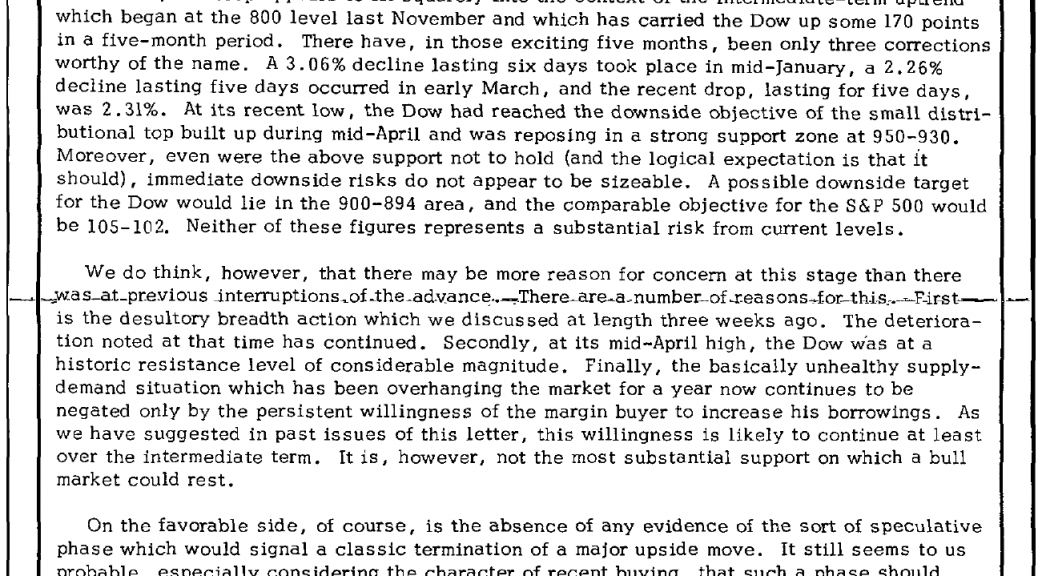 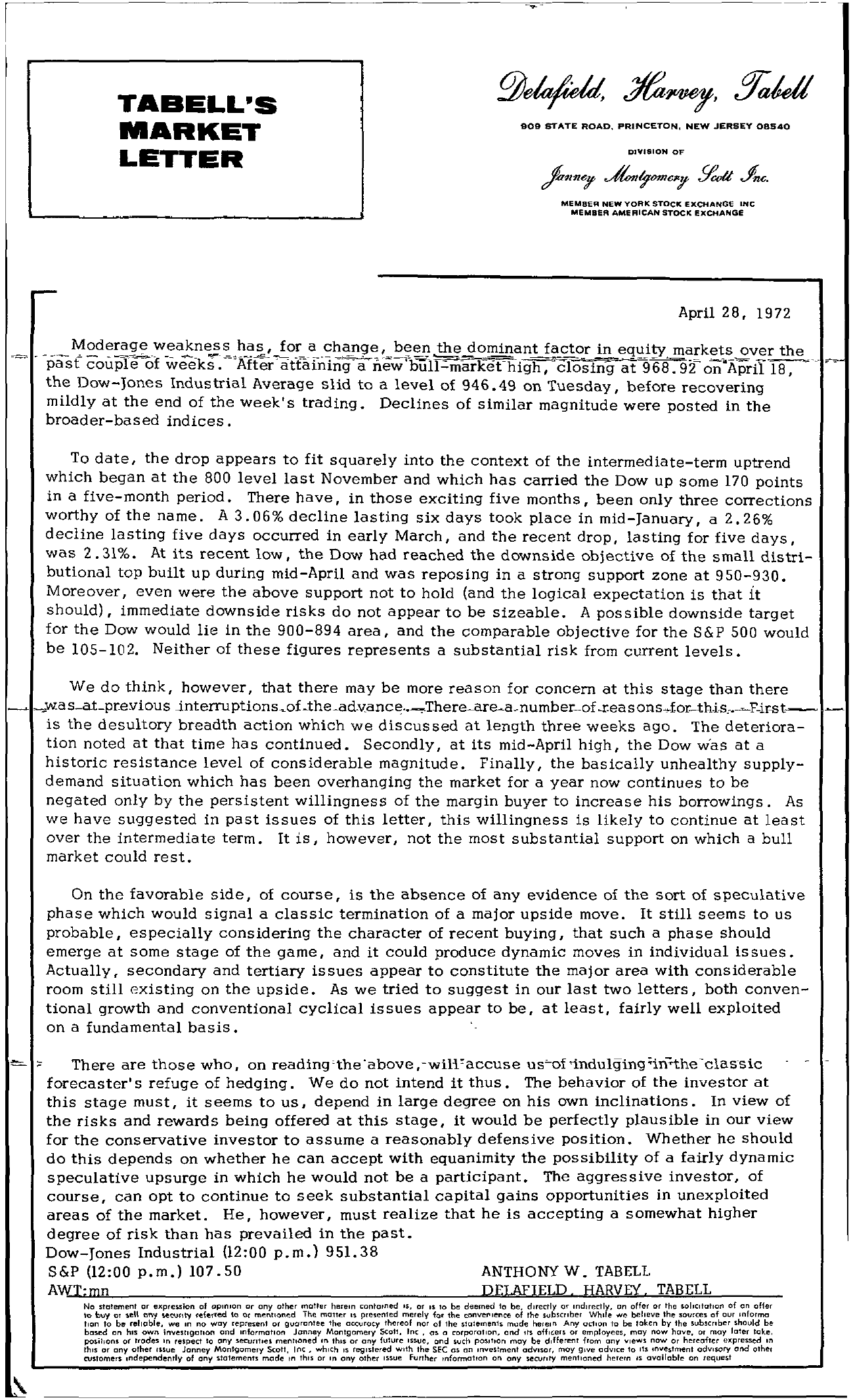 TABELL'S MARKET LETTER 909 STATE ROAD, PRINCETON, NEW JERSEY 08540 DIVISION OF MEMBER NEW YORK STOCK EXCHANGE INC MEMBER AMERICAN STOCK EXCHANGE April 28, 1972 — – pasf a Moderage weakness has, for a chC!nge, bE!en the dominant factor in equity markets over the coupfe -ciJ week;;-'A1rattaii11ri(i new'lJuYG;;;arJethigh, closing at 968. 92 oApdf the Dow-Jones Industrial Average slid to a level of 946.49 on Tuesday, before recovering mildly at the end of the week's trading. Declines of similar magnitude were posted in the broader-based indices. To date, the drop appears to fit squarely into the context of the intermediate-term uptrend which began at the 800 level last November and which has carried the Dow up some 170 points in a five-month period. There have, in those exciting five months, been only three corrections worthy of the name. A 3.06 decline lasting six days took place in mid-January, a 2.26 decline lasting five days occurred in early March, and the recent drop, lasting for five days, was 2.31. At its recent low, the Dow had reached the downside objective of the small distributional top built up during mid-April and was reposing in a strong support zone at 950-930. Moreover, even were the above support not to hold (and the logical expectation is that it should), immediate downside risks do not appear to be Sizeable. A possible downside target for the Dow would lie in the 900-894 area, and the comparable objective for the S&P 500 would be 105-102. Neither of these figures represents a substantial risk from current levels. We do think, however, that there may be more reason for concern at this stage than there wasaLprevious lnterruptionsof-theadNance,,,,Thereare.anumberofreasons-for-thtsc.F-ir-st- is the desultory breadth action which we discussed at length three weeks ago. The deterioration noted at that time has continued. Secondly, at its mid-April high, the Dow was at a historic resistance level of considerable magnitude. Finally, the basically unhealthy supplydemand situation which has been overhanging the market for a year now continues to be negated only by the persistent willingness of the margin buyer to increase his borrowings. As we have suggested in past issues of this letter, this willingness is likely to continue at least over the intermediate term. It is, however, not the most substantial support on which a bull market could re st. On the favorable side, of course, is the absence of any eVidence of the sort of speculative phase which would signal a classic termination of a major upside move. It still seems to us probable, especially considering the character of recent buying, that such a phase should emerge at some stage of the game, and it could produce dynamic moves in individual is sues. Actually, secondary and tertiary issues appear to constitute the major area with considerable room still existing on the upside. As we tried to suggest in our last two letters, both conventional growth and conventional cyclical issues appear to be, at least, fairly well exploited on a fundamental basis. – There are those who, on reading-the'above,-wiH'accuse usof'indulging'in-;the-classic forecaster's refuge of hedging. We do not intend it thus. The behavior of the investor at this stage must, it seems to us, depend in large degree on his own inclinations. In view of the risks and rewards being offered at this stage, it would be perfectly plausible in our view for the conservative investor to assume a reasonably defensive position. Whether he should do this depends on whether he can accept with equanimity the possibility of a fairly dynamic speculative upsurge in which he would not be a participant. The aggressive investor, of course, can opt to continue to seek substantial capital gains opportunities in unexploited areas of the market. He, however, must realize that he is accepting a somewhat higher degree of risk than has prevailed in the past. Dow-Jones Industrial (1200 p.m.) 951.38 S&P (1200 p.m.) 107.50 ANTHONYW. TAB ELL AWTmn DELAFIELD, HARVEY, TABELL No !clement or expreuion of opinion or ony other motter here'n contolned IS, or 15 10 be deemed 10 be, directly or indirectly, on offer or the hCltotlon of on offer 10 buy 01 '!.till any !.etUflty fe(erred to or mentIoned The matter IS presel'lled merely for the c.onver'lenoo of thc subscrIber WhIle we belIeve Ihe sources of our Informa tlon to be reliable, we In no way represent or guarantee the accuracy thereof nor of the statements mude here, Any action to be token by the subSCriber should be based an hIS own invcUlgahon ond Informotlon Janney Montgomery coil, Inc, as 0 corporotlon, and Its offIcers or employees, may now have, or may later toke, posihons or Irodes In respect to any secUritIes mentIoned m thl5 or any future Issue, and such poslhon may be dIfferent from any vles now or hereafter expressed In thIS or any other Issue Janney Montgomery Scoll, Inc, whICh IS regIstered wllh the SEC as on Investment adVisor, may gIve adVICe to It mvestment adVISOry ond alhel customers Independently of any statements made In thIS or In ony other Issue FUr/her mformatlOn on ony seOJnly mentIoned herem IS available on request \