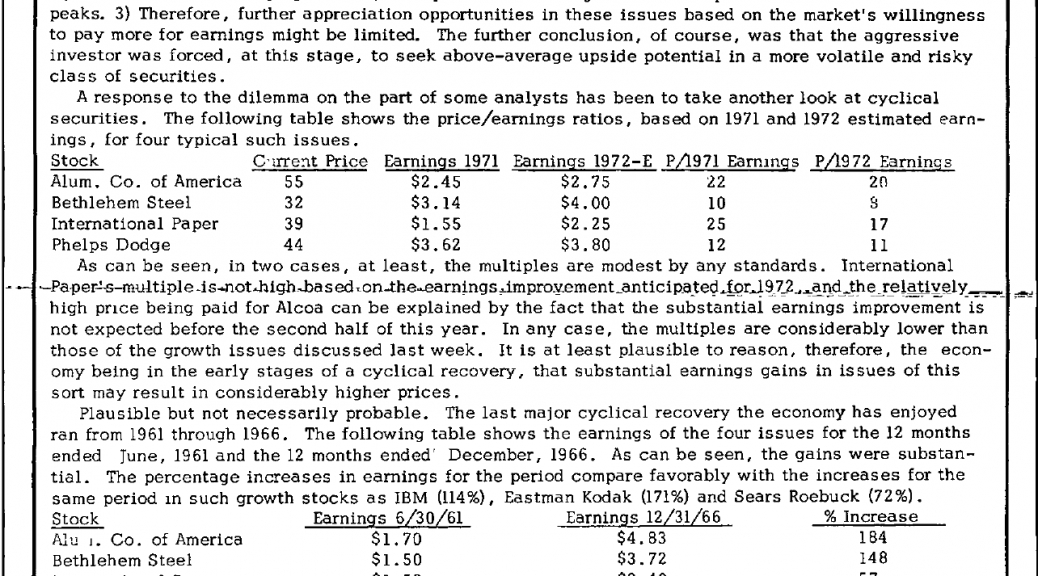 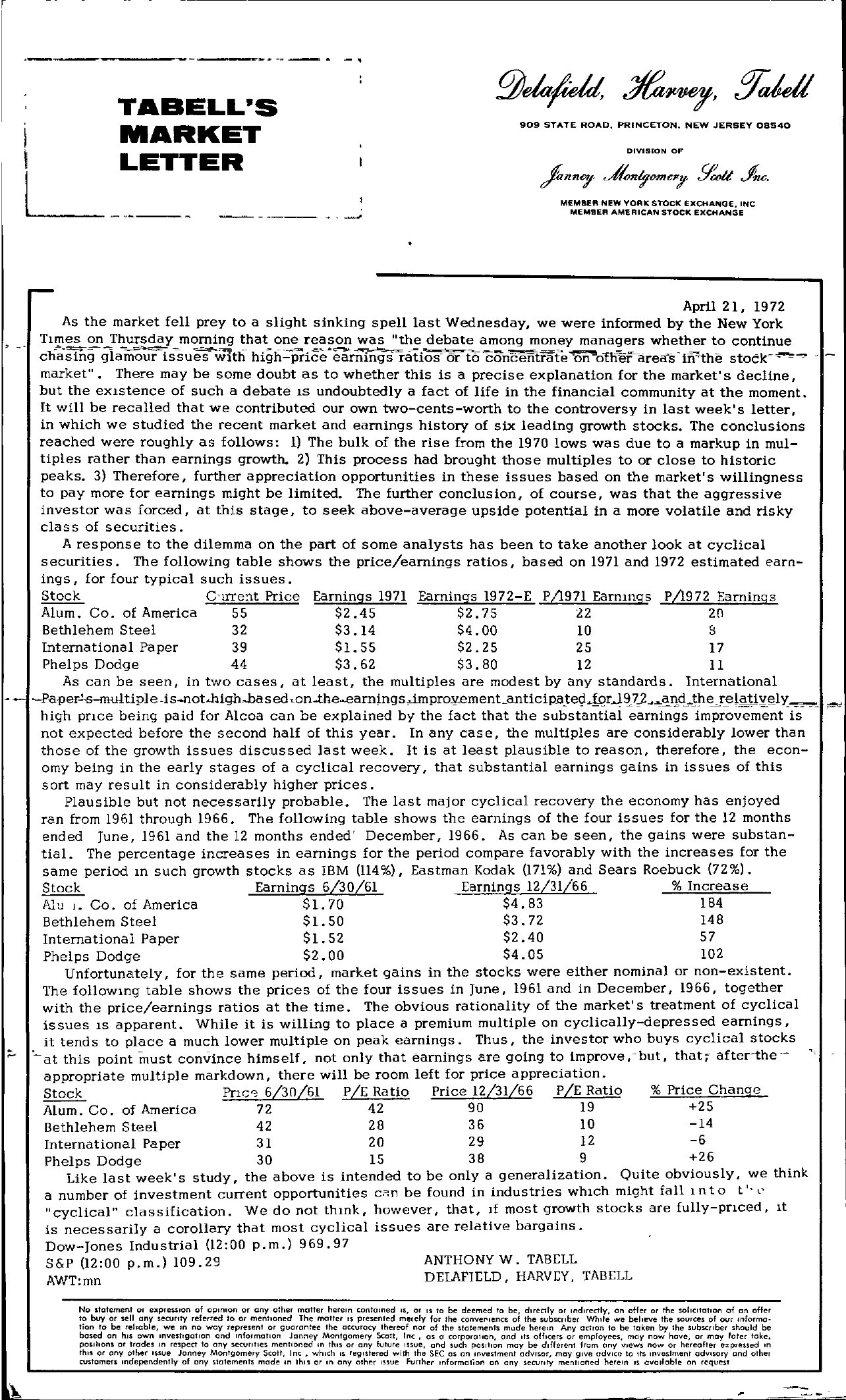 —-. -. -. -. TABELL'S MARKET L..I LETTER 909 STATE ROAD, I'RINCETON. NEW JERSEY 08540 DIVISION OF MEMBER NEW YORK STOCK EXCHANGE, INC MEMBER AMERICAN STOCK EXCHANGE April 21, 1972 As the market fell prey to a slight sinking spell last Wednesday, we were informed by the New York T , rm-ersco-o-ontoT h–ur sd,ay–m orning –… th a t on..-e r ea – son … was t he debate among money '- – . – . . -…. managers whether to continue chasing glamour issues with high-price earnings ratios- or to -concentrate -on orfierarea1; -irr'the stock market. There may be some doubt as to whether this is a precise explanation for the market's decline, but the eXIstence of such a debate IS undoubtedly a fact of life in the financial community at the moment. It will be recalled that we contributed our own two-cents-worth to the controversy in last week's letter, in which we studied the recent market and earnings history of six leading growth stocks. The conclusions reached were roughly as follows 1) The bulk of the rise from the 1970 lows was due to a markup in mul- tiples rather than earnings growth. 2) This process had brought those multiples to or close to historic peaks. 3) Therefore, further appreciation opportunities in these issues based on the market's willingness to pay more for earnings might be limited. The further conclusion, of course, was that the aggressive investor was forced, at this stage, to seek above-average upside potential in a more volatile and risky clas s of securities. A response to the dilemma on the part of some analysts has been to take another look at cyclical securities. The following table shows the price/earnings ratios, based on 1971 and 1972 estimated earn- ings, for four typical such issues. Stock C-lrrelt Price Earnings 1971 Earnings 1972-E P/1971 EarnIngs P/l972 Earninas Alum. Co. of America 55 2.45 2.75 22 20 Bethlehem Steel 32 3.14 4.00 10 8 International Paper 39 1. 55 2.25 25 17 Phelps Dodge 44 3.62 3.80 12 11 As can be seen, in two cases, at least, the multiples are modest by any standards. International -Paper.!.s-mu!tipl e .i snot.high-ba s ed ,0n-the…earningsimprmL8mentanticipaJei.f.Qr.l9).i!.Ild..theJe!atil1.1y. high prIce being paid for Alcoa can be explained by the fact that the substantial earnings improvement is not expected before the second half of this year. In any case, the multiples are considerably lower than those of the growth issues discussed last week. It is at least plausible to reason, therefore, the econ- omy being in the early stages of a cyclical recovery, that substantial earnings gains in is sues of this sort may result in considerably higher prices. Plausible but not necessarily probable. The last major cyclical recovery the economy has enjoyed ran from 1961 through 1966. The following table shows the earnings of the four issues for the 12 months ended June, 1961 and the 12 months ended' December, 1966. As can be seen, the gains were substan- tia!. The percentage increases in earnings for the period compare favorably with the increases for the same period In such growth stocks as IBM (114), Eastman Kodak (171) and Sears Roebuck (72). Stock Earnings 6/30/61 Earnings 12/31/66 Increase Alu I. CO. of America 1. 70 4.83 184 Bethlehem Steel 1. 50 3.72 148 International Paper 1.52 2.40 57 Phelps Dodge 2.00 4.05 102 Unfortunately, for the same period, market gains in the stocks were either nominal or non-existent. The follOWIng table shows the prices of the four issues in June, 1961 and in December, 1966, together with the price/earnings ratios at the time. The obvious rationality of the market's treatment of cyclical issues IS apparent. While it is willing to place a premium multiple on cyclically-depressed earnings, it tends to place a much lower multiple on peak earnings. Thus, the investor who buys cyclical stocks —at this point must convince himself, not only that earnings are going to improve,-but, that; after-the– appropriate multiple markdown, there will be room left for price appreCiation. Stock PrIG! 6/30/61 PiE Ratio Price 12/31/66 PiE Ratio Price Chanqc Alum. Co. of America 72 42 90 19 25 Bethlehem Steel 42 28 36 10 -14 International Paper 31 20 29 12 -6 Phelps Dodge 30 15 38 9 26 Like last week's study, the above is intended to be only a generalization. Quite obviously, we think a number of investment current opportunities can be found in industries whIch might fall 1 n tot '. cyclical classification. We do not thInk, however, that, If most growth stocks are fully-prIced, It is necessarily a corollary that most cyclical issues are relative bargains. Dow-Jones Industrial (1200 p.m.) 969.97 S&P (1200 p.m.) 109.29 AWTmn ANTHONY W. TIIBLLL DELAFILLD, HARVey, TABLLL No statement or exprCUlon of opInion or any other matter herein contained 1, or IS 10 be deemed to be, dlreClly or Indirectly, on offer or the sollcltallon of on offer to buy or sell any security referred to or mentioned The moiler IS presented merely for Ihe convef'lena of the subscriber While we believe Ihe sources of ovr mforma- tion to be rel.able, we In no way represent or guarantee the accuracy thereof nor of the stalements mude herein Any ochon to be laken by the ubscflber should be based on hl own investigation and Information Janney Montgomery Scott, Inc, as 0 corporat.on, and .ts officers or employees, may now have, or may later toke, pOllhons or trades In respect to any seCUrities ment.oned In thiS or any future Issue, and such poslhon may be different from any views now or hereafter expressed In thiS or any other Issue Janney Montgomery Scott, Inc, which IS registered with the SEC as on Investment adVisor, may give adVice to Its Investment odv.so!), and other customen Independently of any statements made In Ihls or In any other Issue Further Information on any security mentioned herein IS aVailable on request —-