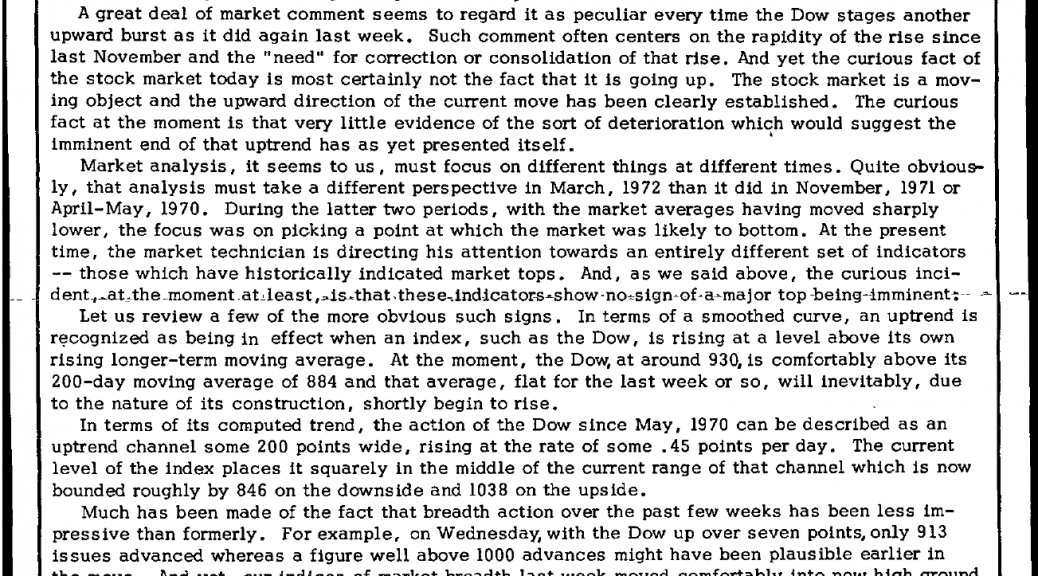 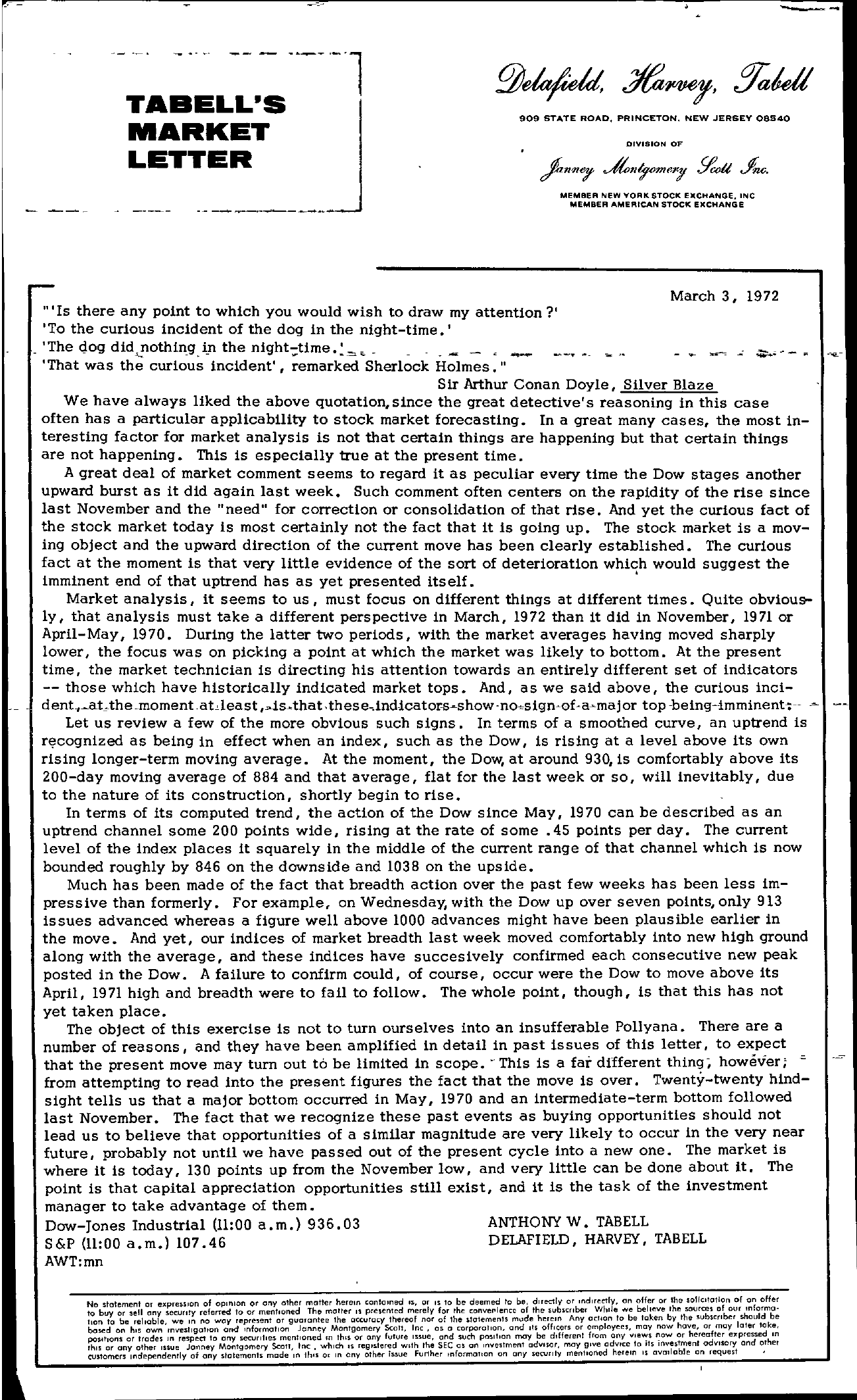 '-'l– – .0- TABELL'S MARKET LETTER – 909 STATE ROAD, PRINCETON. NEW JERSEY 08540 DIVISION OF MEMBER New YORK STOCK EXCHANGE, INC MEMBER AMERICAN STOCK eXCHANGE 'Is there any point to which you would wish to draw my attention' March 3, 1972 'To the curious incident of the dog in the night-time.' 'The dog did-nothingIn the night;time. . .. 'That was the curious incident', remarked Sherlock Holmes. Sir Arthur Conan Doyle, Silver Blaze We have always liked the above quotation,since the great detective's reasoning in this case often has a particular applicability to stock market forecasting. In a great many cases, the most in- teresting factor for market analysis is not that certain things are happening but that certain things are not happening. This is especially true at the present time. A great deal of market comment seems to regard it as peculiar every time the Dow stages another upward burst as it did again last week. Such comment often centers on the rapidity of the rise since last November and the need for correction or consolidation of that rise. And yet the curious fact of the stock market today is most certainly not the fact that it is going up. The stock market is a mov- ing object and the upward direction of the current move has been clearly established. The curious fact at the moment is that very little evidence of the sort of deterioration which would suggest the imminent end of that uptrend has as yet presented itself. Market analysis, it seems to us, must focus on different things at different times. Quite obviou&- ly, that analysis must take a different perspective in March, 1972 than it did in November, 1971 or April-May, 1970. During the latter two periods, with the market averages having moved sharply lower, the focus was on picking a point at which the market was likely to bottom. At the present time, the market technician is directing his attention towards an entirely different set of indicators — those which have historically indicated market tops. And, as we said above, the curious inci- dent,,atthe moment ,at, least ,,is.that, thes e-.indicatorsshow 'nos ign-of-amaj or top -being-imminent— Let us review a few of the more obvious such signs. In terms of a smoothed curve, an uptrend is rcognized as being in effect when an index, such as the Dow, is rising at a level above its own rising longer-term moving average. At the moment, the Dow, at around 930, is comfortably above its 200-day moving average of 884 and that average, flat for the last week or so, will inevitably, due to the nature of its construction, shortly begin to rise. In terms of its computed trend, the action of the Dow since May, 1970 can be described as an uptrend channel some 200 points wide, rising at the rate of some. 45 points per day. The current level of the index places it squarely in the middle of the current range of that channel which is now bounded roughly by 846 on the downSide and 1038 on the upside. Much has been made of the fact that breadth action over the past few weeks has been less im- pressive than formerly. For example, on Wednesday, with the Dow up over seven points, only 913 issues advanced whereas a figure well above 1000 advances might have been plausible earlier in the move. And yet, our indices of market breadth last week moved comfortably into new high ground along with the average, and these indices have succesively confirmed each consecutive new peak posted in the Dow. A failure to confirm could, of course, occur were the Dow to move above its April, 1971 high and breadth were to fail to follow. The whole point, though, is that this has not yet taken place. The object of this exercise is not to turn ourselves into an insufferable Pollyana. There are a number of reasons, and they have been amplified in detail in past issues of this letter, to expect that the present move may turn out t6 be limited in scope. This is a far different thing; however; ,;. from attempting to read into the present figures the fact that the move is over. Twenty-twenty hind- sight tells us that a major bottom occurred in May, 1970 and an intermediate-term bottom followed last November. The fact that we recognize these past events as buying opportunities should not lead us to believe that opportunities of a similar magnitude are very likely to occur in the very near future, probably not until we have passed out of the present cycle into a new one. The market is where it is today, 130 points up from the November low, and very little can be done about it. The point is that capital appreciation opportunities still exist, and it is the task of the investment manager to take advantage of them. Dow-Jones Industrial (1100 a.m.) 936.03 S&P (1100 a.m.) 107.46 ANTHONY W. TABELL DELAFIELD, HARVEY, TAB ELL AWTmn .-,,- – No statement or expreslon of opinion or cny other matter herem contained IS, or IS 10 be deemed to be, dlrec1ly or mdlrectly, on offer or the ollcltotlon of an offer to buy or sell (lny security referred to or menhoned The matter IS presented merely for the convel'lencp of Ihe subscriber While -Ne believe the wurces of our Informa- lion 10 be reliable, we In no way represenl or guarantee the accuracy thereof nor of Ihe statements mude herem Any ocllon 10 be loken by the subscriber should be based on hiS own Invntlgallon and information Janney Montgomery call, Inc, as a corporal lon, and Its officers or employees, may now have, or may laler toke, poSitions or trades In respect 10 any seC\Jrlt.es mentioned In thiS or any future Issue, and such poslhan moy be different from any views now or hereafter elpressed In thiS or any other Issue Janney Montgomery Scali, Inc, which '5 reglslered Wllh the SEC as on ,nvestment adVisor, may give adVice to its investment adVisory and other customers Independently of any statements mode 11'1 thiS or In any other iuue Funher InfOrmaTtOn on any seC\Jflty menlloned herein IS ava,loble on request