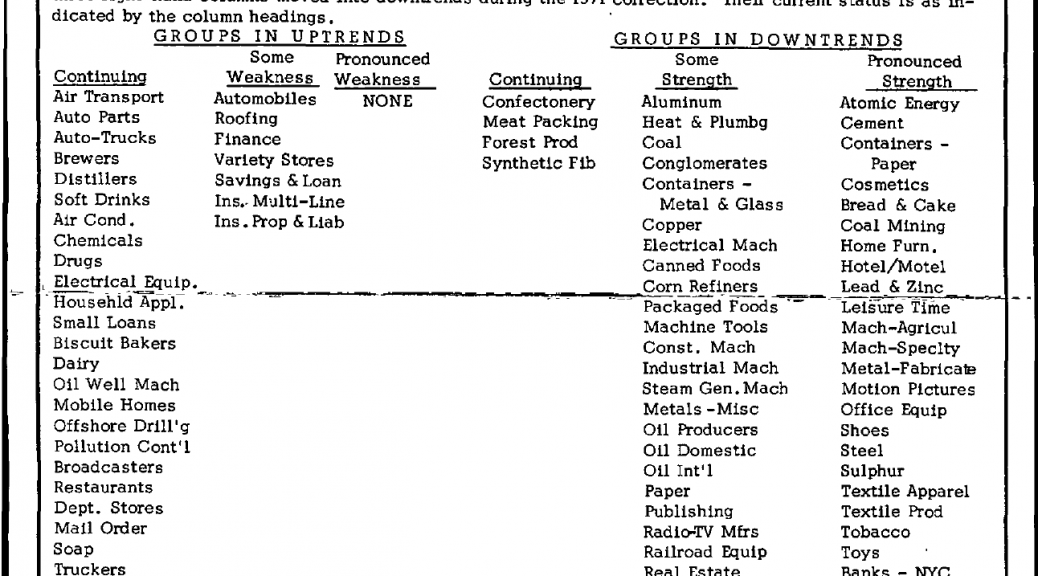 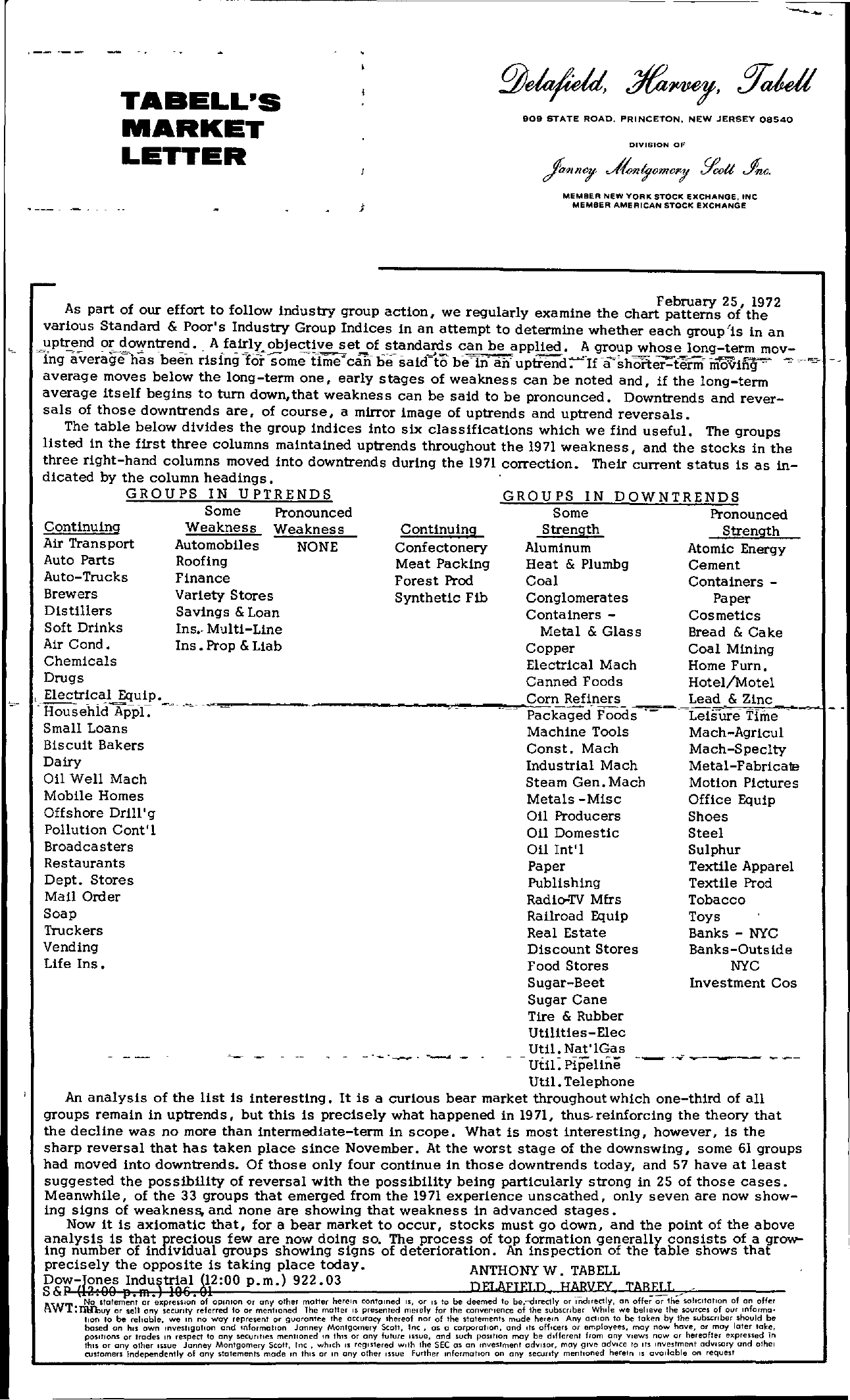 TABELL-S MARKET LETTER J 909 STATE ROAD. PRINCETON, NEW JERSEY 08540 DIVISION OF MEMBER NEW YORI STOCK EXCHANGE, INC MEMBER AMERICAN STOCK EXCHANGE February 2S, 1972 As part of our effort to follow industry group action, we regularly examine the chart patterns of the various Standard & Poor's Industry Group Indices in an attempt to determine whether each group'is in an torup.nd or owntrend . A fairlobje!!ve set of standards can be applied. A group whose long-term mov- fng a-verage-has been rising someflmecall be saidt6 be in- if uptrendIf -ash()rterfriil ili9 – .. .-.. average moves below the long-term one, early stages of weakness can be noted and, if the long-term average itself begins to turn down, that weaknes s can be said to be pronounced. Downtrends and rever- sals of those downtrends are, of course, a mirror image of uptrends and uptrend reversals. The table below divides the group indices into six classifications which we find useful. The groups listed in the first three columns maintained uptrends throughout the 1971 weakness, and the stocks in the three right-hand columns moved into downtrends during the 1971 correction. Their current status is as indicated by the column headings. GROUPS IN UPTRENDS Some Pronounced Continuing Weakness Weakness Air Trans port Auto Parts Automobiles Roofing NONE Auto-Trucks Finance Brewers Distillers Variety Stores Savings & Loan Soft Drinks Air Cond. Chemicals Ins.- Multi-Line Ins. Prop & Liab Drugs ' Electrical Equip. – HousehidAppC — Small Loans Biscuit Bakers Dairy Oil Well Mach Mobile Homes Offshore Drlll' g Pollution Cont'l Broadcasters Restaurants Dept. Stores Mail Order Soap Truckers Vending Life Ins. Continuin!l Confectonery Meat Packing Forest Prod Synthetic Fib GROUPS IN DOWNTRENDS Some Pronounced Stren!lth Streng!h Aluminum Atomic Energy Heat & Plumbg Cement Coal Containers – Conglomerates Paper Containers – Cosmetics Metal & Glass Bread & Cake Copper Coal Mining Electrical Mach Home Fum. Canned Foods Hotel/Motel Corn Refiners Lead & Zinc Packaged Foods . -Leis-ure Time Machine Tools Mach-Agricul Const. Mach Mach-Speclty Industrial Mach Metal-Fabrica1e Steam Gen. Mach Motion Pictures Metals -Misc Office Equip Oil Producers Shoes Oil Domestic Steel Oil Int'l Sulphur Paper Textile Apparel Publishing Textile Prod Radio-TV Mfrs Tobacco Railroad Equip Toys Real Estate Banks – NYC Discount Stores Banks-Outside Food Stores NYC Sugar-Beet Investment Cos Sugar Cane Tire & Rubber ……. . -..i . Utilities-Elec Util. Nat'lGas Util Pipeline ….. —– Util. Telephone An analysis of the list is interesting. It is a curious bear market throughout which one-third of all groups remain in uptrends, but this is precisely what happened in 1971, thus.- reinforcing the theory that the decline was no more than intermediate-term in scope. What is most interesting, however, is the sharp reversal that has taken place since November. At the worst stage of the downswing, some 61 groups had moved into downtrends. Of those only four continue in those downtrends today, and S7 have at least suggested the possibility of reversal with the possibility being particularly strong in 2S of those cases. Meanwhile, of the 33 groups that emerged from the 1971 experience unscathed, only seven are now show- ing signs of weakness, and none are showing that weakness in advanced stages. Now it is axiomatic that, for a bear market to occur, stocks must go down, and the point of the above analysis is that precious few are now doing so. The process of top formation generally consists of a growing number of individual groups showing signs of deterioration. An inspection of the table shows that precisely the opposite is taking place today. ANTHONY W. TAB ELL Dow-Ioes Indu)triaI 1200 p.m.) 922.03 DELAFIELD HARVEY TABEII. S&P (2.99 .m. 196. 1 '. – h- I I If A.WTIl\ll,uyNo statement or expression of opInion Of any olher maHer herein contolned IS, or IS to be deemed 10 be;-(llrectly or mdncc11y, on offer or 1 e 0 1(;ltotlon a on 0 er or sell Clny Ilcunty referred to Or menhoned The molter IS presented merely for Ihe converlenee of the subscriber Wl'ule -He believe the sources of allr informa- tion to be reliable. we ,n no way represent or guarantee Ihe accuracy Ihereof nor of Ine statements mude herein Any oellOn 10 be token by the subscriber should be bosed on hiS own mveu,gohon and Informatton Janney Montgomery Scoh, Inc. as a c;orporallon, and lIS offIcers or employees, may now have, or may laler toke, pOSItions or trades In respect 10 any secutll1es mentioned 11'1 thl! or any future Inue, and such pOSitIon may be dIfferent from any vle now Of hereafter expressed In thl5 or any other Inue Janney Montgomery Scott, Inc, wtch IS regIstered WIth the SEC as on Investment adVIsor, may gIve adVIce to Its Investment adVISOry and othel customers independently of any sfatements mode In thIS or In any other Issue Further InformatIon on any security mentioned herein IS avcllioble on requt