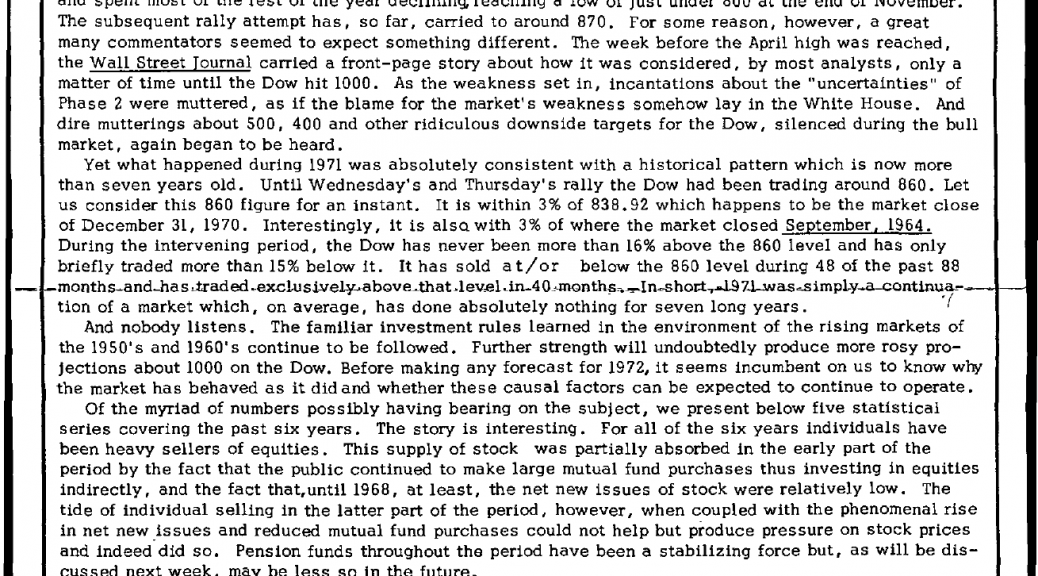 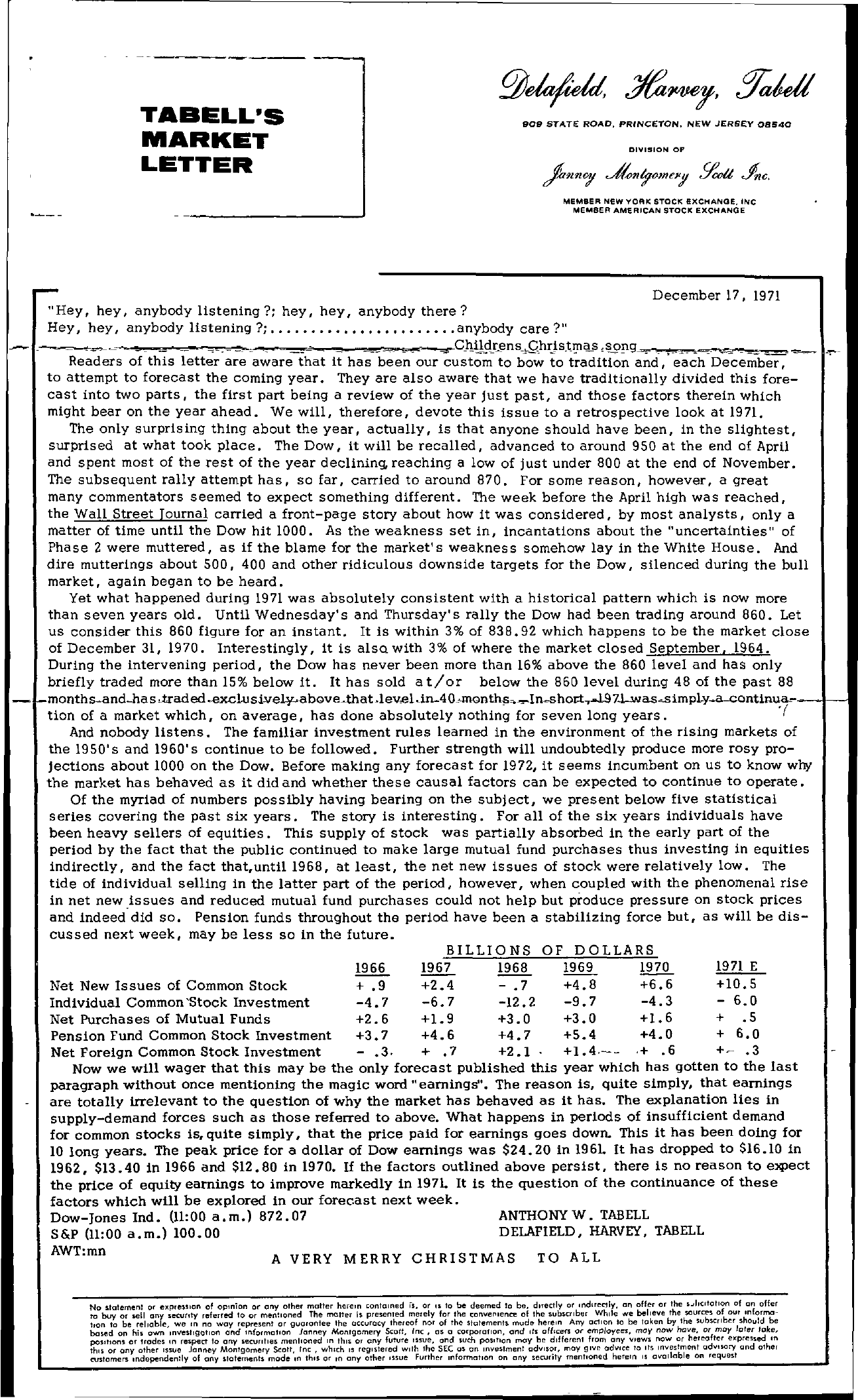 ——— TABELL'S MARKET LETTER J – 909 STATE ROAD, PRINCETON, NEW JERSEY 08540 DIVISION OF MEMBER New VORK STOCK EXCHANGE, INC MEMBER AMERICAN STOCK EXCHANGE Hey, hey, anybody listening; hey, hey, anybody there December 17, 1971 Hey, hey, anybody listening ; ………….. anybody care CJ1JldtensChrislmgs,song Readers of this letter are aware that it has been our usto;;; to b; to taditt;,n ad- a';h-Dece;;ber , – to attempt to forecast the coming year. They are also aware that we have traditionally divided this fore- cast into two parts, the first part being a review of the year just past, and those factors therein which might bear on the year ahead. We will, therefore, devote this issue to a retrospective look at 1971. The only surprising thing about the year, actually, is that anyone should have been, in the slightest, surprised at what took place. The Dow, it will be recalled, advanced to around 950 at the end of April and spent most of the rest of the year declining. reaching a low of just under 800 at the end of November. The subsequent rally attempt has, so far, carried to around 870. For some reason, however, a great many commentators seemed to expect something different. The week before the April high was reached, the Wall Street Journal carried a front-page story about how it was considered, by most analysts, only a matter of time until the Dow hit 1000. As the weakness set in, incantations about the uncertainties of Phase 2 were muttered, as if the blame for the market's weakness somehow lay in the White House. And dire mutterings about 500, 400 and other ridiculous downside targets for the Dow, silenced during the bull market, again began to be heard. Yet what happened during 1971 was absolutely consistent with a historical pattern which is now more than seven years old. Until Wednesday's and Thursday's rally the Dow had been trading around 860. Let us consider this 860 figure for an instant. It is within 3 of 838.92 which happens to be the market close of December 31, 1970. Interestingly, it is alsQ with 3 of where the market closed September, 1964. During the intervening period, the Dow has never been more than 16 above the 860 level and has only briefly traded more than 15 below it. It has sold a t / or below the 860 level during 48 of the past 88 r-monthsandhasctraded.excLusi-velyabovethat.level.inAO.monthsIn-shott7…l!l7J.-was..simpl-y-a-continuik—t- tion of a market which, on average, has done absolutely nothing for seven long years. .( And nobody listens. The familiar investment rules learned in the environment of the rising markets of the 1950' sand 1960' s continue to be followed. Further strength will undoubtedly produce more rosy pro- jections about 1000 on the Dow. Before making any forecast for 1972, it seems incumbent on us to know why the market has behaved as it did and whether these causal factors can be expected to continue to operate. Of the myriad of numbers possibly having bearing on the subject, we present below five statistical series covering the past six years. The story is interesting. For all of the six years individuals have been heavy sellers of equities. This supply of stock was partially absorbed in the early part of the period by the fact that the public continued to make large mutual fund purchases thus investing in equities indirectly, and the fact that,untIl1968, at least, the net new issues of stock were relatively low. The tide of individual selling in the latter part of the period, however, when coupled with the phenomenal rise in net new Issues and reduced mutual fund purchases could not help but produce pressure on stock prices and indeed did so. Pension funds throughout the period have been a stabilizing force but, as will be dis- cussed next week, may be less so in the future. BILLIONS OF DOLLARS 1971 E Net New Issues of Common Stock .9 2.4 – .7 4.8 6.6 10.5 Individual Common'Stock Investment -4.7 -6.7 -12.2 -9.7 -4.3 – 6.0 Net Purchases of Mutual Funds 2.6 1. 9 3.0 3.0 1. 6 .5 Pension Fund Common Stock Investment 3.7 4.6 4.7 5.4 4.0 6.0 Net Foreign Common Stock Investment – .3. .7 2.1 1.4.–..6 – .3 Now we will wager that this may be the only forecast published this year which has gotten to the last paragraph without once mentioning the magic word earnings. The reason is, quite simply, that earnings are totally irrelevant to the question of why the market has behaved as it has. The explanation lies in supply-demand forces such as those referred to above. What happens in periods of insufficient demand for common stocks is, quite simply, that the price paid for earnings goes down. This it has been dOing for 10 long years. The peak price for a dollar of Dow earnings was 24.20 in 196L It has dropped to 16.10 in 1962, 13.40 in 1966 and 12.80 in 1970. If the factors outlined above perSist, there is no reason to eJqlect the price of equity earnings to improve markedly in 197L It is the question of the continuance of these factors which will be explored in our forecast next week. DOW-Jones Ind. (1100 a.m.) 872.07 S&P (1100 a.m.llOO.OO ANTHONY W. TABELL DELAFIELD, HARVEY, TABELL AWTmn A VERY MERRY CHRISTMAS TO ALL No statement or expression of opinion or any other matter herein contolned is, or ,s to be deemed to be, directly Of ,ndlrectly. an offer or the 5..ll(ltotlon of on offer to buy or l.ell any security referred 10 or mentioned The mOlter Is presented merely for the conVel'lence of the subscriber While we believe the sources of our Informalion to be reliable, we In no way represent or guarantee Ihe accuracy thereof nor of the statements mude herem Any action to be token by the subSCriber should be boud on his own InYeshgotlon ond information Janney Montgomery ScaN, Inc, as 0 corporal lon, and lIs officers or employees, may now hove, or moy lofer toke, posItions or trades In respect to any s.ecutltles mentioned In thiS or ony future Issue, and wch poSition may be different from any views now or hereofter e)(pressed In thiS or any other Issue Jonney Montgomery Scott, Inc, which IS registered With the SEC as on Investment adVisor, may give adVice to Its mvestment adVISOry and othel customers independently of any statements mode In thiS or In any other Issue Further Information on any security mentlolled herem IS available all request