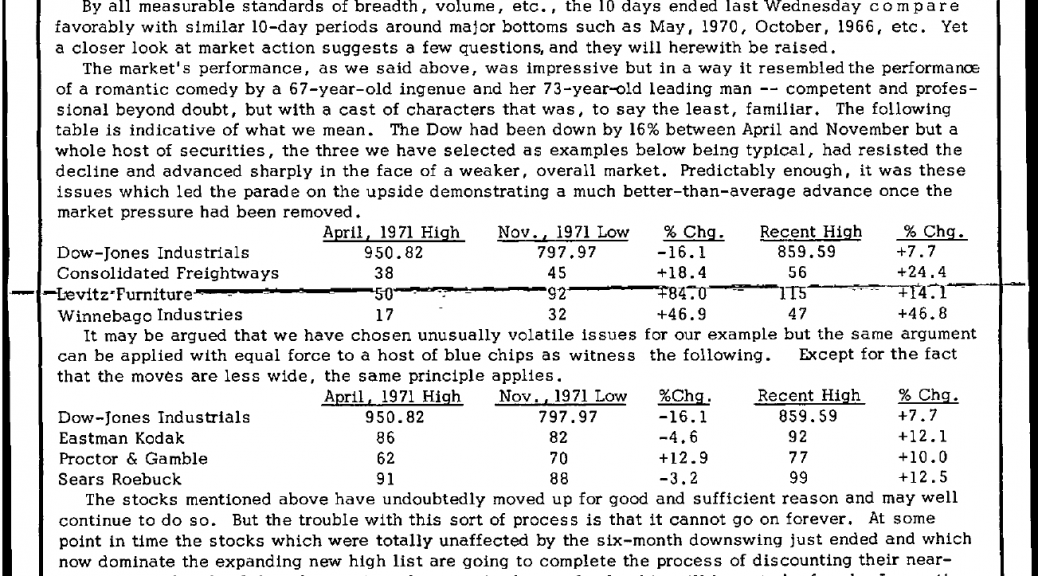 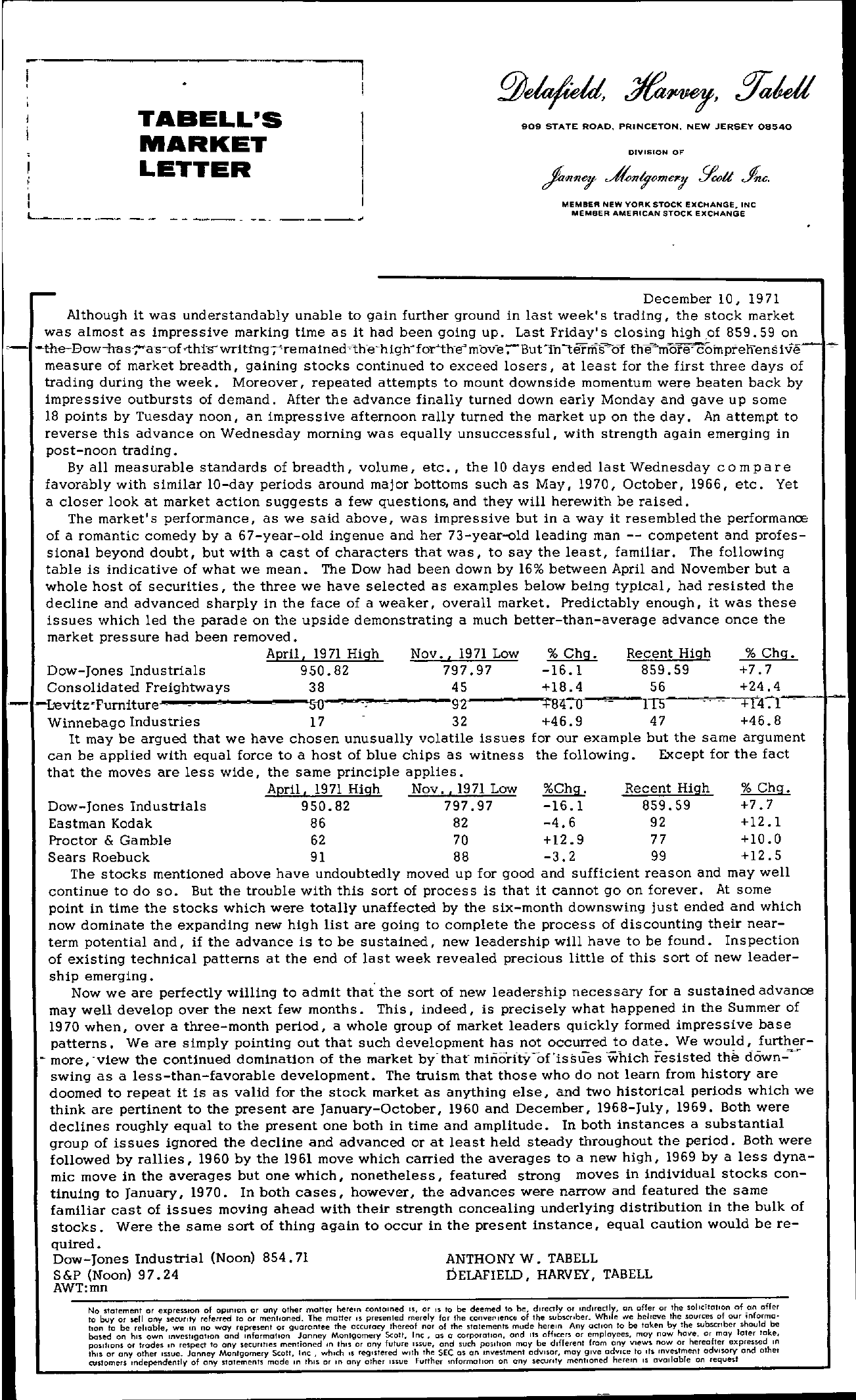 TABELL'S MARKET LETTER ,,L' , 909 STATE ROAD, PRINCETON. NEW JERSEY 08540 DIYISION OF MEMBER NEW YORK STOCK eXCHANGE, INC MEMBER AMERICAN STOCK eXCHANGE December 10, 1971 Although it was understandably unable to gain further ground in last week's trading, the stock market was almost as impressive marking time as it had been going up. Last Friday's closing high ,of 859.59 on , – -the-Bow-has7a-s-of etht. wrtttng;-'remained-the'high forthe' mbv-e-But -ih-term-S''oI tlleniOre- coinpteliens ive- – measure of market breadth, gaining stocks continued to exceed losers, at least for the first three days of trading during the week. Moreover, repeated attempts to mount downside momentum were beaten back by impressive outbursts of demand. After the advance finally turned down early Monday and gave up some 18 pOints by Tuesday noon, an impressive afternoon rally turned the market up on the day. An attempt to reverse this advance on Wednesday morning was equally unsuccessful, with strength again emerging in post-noon trading. By all measurable standards of breadth, volume, etc., the 10 days ended last Wednesday com par e favorably with similar 10-day periods around major bottoms such as May, 1970, October, 1966, etc. Yet a closer look at market action suggests a few questions, and they will herewith be raised. The market's performance, as we said above, was impressive but in a way it resembled the performanc of a romantic comedy by a 67-year-old ingenue and her 73-year-old leading man — competent and profes- sional beyond doubt, but with a cast of characters that was, to say the least, familiar. The following table is indicative of what we mean. The Dow had been down by 16 between April and November but a whole host of securities, the three we have selected as examples below being typical, had resisted the decline and advanced sharply in the face of a weaker, overall market. Predictably enough, it was these issues which led the parade on the upside demonstrating a much better-than-average advance once the market pressure had been removed. April, 1971 High Nov., 1971 Low Chg. Recent High Chg. Dow-Tones Industrials 950.82 797.97 -16.1 859.59 7.7 – -LCvointszo'lFiudrantietdurFere-ig htways — 38 5-0 – 45 18.4 56 24.4 92 84-0 – ITS — — 14-1.–4— Winnebago Industries 17 – 32 46.9 47 46.8 It may be argued that we have chosen unusually volatile issues for our example but the same argument can be applied with equal force to a host of blue chips as witness the following. Except for the fact that the moves are less wide, the same principle applies. April, 1971 High Nov., 1971 Low Chg. Recent High Chg. Dow-Tones Industrials Eastman Kodak 950.82 86 797.97 82 -16.1 -4.6 859.59 92 7.7 12.1 Proctor & Gamble 62 70 12.9 77 10.0 Sears Roebuck 91 88 -3.2 99 12.5 The stocks mentioned above have undoubtedly moved up for good and sufficient reason and may well continue to do so. But the trouble with this sort of process is that it cannot go on forever. At some point in time the stocks which were totally unaffected by the six-month downswing just ended and which now dominate the expanding new high list are gOing to complete the process of discounting their near- term potential and, if the advance is to be sustained, new leadership will have to be found. Ins pection of existing technical patterns at the end of last week revealed precious little of this sort of new leader- ship emerging. Now we are perfectly willing to admit that'the sort of new leadership necessary for a sustained advance may well develop over the next few months. This, indeed, is precisely what happened in the Summer of 1970 when, over a three-month period, a whole group of market leaders quickly formed impressive base patterns. We are simply pointing out that such development has not occurred to date. We would, further- more, -view the continued domination of the market by-that- miiic'-ritY'of 'is su-es which resisted the down- swing as a less-than-favorable development. The truism that those who do not learn from history are doomed to repeat it is as valid for the stock market as anything else, and two historical periods which we think are pertinent to the present are Tanuary-October, 1960 and December, 1968-Tuly, 1969. Both were declines roughly equal to the present one both in time and amplitude. In both instances a substantial group of issues ignored the decline and advanced or at least held steady throughout the period. Both were followed by rallies, 1960 by the 1961 move which carried the averages to a new high, 1969 by a less dyna- mic move in the averages but one which, nonetheless, featured strong moves in individual stocks con- tinuing to Tanuary, 1970. In both cases, however, the advances were narrow and featured the same familiar cast of issues moving ahead with their strength concealing underlying distribution in the bulk of stocks. Were the same sort of thing again to occur in the present instance, equal caution would be re- quired. Dow-Tones Industrial (Noon) 854.71 ANTHONY W. TABELL S&P (Noon) 97.24 AWTmn DELAFIELD, HARVEY, TABELL No sfolemen! or expression of opInion or any other motter herein cantolned IS, or 15 to be deemed to be, directly or indirectly, on offer or Ihe solicitation af .on offer to buy Of sell any security referred to or menlloned. The matter 15 presented merely for Ihe converlence of the subscrober. While we believe the sources of our mfarma tlon 10 be reliable, we m no way represent or guarantee the accuracy thereof nor of the statements mode herem Any aellon 10 be token by Ihe subSCriber should be based on hiS own IOvesllgo1ton and Information Janney Montgomery Scolt, Inc, as a corporation, and Its officers or employees, may now have, or may later take, POSitions or trades m respect to any SeCUrities mentioned on thiS or any future Issue, and such pOSlhon may be different from any views now or hereafter expressed on thiS or any other Issue. Janney Montgomery Scott, Inc, wtllch ' regIStered With the SEC as on onvestment adVisor, may give adVice to Its onvestment adVISOry and olhel customers ,ndependently of any statements made m thiS or m any other Issue Further onformatlon on any security menhoned herem IS available on request