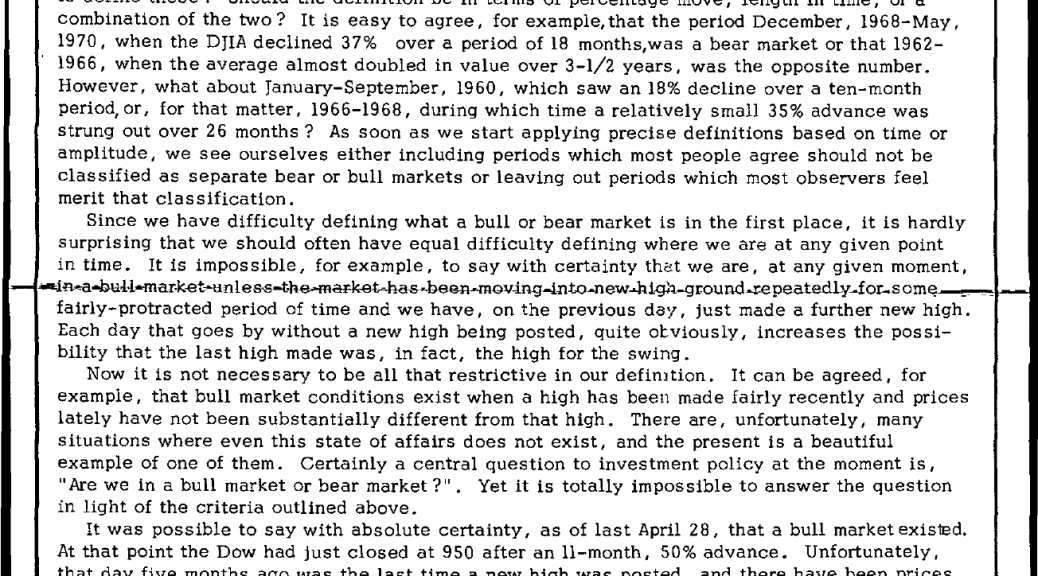 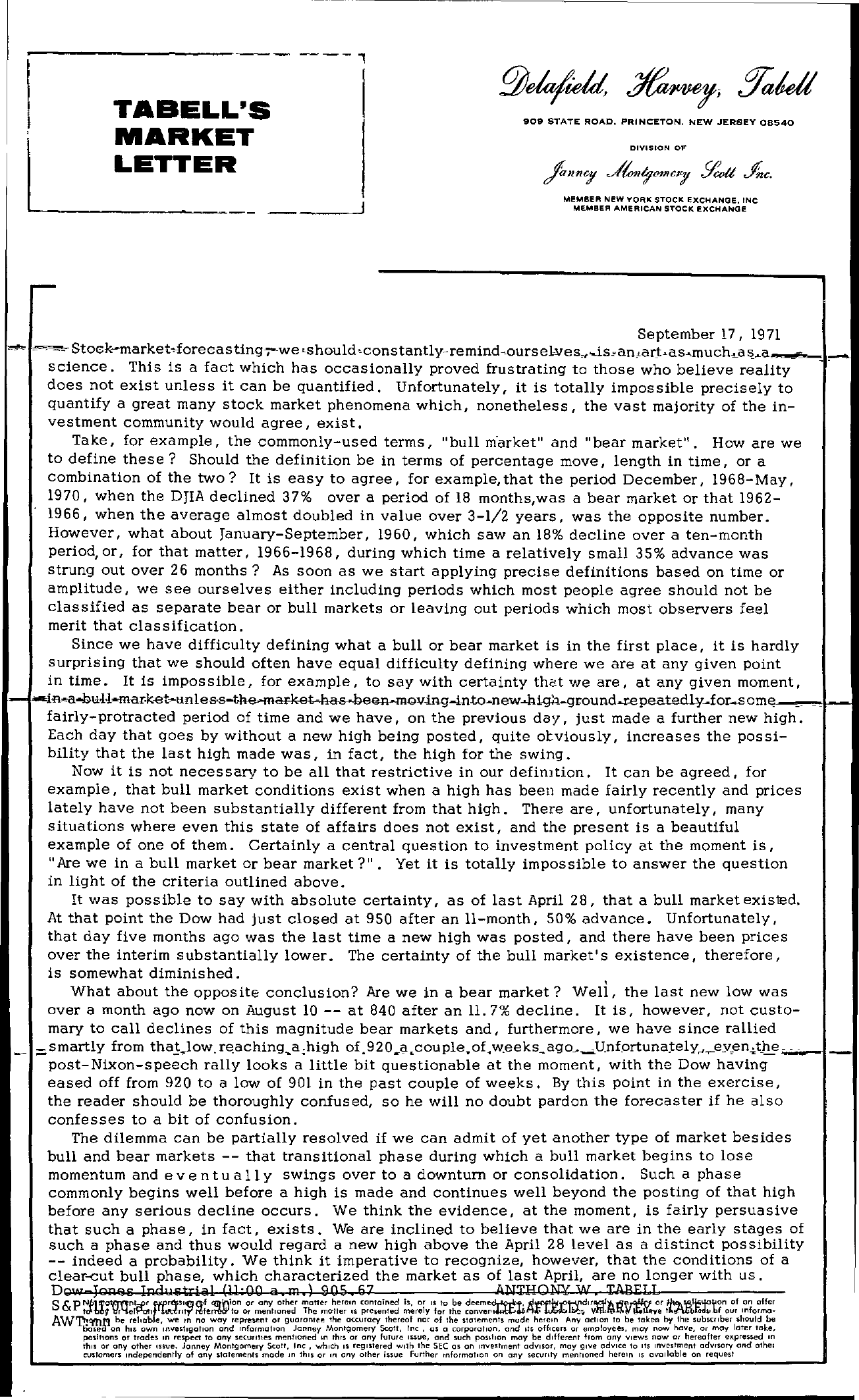 ————- —, TABELL'S MARKET LETTER 909 STATE ROAD, PRINCETON, NEW JERSEY 08540 DIVISION OF MEMBER NEW YORK STOCK EXCHANGE, INC MEMBER AMeRICAN STOCK eXCHANGe September 17, 1971 f,. Stoek-market.,foreeasting7we cS hould'cons tantly remind-oursetves,is, an,art.asmucha a .. science. This is a fact which has occasionally proved frustrating to those who believe reality does not exist unless it can be quantified. Unfortunately, it is totally impossible precisely to quantify a great many stock market phenomena which, nonetheless, the vast majority of the in- vestment community would agree, exist. Take, for example, the commonly-used terms, bull m-arket and bear market. How are we to define these Should the definition be in terms of percentage move, length in time, or a combination of the two It is easy to agree, for example, that the period December, 1968-May, 1970, when the DJIA declined 37 over a period of 18 months,was a bear market or that 1962- 1966, when the average almost doubled in value over 3-1/2 years, was the opposite number. However, what about January-September, 1960, which saw an 18 decline over a ten-month period, or, for that matter, 1966-1968, during which time a relatively small 35 advance was strung out over 26 months As soon as we start applying precise definitions based on time or amplitude, we see ourselves either including periods which most people agree should not be classified as separate bear or bull markets or leaving out periods which most observers feel merit that classification. Since we have difficulty defining what a bull or bear market is in the first place, it is hardly surprising that we should often have equal difficulty defining where we are at any given point in time. It is impossible, for example, to say with certainty that we are, at any given moment, 1 – -iR-b,J.I-mar-k-et-linles-s-t-le.-m-mQv-ing–into-new.hig!l.ground.xepeatedLyforsome…..—tl-II fairly-protracted period of time and we have, on the previous day, just made a further new high. Each day that goes by without a new high being posted, quite otviously, increases the pOSSi- bility that the last high made was, in fact, the high for the swing. Now it is not necessary to be all that restrictive in our defimtion. It can be agreed, for example, that bull market conditions exist when a high has been made fairly recently and prices lately have not been substantially different from that high. There are, unfortunately, many situations where even this state of affairs does not exist, and the present Is a beautiful example of one of them. Certainly a central question to investment policy at the moment is, Are we in a bull market or bear market. Yet it is totally impossible to answer the question in light of the criteria outlined above. It was possible to say with absolute certainty, as of last April 28, that a bull market exis1Ed. At that pOint the Dow had just closed at 950 after an ll-month, 50 advance. Unfortunately, that day five months ago was the last time a new high was posted, and there have been prices over the interim substantially lower. The certainty of the bull market's existence, therefore, is somewhat diminished. What about the opposite conclUSion Are we in a bear market Well, the last new low was over a month ago now on August 10 — at 840 after an 11.7 decline. It is, however, not custo- mary to call declines of this magnitude bear markets and, furthermore, we have since rallied smartly from tha!)ow.reachinga;high of.920a.couple.of.weeksago…….Unfortuna.tely,eyenAhe………..— post-Nixon-speech rally looks a little bit questionable at the moment, with the Dow having eased off from 920 to a low of 901 in the past couple of weeks. By this pOint in the exercise, the reader should be thoroughly confused, so he will no doubt pardon the forecaster if he also confesses to a bit of confusion. The dilemma can be partially resolved if we can admit of yet another type of market besides bull and bear markets — that tranSitional phase during which a bull market begins to lose momentum and eve n t u all y swings over to a downturn or consolidation. Such a phase commonly begins well before a high is made and continues well beyond the posting of that high before any serious decline occurs. We think the evidence, at the moment, is fairly persuasive that such a phase, in fact, exists. We are inclined to believe that we are in the early stages of such a phase and thus would regard a new high above the April 28 level as a distinct possibility — indeed a probability. We think it imperative to recognize, however, that the conditions of a clear-cut bull phase, which characterized the market as of last April, are no longer with us. Dour JQR'ilS IAQ1!&triEll (UOQ a. me) 90S. 57 A;WTMOJY 3'. T41lElL S &P Nblllltottrl'lntpT wP rq;slQQf cm,lon or any other matter herem contained is, or IS to be deeme, 1,l'lf()ftW..oHndlr1I.rif or Ht4oIi40on of on offer AWTI'rrntqtd-M1 'drielPcmt'!etl-ntT' f!fo Or mentioned The motter IS presented merely for the converIMtr6.liJ1,l; L..L-k.Jblr, vilLU.WIte1leve I'.bi our mformo- be reliable, we In no way represent or guarantee 'he accuracy thereof nor of the statements mude herem Any aellon to be token by the subSCriber should be ooseaon hIS own Investlgotlon and mformatlon Janney Montgomery Scali, Inc, as a corporation, and Its officers or employees, may now have, or may later toke, positIons or trades m respect to any securities mentioned m thiS or ony futufe Issue, and such posliion may be different from any views now or hereafter expressed m thiS or any other Issue. Janney Montgomery Scott, Inc, which IS registered With the SEC as on II'lvestment adVisor, may give adVice to Its II'lv(!slment adVISOry and othel customers Independently of ony statements mode In Ihls or In any other inue Further Informahon on any security mentioned herein IS available on request