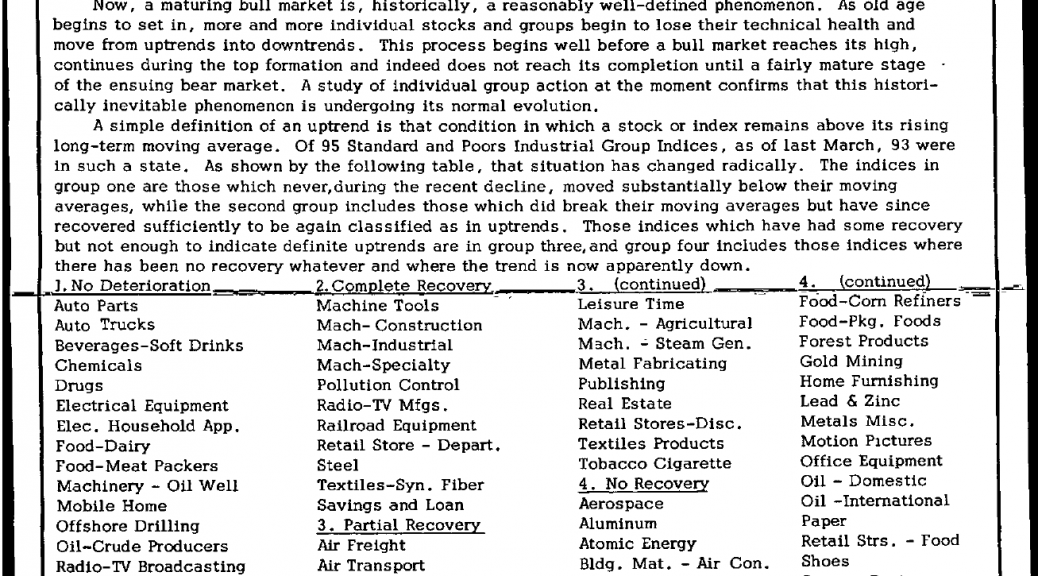 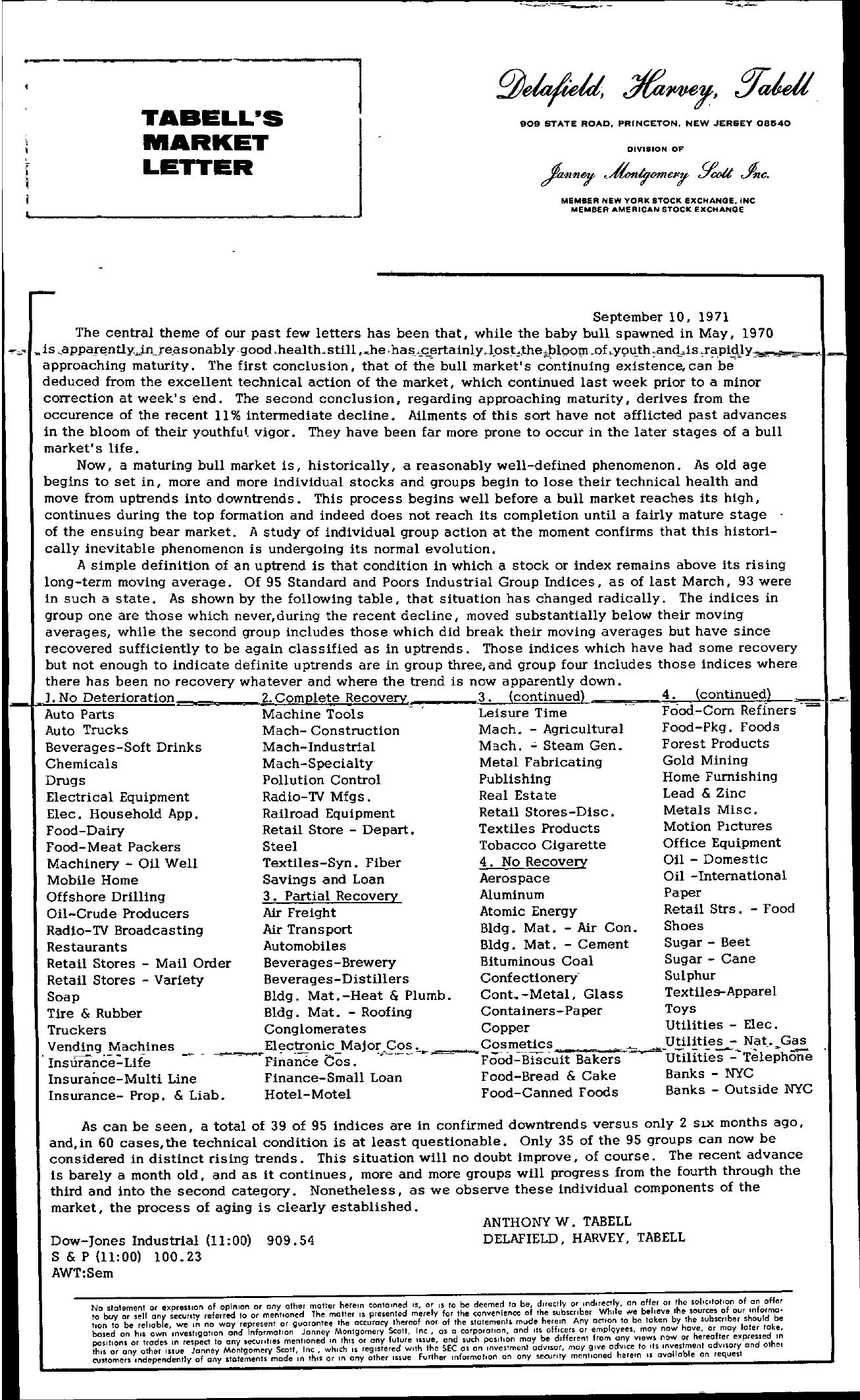 ———————————— TABELL'S MARKET LETTER 909 STATE ROAD, PRINCETON, NEW .JERSEY 08540 DIVISION OF MEMBER NEW YORI( STOCK eXCHANGE, INC MEMBER AMERICAN STOCK EXCHANGE September 10, 1971 The central theme of our past few letters has been that, while the baby bull spawned in May, 1970 the is .apparentlyinJeas onably ,good .health.still ,he .hascertainly.Iostthe,bloom .OJ .Y9l!tn ,arlq.ls Jal,p1llPf,I approaching maturity. The first conclusion, that of bull ma;kt' s ;';ntin;'ing existence. can deduced from the excellent technical action of the market, which continued last week prior to a minor correction at week's end. The second conclUSion, regarding approaching maturity, derives from the occurence of the recent II intermediate decline. Aliments of this sort have not afflicted past advances in the bloom of their youthful, vigor. They have been far more prone to occur in the later stages of a bull market's life. Now, a maturing bull market is, historically, a reasonably well-defined phenomenon. As old age begins to set in, more and more individual stocks and groups begin to lose their technical health and move from uptrends into downtrends. This process begins well before a bull market reaches its high, continues during the top formation and indeed does not reach its completion until a fairly mature stage of the ensuing bear market. A study of individual group action at the moment confirms that this histori- cally inevitable phenomenon is undergoing its normal evolution. A simple definition of an uptrend is that condition in which a stock or index remains above its rising long-term moving average. Of 95 Standard and Poors Industrial Group Indices, as of last March, 93 were in such a state. As shown by the following table, that situation has changed radically. The indices in group one are those which never, during the recent decline, moved substantially below their moving averages, while the second group includes those which did break their moving averages but have since recovered sufficiently to be again classified as in uptrends. Those indices which have had some recovery but not enough to indicate definite uptrends are in group three, and group four includes those indices where there has been no recovery whatever and where the trend is now down. Auto Parts Machine Tools Leisure Time Auto Trucks Mach- Construction Mach. – Agricultural Food-Pkg. Foods Beverages-Soft Drinks Mach-Industrial Mch. Steam Gen. Forest Products Chemicals Mach-Specialty Metal Fabricating Gold Mining Drugs Pollution Control Publishing Home Furnishing Electrical Equipment Radio-TV Mfgs. Real Estate Lead & Zinc Elec. Household App. Railroad Equipment Retail Stores-Disc. Metals Misc. Food-Dairy Retail Store – Depart. Textiles Products Motion PIctures Food-Meat Packers Steel Tobacco Cigarette Office Equipment Machinery – Oil Well Textiles-Syn. Fiber 4. No Recovery Oil – Domestic Mobile Home Savings and Loan Aerospace Oil -International Offshore Drilling 3. Partial Recovery Aluminum Paper Oil-Crude Producers Air Freight Atomic Energy Retail Strs. – Food Radio- TV Broadcasting Air Trans port Bldg. Mat. – Air Con. Shoes Restaurants Automobiles Bldg. Mat. – Cement Sugar – Beet Retail Stores – Mail Order Beverages-Brewery Bituminous Coal Sugar – Cane Retail Stores – Variety Beverages-Distillers Confectionery' Sulphur Soap Bldg. Mat.-Heat & Plumb. Cont.-Metal, Glass Textiles-Apparel Tire & Rubber Bldg. Mat. – Roofing Containers-Paper Toys Truckers Conglomerates Copper Utilities – Elec. Vending Machines InsuranceLife . EI'!'ctronicMajor2. , Csmtics U t i l i t ie s-' Nat. Gas – s. ….- Finance Cos. Food-Biscuit Bakers Utilities – Telephone Insurance-Multi Line Insurance- Prop. & Liab. Finance-Small Loan Hotel-Motel Food-Bread & Cake Food-Canned Foods Banks – NYC Banks – Outside NYC As can be seen, a total of 39 of 95 indices are in confirmed downtrends versus only 2 SlX months ago, and, in 60 cases, the technical condition is at least questionable. Only 35 of the 95 groups can now be considered in distinct rising trends. This situation will no doubt improve, of course. The recent advance is barely a month old, and as it continues, more and more groups will progress from the fourth through the third and into the second category. Nonetheless, as we observe these individual components of the market, the process of aging is clearly established. ANTHONY W. TABELL Dow-Jones Industrial (1100) 909.54 DELAFIELD, HARVEY, TABELL S&P(1100) 100.23 AWTSem No statement or exprClSSlon of opinion or any other motter herein contOlned IS, or IS 10 be deemed 10 be, directly or mdlrectly, on offer or the sollcltotlon of on offer to buy or sell onr. security referred to or mentioned The mOiler IS presented merely for the convelfenCfJ of the subscriber While Ne believe the sources of our Informo lion to be rei lob e, we In no way represent or guarantee the accuracy thereof nor of the stotemena mude herein Any action to be token by the subscTlber should be based on t1l1 own investigation and Information Janney Montgomery coli, Inc, as 0 corporation, and 115 officers or emplQyees, may now have, or may laler loke, positions or trades In respect to any secuntles menhoned In Ihls or any future Issue, and such poslhon may be different from any vieWs now or hereafter expressed m thIS or any other Issue Janney Montgomery Scott, Inc, whllh IS registered With the SEC as on Investment adVisor, may give adVice to Its Investment odvlsory ond othel C\lstomers Independently of any stolements mode In thiS or In any other Issue Further information on any secuTity menTioned herein IS ovalloble on request